Heidsieck Monopole Gout American 1907 is the world’s most expensive champagne. Or so it is often touted.

Well, that really depends on where you buy it. And, yes, it is still available, though in tiny quantities and rarely seen. A few special stores (a quick google will direct you) or the secondary market is the best bet if you do want to try it.

This is the famous “shipwreck champagne” and it has a truly extraordinary story to tell, much more interesting than simply the prices it has achieved. 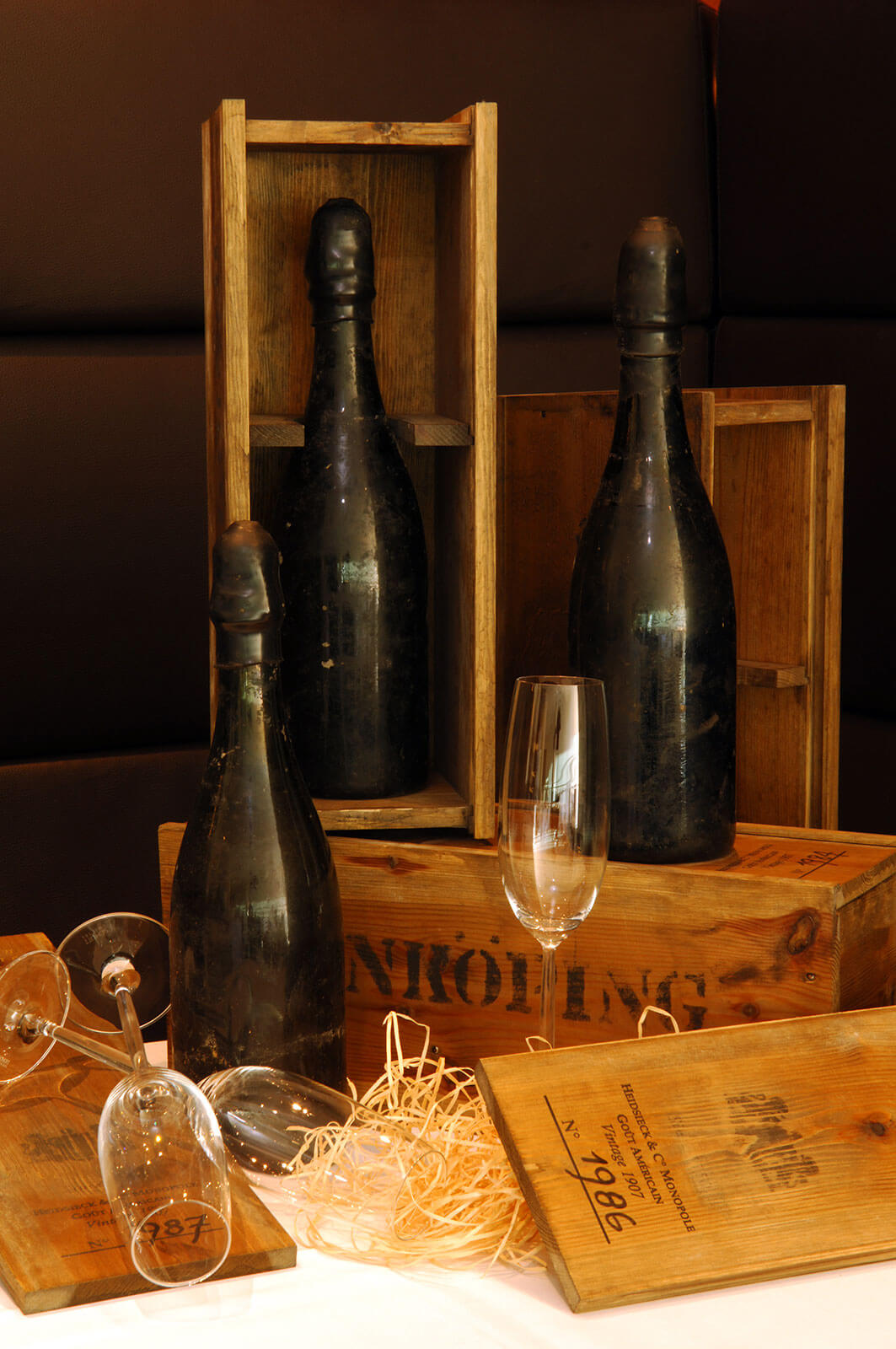 There have been endless stories about buyers cornering the market, many of them now urban myths of nearly legendary proportions. One story suggests that Caviar House swooped in and purchased around 2,000 bottles for $3,000,000.

If so, then the owners really should crack a few to celebrate one of the century’s great heists (we probably should say investments). The Ritz-Carlton in Moscow got hold of around a dozen and was offering them for around $35,000 each; apparently at a subsequent auction, the price for a bottle reached a staggering $275,000. The world’s most expensive champagne indeed.

But perhaps it does not have to be. A search today on the internet reveals that you can still find a bottle or two if you are keen for a much more reasonable AUD$6,000 to AUD$8,000 per bottle.

Rare they might now be, but when these champagne bottles were discovered, there were 3,000 of them (around 500 apparently did not make the grade, I believe). So not quite unicorn status.

Quite why one would pay more than a quarter of a million dollars for something you could get, after three minutes’ research, for a few grand is beyond me but then some might think paying anything for a dodgy old barnacle-covered bottle of questionable fizz is just as incomprehensible.

By chance, this same wine, same vintage, also went down on the Titanic – not sure I’d want a bottle near a kayak with that track record.

The house of Heidsieck was founded in 1785 by Florens-Louis Heidsieck.

The three Heidsieck houses – this one, Piper, and Charles – have all been intertwined to varying degrees over their histories. These days, this is the least well known of them.

Life for these bottles started out in a largely unremarkable manner. The year was 1916, and the Russian market prior to the revolution was a very healthy one for a number of houses – Louis Roederer and Veuve Clicquot especially.

These bottles of Heidsieck from the 1907 vintage were apparently being smuggled to Russia, or delivered to the Russian army, or destined for Tsar Nicolas I himself, depending on which source one believes, along with several barrels of cognac and wine (which did not survive) on the Swedish schooner Jönköping.

On the morning of November 3, 1916 the Jönköping was discovered by U22, a German submarine, off the coast of Finland. The U-boat’s commander apparently had somewhat of a checkered career, going from the German navy’s golden boy to banishment in the Baltic, condemned to chasing smuggling vessels. Seems he is the only German naval commander of any type of craft to sink another German boat, even if he did so by accident.

Rubbing salt in the wound, the commander of the U-Boot he sank was his childhood best friend.

It seems to have been a bit of a comedy of errors all round as the captain of Jönköping had spotted the submarine earlier, but thought it was an island. He had been riding his luck; this was the schooner’s tenth trip of the year taking contraband to Russia.

To its credit, U22 surfaced near the Jönköping, refusing all pleas and bribes of booze and giving the crew the opportunity to dump its illicit cargo over the side before the ship was sunk by explosives and the crew taken to port.

And that, as far as anyone ever imagined, was the last that would be ever heard of the champagne (although the sailors left on board to set the explosives before rowing back to the sub did allegedly grab a few bottles).

In 1997, a Swedish salvage team located the sunken ship and its precious cargo. But could the wine possibly still be drinkable, let alone good? Turns out, and some wine producers are actually replicating the conditions to see how their own wines age, that the decades AWOL underwater appear to have been nearly perfect cellaring conditions.

Having settled in Baltic Sea silt at an estimated 60 to 65 meters below the surface, the bottles lay undisturbed for more than 80 years. Serendipitously, the pressure at 60 meters is around six atmospheres, almost identical to that in a bottle of champagne – in other words, the pressure inside and out was almost equal so there was no issue in respect to the corks.

The temperature was constantly around 4°C and at that depth with the silt, the wines sat in darkness. Consequently, they had no ill effect from light. Perfect. There is also a theory that as the wine was labelled “Gout American,” as in “for the taste of Americans,” it had a slightly higher level of dosage to make it sweeter and this helped the wine age.

It is also worth noting that even without any increase in the sweetness, this was an era in which champagne was much sweeter than the bottles we enjoy today. Estimates suggest that there would have been between 100 and 165 grams/liter of sugar when it was made, putting it in Château d’Yquem territory. Tests revealed that even after all the time at the bottom of the ocean, there were still 44 grams/liter left.

When it was first auctioned, it’s no surprise that the wine world was all agog. This was thrilling stuff, and all eyes were on the auction and just where one might get a taste.

Some readers may recall the mention in Krug Champagne: A Story Of Krugists Earning Five Cases Per Year Every Year For The Rest Of One’s Life And Wine Tasting Like “. . . Angels Have Descended From Heaven” of one Bernadette O’Shea, champagne expert extraordinaire, based in Brisbane. O’Shea convinced her employers at the time (and still today) that they needed to be in on this.

If memory serves, they picked up a couple of bottles at the auction for the bargain price of around $5,000 a pair. A dinner was held, extremely well attended, where there would be a number of fine champagnes, but the inevitable pièce de résistance would be the pair of 1907s.

I can remember the moment as though it was yesterday: the two bottles could not have been more different. The first opened was complex, mature, and had a character very reminiscent of French onion soup. A hint of oyster shell – some have suggested that there might have been a tiny seepage of seawater into the wine, but others claim that in fact, at that depth, there is negligible salt in the water, which also ensured that the wire cages had not rusted through (wax coverings assisted).

A roasted nut, toasty character was also apparent. It was, as one might have hoped, a wonderfully old, complex, mature champagne. Thrilling stuff, indeed.

The second bottle could not have been more different. Despite more than 80 years in the Baltic, when opened, it foamed up and out as though it was a day-old non-vintage. Utterly unexpected. Still fresh and lively. It remains in my mind as one of the most extraordinary things I have ever witnessed. For what it is worth, if I’d have been shown the wines blind, I’d have guessed it was from the 1959 vintage.

I have only seen this famous wine once more since that time – yes, definitely more than my fair share – when a friend from Finland was out visiting a few years ago. A group of us gathered in Adelaide for a farewell dinner at a local bring-your-own restaurant. As our guest, we told him not to bring any wine but he mentioned he did have something he’d like to bring along to share: sure enough, the Heidsieck Monopole Gout American 1907. Still in great form.

Indeed, if I look that good when I’ve passed the century mark, I’ll be very happy.