For this edition of Behind the Lens, I’ve taken a journey back into my archives to bring you a series of photographs of one of the great watches of our time, the Philippe Dufour Duality.

The Duality, with its linked twin escapements, was originally planned for production in a series of 25 watches. In a turn of events that seems almost unbelievable today, a lack of initial demand eventually led Dufour to limit production to just nine pieces, one of which is owned by a good friend of mine.

Over the past three years, I have had three opportunities to photograph this Duality. In this article, I’ll share some photos along with my impressions on this watch and the process of capturing it in images. Taking a look: front and back of the Philippe Dufour Duality

The first time I saw this particular watch was at a dinner with a group of five fellows who have all since become close friends. The theme for the evening was independent watchmaking, and among the array of pieces brought along for the occasion were several Dufour watches.

I had never seen a Dufour at the time, and as I began to soak in the experience it slowly began to dawn on me that one of the watches was not like the others. What was that seconds subdial doing in the “wrong” place? If anything, the dial side of this watch was even simpler than that of the Simplicity models on display: no central guilloche, no blued hands, and no raised plaque for the maker’s name.

But there were familiar cues: the Jaeger-LeCoultre-style numerals, markers, and hands were quite similar to those on the silver-dialed examples of the Simplicity as was the use of what’s known as a railroad track to indicate the individual minutes. On the Duality, the track is placed toward the center of the dial, as it is on the 34 mm Simplicity. The subtle brushing of the main dial and grooved subdial provide some visual interest, but other than the clearly apparent quality of the work, the combination of white gold case, silvered dial, and rhodium-plated hands and markers was fairly understated.

All of that changed when I flipped the watch over. Movement of the Philippe Dufour Duality

What greeted me was the first-ever implementation of a linked, dual-escapement movement in a wristwatch with the two balance wheels ticking away and their rate variations being averaged by the central differential. All clothed in a gleaming (more on this later), perfectly finished set of plates, bridges, and components that knocked me for a loop.

Here’s a closer look at the dual-escapement mechanism and its surroundings, including the characteristic (and devilishly difficult to finish) Dufour “horns” on the barrel bridge. At the bottom of the movement between the two escape wheel bridges with their black-polished end caps, you can also see the end of the pinion of the wheel that drives that second hand on the dial side of the watch. Of course, shooting a watch of this rarity and quality is an honor and a privilege, but it does present its challenges.

The brushing on the dial is quite subtle, and it’s very easy to blow it out with improper lighting. With more subdued light, however, especially from straight on, contrast is lost and a “blah” sort of monochromatic wash is all that you get. At the same time, lighting heavily from the side can give an ultra-high contrast look that, while striking, doesn’t actually look like the physical watch as seen by the eye.

I suppose that opinions vary on whether watch photography should strive to be ultra-realistic or not, but in my recent work I’ve been working to get to a realistic look before I start playing with effects. The movement presents its own set of unique challenges to the photographer. In particular, the technique that Philippe uses to apply the Geneva stripes to the plates and bridges results in a series of extremely fine scratches that have the look of lovingly-applied cake icing frozen in metal, but also results in a look that is considerably shinier than the deeper striping used by others.

Happily, this view also allows us to enjoy the wonderful radial beveling of the plate and bridge edges, and also gives us a peek (at top left, just under the edge of the plate) at the beautifully-polished click spring that helps to make a Dufour watch an auditory and sensory joy to wind.

Pointing and shooting with the Duality While most of the photos I use here on Quill & Pad are shot using a light tent and DSLR, that’s clearly not the only way to take watch pictures. Sometimes, when faced with a challenge like the dial side of the Duality, it really helps to be able to jockey around the position of the camera and light easily while getting close to the subject.

For the photo above and the one that follows, I plopped the Duality down on a cloth on my desk and shot hand-held with my point-and-shoot at the time, the Leica D-Lux 5. There are a few tradeoffs involved, including both ultimate resolution and a bit of a fish-eye effect resulting from the wide-angle lens, but for me the D-Lux did a great job of capturing the different textures of the dial. And if you’re reading this on your phone or small tablet, my guess is that the difference in resolution is probably not even visible to you. As I’ve written previously (please see Why Philippe Dufour Matters. And It’s Not A Secret), one of the most important things about Philippe is that he both draws on the work of prior generations and leaves a legacy for those who will follow.

Just as the Duality draws inspiration from the design of a student pocket watch, its linked-escapement design has inspired recent watches such as MB&F Legacy Machine 2. During a 2013 visit by MB&F’s founder Max Büsser, I had the wonderful opportunity to photograph these watches together.

In the photo below, you can see how in flat light, the striping on the Duality movement is so subtle as to be almost invisible; to me, the multiple appearances presented by the Duality in different conditions is one of the most fascinating things about it. 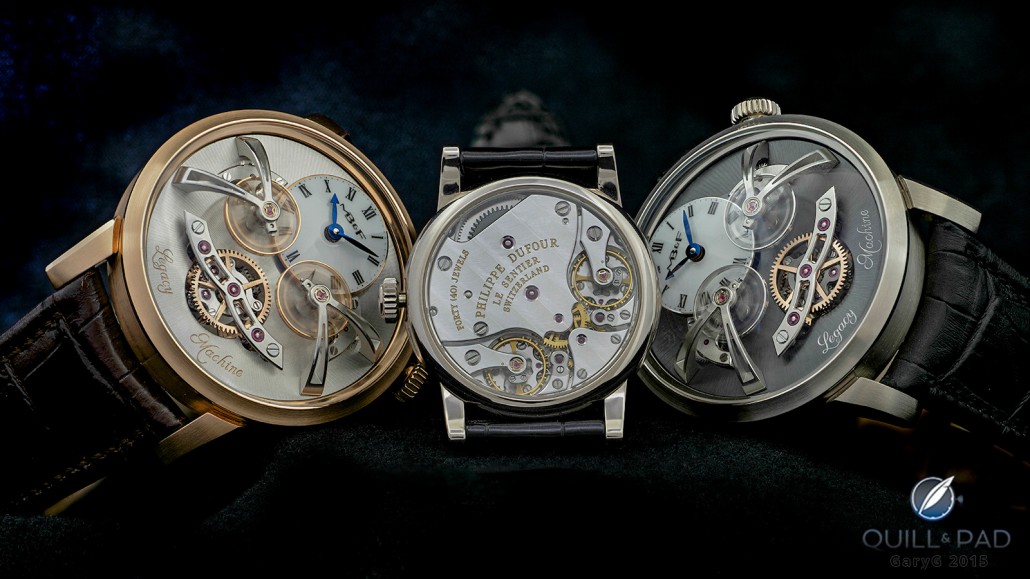 The Duality on the wrist

I’ve been thinking a lot about the art of the wristshot recently (please see Wristshots: The Story So Far) and so it seems only natural to include one here of the Duality. As a note to others who have generous friends: I was encouraged by the kind owner of this watch to wear it, but had that permission been absent, I would not have done so.

The 34 mm size of the watch seems a bit small when you first strap it on, but the inherent balance of the presentation very quickly overcomes that, and after that the size seems the most natural thing in the world.

There’s nothing quite like indirect natural light to show a watch to advantage, in my opinion – maybe I should sell the light tent and SLR and just shoot outdoors with my phone! Well, okay, perhaps not. But I do encourage those of you who make watch photographs of your own to keep experimenting with different techniques, locations, light, angles, and tools; there’s a lot to learn, and a great deal of fun to have along the way. * This article was first published on March 13, 2015 at Behind The Lens: Philippe Dufour Duality.

Why Philippe Dufour Matters: Luckily It’s Not A Secret

Behind The Lens: GaryG’s Favorite Photographs From 2018