“Comparison is the thief of joy” – Theodore Roosevelt

If there were a watch enthusiasts’ encyclopedia in which the term “embarrassment of riches” appeared, the accompanying image might just be a side-by-side shot of two of contemporary watchmaking’s great complicated pieces: the “mighty” A. Lange & Söhne Double Split and Patek Philippe’s Reference 5370P split-second chronograph. 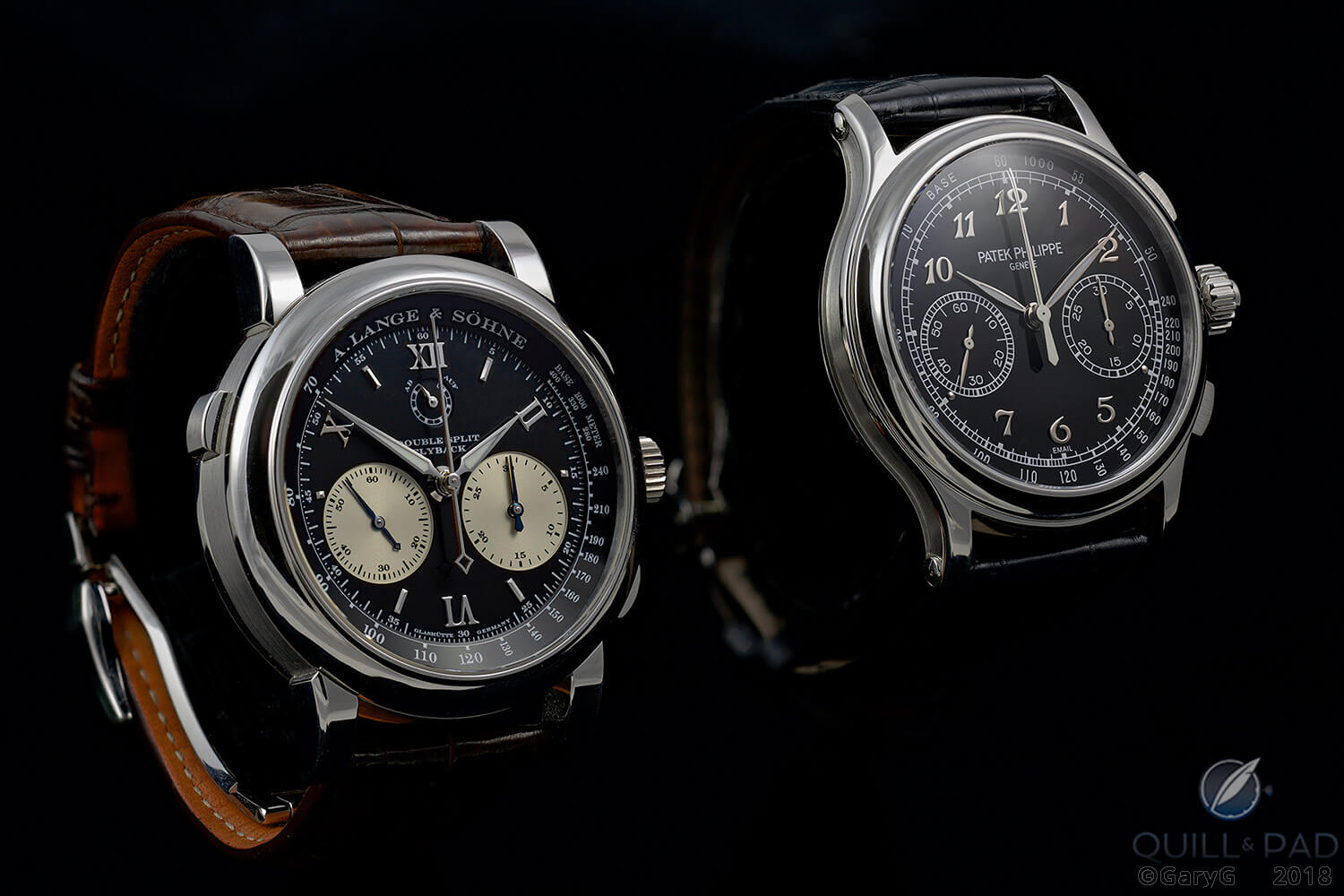 Side by side: A. Lange & Söhne Double Split and Patek Philippe Reference 5370P

As a collector, I have the incredible good fortune to own both of these watches, and not surprisingly I’m often asked to compare and contrast the two, opining on which one is the “better” watch.

I’ll attempt to answer that question at the end of this article and before that will argue why each one should win the competition, but let’s start with strengths that these two landmark pieces share.

Why both the A. Lange & Söhne Double Split and Patek Philippe Ref. 5370P are great

I’ve written here before about why I bought the Lange Double Split and the Patek Philippe Reference 5370, and I won’t repeat all of the virtues of each watch here, but there are a few shared elements of their appeal.

At the top of the list is coherence: in both instances, each element of the watch meshes with the others to create an overall impression of harmony. As a test, imagine swapping the Double Split’s dauphine hands with the leaf hands of the Reference 5370, or swapping the deep relief engraving on the Double Split’s case back with the unadorned rear bezel of the Patek Philippe piece.

In my view, each watch would be diminished as a result; and the same holds true for all of the elements of the design of each watch, from case shape to movement materials and finishing. 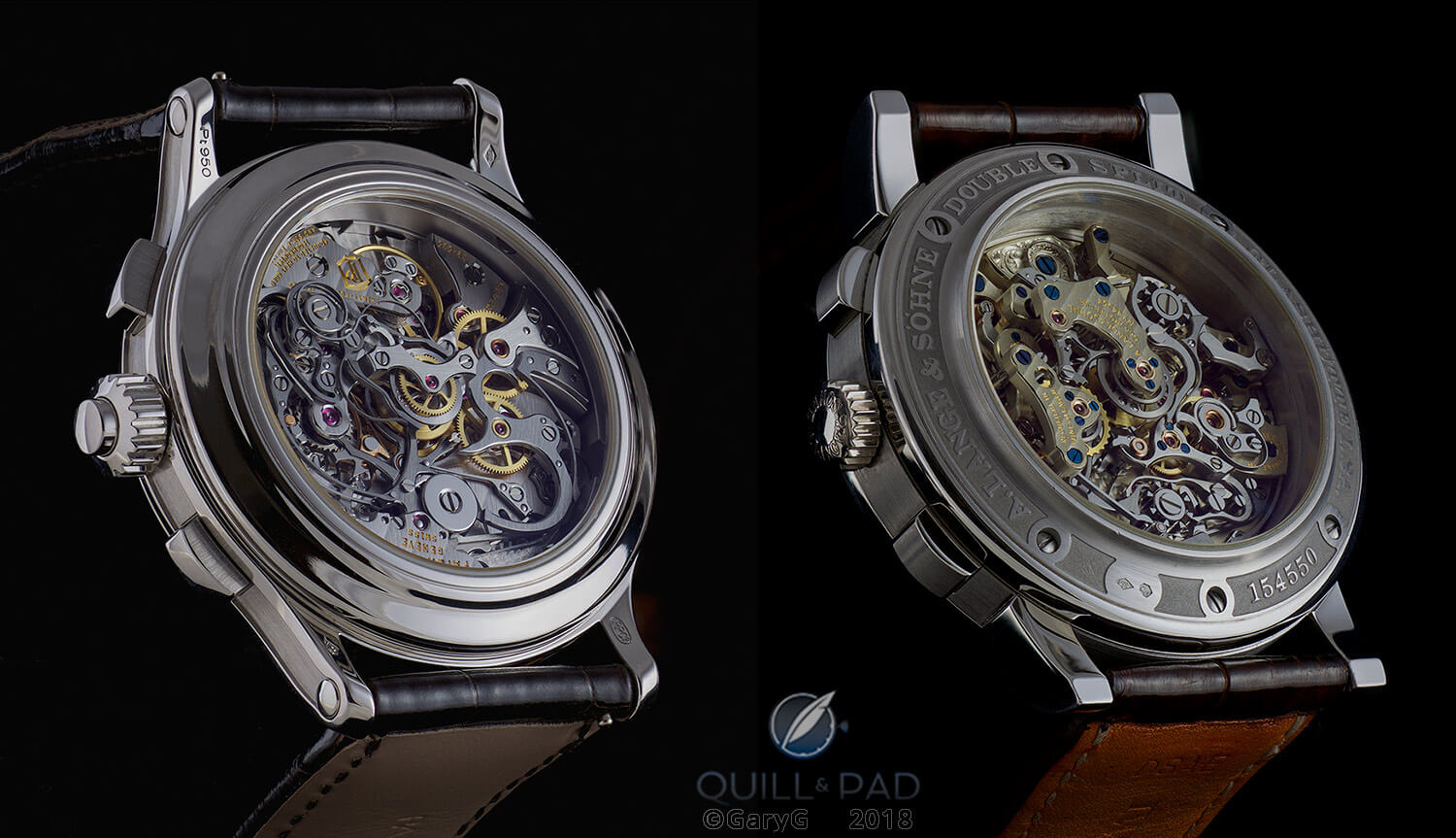 For me, each of these watches is completely representative of the brand personality of its distinguished maker: the A. Lange & Söhne with its busy, almost cluttered dial, straight-sided case, and mechanical wizardry in the form of a deeply three-dimensional movement, and the Patek Philippe with its elegant profile, fine case and dial craftsmanship, and subtle but useful mechanical refinements incorporated into a classically styled movement.

Each is also a mechanical marvel, allowing the user to capture the passage of time related to discrete intervals such as laps within the context of longer events, packaged beautifully and wearable on the wrist, and operating with a tactile pleasure that far outstrips watches using simpler rattrapante mechanisms such as that found in the IWC Doppelchronograph and those in many other split-seconds timepieces.

Both movements hack when the crown is pulled out, and each has instantaneously jumping chronograph minutes rather than the less satisfying semi-instantaneous or continuous functions of many other chronographs on the market. 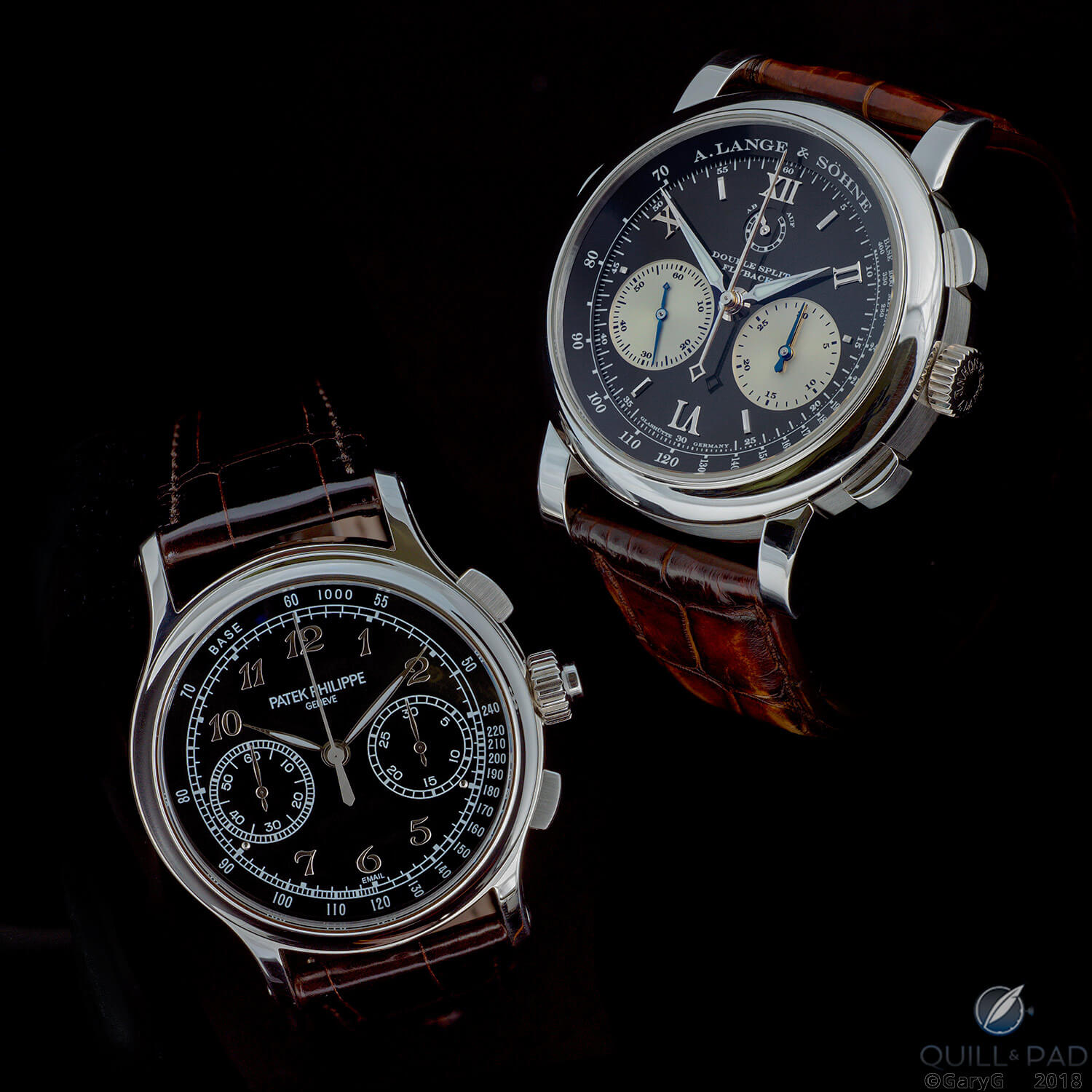 And they both have great wrist presence!

There’s a wow factor associated with both of these watches due to both their size and dramatic black and platinum contrasts that is a treat to experience privately and fun to observe on watch pals’ faces when it’s time to pull up one’s sleeve.

Why the A. Lange & Söhne Double Split is clearly better

All of that said, the A. Lange & Söhne Double Split is clearly the better watch, right? 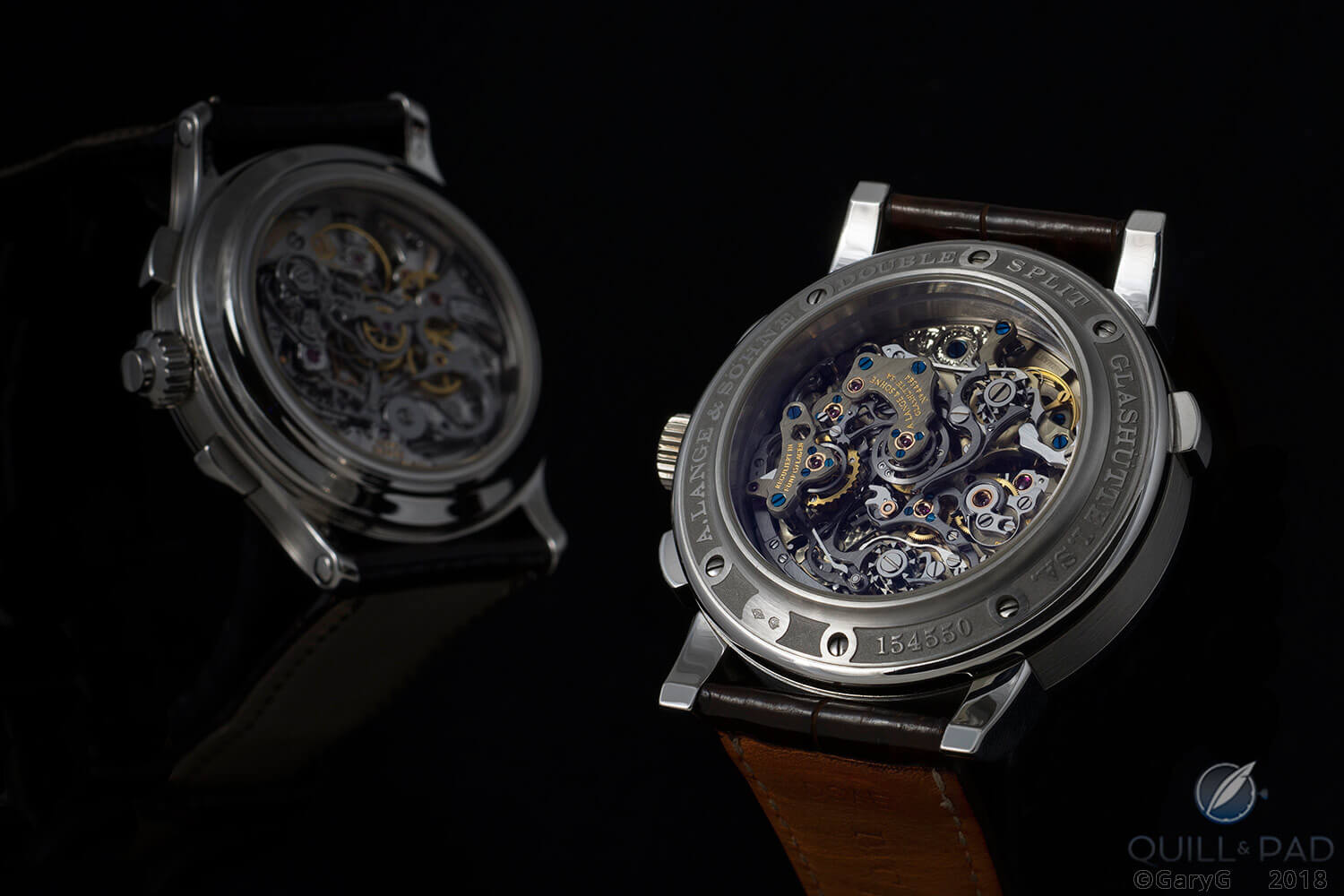 Out in front: the Double Split from A. Lange & Söhne

That movement that you see in the photo above isn’t just a feast for the eyes; it has mechanical functionality that leaves that of the 5370 in the dust.

First of all, all of the chronograph indications can operate as flyback functions, zipping back to zero when the return pusher is pressed during active time recording, while the 5370P has only a simpler stop-start-reset capability.

Then there’s the matter of the complication that gives the A. Lange & Söhne watch its name: a rattrapante “split” function that applies not only to the chronograph’s second hands, but to the 30-minute chronograph minute scale as well.

While I’m not sure that I’d ever use the rattrapante hours indication of A. Lange & Söhne’s new Triple Split, I have found the ability to time “splits” of several minutes quite useful on occasions such as understanding the lengths of various legs of urban commutes by foot and subway, for instance. 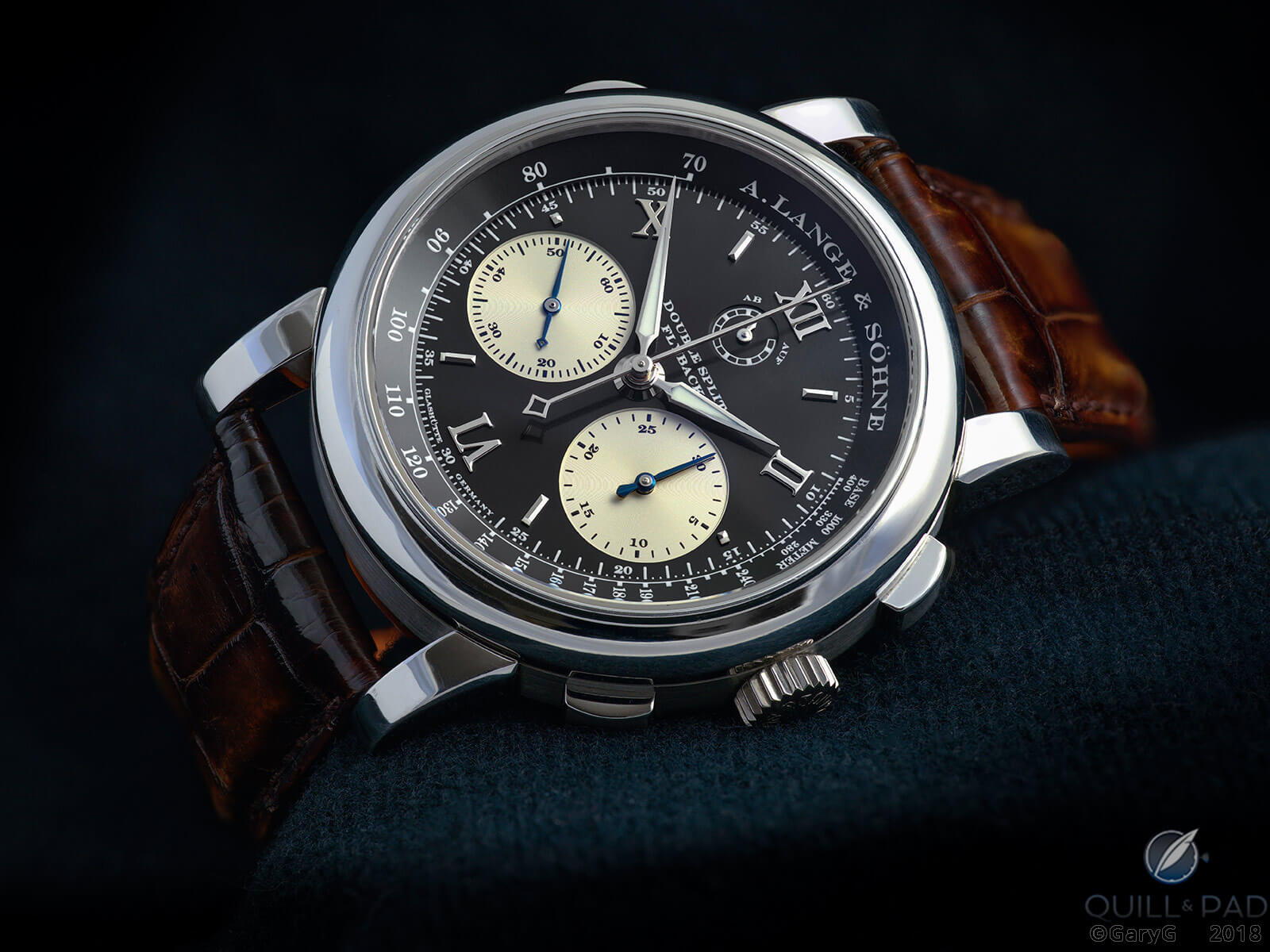 Both useful and mighty: A. Lange & Söhne’s Double Split in platinum

And to use the moniker that I first bestowed upon it years ago, the Double Split is mighty!

It has an assertively masculine look that made my standard Datograph look weak by comparison, and it has a weight on the wrist that some people dislike but that I find a tremendously enjoyable reminder of its presence.

From my own experience as well as the forum reports of some owners who have conducted various “hold down button A while simultaneously pressing buttons B and C” torture tests (please don’t try this at home!), I also have no doubt that its mechanical robustness matches its weighty look and feel. You can push its buttons: A. Lange & Söhne Double Split

This doesn’t come at the expense of tactile subtlety, however: the pusher feel of A. Lange & Söhne chronographs is renowned for being both silky smooth and balanced between start/stop and return pushers.

The Double Split is no exception, and if anything its feel is superior to the somewhat unbalanced resistance of the 5370’s start/stop (and rattrapante) operation as compared with that watch’s featherlight return to zero. Finally, I’ve long argued that A. Lange & Söhne’s movement finishing is more assertive than it is elegant, but if you check out the steel chronograph clutch lever in the lower part of the image above, you’ll see that there is at least one hand-finished sharp interior angle in the Double Split movement, a touch that the 5370 lacks.

Why the Patek Philippe Reference 5370P is obviously better 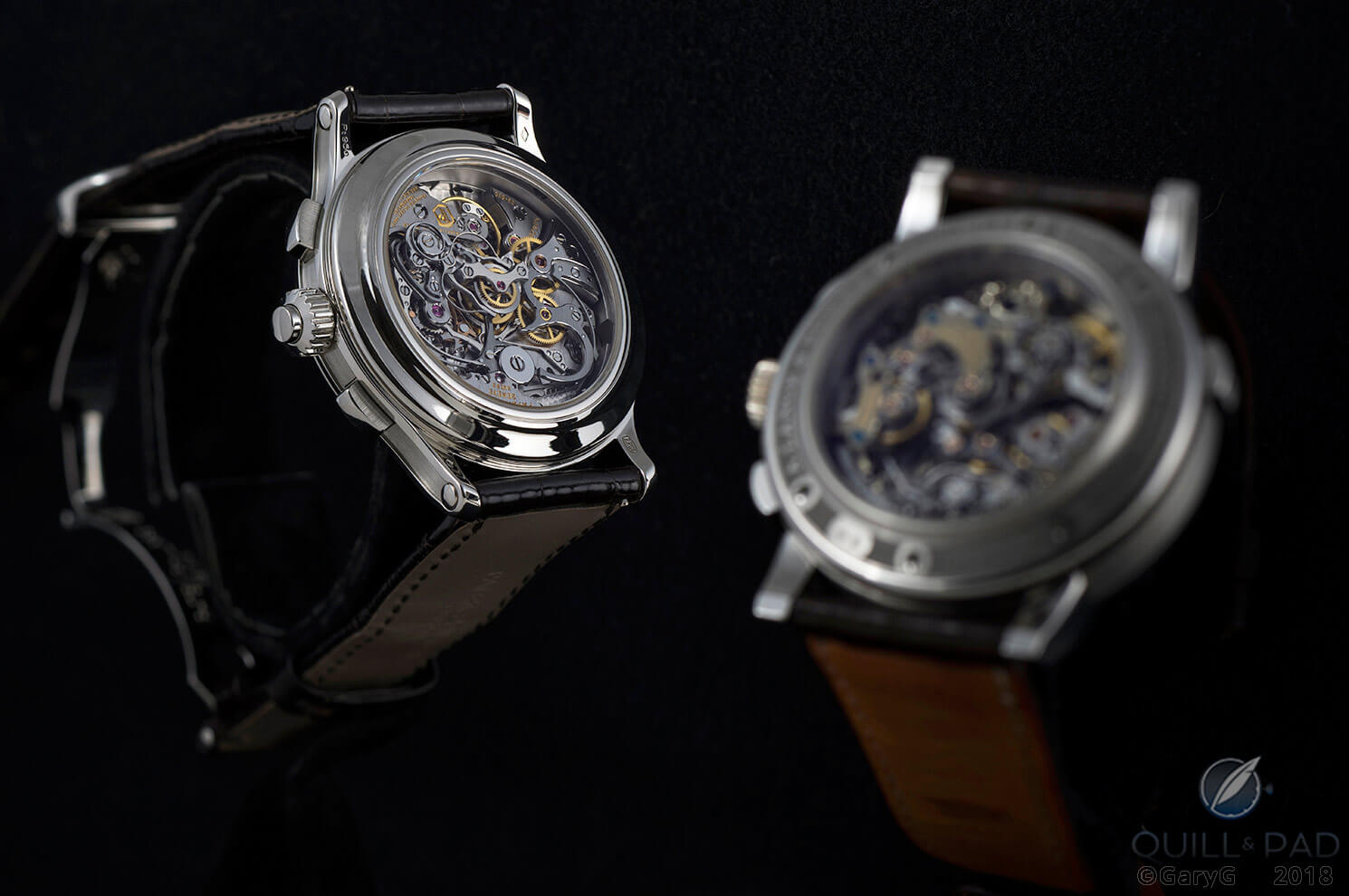 Sure, the A. Lange & Söhne Double Split is a mechanical marvel, but collectors don’t live by function alone. The moment I saw photos of this watch I started to scheme about how I might possibly get one as it is just so, so lovely. The dial side is the first highlight: the jet-black enamel dial is, as far as I can tell, absolutely flawless, and in a straight fight far outdistances the dial of the Double Split in elegance and difficulty of manufacture.

The shaped Breguet numerals are the cherries on top of this confection, and while I find myself looking at the Double Split to check the time, my eye lingers much longer on the dial side of the 5370 and I find that a second look is often needed to check what the time was in the first place! 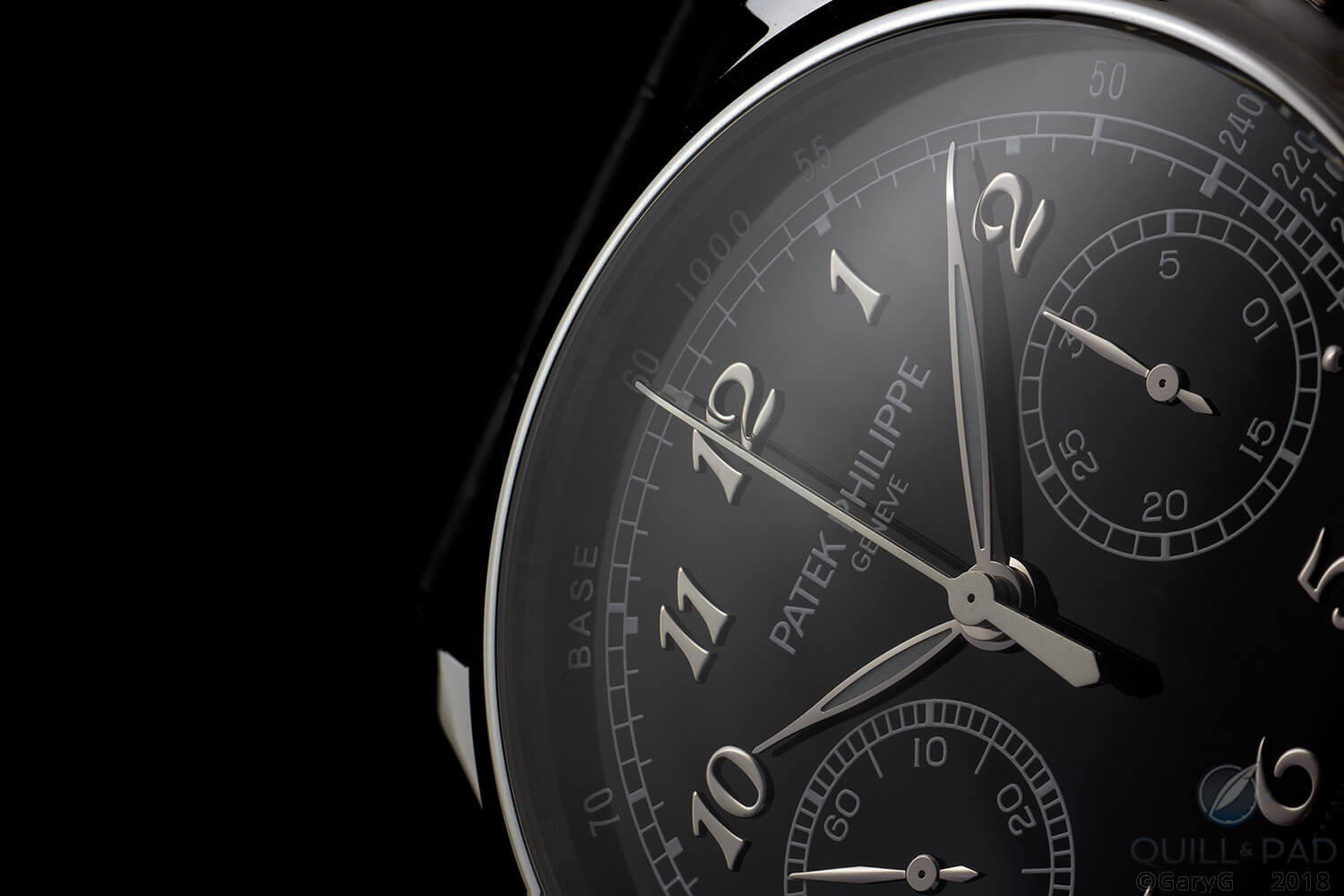 The 5370 wins for me in the case category as well with an assortment of curves, recesses, and shapes that set it apart from the Double Split’s well made but much more straightforward design. 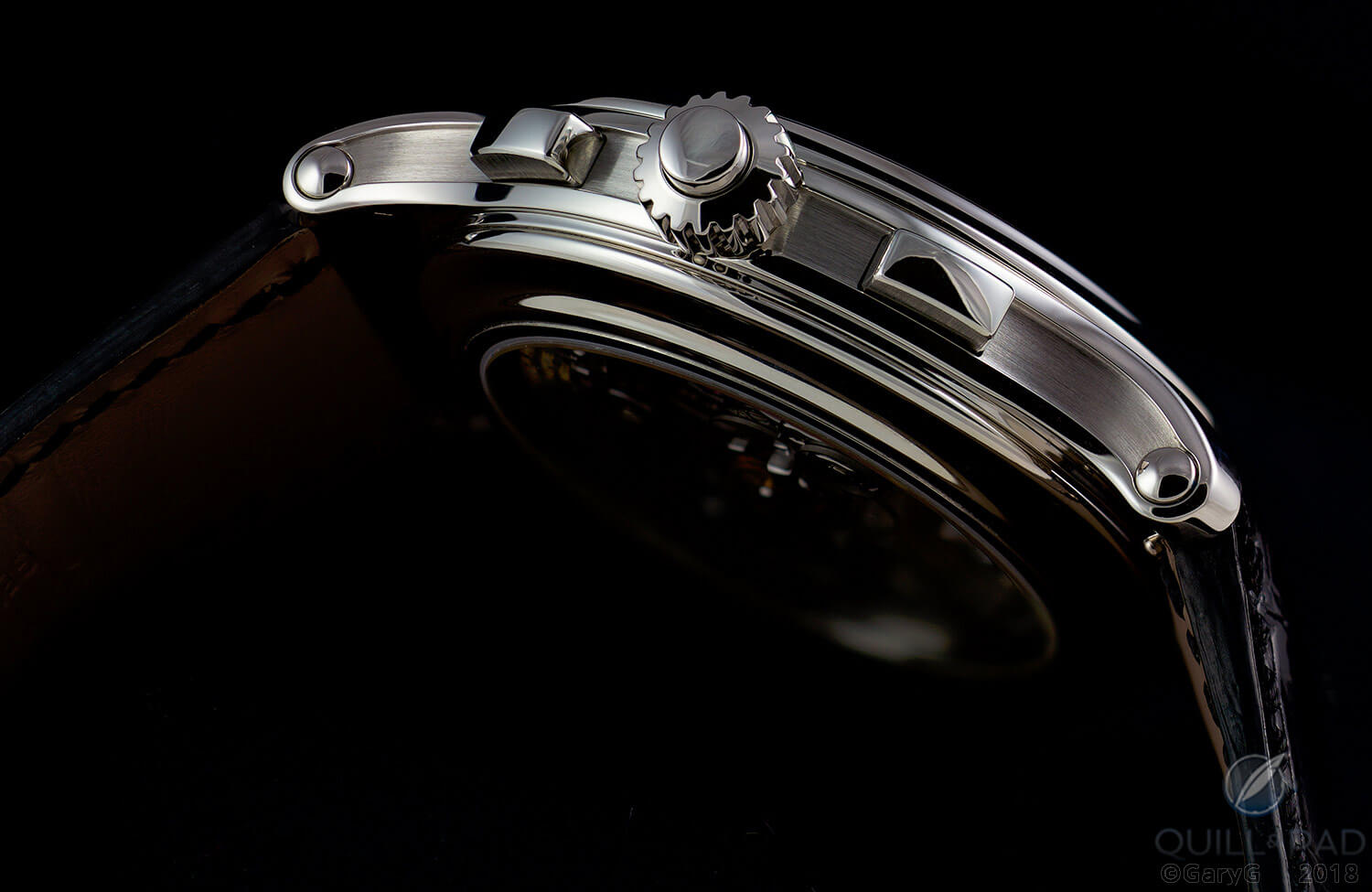 And while the Double Split simply cannot be overcome from a mechanical perspective, the 5370 is itself no slouch in that department.

For me, the Patek Philippe has the advantage of classicism: from its flatter movement profile to the polished caps on its column wheels to its crown-mounted rattrapante pusher (as compared to the Lange’s button at 10 o’clock). And in true Patek style the 5370’s Caliber CHR 29-535 PS contains some subtle improvements on past practice including a roller-equipped split seconds lever that keeps the two chronograph second hands absolutely, perfectly aligned one atop the other when reset to zero. 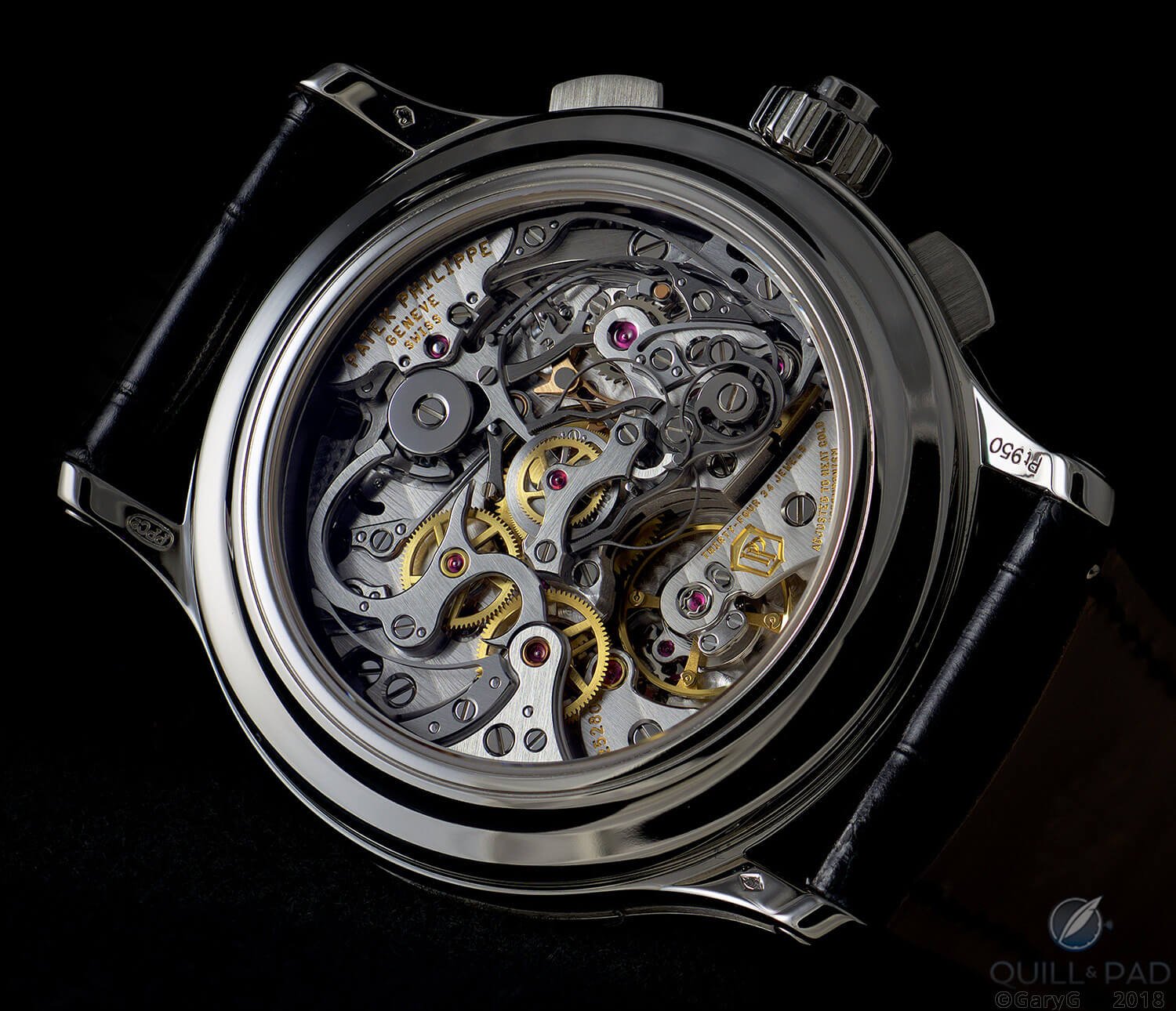 For me there’s also something appealing about the simplicity of Reference 5370 relative not only to the Double Split but to other watches in the Patek line, including the Reference 5204 split-seconds perpetual calendar, a watch that is considerably more complicated but less attractive to me overall.

Crunch time: which watch from a collector’s perspective?

When push comes to shove, as a collector you can’t buy, or keep, them all! So, for this collector which piece rises to the top of the list? 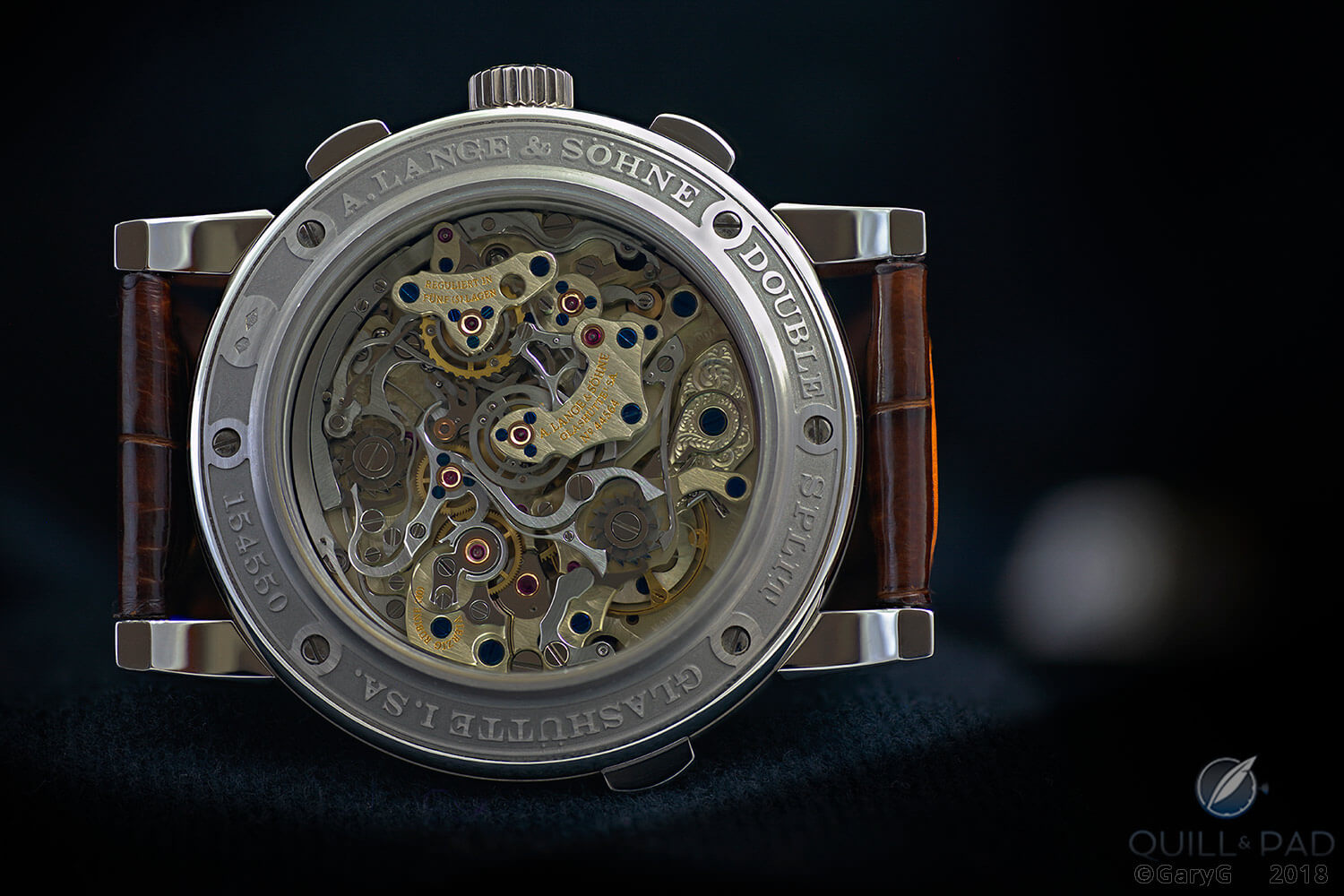 Is this the one? Movement view, A. Lange & Söhne Double Split

Happily, I’m not a speculator in watch values so I don’t need to think about future price movements with the exception of my usual concern about “getting hurt” should the value of either of these pricy pieces plummet.

On that criterion, there’s no clear advantage for either watch: the Double Split has traded in a predictable range on the pre-owned market for quite a while and seems to be on an uptrend these days. The 5370P has the Patek Philippe name going for it as well as low production volume and broad acclaim as one of the most important Patek Philippe watches of recent times. 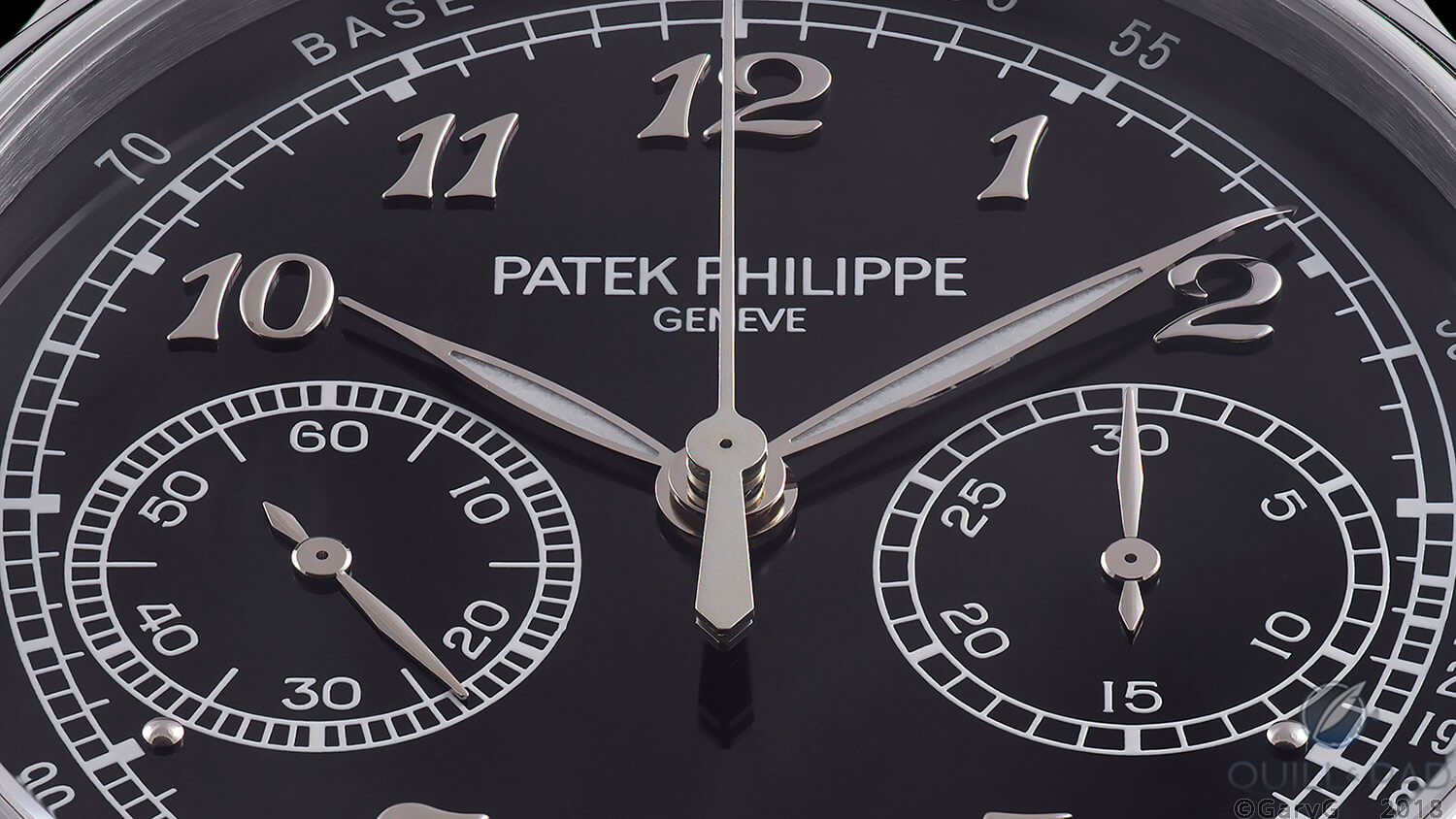 When my pals and I talk about choosing between and among watches in our collections, we apply a number of hypothetical tests, including the “desert island” test and the “need to sell” test.

For me, if I apply the constraints of the former test – I can only keep one watch and will be taking it with me to a desert island – the Double Split wins the day for its functionality, versatility, robustness, and sheer fun of use.

On the latter test, however – I need to raise funds for a house, car, medical expenses, or even (gasp) other incoming watches and have to choose between one of these to sell – it’s the Patek Philippe that stays and the Double Split that goes to another happy home as there’s nothing else in my collection that captures my imagination with its beauty and refinement quite the way that the 5370P does.

What choice would you make? I conducted a quick poll on my Instagram page and the result was 14 to 12 in favor of A. Lange & Söhne with two tie votes – clearly opinions vary on this one, and I’ll look forward to hearing your views in the comments section! 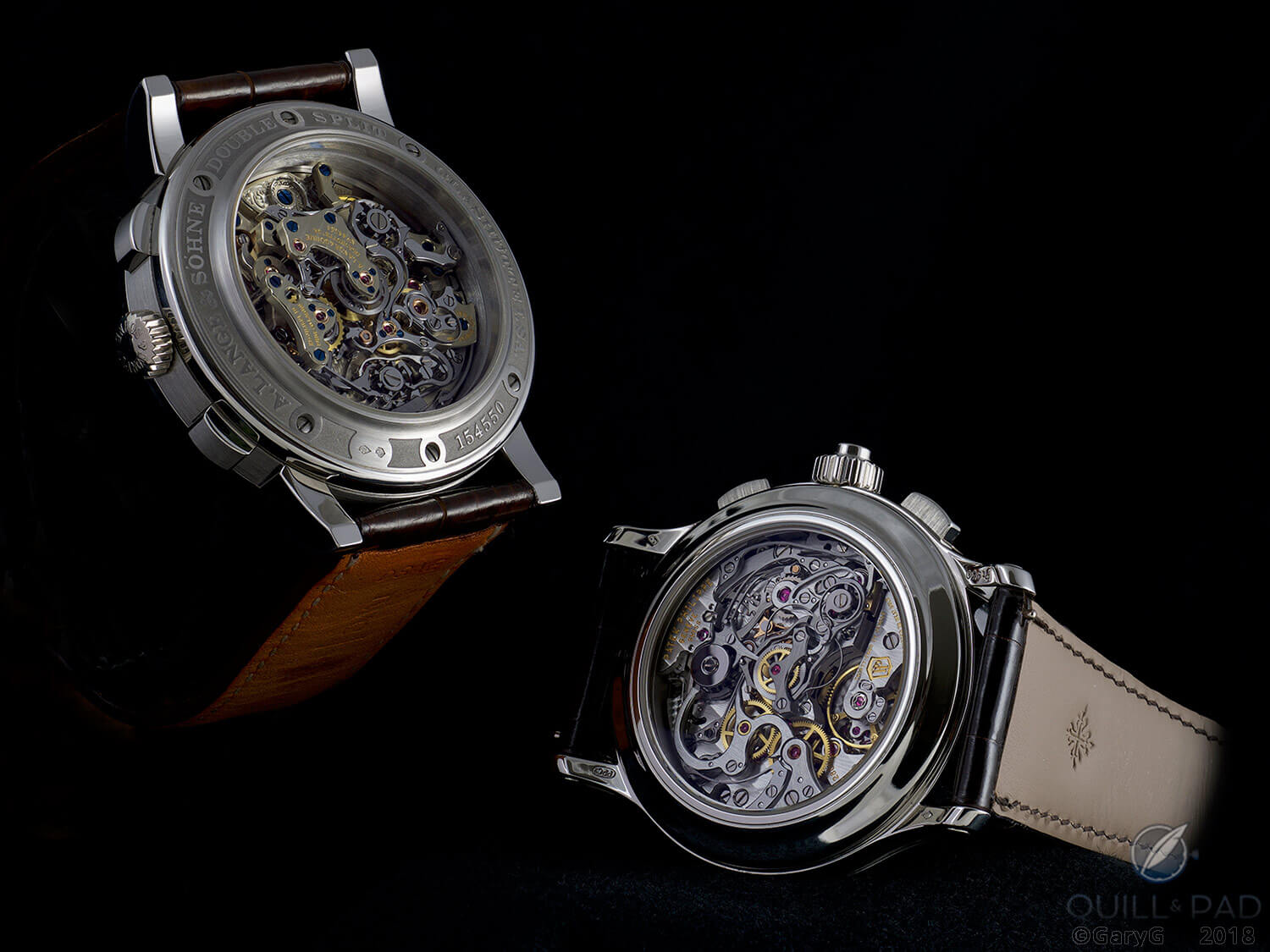 * This article was first published on June 16, 2018 at Split Decision: Patek Philippe Reference 5370P vs. A. Lange & Söhne Double Split, An Owner’s Perspective.

Why I Bought It: Patek Philippe Reference 5370P