If you have read my article Zen And The Art Of Wristwatch Maintenance: The Benefits Of Learning To Service Your Own Watch, you will know that I am not averse to opening up my watches and tinkering with the innards, in some cases going as far as to perform a full service. In the case of dive watches, this entails replacing and/or lubricating the various seals to ensure that the watch is as water resistant as its rating indicates.

A time-only wristwatch usually has three points of ingress for water, especially under pressure: the case back, of course, but also the seal between the crystal and the case, and the crown.

In a dive watch, in addition to the rubber gasket on the winding stem that blocks the crown tube in the normal position, the crown is usually of the screw-in variety, providing additional protection. The crystal has a gasket between it and the case, wedged in place by friction, and the case back usually has a gasket beneath its lip that closes against the case when tightened.

The case itself needs to be strong enough to withstand distortion from higher water pressures, which is why dive watches tend to be rather chunky compared to their non-sporting counterparts. Provided this is so, the crystal, case, and back will be sealed ever tighter as water pressure increases.

Regular silicon lubrication of all the gaskets prevents them from drying out and developing weak points. This is also why you should never “kill” the rubber seal on a case back by over-tightening it: it needs to retain some of its cross-sectional “o” shape so that it still seals the gap on returning to normal air pressure on dry land. I had recently checked the seals on my Seiko SKX013 Pepsi and lubricated them using silicon grease, successfully trialing its basic water resistance while swimming and snorkeling in the sea off France’s Atlantic coast on several occasions over the summer.

Professional watchmakers have air- or water-based testing machinery to test the water resistance of their watches, but I do not. So I was on the lookout for an opportunity to take it down to the next level, so to speak.

What I did on my holidays

As a perfect example of the absurdity of current European COVID-19-related travel restrictions, even though France’s government is, like its UK and Spanish counterparts, running around in ever-decreasing circles like the proverbial headless chicken, as UK nationals resident in France there was no restriction of any kind on our travel to Catalonia for the holiday we had booked several months ago. So we packed up the car and headed off on the six-hour drive to the Costa Brava in the time-honored manner.

Our daughter was not so fortunate and could not join us as planned as she lives in London and would have faced a 14-day quarantine (“quatorzaine”?) period on her return, which according to those who have undergone it recently is a pointlessly cruel and demoralizing experience, especially for young people. So we were able to spend several days on a cliff-top hotel overlooking the delightful beach cove at Aiguablava, whose size and shape has naturally limited tourist development to a handful of restaurants, a boat hire shed, and a diving shop and school, Begur Dive. It was the latter that caught my eye, especially as it offered a two-hour “Introduction to Diving” course. Here was an opportunity to submit my SKX to some serious water pressure. My previous experience of scuba diving had hitherto been limited to a grounding in the basics, gleaned on a PADI course in a north London swimming pool about 30 years ago. I had eventually dropped out of the course after hearing more experienced members of the club repeatedly lamenting the fact that the “vis” (visibility) on the wrecks they were exploring on their weekend trips to the English coast had been one meter or less!

I was therefore keen to resume my training in the limpid waters of Aiguablava, especially as, according to an information panel situated just off the beach, four wrecks dating back to the first century BCE had been excavated in the rocky bay and found to contain amphorae containing wine and olive oil from North Africa, presumably on their way to Rome.

After a brief chat with one of the diving instructors, I signed up for the next day’s “Introduction to Diving” course. The following afternoon I turned up at the beachfront school and was kitted out, alongside two other trainees, with full wetsuit, mask, buoyancy harness, and compressed air tank.

For anyone who enjoys the freedom of swimming and free diving in the sea, the constricting nature and sheer weight of full scuba equipment takes some getting used to. I consoled myself that it would all feel a lot more comfortable once underwater.

Lastly, I rolled my left cuff up a little so that my Seiko SKX would be clearly visible. After a perhaps rather peremptory explanation of the basic breathing and mask management techniques (I was glad to have had some previous practical experience of this, even if it was many years ago), we padded down to the beach and into the sea, donning flippers and swimming out to a depth of about two meters.

Once submerged, my instructor Alan began adjusting my buoyancy jacket so that, with the help of the 10 kilograms’ worth of weights strapped around my waist, I began to sink until I found my buoyancy level.

Once stabilized, I was given the okay sign (using index finger and thumb, NOT thumbs up, which means “going up”) I was told to adopt and maintain a kneeling position on the seafloor while the other trainee divers caught up. A school of curious John Dory swam up to investigate this strange, bubble-emitting phenomenon.

At this point I was quite comfortable with the experience of breathing compressed air underwater, although breathing exclusively through my mouth did take some getting used to and I felt that I was over-breathing.

Once we were all in position, we headed off out to sea in a group. Alan tapped me on the shoulder and told me to look behind us: the school of John Dory, now 20 strong, was following us in hot pursuit on the seafloor.

As we swam further out, the seabed gradually fell away and we dived deeper, pausing only to equalize the air pressure in our ears, just as one does in a descending airplane. Soon we passed over a heap of amphorae scattered on the seabed, which I figured were probably replicas as the original wrecks had long been excavated and moved to a museum.

By now the light from above was growing dimmer, even though it was a very sunny day, and the nose-pinching ear pressure adjustments became more frequent. Just as they tell people with a fear of heights not to look down, when diving you need to be prepared for the first time you look up and can’t see the surface.

I now realized that at about a depth of 9-10 meters, I was deeper underwater than I had ever been. It’s a long way to the top (photo courtesy www.oceandivers.com)

This was where things began to get interesting: although my eardrums were successfully equalizing the increased water pressure my sinuses weren’t, and a sharp pain began to develop across my forehead. Much as I wanted to continue the dive, I could feel my stress levels rising as the pain increased.

Even experienced divers are not immune to “altered perception” underwater, a mental state that can be triggered by something as simple as an equipment problem, aggressive wildlife, or simply an unplanned turn of events. In this state the diver’s perception narrows, often focusing obsessively on one thing and losing the ability to think rationally about how to deal with the situation.

If left unchecked, this can lead to growing anxiety and eventually a full-blown panic attack, which can result in potentially fatal attempts to rip off mask, oxygen tank, and regulator and make a bolt for the surface, which is utter lunacy if you are more than three or four meters below the surface.

A panicking, flailing diver also poses significant danger to his dive instructor or dive buddy, which is why diving instructors undergo specific training in dealing with a panicking diver.

It was at this point that I caught myself calculating that if I did ever want to make a break for the surface, as I did not have control over my buoyancy jacket (with a beginner, the instructor regulates this throughout the dive), I was going to have to jettison my weight belt, which was strapped on with a buckle similar to an airplane seat belt, followed by the buoyancy jacket and oxygen tank, which were attached by considerably more fiddly buckles.

Fortunately, I recognized this irrational thinking as a sure indication that I was displaying the initial signs of stress and was going to have to abort the dive. I signaled to Alan that I was “not okay” and wanted to go up. He adjusted my buoyancy jacket and we made our way quite slowly back to the surface. Once there, we tried to make my mask more comfortable by loosening the strap, but it didn’t really help so we decided to call it a day.

In spite of this experience, I am very keen to try diving again, perhaps after getting my latent sinus problem checked out by a doctor. 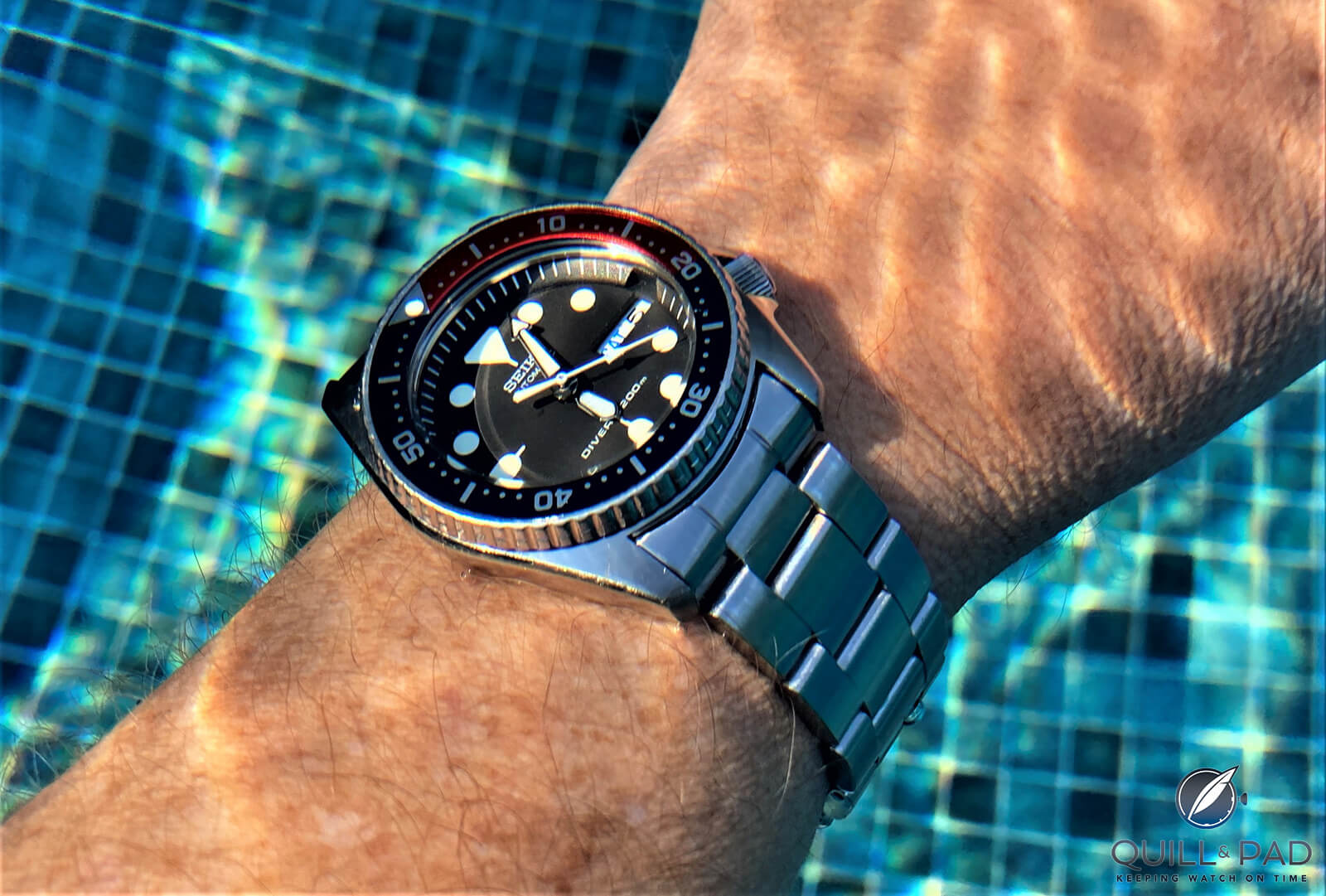 Oh, if you’re wondering about the depth-testing of the Seiko SKX, I never looked at the damn thing the whole time I was underwater as I had more pressing concerns. But I can report that it seems to have survived the experience too.

Zen And The Art Of Wristwatch Maintenance: The Benefits Of Learning To Service Your Own Watch