Bovet And Daniil Medvedev: Relationships Make One Of The Best Tennis Players In The World

However, it is Rolex who has most of the tennis world under contract – the brand’s global domination of the white sport includes not only dozens of top players, but all four of the Grand Slam and all nine of the ATP 1000 tournaments themselves. (See how the Rolex tennis journey started in Rolex and Wimbledon: A Match Made In Traditional (Tennis) Heaven.) Bovet and Daniil Medvedev: the 2019 announcement

Rolex might have most of the sponsorships, but it doesn’t have all of them. And in 2019 Bovet made a wonderful catch when the Swiss brand announced that it had signed the then world number five player Daniil Medvedev.

This announcement came the week before the 2019 U.S. Open, right after Medvedev’s summer string of wins and just before he reached the finals of the United States’ most important tournament, where he lost in a tight five-setter against Nadal, a match pundits called one of the greatest U.S. Open finals ever played. While to me Bovet and the fiery Medvedev seemed an unlikely pairing, the bold court personality of the young player as exhibited during that New York fortnight had me changing my mind. While at first his negative reactions to the New York crowds (which even I, as an American, find harsh) only produced further booing, the Russian player’s sense of self and cynicism finally won over the tennis-watching public. A press release issued by Bovet in the week before the U.S. Open 2019 final stated that Medvedev and Bovet CEO Pascal Raffy, “ . . . have much in common in their respective challenges: they both have to demonstrate continuous effort, abnegation, humility. Their meeting has even further manifested this sharing of values, always going forward by improving each day, the need to be and remain an incredible champion.” A rather mundane description for this exciting, fresh face and what could be an explosive collaboration.

Medvedev’s choice of watch was the Bovet Ottantasei Tourbillon, a sporty creation born of a partnership between Bovet and Italian automotive designer Pininfarina. Medvedev does not wear his timepiece while playing. Raffy is not only the CEO, but also the owner, of Bovet. He is a tennis fan and has in the past engaged professional tennis players David Ferrer and Pablo Carreño Busta as brand ambassadors. “Tennis is a sport that suits me particularly,” he said. “The concepts of exchange and respect are very present whether opponents or partners with whom we play. It is this very notion of respect and human values that are fundamental within our link to the world of tennis and that we use in our communication strategy.”

“Since then,” Medvedev commented over Zoom from his adopted home city Monaco during an interview session with me, “I think both Bovet and I are really happy with our partnership. I know many people from the company, and it feels like a small family.

“It’s not that many companies where the CEO comes and wants to meet you just to sign the contract. That made a big impression because at that moment I didn’t have any contracts except for clothes and my racquets, if I’m not mistaken. Mr. Raffy, you know, has very strong energy, I would say like any famous person in the world, which impresses you straight away from the beginning. I think that is very good for business and for trying to convince people to work with you, and that’s what happened with me also.”

Now in preparation for the French clay court season, notably the quickly upcoming Roland Garros (formerly the French Open), the tall, lanky baseliner walked me through his partnership with the haute horlogerie brand at home in a castle in Môtiers. One of the first things I asked the current world number two player was which watch he is currently wearing. He proudly put his wrist up to the laptop camera to show me. “Oh my gosh!” I exclaimed. “It’s a Brainstorm!”

He had the latest version of this watch officially called the Récital 26 Brainstorm Chapter Two on his wrist, recognizable by its bright blue components wrapped in clear sapphire crystal.

The Bovet Brainstorm Chapter Two continues down the path laid by Chapter One in that it has all of the same indications save one. It displays the hours, minutes, seconds, power reserve, and moon phase. But instead of the large date, Chapter Two features a world time/second time zone display. And even though it visually shares a general aesthetic with Chapter One, Chapter Two features an entirely new movement with completely new architecture. Housed in a sloped sapphire crystal writing desk-shaped case typical of Bovet’s newer Récital pieces, the domed features of the time display dominate the visuals along with the tourbillon. And another interesting feature is found in the power reserve indication, which is somewhat concealed between the lugs on the side of the case where the sloped writing-desk case is tallest – almost like a little Easter egg for the owner. The cherry on top is the intricate engraving over every side of the movement, which Bovet is so well known for. This unique style of engraving looks almost like micro crystals, similar to the inside of a geode, making it seem like the movement was hewn from crystals. The artistry of the engraving adds a dramatic amount of depth. “Yeah, so that’s my favorite one,” Medvedev said, snapping me back to reality after losing myself for a moment in the thought of that watch’s Caliber 17DM06-DT, which I had the chance to inspect personally during Geneva Watch Days in August 2020. He loves the way it looks. “It’s so architectural; every detail is special and every time I wear it it feels like the first time. I think that’s a really good feeling, and that’s really important.”

Medvedev has gone on record saying that his tennis results improved greatly after he married his girlfriend Daria in 2018. “Before I made a proposal, I had been 65th in the ranking, and then in ten months I won two major tournaments and entered the top 10. We have significantly rebuilt our life, we work for each other,” he told Russian website championat.com about a year after his wedding. 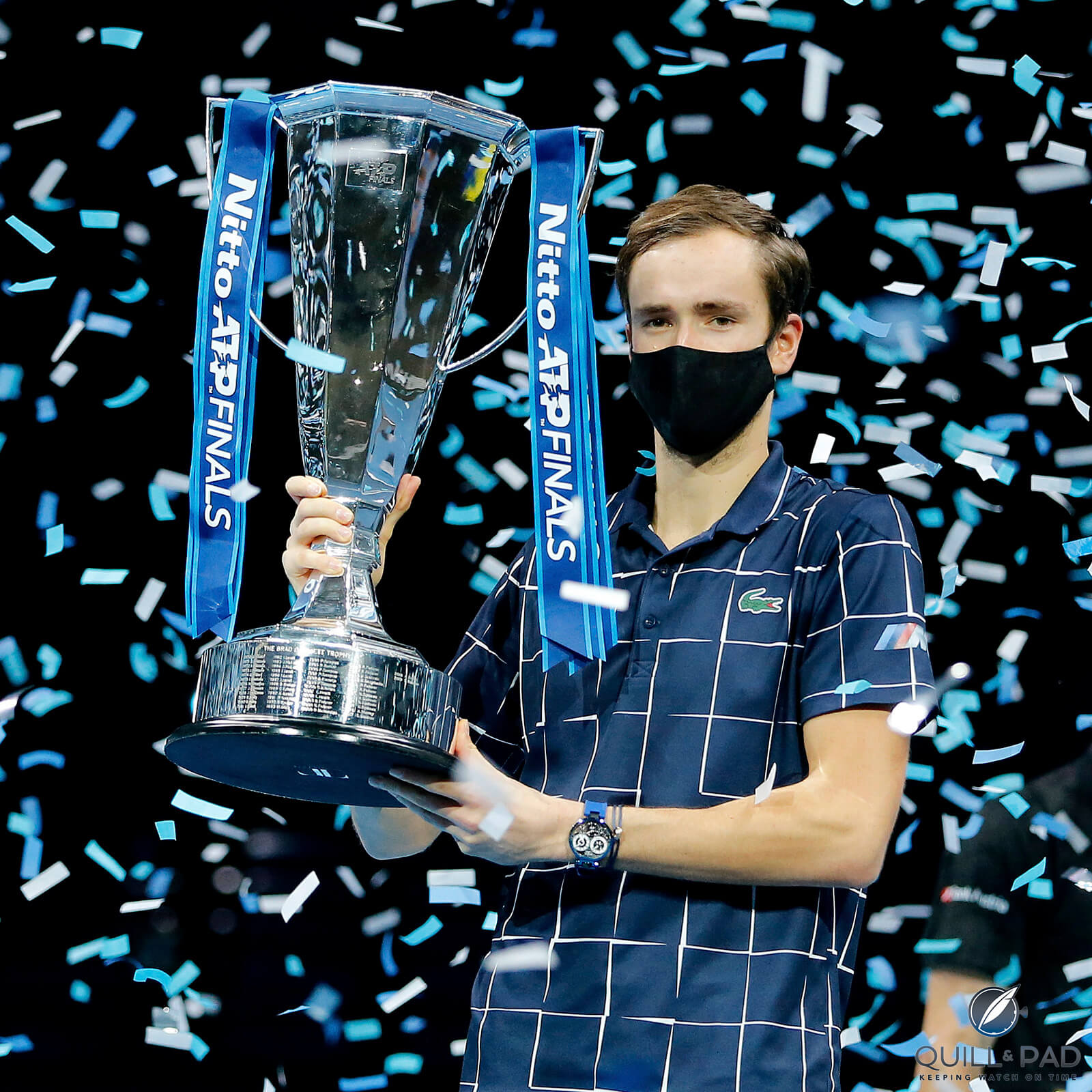 While I applaud that love has lifted him, I also really like how he feels about his business partners. “Every time you start collaborating with someone you like and something you like and people who believe in you, it gives you a good feeling. After signing with Bovet, I made the finals in the U.S. Open and of course straightaway some other companies from other fields started to be interested . . . the more you win the more it gets interesting.”

Medvedev was the fifth-highest earning male tennis athlete in 2020 with $4.5 million in endorsements. Forbes sportswriter Tim Newcomb confirms that Medvedev selects brands he personally enjoys. “That makes life easier,” Medvedev stated, “it makes life happy to represent for this brand, have a good relationship with them. They always support you and you always support them. I can say this about all the brands.”

“When I was really young, I was interested in watches but in a way that the new generation is,” Medvedev answered my query regarding his previous interest in timepieces. “You know, you see it somewhere on the internet and then you maybe follow a link, then follow another link, then you start to know some companies, that’s how it was. Of course as soon as I started playing better, there was this opportunity with Bovet, which is when I started to get into it more.”

And let’s hope he stays in it – I can’t think of many better hand models right now.

Rolex and Wimbledon: A Match Made In Traditional (Tennis) Heaven