Quest For My Ultimate Fountain Pen Part 2: The Italian Period

Italians have the gift of making even the most common object look great.

They can even make a coffee grinder with enough sex appeal to make Tom Jones jealous!

While in these modern times most fountain pen brands have fallen prey to the mighty power of keyboards, in Italy they seem to be hanging on just a bit longer. Which means that for a relatively small country, Italy still has quite a few fountain pen manufacturers. And I think that I have tried products from almost all of them! An overview of the author’s Italian fountain pens

My wanderings through the world of fountain pens had made me more knowledgeable (see My Quest For My Ultimate Fountain Pen Part 1: The All-Over-The-Place Period), and my previous pens had made me also quite a bit wiser regarding my personal preferences: the pen should not be too small, and bold colors were preferable. And so I entered the world of Italian fountain pens

When I walked into P.W. Akkerman in The Hague, a magnificent store that sells some of the most amazing fountain pen brands, the salesman figured out quite quickly that I didn’t know exactly what I was looking for.

His response was unheard of: instead of presenting me with what he thought I should have or might like, he went over to a display rack, picked up about half a dozen of pen magazines, gave them to me free of charge, and told me to come back when I had found my pen.

I was stunned by this approach . . . but did what he suggested. The magazines certainly bolstered my knowledge about fountain pens, and while I was flipping through the pages, all of a sudden there it was: my next pen, the Visconti Van Gogh. Visconti based the Van Gogh collection on the color palette used by this impressionist painter. I fell for the version that seemed to have been carved from Italian marble, but was in fact a natural resin.

This first version was a bit different from the Van Gogh model that Visconti now sells. For starters, the cap had a unique closing mechanism that worked on pressure. A quarter twist of the cap was enough to open or close it.

This element was actually invented and patented by Mercedes-Benz and put to good use by Visconti. Mine has always worked flawlessly, but some have complained that the cap would loosen by itself, which led Visconti to return to a traditional screw cap. 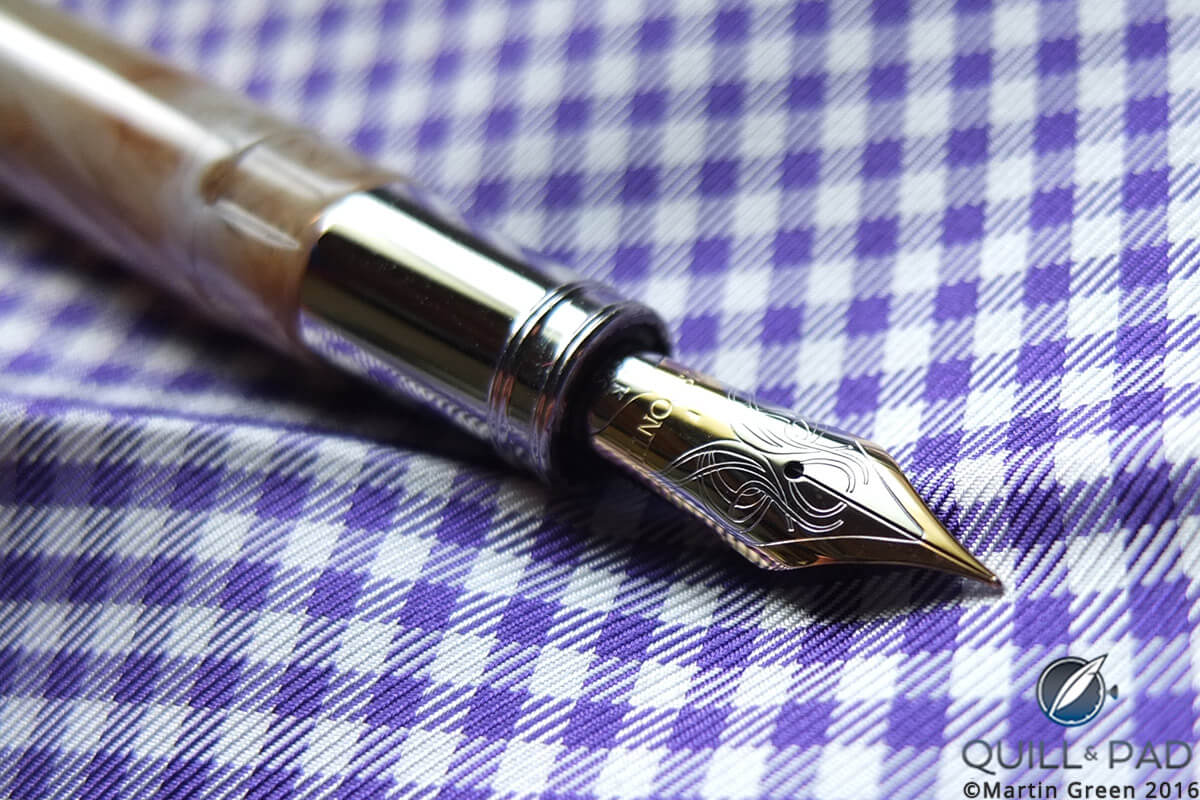 Visconti has meanwhile also replaced the nib, regardless of the fact that the original two-tone gold nib was a thing of beauty! Not only was it beautifully engraved, it was also a very responsive writer.

The Visconti was, and remains, perfect in many ways, and I wasn’t looking to replace it; however, I found myself walking through the medieval center of a European city when my eye fell on a high-end pen store that was going out of business. A sad thing in itself, entering it made me feel partly like a vulture and partly like an explorer. Both actually came together once I entered, because I walked into what felt like the tomb of Tutankhamun. It was wall-to-wall with unique limited editions, pens that I had never seen, and many I would never, ever see again. One that stood out was the Visconti Taj Mahal, a 1995 limited edition with gold filigree on the barrel.

But unlike a 1930s explorer having discovered an ancient tomb, I could not raid this store. Even the heavily discounted prices were still too much for a college student like me at the time.

However, I did not leave the store empty-handed, having adding two pens to my collection.

The author’s Omas Paragon fountain pen with cap off

In addition to the Taj Mahal, the second was an Omas Paragon that I actually liked very much because of its signature 12-sided barrel. It had an interesting number engraved on the barrel in Roman numerals, and it took me years to find an Omas collector who could actually tell me what it meant. It turned out that I had purchased an early limited edition pen by Omas from 1988 to commemorate the 900th anniversary of the University of Bologna. The nib of the author’s Omas fountain pen

Though the Omas was a great writer, especially since its barrel provides not one, but two, natural places to put your fingers, I did end up buying another pen: a green Visconti Manhattan Wall Street. This was a very striking pen, but that is not all: it was fitted with Visconti’s high-vacuum power filler. An especially novel piece of technology in the day, it was also the reason I abandoned this very comfortable pen as a daily writer. The high-vacuum power filler requires some strength to operate, making it a two-hand job with no hand left to hold the ink pot. Great technology, but lacking in practicality, which made filling it feel like a chore instead of pleasure.

But then I got bitten by a crocodile: Italian brand Delta’s Animal Collection features a detailed animal serving as a clip. For some reason still not clear to me, I find crocodiles and alligators fascinating animals. So I picked up the Delta because it was dedicated to these fearsome creatures. The Delta is a pen of contrasts: a very fat and sober-looking barrel with a cap containing flakes in every shade of green, on top of which rests a crocodile sculpted in vermeil. The pen turned out to be a great conversation piece, but more than that it introduced me to Delta as a brand. Not only did the barrel fit very nicely in my hand, but the nib was as smooth as butter, unlike any I had ever experienced before. This excited me so much that I set out to obtain what I thought was the biggest, boldest, baddest Delta there was . . .

Gold, black, and bright orange: give these colors to anyone else to design a product with and the result will without a doubt be very gaudy. Give it to Italians and they make the Delta Dolce Vita Oversized, a pen fit for Caesar! With a bright orange center piece in the barrel that seems to resemble hot lava from Vesuvius, this pen is made to look even more dramatic by the use of black resin on both ends. It is decorated with an engraved ring around the cap in vermeil, a design that seems to have come straight from the villa of a nobleman in Pompeii. The outsize nib of the Delta Dolce Vita Oversized

The term “oversized” does not only apply to the pen itself, but even more so to the nib, which measures more than 2.5 centimeters (1 inch) in length. To me, this pen reigned supreme, even over the previous Delta.

As you might notice, I have acquired a lot of pens “by chance”; this was one I actually acquired on purpose.

With watch friends I often talk about how we would view certain watches if we had been able to keep our initial sincere, slightly naive approach to the topic. I went so fast and so deep into the watch industry that before you knew it knowledge and background information had distorted my view.

Knowledge is, of course, never a bad thing, but innocence also has its own beauty. The world of fountain pens allows for this. There are fewer risks, fakes are uncommon (and only focus on the really well-known models), and in a technical sense a fountain pen is far more straightforward.

Of course, you do pick up knowledge along the way, and experience does guide direction. That is why my Italian period was already far more focused than my all-over-the-place period.

But after years of using the Delta Dolce Vita Oversized as a daily writer, I would eventually replace it with something unexpected, the beginning of my luxury brand period. You can read about that phase in The Quest For My Ultimate Fountain Pen Part 3: The Luxury Brand Period.

For  how I got to my Italian period, please see The Quest For My Ultimate Fountain Pen Part 1: The All-Over-The-Place Period.

* This article was first published on September 28, 2016 at The Quest For My Ultimate Fountain Pen Part 2: The Italian Period.