You are here: Home1 / Luxury, Experiences, Science & Nature2 / Sochi Winter Olympics3 / The Radio Room: Russian Watches In Action (And How The Titanic Changed...

A glorious week in, and the Olympic games in Sochi still have many more days of history to create! The excitement is contagious with every news outlet seemingly discussing some aspect of the games.

But today I would like to discuss something a little different, though related, something that was sparked by disaster and created a legacy, especially in Russia, with regard to the design of clocks and watches in telegraph and radio rooms ever since. The year is 1912 and it’s a cold April night as the Titanic speeds its way through iceberg-infested waters in the north Atlantic. I’m sure you all see where this is going so I will spare you further James Cameron-esque imagery and simply remind you that tragedy struck the luxury liner in the form of an iceberg, dooming what was thought to be an “unsinkable” ship.

Thousands of lives were lost needlessly and not simply because the ship sank; many factors aided in making that night a true tragedy instead of simply a failed voyage. One of those factors was communication and the complete lack of regulation over an international system.

That night there were huge amounts of chatter over the radio waves, and as the Titanic sent out its distress signal she found it hard to get through to other ships. The ones that it did get through to were either too far or too late.

Because of the ice, a few ships simply couldn’t come without risking their own hulls. In the aftermath of investigations that followed, it was found that poor (or nonexistent) regulation over the use of radio signals, especially those at sea, were partially to blame. Building off the Berlin convention of 1906, the United States, with other countries following suit, passed the Act to Regulate Radio Communication in August of 1912, which became more widely known as the “Radio Room Act.”

This act stipulated, among many other things, that radio rooms on the shore or any sea-going ship must be manned 24 hours by a minimum of two trained and licensed operators so as to intercept any and all distress signals.

Random Radio Communications History Side Note: The Berlin convention outlined many international wireless telegraph regulations including the requirement that any and all communications must cease once a distress signal is received, and no communication can commence until “after it has made sure that the correspondence to which the call for assistance has given rise is terminated.” (International Wireless Telegraph Convention, November 3, 1906)

Where the Radio Room Act made the most difference to safety and clock and watch design is seen in how it implements required “listening” intervals. Not specifically detailed in the act itself, but agreed upon later by countries around the world, these intervals would last for three minutes and occur at the top of the hour and half-hour.

During these time periods, all radio communication would cease as operators would simply listen for distress signals from a broad range of frequencies. Later amendments required these listening intervals every fifteen minutes for better coverage and reduced risk of missing a distress call.

Now to the interesting part, the clocks and watches! According to the act, operators in every radio room on shore and on vessel needed to be aware of these time periods and make sure they abided by them simultaneously for the system to work as designed.

The easiest and best way was to design a clock dial, and later watch dial, clearly outlining these periods. Imagine a pie plate with four thin slices missing every ninety degrees and you would have the design of the radio room dial.

At every quarter, there would be a three-minute sliver marked in contrasting color to clearly identify the “radio silence” periods. Originally these were white dials with red slices, though there is a red and blue European version that was produced as well. This design, which eventually made its way onto wristwatches, was in radio rooms all over the world. With Russia being such a large part of the world, you can imagine it had a strong history with these clocks. In fact, Vostok Watch Makers, Inc. was the primary supplier of radio room clocks to the Russian navy (and pretty much any other ship or radio room in Russia) for decades.

You might remember the Vostok name from A Short History Of The Russian Watch Industry And Where It Is Today. Founded as a second facility for the First Moscow Watch Factory in Chistopol in 1942, it was officially renamed Vostok Watch Factory in 1969 presumably after the success of the Soviet Vostok space program.

Vostok-Europe of Vilnius, Lithuania, separate from Vostok Watch Makers Inc. based in Chistopol, was founded in 2004. Its watches utilize Russian Vostok movements – now among other calibers of varying origin – in rugged and extremely modern designs.

In 2012, and truly the brainchild of Détente Watch Group President Craig Hester, Vostok-Europe debuted a modernized, stylized version wristwatch paying homage to the radio room clocks of old. I must say that this watch is really something different: it is outfitted with a Russian Vostok 2426 automatic movement and water-resistant to 200 meters. Its PVD-plated stainless steel case measures 46 x 17 mm and it contains a 24-hour dual-time function.

All in all, the Radio Room is a pretty functional timepiece.

Russian history is full of machines that do the job well and offer extreme ruggedness. There are stories of World War II Russian tanks pulled from lakebeds that only need a sound servicing to run as good as new. They were built strong and hardy, and Vostok-Europe’s Radio Room watch feels a lot like that. It wears more like a tool than a piece of jewelry, sitting proudly on the wrist waiting to inform you when it is time to shut your mouth and listen. Because, even though you might not work in a radio room at sea it doesn’t mean you can’t learn something useful from the Titanic’s mishap.

But in all seriousness, this is an attractive instrument timepiece that resembles not only radio room clocks (of course), but also the larger field of gauges and indicators that one might see on ships or in large pieces of equipment. With its large luminous arrows (and other amazing lume) on the dial and striking red “radio silence” zones, I feel like I am wearing a high-pressure gauge on my wrist. The rugged dodecagonal case with ratcheting bezel does remind you it’s a watch, with said bezel boasting a 24-hour scale to accompany the second time zone hand.

Inside is where the magic happens, though: here a well crafted and decorated Russian Vostok 32-jewel automatic movement made by the same company that manufactured radio room clocks and watches for the Russian military for around 50 years ticks away.

Right there is some sound Russian history sitting on your wrist, and aside from that, it looks like a well-designed and unique movement. Since it is not claimed to be a certified chronometer, I did have any preconceived ideas about accuracy with a stated mean daily rate of -10 to +30 seconds per day. But I’m happy to report that after 7 days in my rotation, it is within 20 seconds of where I originally set it. That is some darn good timekeeping from a rugged tool watch like the Radio Room. If there is to be a downside, my opinion is it would be linked with the size. I have an average wrist size, so fitting under shirt sleeves for me is a resounding “nice try.” If you wanted this watch to take the place of your ultra-thin anything, you will be disappointed.

But you’d also be silly to expect that from a watch as rugged as this with its 200-meter depth rating and oversized PVD steel case. This is for a man (or woman) who wants something that can take a beating in any environment and just keep working. 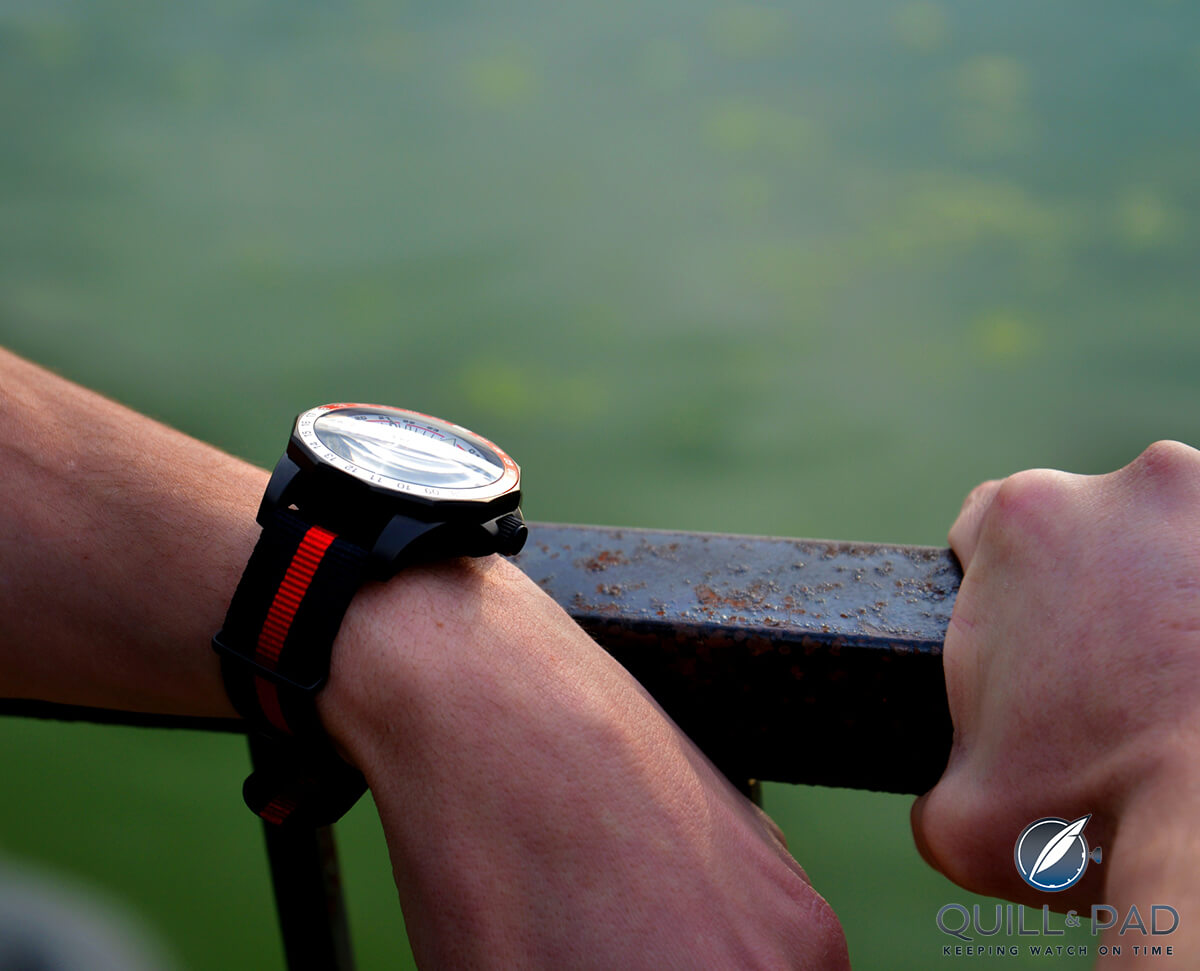 So it seems that the Russian spirit of strong and capable machines lives on in this definitively modern brand. I for one really enjoy this piece and the story behind it, but most importantly, for the movement inside it.

I love mechanics, clever mechanisms, and ingenious functions; and ultra high-end watches make me drool. But as much as I love minute repeaters and double rattrapante chronographs, I will always have a love of tools big and small, precisely delicate or ruggedly solid. An old lathe or a rebuilt tractor; a precise, vintage rose engine; or a finely crafted antique lock: all tell the story of the craftsman that built them or the ones that used them. The same goes with mechanical watches: all have great value, but some for very different reasons. Some watches have no business being in the shop where I spend most of my days, but with this piece, it is just as at home next to my milling machine as a wireless telegraph in the bowels of a ship.

As this final week of the Olympic Games in Sochi, Russia unfolds, enjoy the culture that put the first man in space and can build tanks that enjoy a good mud bath. Russia has a great history, and there’s never been a better time than now to appreciate what its culture has to offer. It reminds me that we aren’t all that different after all. Especially if we all speak the language of watches!

I would like to thank our friends at Détente Watch Group for their assistance with this piece and for sending over a great example of modern Russian-style watchmaking that won’t break the bank in the Radio Room. If you want to learn more about Russian watches and what is available, head on over to www.detentewatches.com.