You are here: Home1 / Watch Brands & Horology2 / Breguet3 / How It’s Made: Inside The Breguet Castle Of Complications

Not everyone gets to check out Breguet’s factory from the inside, and those who do generally don’t get to take photographs of what they see. This modernized factory in the heart of the remote Vallée de Joux with its many annexed hallways, secretive doors and interesting manufacturing capabilities has long been a jealously guarded secret. 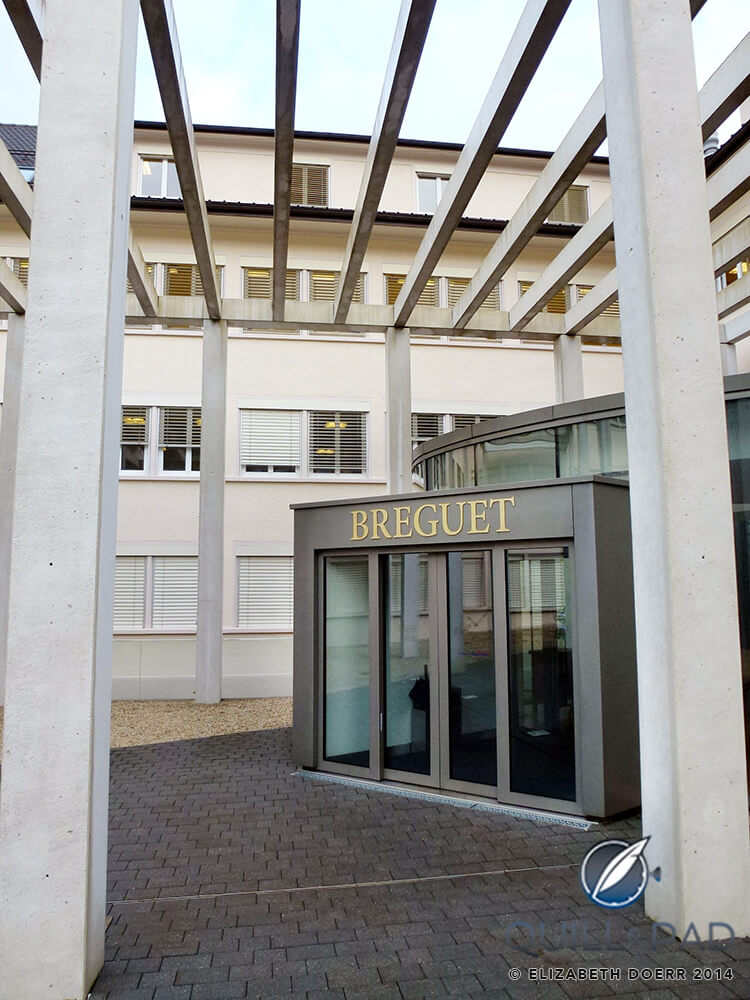 Entrance to the Breguet manufacture

Perhaps part of the reason is that when you saunter through the grand doors of Breguet, you may not realize that this location used to be called Nouvelle Lémania. Lémania, founded in 1883 by Alfred Lugrin as a pure movement maker in L’Orient, was bought by the same group of investors who owned Breguet in 1992 (who rebranded it Nouvelle – “new” – Lémania SA).

Nouvelle Lémania continued to produce movements for other brands – particularly with Swatch Group-owned Omega, with whom it shares a long history – but became directly associated with Breguet in the modern era by virtue of its chain of owners. When the Swatch Group purchased Breguet in 1999, it also took over Nouvelle Lémania. 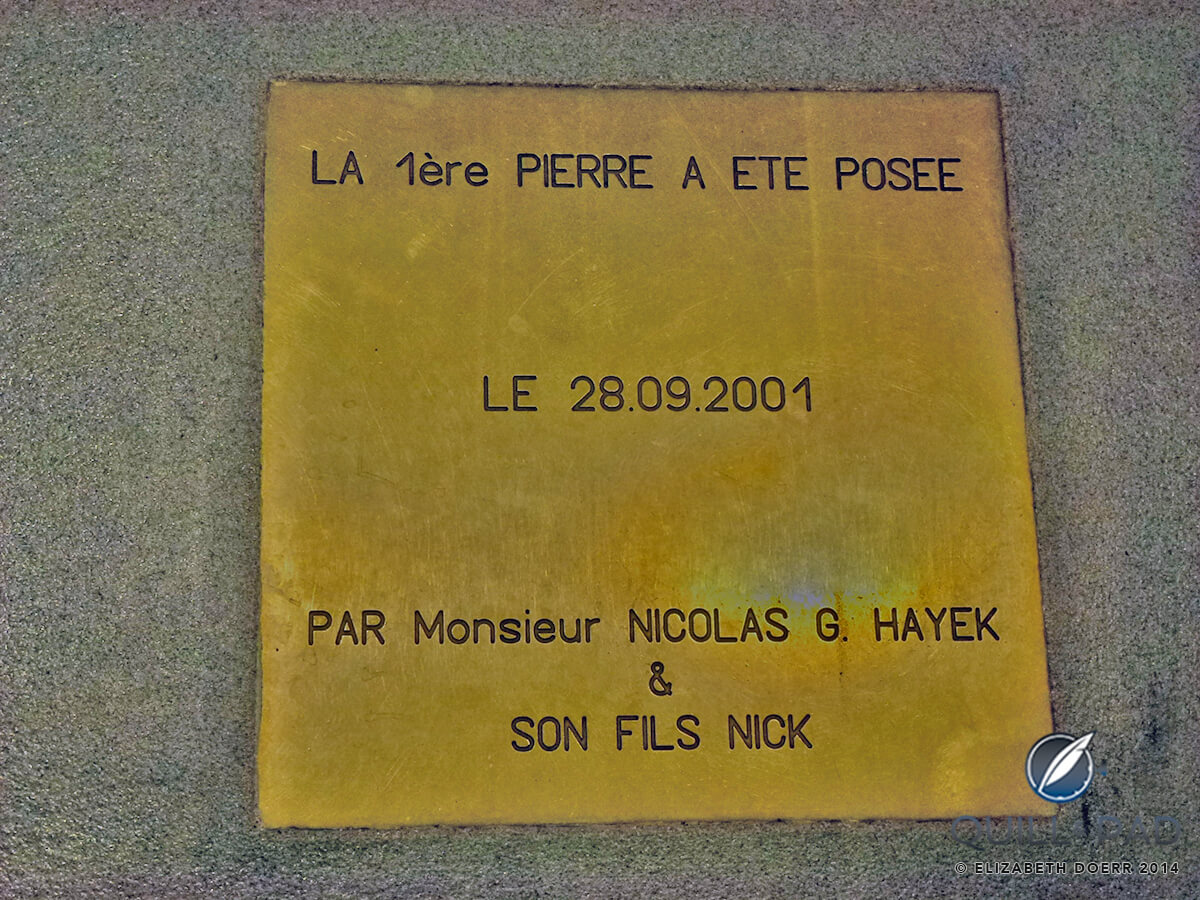 Commemorative plaque in floor outside new annex to the manufacture: “The first stone laid on September 28, 2001 by Monsieur Nicolas G. Hayek and his son Nick”

In 2001, Nicolas G. Hayek added a beautiful new annex to the building now housing his group’s crown jewel and renamed it Breguet Manufacture. This is commemorated by a plaque embedded into the floor of the factory that reads, “The first stone laid on September 28, 2001 by Monsieur Nicolas G. Hayek and his son Nick.”

Breguet began extending buildings again in 2011 due to increasing demand and growing space needs. Yet another 8,000 square meters are planned to be finished toward the end of 2014 to house state-of-the art facilities and employees.

Much ado has been made over the years about the resuscitation of the handcrafts such as guilloche that have now found a home at Breguet Manufacture. Thus, one easily forgets that this enormous factory with hundreds of employees also integrates all the steps needed to make a movement from the ground up.

This begins on the ground floor in the materials department, where we find reels of brass and steel needed for the CNC machines to mill and drill plates and bridges.

Even the raw movement materials are of the highest quality, as the head of movement production once told me. Indeed, back in the day, he was specifically ordered by Hayek Sr. to “make the nicest products in the world and to protect the environment at the same time.” It’s got the look

The look of a Breguet watch is perhaps the most important part of its branding thanks to concepts and ideals laid down by Abraham-Louis Breguet right at the beginning. The smallest characteristic details put the entire history of one of these watches on display, ensuring that the client understands it is of the highest quality of the Swiss art of watchmaking.

Therefore, the rooms housing the specialists for finishing techniques are among the largest in the whole factory. Anglage is very important to high-end finishing, and Breguet boasts at least 40 employees proficient in the art of it, all working in an extremely large and well-lit room.

Blued hands, a signature element of Breguet timepieces, came about through Abraham Louis Breguet’s idea of “la lecture simple” (“easy reading”). Blue, rather than gold, hands are simply easier to read against the backdrop of a light-colored dial.

While in Breguet’s time, and indeed even today in some small workshops, steel hands were tempered over an open flame, in the Breguet factory today they are blued in an oven to ensure the consistent cornflower blue coloring. The guilloche department at Breguet

And then there is the guilloche, which is perhaps the single most recognizable element of a Breguet timepiece. All Breguet watches have some form of typical guilloche on their dials except the Type XX and Type XXII models and some embellished with mother-of-pearl. And all Breguet dials are made of solid gold except for the Réveil (alarm) models, which need brass to expedite resonance.

Breguet therefore needed to train its own craftsmen in the art of guilloche since the sheer numbers it needed exceeded the capacity of Switzerland’s lone craftsmen and dial makers back in the early “noughties.” The quartz crisis, of course, caused many of these artisanal crafts to nearly become extinct. Today, there is a room in the Breguet factory looking out on the rolling hills of the Vallée de Joux that holds not only several vintage rose engines and straight cutters, but also at least eight new machines created by Breguet’s own toolmakers.

The hand-operated machinery needed for guilloche has not been manufactured for about 50 years. The creation of each dial can take up to eight hours depending on the chosen pattern, and Breguet’s needs still exceeds its own capacity, so the factory continues to receive some made by outside craftsmen.

Each Breguet dial is also marked with what Breguet calls the “single number.” This is the number that guarantees the timepiece’s origin and provenance. Breguet tourbillons being prepared for assembly into movements

Abraham-Louis sold about 30 tourbillons during his lifetime; naturally an exponential number of them in the very early 1800s.

Therefore, it should hardly come as a surprise to learn that Breguet is the largest producer of tourbillons in the western world today. The Swatch Group does not communicate numbers, but industry insiders estimate that this brand produces between 1,000 and 2,000 tourbillons per year.

The tourbillon department therefore employs twelve watchmakers who assemble the movements using pre-assembled subgroups. A simple tourbillon takes each one three days to complete, most of which is spent solely on the reglage. Fifty percent of these gifted watchmakers are women.

In the past decade, around 95 percent of the collection has been replaced with new models, and at least one completely new movement is introduced every year. One of these from 2013 was La Musicale, which you can hear playing its music in the short video above. Within this time period the number of employees has also increased from 250 to more than 1,000, even though Breguet manufactures less pieces per year than, say, Patek Philippe. And more than 100 patents have been registered.

Marc Hayek has told me several times over the past couple of years that the forward push toward ever more innovative products outside the tourbillon is completely in keeping with the original inventive spirit of Breguet. And I’m sure it is.