One year ago today, on a crisp and sunny New Year’s Day in Central Europe, Quill & Pad quietly went online. Looking back, I’m relatively sure that Ian and I had little idea what we were really getting ourselves into, but I do know that we were extremely enthusiastic.

However, one thing was crystal clear both then and now: we both loved watches and we were both really excited by the idea of sharing our passion and knowledge for the subject. Baselworld is easier in comfortable shoes

Since then, we have added four knowledgeable contributors with distinct areas of expertise to our little band of merry men and women − Joshua Munchow (technical nerd), GaryG (collector), Nancy Olson (pens), Boris Pjanic (vintage) − and together we have posted approximately 300 original stories. We have traveled to every habitable continent (Americas, Europe, Asia, Africa, and Australia) in search of the most interesting stories.

We have taken part in automobile races and exhibitions. The Quill & Pad Ferarri at the 2014 Pebble Beach Concours

We have interviewed celebrities and collectors on their love of watches. We have learned how to paint and fire enamel dials.

We have watched as the world’s most famous watchmakers assemble their timepieces.

And Joshua Munchow even made his own wristwatch and told you all about it in Making My First Watch: Adventures Of A Beginner.

We have discussed industry events and fairs in numerous round tables and taken part in the prestigious Grand Prix d’Horlogerie de Genève, spending weeks publicly debating the selected watches in each category along with invited guest writers. And we have spent in excess of three full weeks at various trade fairs like the SIHH, Baselworld and SalonQP to learn about the latest timepieces and stay connected. We have given away amazing, unique prizes like the Greubel Forsey Meccano model and a one-of-a-kind fountain pen embellished with urushi lacquer.

We have visited factories, suppliers, workshops, boutiques and auctions. One of my favorite photos of 2014: the lume shot of Stepan Sarpaneva’s Korona Moonshine

In additional to watches, we have reviewed books, pens, and stationery. And we have worn test watches so as to provide you with live, on-the-wrist reviews; these have so far included Habring2 Felix, Rolex Sky-Dweller, Maurice Lacroix Square Wheel Cube and Masterpiece Mystery, Jaeger-LeCoultre Geophysic, and Stepan Sarpaneva’s Korona Doublemoon. And we have brought you stories out of the long history book of watchmaking, both somewhat more recent (like François-Paul Journe’s involvement with Piaget) and somewhat more ancient history (like the first ladies’ watches recorded). The intricately engraved and decorated case of the Pomander Watch

We have offered controversial topics for discussion (like the Peter Henlein Pomander Watch from 1505, which we will soon bring you more news of) and provided you with honest opinions (such as those regarding the Grieb & Benzinger Blue Merit). We have shown you some of our own very favorite personal timepieces (like Ian’s JDN and my Martin Braun Eos Boreas as well as almost the entirety of GaryG’s extensive treasure chest). 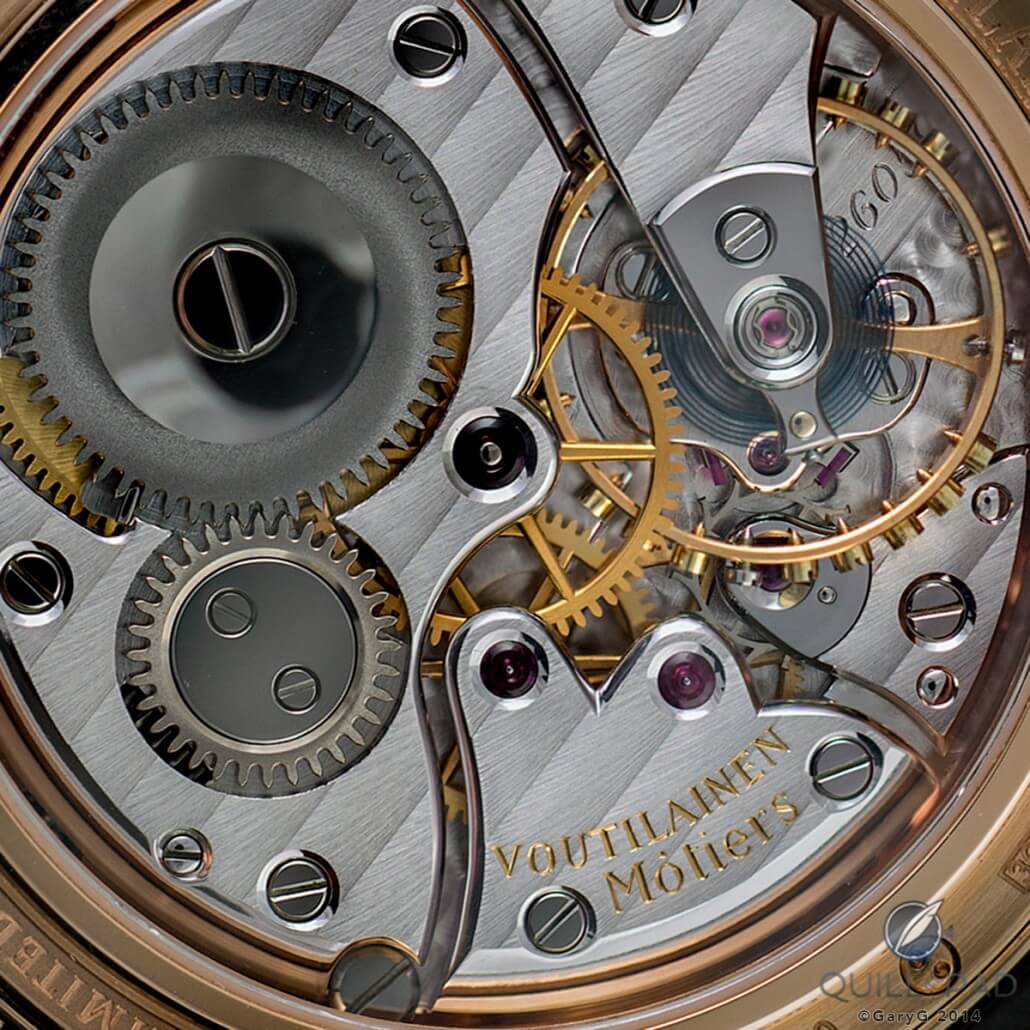 You be the judge: how do you like the finishing on this Voutilainen Observatoire?

And we have brought you technical topics that dig deep into the art of watchmaking on subjects like fine finishing, dial making, jump hour complications, 3D printing, tri-axial tourbillons, enamel and the origin of gold.

Here at Quill & Pad, the majority of stories are created by a writer’s interest in the topic. This means that in just about every case, there is a story behind the story. Thus, we have learned a lot about our colleagues. Joshua has proven to be quite a poet, for example, as his odes to the three-quarter plate and the muses he imagines behind the beauty of De Bethune’s oeuvres clearly show.

GaryG has astounded us time and again with his breathtaking photography and passionate love of timepieces. His stories have been a true joy to read. We have known Nancy already for a very long time and have had the pleasure of working with her at iW for years. Her expertise in pens was always clear to us; it’s nice to see what her particular personal favorites are, though. Exquisite dial details of the Jean Daniel Nicolas Two-Minute Tourbillon by Mr. Daniel Roth, the timepiece that brought Ian Skellern into the world of watches once and for all

It is the personal stories showing me so much about the person behind the photo that I have personally loved best. Ian’s heartfelt story of the acquisition of his JDN in The Watch That Changed My Life: The Jean Daniel Nicolas Two-Minute Tourbillon By Daniel Roth, which is the timepiece that brought him into the world of watches, was an amazing read and allowed me to get to know him even better. I also sniffed a few genuine tears away when I read GaryG’s Love, Loss, And Watches: Jaeger-LeCoultre’s Tribute for the first time, which wasn’t actually cool, because I had just sat down for a break during an exceedingly hot day while visiting the Leica factory.

Maybe, too, it was the fact that Jaeger-LeCoultre was involved; from the first day of my own involvement in the horological world, this has been hands-down one of my own favorite brands, and I associate quite a bit of my own personal state of being with it. The case back of Joshua Munchow’s watch on a fixture after milling, before finishing

I always knew that Joshua loved watches more than just about anything, but the story of making his own watch really moved me. I could literally picture the scene and feel the frustration as he attempted, failed and succeeded. If you’ve ever tried to teach yourself something big, do read Making My First Watch: Adventures Of A Beginner.

And, without the restriction of word count and editor demands, I have discovered the joy of allowing a bit of what of what I feel to flow into my texts rather than just telling the neutral story. It’s been quite a personal revelation.

And, whew, it’s been quite a year.

The reality is, however, that none of this exhausting fun would have been possible without you reading and sharing and without our partners understanding, supporting, propagating and taking part in something that is not only our passion and hobby, but also our vocation.

We hope that together we can make 2015 even better. Though, admittedly, that will be a little hard as thanks to your support, 2014 far exceeded our expectations . . . and then some!

And we’ve only just begun, watch this space as we continue to keep a watch on time.