I had gotten wind of a new “brand” (actually, more of a new small independent than a serious brand), and was heading down the street from Baselworld’s Hall 1 toward the local Starbucks to meet with the founders. Yep, you heard right. Starbucks.

To say that Hautlence has come a long way since that chilly March day when Guillaume Tetu, Renaud de Retz, and I sat over an American coffee in Switzerland and examined the minute details of a watch, the likes of which had not yet been seen in Swiss watchmaking, would be putting it mildly.

In the ten years since, Hautlence has basically experienced its own birth, middle age, near death, and reincarnation.

That’s quite a lot of history for any ten-year-old brand. The Hautlence HL, the brand’s first model launched in 2005

The original Hautlence timepiece, known as the HL, included some interesting technical aspects such as a jump hour display and a “connecting rod” for the retrograde minutes.

Remember, developing one’s own movement in the early 2000s was not something that many brands were doing. The originality and mechanical beauty of it inspired great emotion, as did the impassioned explanations of its young makers, Tetu and de Retz.

It was in great part the complicated, detailed design that made the original Hautlence timepiece and all the extensions and versions that came after it so widely appreciated among connoisseurs.

Things seemed to be going well for the young Hautlence founders – who had named their brand as an anagram of the company’s Swiss hometown Neuchâtel – until the economic crisis of 2008.

This difficult period, occurring after an unprecedented boom in luxury goods, caused a lot of changes in the Swiss watch industry. It also caused a few start-ups to change their course in some way.

Naturally, Hautlence was also affected, and unfortunately negatively. So much so that it never really recovered.

Around 2009 de Retz left the company; Tetu continued to fight for Hautlence. By 2012 it became apparent that Tetu would not be able to hold it and Hautlence looked like it might disappear. It was at this point that former Audemars Piguet CEO Georges-Henri Meylan entered the picture. Meylan had retired, then discovered that he didn’t like playing golf day in and day out. He had an investment company MELB, which to that point had invested in real estate and medical technologies, and looked to branch out.

Naturally, as the previous CEO of Swiss giant Audemars Piguet, watchmaking wasn’t far from his mind, so it wasn’t a stretch to create a division for small watch companies.

Almost simultaneously, MELB acquired the nearly destitute Moser & Cie, Precision Engineering and then Hautlence. MELB had already created a distribution agency in Asia for a few small, independent boutique brands such as Hautlence and De Bethune.

MELB, which is fully owned by Meylan and his family, came to Tetu’s rescue by buying Hautlence for $1 plus all of its debt. From this day: a brand

September 2, 2014 was the day that Hautlence started its new lease on life in earnest. After two years of reorganization, and above all restructuring its goals and positioning, which needed the skills brought by Tetu’s product know-how as well as MELB CEO Bill Muirhea’s strategic ability for branding, this day represents the kick-off for the “new” Hautlence.

“This is a very big day,” Tetu concurred, the excitement showing in his eyes despite the weariness caused by all the preparation and the night of relatively hard partying before.

The celebration part of this launch was very important for all the employees of MELB, from the top down. This was emphasized for one by the presence of all key MELB employees (the entire management of Moser was on hand in Neuchâtel during the two-day launch in addition to that of MELB and Hautlence) and for another by the fact that the launch began with a party rather than the business end, signaling the fact that Hautlence feels it has much to celebrate just by (still) being here. Eric Cantona came to Baselworld in 2014 to chat with Tetu and take a look at the collection, after which he reconfirmed his willingness to become Hautlence’s new brand ambassador.

But why did they contact Cantona of all people in the first place? When Tetu, Muirhea and Meylan were working out the brand direction, they settled on building around the design idea of “we don’t care what anyone else thinks” that they culled from looking at masculine, devil-may-care Harley Davidson marketing over the years.

Thus, they came up with the idea of the “cross the line” tagline and the “gentlemen’s rebel club,” which they use to describe owners of Hautlence timepieces.

Then, they took the idea a step further. Who would they get to be the gentleman rebel face of the new Hautlence; who would Tetu envision this to be? Cantona, naturally, was the answer. A charismatic, controversial, artistic, and above all a passionate, swaggering type of showman.

Now, here’s the interesting thing about this particular ambassadorship. If you follow soccer at all, you’re likely to remember Cantona from his active days at Manchester United, where he played a key role in the club’s renaissance after transferring to England from Nimes. He is widely regarded as having been Man U’s best player of all time. He also played for the French national team from 1987 through 1995.

After retiring from soccer, Cantona became an actor and a very, very famous French personality. He is also an artist.

His fame is more or less centered in England and France as well as Asia. But he is virtually unknown in the Americas, a fact that easily tells you the direction that Hautlence is working in as a primary goal. In case the light bulb hasn’t gone off yet, the news that Hautlence is opening a stand-alone mono boutique in Jakarta next year is another clue.

Cantona repeated several times throughout the afternoon how proud he was to be part of Hautlence’s revival. And then he introduced the watch he co-designed with Tetu. 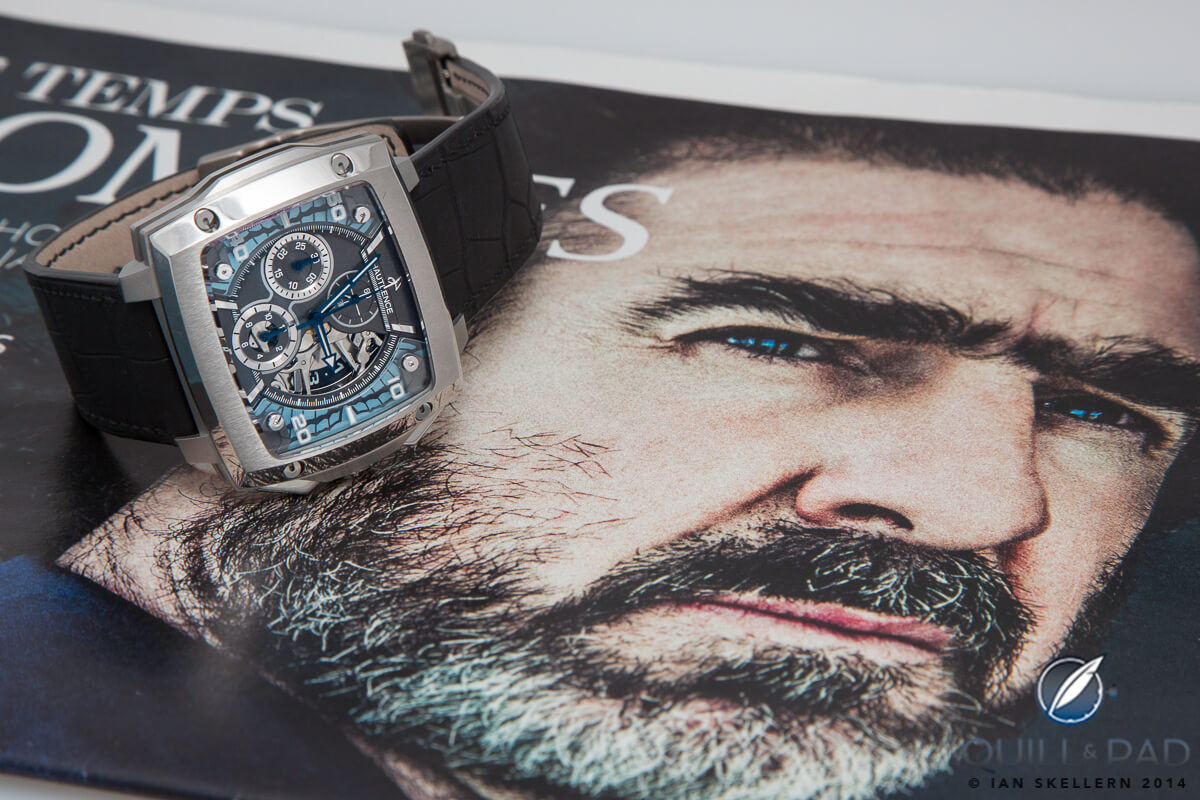 Of butterflies and men

Cantona’s co-creation is not only the very first collaborative watch Hautlence has ever produced, but also its very first chronograph.

Even more remarkable: like last year’s Destination, it contains an externally produced movement comprising a Dubois Dépraz module on an automatic Soprod base. For a brand positioned as a high-quality “independent” for nearly a decade, the more “entry-level” (at around $25,000, entry level remains indeed relative) idea of an outsourced movement housed in a typical Hautlence-look case might be a bit shocking.

Tetu, however, reveals that this is part of a bigger product strategy that will help him and his team achieve the “brand” status more quickly. “We are completely comfortable using external movements,” said Tetu. “And this may help us to become the first niche brand to find its way onto the wrists of ‘normal’ consumers.”

The idea, in fact, is to continue the mechanical creativity that Hautlence began its existence with on two levels: creations of mechanical exception like the HL2.0 as well as the “atelier” line of HL timepieces powered by manufacture movements and assembled with great care in Hautlence’s own La Chaux-de-Fonds workshop. Tetu relates that the Destination has been Hautlence’s most successful timepiece yet in terms of sales, and that neither the relatively large difference in price from the “usual” collection nor the use of more ordinary movements have done anything but increase sales. This is indeed a victory of sorts.

“People are buying design at this point,” he said. “They didn’t really care about the movement.”

The chronograph surprised me in its whimsical background: for such a hard-looking guy, Cantona seems to really have the heart of an artist. Around the fringe of the chronograph displays, which form a round dial despite the oblong rectangle of the heavy case, we just recognize the patterned wings of the morphos butterfly created in shimmering blue mother-of-pearl and black printed patterns. It is easily discernible as a butterfly. Again, this surprised me. However, Cantona said, “Every second of the day is a metamorphosis of sorts.” And the color blue holds a different message for each and every one of us.

Deep. And whimsical. But masculine? Well, yes. Have a look at it and decide for yourself. Cantona is a major collector of street art. To emphasize the artistic points of the Invictus Morphos, Hautlence decided to create an exhibition mixing the brand’s iconic pieces from the last decade with paintings from Cantona’s collection. Hautlence has naturally always referenced architecture and design in the very core of its watches’ appearance.

The exhibition will go on a world tour that began in Neuchâtel over these last two days. This way, everyone will have a chance to see for themselves.