The Italians are a decorative people, with a history of art and design going back hundreds and even thousands of years. Notable artistic works date all the way back to the Etruscans of 900 to 200 B.C.E., while the most famous period is the Italian Renaissance. The Renaissance brought forth the masters we all know like Donatello, Michelangelo, Raphael, and da Vinci, sprouting a culture of impeccable and impressive design and artistic depiction.

Thanks to these men the world was gifted with works of immeasurable beauty like the statue of David, the Mona Lisa, the Sistine Chapel, and the School of Athens, not to mention thousands of other incredible pieces of design, sculpture, and architecture to inspire future generations.

These future generations were no slouches when it came to artistic expression, either. ”New” masters like Caravaggio, Reni, Bernini, Brunelleschi led the way to twentieth-century masters like Modigliani and Boccioni. This small sampling is by no means a full representation of the influence the Italians have had on art and design over the last two millennia, but it is enough to provide weeks of intense study on the topic of art history.

The Ferrari P4/5 by Pininfarina

And it doesn’t even begin to scratch the surface of some of the more recent Italian designers that many actually connect with like Armani, Versace, Prada, Ferragamo, Bialetti, and Pininfarina. I’m sure if the above-mentioned names didn’t ring any bells then those just might have.

The entire world is awash with Italian design inspirations; truly, this nation can be considered a leader in the decorative arts.

And this doesn’t stop with making beautiful paintings or designing incredible furniture; Italians like to embellish any fine product with an even finer artistic technique to take it to an entirely new level. You heard me: Italian shotguns, otherwise known in the gun collecting world as some of the most beautiful shotguns known to man. It could be because they are generally handmade with hand-shaped stocks and exquisitely finished surfaces, but it could also be because they tend to be embellished with incredibly fine handcrafted engravings of the highest quality. I’ll put my money on that second one, yup. This engraving, referred to as bulino engraving (named after the Italian word for burin, the engraving tool), is an incredibly delicate and subtle engraving technique comprising very small dots or parallel lines cut into the surface at different depths and sizes to create a range of gray tones that represent shading. This technique is most useful for pictorial depictions that could almost resemble a black and white photograph for the amount of apparent shading that is the result.

And that result is usually stunning and a work of art in its own right. It is also the technique that was used to create the case engraving on the new Panerai Radiomir Firenze3 Days Acciaio, a vintage-inspired special edition that has me thinking Italian. I didn’t have to wait too long because at SIHH 2015 Panerai released a limited edition Radiomir with the same case dimensions as the first watch created back in 1936 with a lovely little addition: complete case engraving in the bulino style.

I immediately sat up and took notice. I mentioned when writing about the Radiomir 1940 that I liked it because it felt different from Panerai’s normal offerings and had a definite feeling of vintage, which I didn’t really get from the brand’s normal collection timepieces.

This Radiomir Firenze 3 Days Acciaio exudes that same feeling to me, partly because it uses the original case shape (which is definitely vintage-inspired), but mostly because it utilizes a traditional engraving technique combined with motifs that simply sing old-world charm. Engraved dials or movement plates are one thing, but engraved cases are older than old school; they are first-class antique. Once modern production techniques came into play and cases weren’t entirely made by hand anymore, many of the old techniques were abandoned in favor of new designs made possible by modern techniques. Thus, hand-engraved cases gave way to clean lines and tooled edges. This is why a modern watch with a hand-engraved case is something unique: it mixes the old with the new in a way that is (only now) unexpected. This is because we have experienced a hundred years of design cues inspired by modernism, cubism, art deco, and Bauhaus, not time-tested intaglio techniques (the Italian word for an entire type of art: printmaking). There is nothing wrong with these design cues, and appropriately they have inspired some of the greatest watch designs of the last century. But to take a modern watch (the word modern used relatively) and combine a decidedly Bauhaus dial, a modernist case shape, and classical engraving techniques is a juxtaposition of time periods that makes a viewer take notice. I say viewer because this piece is more art than watch. Not because it is not a functional timepiece, on the contrary, but because its form has almost superseded its function to become something one views and experiences instead of simply wears.

The process of bulino engraving starts with a fully finished case in 316L stainless steel, which is prepared with magnesium powder or chalk to mark the patterns and outlines of the areas to be engraved. A series of different engraving tools – burins – are used to successively cut thin lines into the surface until the entire area is emptied of the metal that is not part of the finished sculpture. 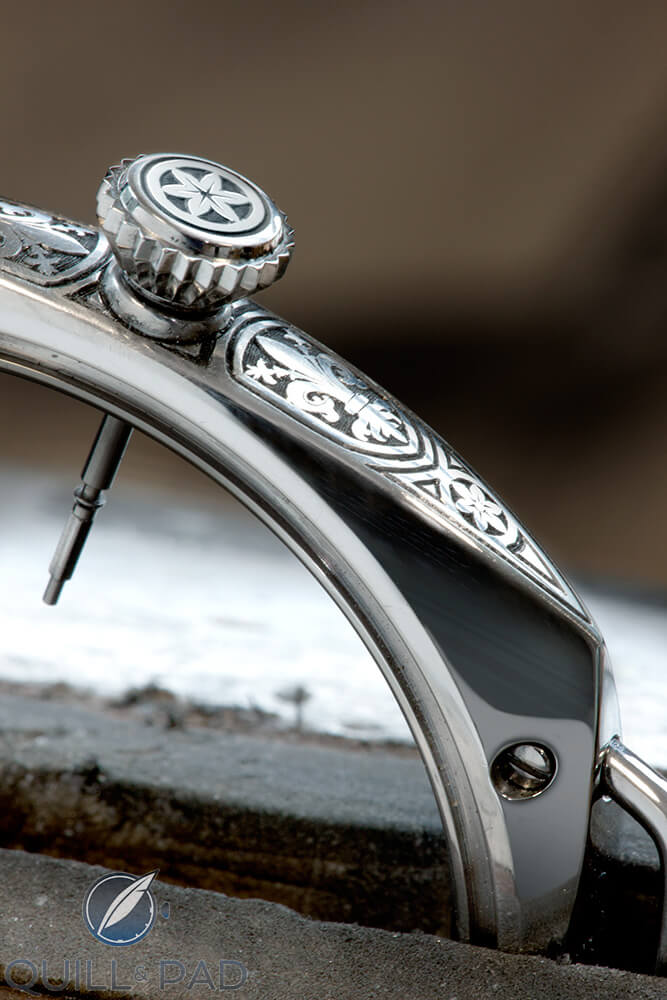 Engraving of the Panerai Radiomir Firenze 3 Days Acciaio in progress

In a ploy to follow Michelangelo’s strategy, the engraver gets rid of everything that isn’t the case as the metal “hides the design being removed.”

The designs are inspired by Florentine motifs seen on art and architecture around the Tuscan city, which is the birthplace of Officine Panerai. These geometric figures – the fine Florentine lily and the fleur-de-lis found around the city – comprise the complete engraving on the Radiomir Firenze. Balanced with this engraving is the classic sandwich dial featuring the Bauhaus-inspired numerals and markers and the simple baton-shaped hands. The wire lugs keep the case mid-century vintage (following the original case design) and the case back is all modern. The crown, which is also engraved, is a fluted pilot style, matching the case style origins.

Having bulino engraving on the crown, instead of the normal OP logo, really rounds out the effort in a spot that could have easily been missed. The Panerai Radiomir Firenze 3 Days Acciaio on the wrist

With last year’s Radiomir 1940 Chronograph and this new Firenze, I find that what strikes me most about Panerai are the truly vintage looking pieces that have just a little more differentiation than usual for the brand. Having this piece on my wrist was an awesome opportunity and it was definitely a piece I would wear on a regular basis. A classic look mixed with modern design, it just works for me. How about you?

While you ponder that, how about we get back to the breakdown!

• Late Night Lust Appeal * 68.1 » 667.832m/s2 Just like the many gun enthusiasts drooling over Italian shotguns, the Firenze makes every night a late night!

• Added-Functionitis * N/A Seriously, who really needs added functions? Not this guy. You can skip the Gotta-HAVE-That cream for the engraved and awesome non-swelling.

• Ouch Outline * 8.97 – A Hangnail That Keeps Getting Caught On You Pants Pocket People who work with their hands a lot will know the pain of a hangnail catching on things all day. But I would have a hand full of them to get my hands on this piece!

• Mermaid Moment * One Hour It will take this much time to watch the hands slowly point around the entire dial allowing you to appreciate all of the fine engraving. Then you can book a DJ.