Carnival rides are a blast! Or, if you are a skittish little boy they can be downright terrifying. When I was a young whippersnapper, I had a tenuous relationship with the carnival and many of of the rides. Of course, I would go on the giant slide, I loved the Tilt-A-Whirl and the Scrambler, and I would even take a chance on the Octopus.

But there were a few that were definite nos, and a few that were not-in-a-million-years rides. Looking back, I grew out of some of those fears, while others I still hold on to, even more now that I work with engineers and designers on a daily basis (I know now where the potential problems are at those carnivals). Fun at the fairground

The first traumatic ride event of my young life took place on one of the small dragon roller coasters that goes up and down and around no higher than six feet (two meters) and at what can only be described as a leisurely pace. I couldn’t have been more than five or six years old. After only a few moments on the ride and two miniscule “drops,” I started bawling for my mommy and made them stop the ride.

Not my finest moment.

This event not only made me perpetually ashamed at my lack of perspective as a child, but made other rides join a list of too-scary-for-me machines. The Paratrooper ride: nope. The Zipper: definitely not. The Bullet: are you kidding me?

But no other ride received such undeserved fear as the Gravitron. The Gravitron at Dreamworld in Australia

Now, all of the other rides I have said uh-uh to have had a plausible fear factor that I learned as I grew up. The Bullet, Zipper, and Paratrooper all have had a history of accidents, with the Zipper being one of the biggest offenders. But out of all the rides I was most terrified of, none surpassed the stomach-wrenching trepidation that was caused the moment I saw the looming Gravitron. 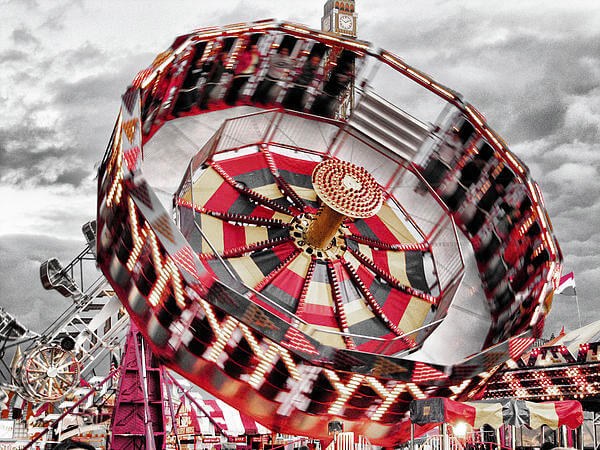 The premise of this ride is simple; the rider steps into a spaceship-esque cylinder with no seats, an operator at the center, and a padded outer wall. You lean up against the outside wall and the ride starts to spin, pushing you out against the wall. It spins you with a force of about 3 Gs, pushing you against the wall and holding you there with centrifugal force and then it slows down and stops. That’s it, really. From the inside it really isn’t scary at all, but when you are a little kid staring at a flashing spaceship spinning wildly in front of you, your insides can’t help but turn to jelly.

To this day I have never ridden the Gravitron and it remains my only ride regret. But luckily something else has now inspired me to seek out my old nemesis to conquer my fears once and for all. That something comes from a strange place (well, not that strange if you have followed my writing); the inspiration comes from a watch – the Vacheron Constantin Harmony Ultra-Thin Grande Complication Chronograph. The Ultra-Thin Grande Complication Chronograph is part of the new Harmony collection that Vacheron Constantin launched at the 2015 SIHH in Geneva. As the crown jewel of the collection, the Ultra-Thin Grande Complication Chronograph shows up with some serious style, mad mechanics, and a feature that brings back oh-so-many memories of standing in fear while friends have a blast. And that has made this a new favorite for me.

Being a new favorite is tough considering the classically amazing pieces already produced by Vacheron Constantin, but it is not surprising once you see the impeccable movement, vintage styling, and that little addition that has me reminiscing: a peripheral winding rotor.

The peripheral rotor has to be one of my favorite “standard” components for an automatic watch. Very rarely seen, they slide like magic around the movement on precision ball bearings and aid in keeping an automatic movement svelte (a full-sized rotor on the back adds thickness). They are also most necessary when aiming for the title of thinnest self-winding chronograph, the title this piece has earned.

The difficulty with a peripheral winding rotor is the lack of a moment arm to facilitate easy rotation. A traditional winding rotor pivots around a central axis with a majority of the mass as far away from that pivot as possible (tiny central bearing and big heavy weight on the end of the rotor). Winding force to the mainspring is a product of force (generated by the mass of the rotor) and the distance that the rotor is from its central axis.

This is why many high-end companies use a solid gold or even platinum rotor mass; it creates the most force because it has a high mass (mass = heavy).

But with a peripheral rotor, the rotation point is concentric AND overlapping with the rotor’s mass. With no distance from the center to gain torque (because the rotor is not on an arm), the system must be super smooth and dialed in, otherwise the force required to wind the barrel with a gear on the outside of the movement would be difficult to overcome. Just like my fear of the Gravitron.

That’s not all, folks

And like the Gravitron is to the carnival, so is the peripheral winding rotor to Caliber 3500 and the Ultra-Thin Grande Complication Chronograph. There are dozens more rides at a carnival than just the Gravitron, not to mention the arcade and the food stands. The same goes with Caliber 3500. Looking into the middle of the peripheral rotor, one might mistake Caliber 3500 for a small city with two remarkable, Vacheron Constantin-shaped skyscrapers. Those are, of course, the dual column wheels, topped with the brand’s signature Maltese cross. Taking up a majority of the rest of the real estate are the gears, springs, and levers that help make the chronograph a thing of beauty. There also happens to be the smallest teeth on a wheel I have ever seen on the center wheel, which provides for zero start-jump motion. The peripheral rotor looks like a semicircular, curved band around the lower half of the movement

The curving lines of the levers and springs make for a masterpiece of craftsmanship. This dedication is followed through on every aspect of the Ultra-Thin Grande Complication Chronograph, starting with the new case design, the perfectly symmetrical dial, period numerals, and styling following the one of the earliest wristwatch chronographs introduced in 1928.

Personally, I feel Vacheron Constantin nailed the style, and then made everyone forget what it looks like when the movement was unveiled.

The mechanics of this piece are superb; I could spend hours (and probably have) studying and dissecting the layout of the split-seconds mechanism, the peripheral rotor, and even the gentle sloping curves of the solid springs, bridges, and activator levers. I simply cannot get enough of this movement and I would place it among the top five best-looking chronograph movements of all time.

That is no hyperbole, either. I really do love the look of this movement. The vintage styling and that peripheral rotor ignite my memories as well, reminding me that I have some unfinished business at the carnival. I wonder when the next one is in town?

Until I find a Gravitron, here’s the breakdown!

• Wowza Factor * 9.1 The only thing keeping this thing from being a ten is that it is meant to be subdued. A good, classic-looking piece that won’t scream WATCH! can’t be having a huge wow otherwise it would defeat the purpose. But that movement, though! That thing keeps the wowza high!

• M.G.R. * 71.2 Barely edged out by last week’s Jaeger-LeCoultre Duomètre Sphérotourbillon Moon, this movement still holds as one of the top five chronograph movements ever made.

• Added-Functionitis * Serious A split-seconds chronograph with a power reserve is something that means business. That means you may need a whopping handful of prescription strength Gotta-HAVE-That cream for this stupendous swelling.

• Ouch Outline * 11.9 – Having A Family Of Fire Ants In The Leg Of Your Pants! All you need to do to enjoy this one is do some work on your backyard and not pay attention to where you step. Ouch. And yet, I might just walk willy nilly all over an ant mount if I knew I’d have this watch afterwards!

• Mermaid Moment * That rotor reminds me of…the Gravitron! The moment you flip over that watch, see the movement, and remember the fear of standing alone at a carnival is the moment you know this watch is meant to be by your side forever. You know, because it gets you.

• Awesome Total * 719 Add the number of components in the movement (459) to the year of the anniversary of Vacheron Constantin (260) and this total becomes an incredible total!