Baselworld Vs. Art Basel: A Look Between The 2015 Fairs

I have been involved in the watch world for 26 years; my first visit to Baselworld (which was called the Basel Fair for some of that time) was in 1991.

Designed by Swiss architects Herzog & de Meuron, the main change (from the outside at least) occurred in and around Hall 1, where another floor was added to form an overpass over and across the Messeplatz to connect it to what was formerly Hall 3 (but is now known as Hall 1 “south”) across the street. The street as such disappeared to become what the fair calls the City Lounge. Trams, but not traffic, still pass through the City Lounge, which was covered by a large roof with an opening in the center to allow for light that visitors have come to commonly call the Bird’s Nest. Coincidentally (or not), Herzog & de Meuron was also responsible for the Beijing Olympic stadium, which has also come to be known as the Bird’s Nest.

While Baselworld boasts a total of 140,600 square meters of exhibition space across six halls plus The Palace, Art Basel – which was established in 1970 by Basel art gallerists Ernst Beyeler, Trudi Bruckner, and Balz Hilt – needs only about 25,000 square meters and two exhibition halls (1 and 2). Messeplatz: the central square at Baselworld is much busier than during Art Basel

Art Basel comprises 284 galleries from 33 countries exhibiting the work of more than 4,000 artists. Baselworld is much larger with 1,500 exhibitors from just about everywhere.

In no way was I prepared for how the complex looks when Art Basel is on compared to how I know it during the hustle and bustle of Baselworld.

Perhaps this is why the pace, comparatively speaking, seemed absolutely languid. Rather than rushing to fit ten appointments in a day, the visitors to Art Basel seem to be browsing, shopping, and looking. They didn’t seem to be trying to get massive amounts of business meetings accomplished; in many cases they were either gawking at the art or contemplating buying it.

Or simply chatting. Or so it seemed to me. Entrance to Hall 1 at Baselworld

Audemars Piguet has been a global “associate partner” to Art Basel since 2014. This means that it supports all three of the organization’s fairs (Miami, Basel, and Hong Kong).

As such, it merits a booth in the collector’s lounge of all three fairs alongside the other sponsors’ booths. The concept of this year’s booth, entitled “Mineral Lab,” is to bring the Vallée de Joux to the fair. French designer Mathieu Lehanneur shaped a great part of the artistic visuals of the Audemars Piguet booth. Making the trip to Le Brassus, Lehanneur remained for an extended period to better understand both the traditional brand and its remote Vallée de Joux surroundings. 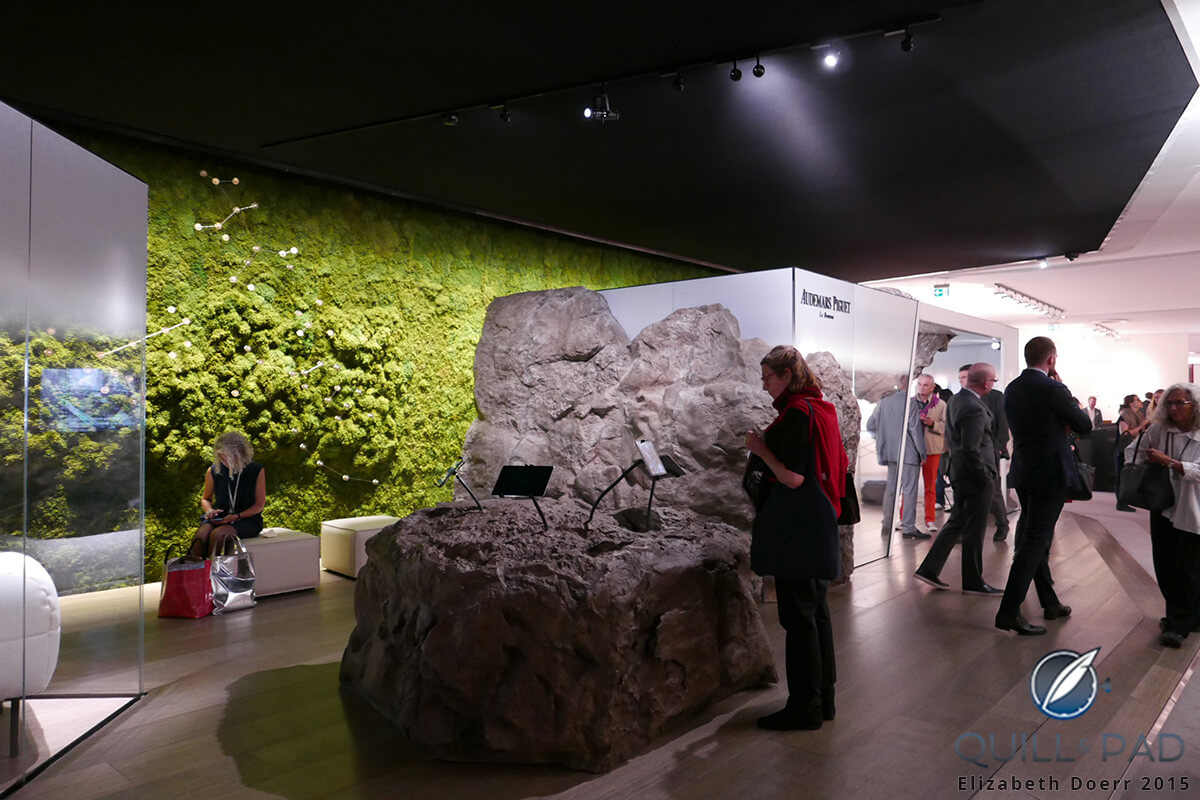 Lehanneur settled on the rocks of the thousand-meter-high valley as his focal point. He finds the Joux rocks of utmost importance in understanding the origins of Audemars Piguet’s horological art – much like board member Olivier Audemars, who said, “We asked Mathieu Lehanneur to come and spend some time in the Vallée de Joux, to walk and to try to express what for him was the quintessence of Le Brassus. This idea of the rocks came, so, basically, he used the same technique that paleontologists use to get prints . . . ”

To express the idea, instead of exporting a few of the large rocks – boulders, actually – from the Vallée de Joux to Basel or Miami Beach, Lehanneur took silicon molds of actual boulders he found in the remote Swiss valley and recreated them in his Paris studio using crushed stone powder mixed with resin. This process also allowed the rocks to be hollow and have more practical uses, like as a display background for iPads. No matter how real they look, they are definitely very light, especially compared to actual boulders!

“This retains the DNA of the rocks,” says Lehanneur. “Le Brassus is a tiny place on earth set in the midst of strong and violent nature. I tried to show the contrast, the balance between the sophistication of the items Audemars Piguet creates and the violence of the nature it is surrounded by.”

Lehanneur’s boulders were joined by the work of French artist Alexandre Joly, who in typical manner combined visual elements with sound. In this case an eco-living wall of moss (which from now on will also grace Audemars Piguet’s new boutiques) combined with a typical sound mix: Joly mixes sounds recorded in natural settings (these can include weather, landscapes, insects, and frogs) and blends them with electronic sounds and frequencies to enforce sound as a material and separate entity while referencing the visual scene it accompanies.

Joly created a bespoke Audemars Piguet sound by recording the natural sounds from around Le Brassus as well as from the factory and museum. He then fused the natural and industrial sounds, which were continuously played and disseminated across the wall. The sounds of repeating chimes struck me most.

For more on these two artists and the Art Basel booth, please see www.audemarspiguet.com/en/news/2015/03/10/audemars-piguet-to-unveil-an-updated-version-of-their-lounge-at-art-basel-s-2015-show-in-hong-kong .

Walking across the main square between halls 1 and 2 (usually teeming with people hurrying to their next appointments during Baselworld), I noticed the absence of the little huts located there during the world’s largest watch fair. These huts are usually home to little restaurants and media stands as well as the VIP welcoming area. Art Basel does not have the huts. VIPs are called “collectors” and they get special lounge treatment from the participating sponsoring brands like Ruinart and Audemars Piguet. The collector’s lounges are located in what would be hall 2.2 during Baselworld.

So, naturally, walking across Messeplatz – which seemed so spacious without the huts – I became quite intrigued by the smell of cooking food and an unstressed crowd of interestingly dressed people under what appeared to be a structural bamboo-and-steel roof located there. What I found amazed me: it was an installation called “Do We Dream under the Same Sky.”

Created by conceptual artist Rirkrit Tiravanija, German architects Nikolaus Hirsch and Michel Müller, and Finnish chef Antto Melasniemi, the installation invited visitors to enter a sphere of recovery and community: they were invited to partake of the food and drink being created open air, which included herbal tea picked fresh from the onsite garden, food rooted in Thai tradition, and even homemade ice cream served on large spoons. The only return asked was to wash one’s own dishes. The installation was run with the help of students from Städelschule in Frankfurt and the FHNW Academy of Art and Design in Basel, who worked alongside Tiravanija and Melasniemi running the solar-powered kitchen, preparing food, and organizing additional events. Both schools have a tradition of students running experimental kitchens and testing concepts of hospitality.

“Do We Dream under the Same Sky” was commissioned by Art Basel. You can support creating a new infrastructure for this community on Kickstarter.

The most expensive art piece

At Baselworld, I would not dare to talk about “the most expensive” watch I’d seen because I understand that in many cases the price of a luxury timepiece is secondary to its appreciation – particularly when we’re talking about mechanical horology as art.

Despite this (and here is another difference between Baselworld and Art Basel), I am going to point out to you the most expensive piece of art I saw and recognized because this is something you just have to see to believe.

In the “galleries” section of hall 2.1, it was not very hard to find the Gagosian gallery (thanks to the teeming crowds in front of it), which offered works by Georg Baselitz, John Currin, Richard Pricne, and Richard Serra. “Cat on a Clothesline” by Jeff Koons: cute, but is it $10 million worth of cuteness?

And works by Jeff Koons.

And here, larger than life, we find a plastic-looking kitten in an orange sock wedged between two daisies looking like they just came off a birthday cake. I was told this was a Koons work called “Cat on a Clothesline” from 1994 and it was worth something in the neighborhood of $10 million.