You are here: Home1 / Articles2 / Watch Brands & Horology3 / Audemars Piguet4 / The 2002 Audemars Piguet Royal Oak Concept Watch Is One Of The First “Superwatches.”...

The 2002 Audemars Piguet Royal Oak Concept Watch Is One Of The First “Superwatches.” Plus Return Of Its Designer, Claude Emmenegger

When Audemars Piguet celebrated the thirtieth anniversary of its Royal Oak in 2002, it did so by presenting its first concept watch, which could well be termed one of the first “superwatches” appearing in the watch world.

The Royal Oak Concept Watch is a lighter timepiece than it looks despite the intrinsic complexity of its manually wound Caliber 2896. This is in great part thanks to the lightness of the case, which is made of a “super” alloy called Alacrite 602 and topped off with a titanium bezel. Alcarite consists of 57 percent cobalt, 31 percent chrome, 5 percent tungsten, and trace amounts of carbon, silicon, and iron. The Royal Oak Concept Watch is significant in the history of horology as it represented a real departure for a very traditional brand, propelling it into a relatively uncertain future. It also embodied the beginning of a limited line of concept watches housed in the beefed-up Royal Oak case.

While today we may be very familiar with futuristic-looking movements and watches – thanks also in part to the work of Richard Mille, whose brand also works with Audemars Piguet Renaud et Papi, the creators of the Concept Watch movement – it is important to keep in mind that for a traditional brand like Audemars Piguet to come out with a wild watch like this was far more than just novel. It was downright audacious. There is no dial concealing the work that went into the Concept Watch. Visible on the left side is the tourbillon enveloped in a cage outfitted with distinctive squiggly shock absorbers (making it shock-resistant to 50 Gs). There is also a dynamographe at the 12 o’clock position, which instantaneously displays mainspring torque: it was this very watch that introduced the dynamographe to the watch world. 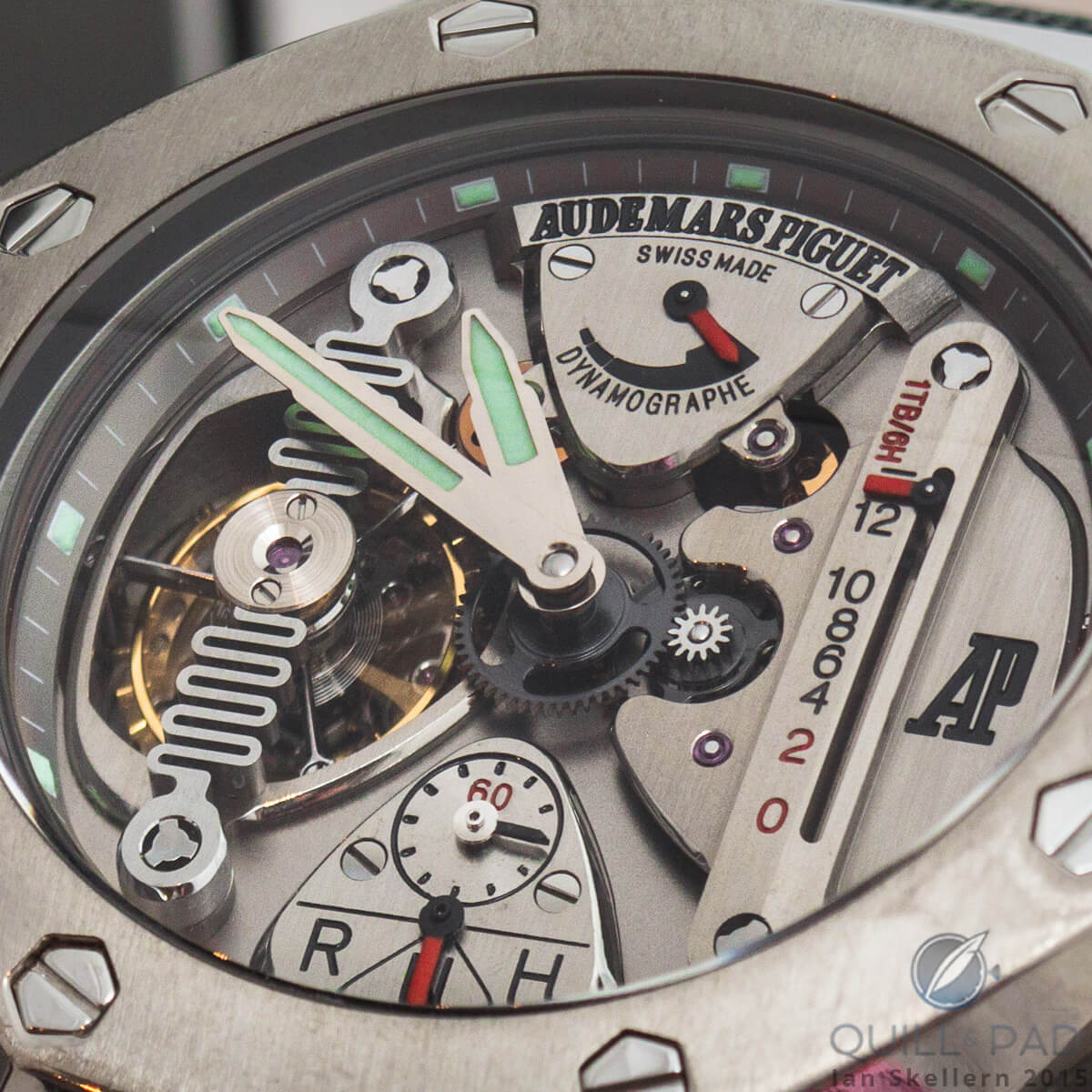 A crown function system with a pusher to control the mode is also indicated on the front of the watch at the 6 o’clock position. These functions are indicated with letters for the French words, but correspond to neutral (N), winding (R), and time-setting (H).

A linear power reserve indicator down the right side of the face shows the current amount of power reserve, calibrated by the number of barrel turns (approximately six hours of operation per barrel turn). This beefed-up Royal Oak instantly resonated with collectors looking for something beyond the norm. And at the time, this Concept Watch was seriously beyond the norm. It was also polarizing: I recall many collectors who were less than enamored of the departure at the time. I wonder if they feel much differently about it now. Claude Emmenegger, who was head of artistic design at Audemars Piguet during the development of the first Concept Watch, has returned to the brand as artistic director in 2015

The high-tech look and feel of the Concept Watch was achieved by use of an integrated design managed by Claude Emmenegger, who worked on it from 1999 through 2002 in collaboration with Giulio Papi.

At the time, Emmenegger was the head of artistic direction at Audemars Piguet. Octavio García filled this position from the time of Emmenegger’s departure until January 2015.

“The Audemars Piguet Royal Oak Concept Watch was originally designed as a one-off,” Emmenegger recently told us during a visit to Le Brassus. “It turned into a series.”

Emmenegger has now returned to Audemars Piguet following García’s departure, making this an excellent time to cast another look at this stunning piece of horology, which was one of the catalysts propelling haute horlogerie into this new age of funkadelic, futuristic mechanical watchmaking.