Boldness is relative: what one might call extremely brazen another may view as normal – even boring.

In every culture around the world, social norms dictate how people act, what they say, and what styles are acceptable. Each society has a shared understanding of identity standards. But nearly no society shares the exact same standards with another.

Time, place, historical events, access to media, information, and more shapes what a society considers normal and what it considers extreme. Design is no exception: conservative versus avant-garde and safe versus bold; every level of art, consumer product, or civil construction is subject to scrutiny, and where it lands depends wholly on when and where it is.

Think of the futuristic appliances of the 1950s and ’60s: a magic oven that could cook anything in just minutes or seconds, an automatic coffee brewing machine that had a cup ready for you when you woke up – the gadgets that made the biggest splashes are now ubiquitous and even yawn-inducing.

Well, except an automatic coffee maker, that is specifically built to do the opposite.

Today, the boldest ideas include smart refrigerators that suggest recipes based on what is on its shelves, and, tied to a super-useful app, it can even make a shopping list and order groceries.

But 20 years from now, when every well-appointed kitchen not only has a microwave and an automatic coffee maker but also AI-powered cutting boards that make sure you are chopping all of your daily recommended servings of vegetables, we won’t be wowed by that tech; instead, what is considered bold will be much more advanced.

It will take something along the lines of a machine that shrinks your three-course meal down to three easily swallowable pills for the “on-the-go” family to really make us stop and take interest. Boldness will always be relative.

There are many examples of this in the watch industry, and one of the clearest and most traceable examples comes from the history of the Audemars Piguet Royal Oak and its 45 years’ worth of offspring following its release in 1972.

Audemars Piguet has chosen to honor this occasion with a physical manifestation of my phrase boldness is relative with two new models: one a nearly identical re-edition of the original Royal Oak Offshore and the other a bold departure from what has come before, truly showing evolution in standards. The first Royal Oak designed by Gérald Genta in 1972 shocked the luxury watch world with its design, its price, and its case material. It also effectively established a new standard for a bold, steel, luxury sports watch: largely different from anything else at the time, it created a market for later watches of this genre, some even also designed by Genta such as the Patek Philippe Nautilus.

In the early 1970s watch industry, most of what was manufactured by established brands was small, delicate, and made from precious metals. Big, heavy, and steel was limited to lower-end diver’s watches or chronographs generally far from the luxury price range.

So when Audemars Piguet released a large (for the time), steel, luxury sports watch, the industry noticed. It was a bold move at an interesting time with a bold design to go with it. The octagonal bezel with hexagonal screw heads was a rather strong design cue and combined with the thick angular case and integrated steel bracelet, the Royal Oak broke new ground as a true luxury sports watch. Of course it became popular, as groundbreaking designs often do, and it became one of the greatest sports watches of the twentieth century.

That is why, 20 years later for the anniversary in 1993, Audemars Piguet tapped a young designer by the name of Emmanuel Gueit to design a new line for the Royal Oak with the purpose of making a bold move forward like with the original release. And the new Royal Oak Offshore was certainly bold, so much so that many, including Genta himself, decried the new direction and said it destroyed the original design. Like with many bold decisions, it also became wildly popular – and has been one of the most popular Audemars Piguet models of all time.

The proportions were increased, the details oversized, and a massive rubber gasket added between the bezel and the case to make it a sturdy presence on the wrist. And the new model actually made the original look tame and reserved, the once-bold design relegated to the “safe” column when it came to luxury sports watches.

Different times and different tastes made for a new standard of bold. And then time marched on.

The Royal Oak Offshore’s bold past

Now the year is 2018 and it has been a quarter century since the launch of the Royal Oak Offshore, and of course the anniversary is being recognized. But what has arrived isn’t like the last anniversary, where a new line shocked watch lovers and dazzled and dismayed longtime Royal Oak fans.

No, what Audemars Piguet showed up with was a nod to the past in more ways than one.

First, AP has released a re-edition of the original Royal Oak Offshore, identical down to nearly every detail with only a couple minor updates. This is basically the same watch that shocked and wowed the industry when it was launched in 1993, only now it looks subdued and refined compared to other watches we see nowadays (including many from Audemars Piguet’s own ranks like the Royal Oak Concept Watch of 2002). Really, the re-edition is everything that hardcore vintage fans should love, a quasi-NOS watch that comes with a warranty and a more modern base movement. But what truly makes it special is that the other new Offshore model(s) the brand released are a nod to the boldness of the original set in modern context and sensibilities.

We as fans and consumers are so used to radical, large, mechanical masterpieces that simply pumping up a few features no longer a bold watch makes. So instead, another new celebratory model takes a serious departure from the original shapes and details, also providing an extreme presentation of the movement: the Audemars Piguet Royal Oak Offshore Tourbillon Chronograph makes for a rather bold shift from the usual style.

The movement, which has been skeletonized in a very industrial manner, is held in the case by the famous hexagonal bezel screws, which no longer only hold the bezel in place. In fact, the screws’ new job is to also lock the movement down at the eight points of the bezel, securing eight bridges that hold the double barrels, the tourbillon, and chronograph minutes subdial; these screws hold the entire movement together. Even more interesting is that the hexagonal screws are underneath the sapphire crystal acting as stylized anchors for a pocketed underbezel. In fact, the effective bezel is rather minimized outside of the crystal, allowing it to match the signature octagonal shape, a definite first in Royal Oak history. 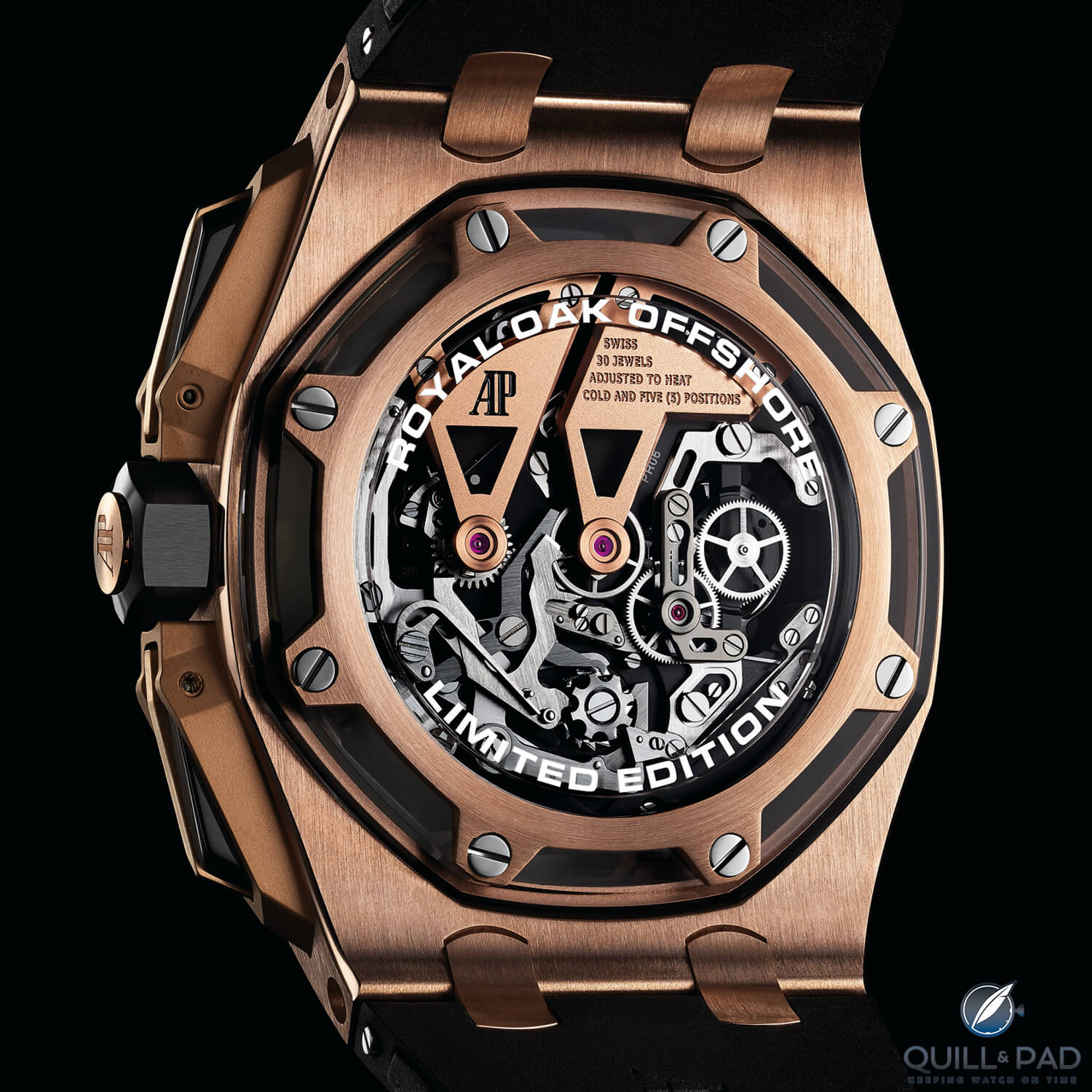 The case makes up for the apparent “lightening,” though, with a larger profile in multiple directions, steeper bevels, and more aggressive angles. This is matched with the more aggressive chronograph pushers and a new case back that emphasizes the chronograph mechanism on the rear of the movement. The styling of the details is about as far as you can go from the original while still making it instantly recognizable as a Royal Oak. The design treads a fine line between extreme and detailed, and like the original Royal Oak and Royal Oak Offshore, it is polarizing. This new wild model will be a limited run however, 50 pieces in steel and 50 in pink gold.

So while the Offshore is rather wild, it does not seem destined to be part of the permanent collection yet; that remains to be seen based on demand and what Audemars Piguet has in store for us. The re-edition of the original is a non-limited run, so it very well might find a home in the regular collection, maintaining a bit of the old-but-bold Royal Oak Offshore that launched in 1993.

The two different versions have already played their part, though, showing exactly how bold is a relative term and giving us a glimpse into a past that doesn’t feel that long ago, yet standards-wise is clearly a distant memory. Looking at the re-edition it is clear that the industry is so saturated with bold at this point that it takes more than big sizes and strong angles to be considered groundbreaking or category-shifting.

Genta created both an icon and a whole new category of luxury timepiece, and 20 years later Gueit took up his pencil to create a new chapter to redefine bold steel luxury sports watches. After reigning for 25 years atop the Audemars Piguet catalog, a new kid has appeared on the block, joined by his ancestor incarnate, to demonstrate the simple idea that bold is relative. I’m sure like its predecessors it will be both lauded and criticized for its boldness.

And one thing remains certain: Audemars Piguet certainly knows how to read the times and push just far enough to touch the current boundaries of acceptable design standards to ask the question, “What comes next?”

While I ponder that question, how about the breakdown!