What it’s like to be a queen? That’s a feeling almost no one will ever understand. No matter what governments do, or where monarchies linger, no more than a few dozen women will ever really know what it is like to be called “your majesty.”

At least in a serious and honest tone. We have slowly left the world where kings and queens ruled from golden thrones, and peasants wait to hear their royal commands.

One might say this was inevitable, as more and more people became educated, countries merged for political reasons, and elected governing bodies replaced unelected royalty. There are still a few countries that maintain the royal tradition, though even there a majority of the power is held by elected officials, not hereditary lottery winners.

If we are honest with ourselves, though, who would really want to be a queen (or king)? All that it would mean is an intense, lifelong pressure to be a certain person, regardless of who you really are, and with largely zero amount of freedom and privacy. 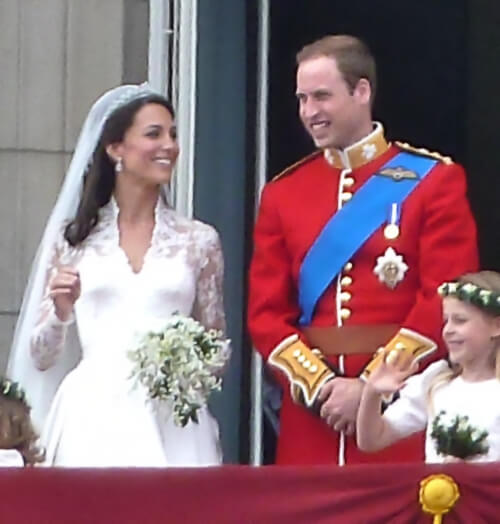 Will and Kate, Prince and Princess, Duke and Duchess

Some might say royalty observe the highest amount of freedom possible, but anyone keeping an eye on how the life of Catherine, Duchess of Cambridge has changed dramatically since she relinquished being the commoner Kate Middleton, will understand the stark truth of royal life. It means always being “on” for those around you.

Thanks, but no thanks.

The difference a couple centuries make – or not

Which is basically what Abraham-Louis Breguet did for Caroline Murat, Queen of Naples.

Caroline Bonaparte (the Murat name came from her husband Joachim Murat, King of Naples) was one of Breguet’s best clients, purchasing 34 clocks and watches over a span of nine years.

She also happened to order the very first watch designed to be worn on the wrist as far as we are aware. For more on that story, read The First Wristwatches From Breguet, Hermès and Patek Philippe Were Made . . . For Women. One-hundred and ninety years later that watch inspired the Breguet Reine de Naples collection, which launched in 2002 following the historic description of an “oblong (repeater) for bracelet” to create the now-iconic feminine shape. Here we are, another thirteen years into the future, and Breguet has released a Haute Joaillerie version of the Reine de Naples, stepping up the setting game and resulting in an exquisite royally bedazzled presence.

First, I must admit that the Reine de Naples is a bit of a curiosity for me, as I love the shape even though it definitely looks at home on a female wrist. It might simply be that the oval shape is still a rare sight, especially in the portrait orientation.

While I have said I would wear a women’s watch before (see The Hermès Arceau Temari: Stones Here And Stones There), I only adore this one as a spectator seeing as how my wrists are still rather manly. Oh, well. The Reine de Naples is a serious horological collection; aside from the feminine lines, multiple jeweled pieces, and intricate engravings, the line features moon phase indications, hour chime complications, power reserve indicators, and the most poetic of them all: the day/night indication with 24-hour rotating moon and balance wheel assembly.

So if a lady preferred something a bit more technically impressive over the aesthetically beautiful, she would have some fantastic options. A close look at the dial of the Breguet Reine de Naples Haute Joaillerie: note the exquisite detail engraved into the moon

The Haute Joaillerie model is one of those options that has you covered in both respects. The movement of this piece features a classic moon phase operating at the top of the dial. Tucked right beneath that is the power reserve scale, engraved delicately into the mother-of-pearl dial while the indicator arm sweeps gracefully across the opening of the moon phase as the mainspring runs down. This allows the discerning FWIS to appreciate the mechanics of her Breguet should the diamonds ever lose her interest.

Who am I kidding, they could never lose her interest! Including the bracelet, case, dial, and crown, the Reine de Naples Haute Joaillerie watch features 965 stones in four different cuts. Based on the model variant chosen, the stones can vary between pink, purple, and blue sapphires on the bracelet, in the crown, and on one model, around the entire bezel. Square and rectangular baguette-cut diamonds, sapphire cabochons, and a huge number of brilliant-cut diamonds create a tapestry of color and sparkle that the gem setter can play with.

Oh, and it is a feast for your eyes as well.

What stands out? Everything

The intricate and interesting bracelet is where the watch really takes on its true feminine charm. Many of the Reine de Naples pieces feature standard straps (very beautiful, of course) and do their part in keeping the watches, well, toned down. But there are some very interesting bracelet designs with mesh links or dangling chain strands, and this Haute Joaillerie bracelet on the Reine de Naples is second to none. The bracelet begins with ten gold oval (of course) ring links set with 650 diamonds. These links attach to eleven solid oval links, which perfectly mirror the shape of the case. The links are set with 151 baguette-cut diamonds around a center-mounted sapphire cabochon, eleven in all.

The openness and settings of the bracelet belie the strength of such a configuration, and one definitely would not need to worry about this piece slipping off once clasped.

The settings continue onto the case, as previously mentioned, with more baguette-cut diamonds (and in one case, colored sapphires) around the entire bezel and the side of the case. Just inside the case around the edge is a fine line of diamonds encircling the mother-of-pearl dial, which changes the mood to the smaller stones inside.

The time-telling portion of the dial, besides being hand-guilloche in typical Breguet manner, is also set with 67 brilliant-cut diamonds completing the dazzling picture of elegance and high-strength carbon accessorizing. Because diamonds are made of carbon, ya dig?

There is one last spot for a setting, and that is the crown. Located a little lower than usual (at five o’clock rather than 3 o’clock), the crown is set with a rather large and luminous oval-shaped diamond, which carries the shapes found throughout the piece into your tactile connection with the watch. The crown perfectly rounds out the display of haute joaillerie in the Reine de Naples Haute Joaillerie.

The name really seems appropriate, doesn’t it? Especially once you consider that the other two highly jeweled pieces in the collection, the Reference 8973 grand complication and the Reference 8939 full baguette-set, both have about half as many jewels as the Haute Joaillerie at 965, with 592 for the grand complication and 439 for the full baguette.

That’s why the only way I can categorize something like this is to create a new rating system (again?) to cover things so utterly beautiful and difficult to capture in words. This new rating will be called the Adorable Puppy Index, or API for short. Puppies are a great way to understand how much something makes you melt and smile at the same time without any logical explanation. Since ten adorable puppies are considered a fatal dose of cuteness to the average human (myself included), the scale will top out at eleven. The reason for this is because every scale usually goes from one to ten, but ours goes up to eleven.

So the Breguet Reine de Naples Haute Joaillerie, with all of its amazing jewels, complications, history, and femininity will, after careful deliberation, receive an API score of 7.5! That means to get the equivalent feeling that you get from this watch, you would need to play with at least 7 puppies, and 8 would simply be better. Oh, puppies!