The GPHG defines the Tourbillon category as comprising watches containing at least one tourbillon. Additional indications and complications are admissible. JM: The 2015 GPHG tourbillon category is a very tough one to call. Like a previous category, I am pulled between pure love and serious horological progress. Here is a list of my three top picks.

GG: What a tough category! If you’d told me a year ago that I’d be putting a new Greubel Forsey watch third in the tourbillon class I’d have been incredulous; but such was the strength of this year’s field.

IS: This is perhaps the strongest lineup of potential winners I’ve seen in the categories to date. I would be very happy to wear any of the pre-selected watches, and they are all absolutely excellent in different ways. With much regret I can select my top four, but reducing that to three is like pulling teeth. IS: Horological Machine No. 6 is my tied-for-first-place choice because it’s the kind of watch only MB&F can pull off successfully, meaning as technically as serious as anything out there but with a sense of fun generally lacking in the oft sober world of watches.

GG: I was sorely tempted to give the nod to the Preziuso for its sheer audacity, technical pyrotechnics, and the creator’s statement in the GPHG notes that he has “no business plan or even marketing strategy.” At the end of the day, though, I was won over by the coherence of the Space Pirate and the fact that I’ve had one on my wrist and could barely stand to take it off. Well done, Max and Friends!

JM: My first runner-up is chosen out of love and the pure design beauty that MB&F always incites in me. The HM6 is a fantastical spaceship, a wrist creation that not only looks insanely awesome, but is remarkably comfortable. Not to mention it is so entirely fun to look at, and the movement inside is a work of art in itself. It was hard not to choose this as the winner; because it is the one I want on my wrist the most out of any of the selected watches. MB&F Horological Machine No. 6 (HM6) on the wrist

IS: The first time I saw and held the MB&F HM6 it was love at first sight. The unusual organic nature of the case is surprisingly comfortable to wear, and there is visual interest in every corner. However, it’s the top where the magic happens and where MB&F’s playful nature really expresses itself: a flying tourbillon with a retractable titanium shield that looks as though it winks as the shield opens and closes at the push of a button.

For more information, please read The 2015 Red Dot Has A New Watch Category. And The Winners Are . . . IS: Antoine Preziouso’s Tourbillon of Tourbillon gets an honorable mention from me because of the sheer technical brilliance of developing a differential that can handle three inputs (tourbillons).

Mentally, I can get my head around how an even number of tourbillions might work with a differential, but three just blows my mind. The only reason that the Tourbillon of Tourbillons didn’t make my top three is that at 45 mm it’s just too big for my little wrists, and some of the jury may feel the same.

GG: My second-place runner-up is the Antoine Preziuso Tourbillon of Tourbillons.

JM: The second runner-up has ended with a tie for me as I can’t decide between the Antoine Preziuso Tourbillon of Tourbillons or the Greubel Forsey Tourbillon 24 Secondes Vision. Both demonstrate remarkable skill in creating a tourbillon (or set of tourbillons) that go above and beyond the average example. Antoine Preziuso Tourbillon of Tourbillons on the wrist

JM: The Greubel Forsey Tourbillon 24 Secondes Vision takes the brand’s winning inclined tourbillon and makes its most classically designed watch yet. Antoine Preziuso creates a whirlwind within whirlwinds centered around an awesome differential, making this example a stout contender. 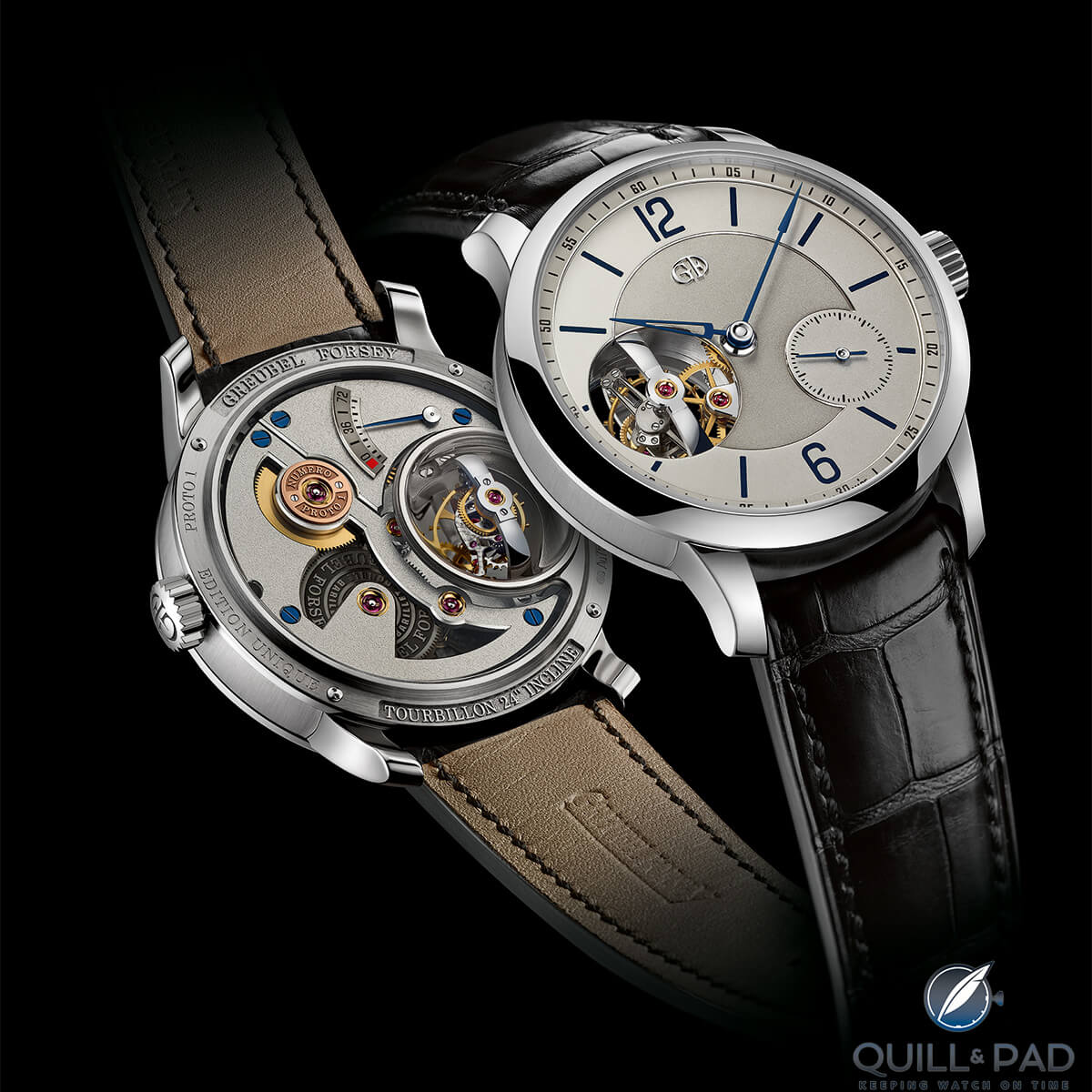 IS: With such sublimely designed, hand-finished movements, many may prefer Greubel Forsey’s more open-architecture models (and the Double Tourbillon Technique is one of my favorite watches of all time).

However, I’m attracted to the Tourbillon 24 Secondes Vision because it is just so unassuming at first glance, with just that opening in the dial revealing that there is more to this watch than an absolutely perfectly executed dial. While it’s the polished tourbillon bridge that is likely − with good reason − to catch the eye, the shape of the blued steel hands and fired-enamel indexes provide a harmony not often seen. IS: And turning the Tourbillon 24 Secondes Vision over reveals another surprise in the dome over the tourbillon enabling a much slimmer watch than the inclined tourbillon would normally allow. And that lower tourbillon bridge is a work of art in itself!

For more, please read Give Me Five! Tourbillons From SIHH 2015 and SIHH 2015 Photo Essay: Greubel Forsey. JM: My pick for winner of the category has to go to a watch that is seemingly innocuous and could be called a sleeper.

Along with the Greubel Forsey, the Ulysse Nardin Ulysse Anchor Tourbillon is a clean and simple-looking watch. But the function of the flying anchor escapement invention presents a shift in thinking about escapements – and manufacturing in general.

The undisputed king of silicon watchmaking, Ulysse Nardin made a tourbillon with a flying escapement (meaning it is not attached to a pivot like most escapements) etched from pure silicon, creating a lubricant-free escapement that also reduces complexity and increases precision. It humbly stands as the most impressive example of a tourbillon among these, and looking at the other examples, that is saying something. The Ulysse Nardin Anchor Tourbillon on the wrist

For much more information, please read The Ulysse Anchor Tourbillon By Ulysse Nardin.