You are here: Home1 / General2 / Highlights3 / Dubai Watch Week: The Good, The Bad, And The Ugly

Dubai Watch Week: The Good, The Bad, And The Ugly

The inaugural Dubai Watch Week (DWW) has just closed its doors. And what a week it has been: sunny days filled with (beginner) watchmaking classes, informative and often entertaining discussion panels, conversations with CEOs and watchmakers, and a multitude of watch collectors and aficionados enjoying all the event had to offer. Listening to a discussion panel at Dubai Watch Week, I happened to notice the A. Lange & Söhne Datograph and the F.P. Journe on the wrists of my neighbors (this caliber of watches was not unusual for many visitors to the exhibition I encountered)

But before we take a look at what was good about DWW, let’s get the “bad” and the “ugly” out of the way first.

In one word, the biggest drawback was the heat. Or to be more precise, the very humid heat.

And in case anyone is (understandably) thinking, “Well, of course somebody living in Switzerland is likely to find Dubai a tad on the warm side,” you should know that I spent the first decades of my life in tropical North Queensland, Australia and grew up with hot, humid summers.

But, wow! Just as it does with so much else, Dubai took heat to a completely new level! I’m not exaggerating when I say that within two minutes of leaving an air-conditioned building or car, it feels like stepping into a sauna with a broken thermostat.

On the plus side, you generally do not have to bear the humidity for very long (unless you want to) because most of the city is designed so that you can quickly step from air-conditioned buildings to cars and vice versa.

And apparently it was unusual for it to be this hot and humid in late October (so I will have to come back again to confirm that). Just a few of the many incredible skyscrapers in Dubai

Dubai is like a model skyscraper exhibition for giants, and the sheer scale and diversity of the buildings are mind blowing. Behind the glitzy buildings, Dubai looks like a giant construction site

However, it’s a city still very much under construction as it continues to boom: while the skyline in some directions is impressive in its grandeur, a turn of the head quickly reveals great big holes in the ground and lots of raw concrete.

Unfortunately, I was too busy to do much sightseeing − but will definitely schedule time for that next time (and hopefully there will be a next time). So I’ll focus here on what I thought was good (or even great) about Dubai Watch Week. First of all, while this may not suit everyone, as a big fan of independent watchmaking I loved the focus at DWW on small independent watch brands. And when I say focus I mean exclusive focus: there were zero big brands exhibiting, something unheard of for an international exhibition in my experience.

The ten brands on show at Dubai Watch Week were: Bovet, Cabestan, De Bethune, Greubel Forsey, Hautlence, Laurent Ferrier, MB&F, H. Moser & Cie, Moritz Grossmann, and Urwerk. They were grouped in an art gallery under the title Rebels of Horology. And to add a little more horological spice to the mix, the 72 watches pre-selected in the 2015 Grand Prix d’Horlogerie de Genève were also on display at DWW all week. The winners of the 2015 Grand Prix will be announced on Thursday, October 29. You will be able to follow the Grand Prix live here on Quill & Pad. Now, normally a watch fair is all about exhibiting watches. And while Dubai Watch Week ticked that box, it was the first watch fair I’ve been to that was so non-commercial that the watches actually played second fiddle. The real aim of DWW was to inform and educate, and it was the watchmaking master classes, discussion panels, and talks that were the real highlights. And not just with the public, but the participants as well. Both Elizabeth and I moderated discussion panels on a wide range of interesting topics and were impressed by the caliber of questions and knowledge of local collectors. 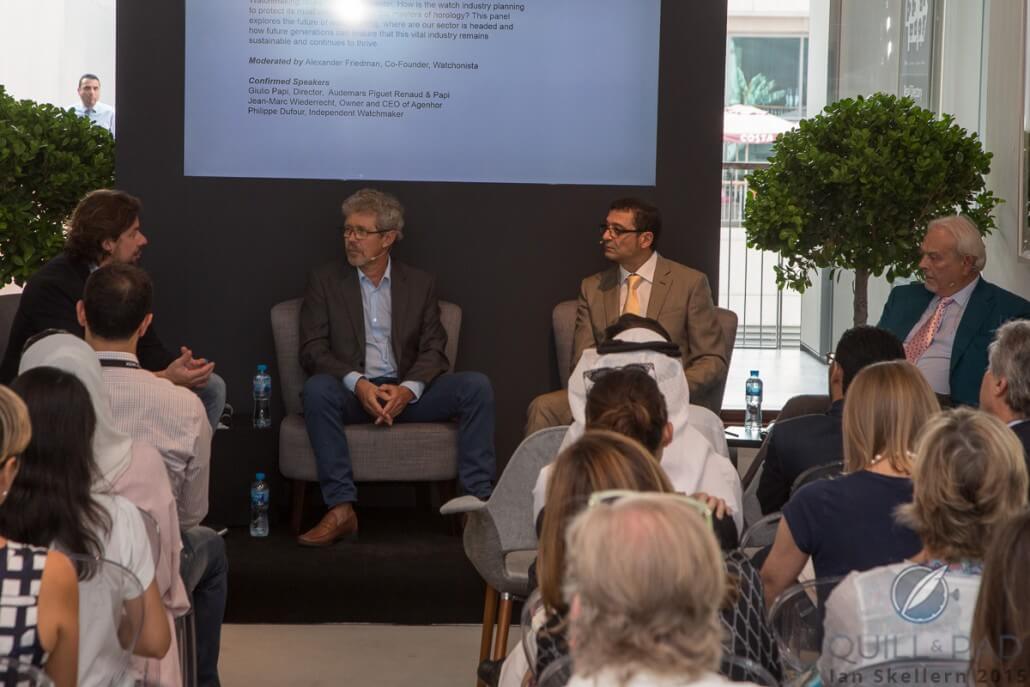 And it was a real pleasure meeting and talking to so many watch enthusiasts, because that is not always so easy at larger exhibitors due to the time constraints imposed by trying to cover a large number of brands in an editorial sense. We will be sharing more on Dubai Watch Week soon, but now I’ve got a plane to catch. And it surely will not be long before I’m complaining about the cold in Europe and dreaming of the warm sunshine in Dubai!