Roger Smith has long had an appreciation for triple calendar wristwatches, finding harmonious balance and purity in the triple calendar indications of day, date, and month.

And having successfully redeveloped his George Daniels-invented co-axial escapement to be both smaller and more efficient, the time was right to introduce a new model. But even though his mentor George Daniels passed away in 2011, Smith still has many of Daniels’ horological mantras embedded in his psyche, including “indications should always be clearly legible.” One issue with triple calendars is that the date hand, being the longest − the date is usually indicated around the periphery of the dial by a central hand − regularly covered all of the other indications.

Smith’s solution was to split his solid silver dial into two main outer and inner sections, which enables space for a small indicator with an aperture to rotate around the dial without ever covering one of the other indications. Legibility is further enhanced by the liberal use of high-contrast red gold over the silver dial for the highly sculptured hour and minute hands, second hand, frames around the apertures for the day and month, ring for the Roman hour numerals, and ring around the moon phase for the seconds. Roger Smith has been successfully regulating his movements with his own version of the George Daniels co-axial escapement for nearly ten years. And while it has evolved in that time, he decided that there were still things he might improve. The end result is a new co-axial escapement with a significantly smaller escape wheel. But the benefits of the smaller size extend far beyond enabling more space for other mechanisms. The small escape wheel is much lighter than the one it replaces, which means that with less mass it accelerates and decelerates much easier and much faster, which requires less energy. The co-axial escapement, which was invented by George Daniels

A lower energy requirement allows for a less powerful mainspring, which translates to less force on components; so less friction, less stress, and less wear. 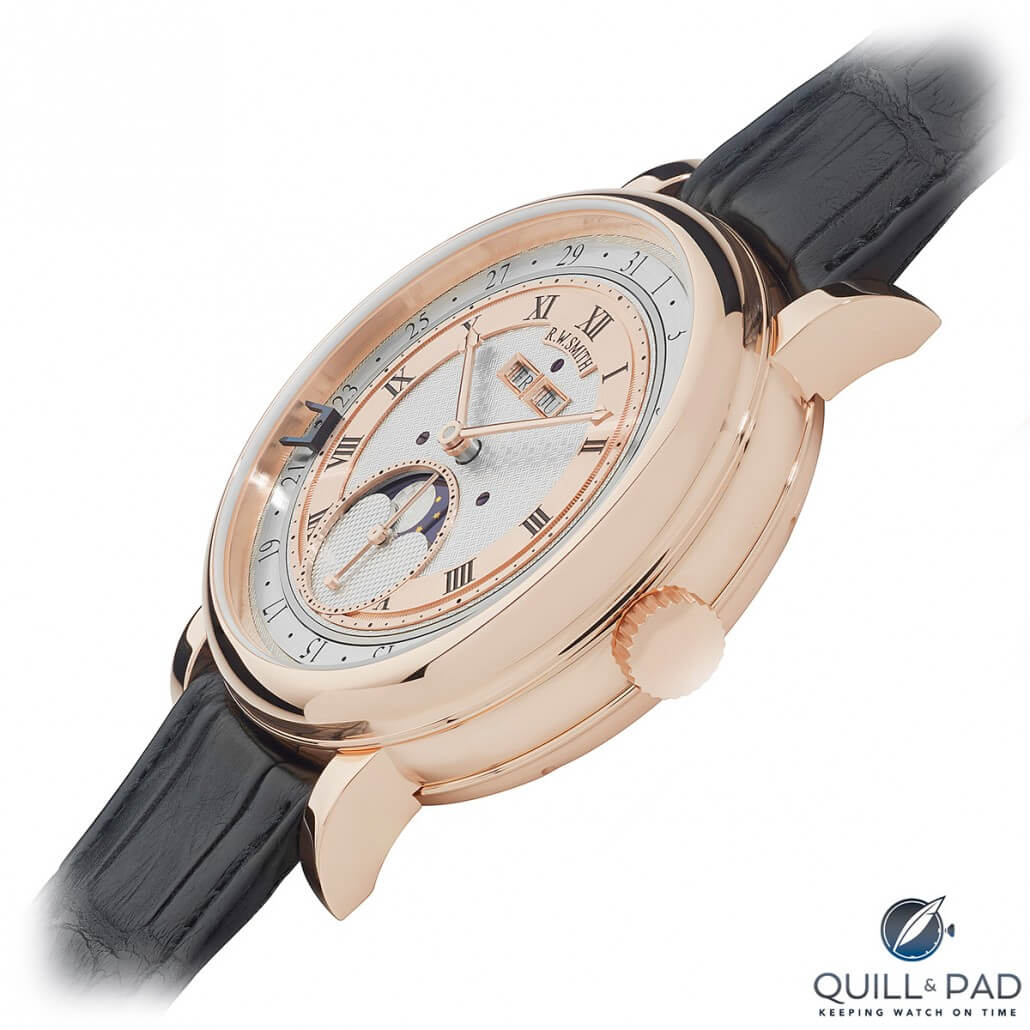 While the co-axial escapement is a very demanding escapement to make and assemble due to the fact that there is absolutely no room for error with incredibly tight tolerances it requires, it is technically far superior to the industry standard Swiss lever escapement in many respects. Because it requires little lubrication, Smith’s co-axial can comfortably and safely work for at least seven years before requiring a service.

And while slowly deteriorating oil reduces the precision of the vast majority of movements over the years, Smith’s co-axial escapements offer high performance for much longer. But as impressive as Roger Smith’s watches are both aesthetically and technically, those features are not what make his timepieces so special. It isn’t so much the specifics of the watches Smith crafts, but how he crafts them that make his timepieces so desirable to discerning collectors. It’s the manually intensive process that is Smith’s secret sauce for making such tasty wristwatches. It’s rare enough even for a large brand to (accurately) boast of having an in-house manufacture movement, but Smith goes further still, much further. In his workshop on the Isle of Man, located between the northwest coasts of England and Northern Ireland, Smith not only makes nearly all of the components for his movements, he also makes his own dials, hands and cases, all of which tend to be outsourced by the majority of brands, both large and small.