You are here: Home / Articles / General / Highlights / Keep Calm And Continue Collecting: Advice For An Up And Down Watch Mar...

“When one boy among a dozen throws a stone into the air, crying out, that ‘what goes up must come down,’ it is very likely so to happen.” – Theodore Sedgwick’s Hints to my Countrymen, 1826

As Mom always said, “Timeliness is a virtue!”

When I first considered an article on this topic some time ago, the title was going to be “How High is Up?” This was in reference to what, at the time, was the ongoing escalation in the prices of both new and used watches and the flood of higher-end, highly complicated timepieces from makers both large and small. A thought for turbulent times

Now, it seems fairly evident that we are on the down slope of either a cyclical correction in prices or, if one takes a less optimistic view, a permanent loss of watch value as the mechanical timepiece industry faces a variety of challenges and potential disruptions.

So what’s a collector to do? And what lessons can we draw, both from recent watch auction results and the history of other luxury categories, to guide us?

What we are seeing now

After a long period of ascendancy, the market for pre-owned pieces in the most recent cycle of auctions showed some pretty clear signs of softening. I went through the most recent Geneva, Hong Kong, and New York auctions on a lot-by-lot basis and found several patterns.

Select top pieces are still robust: At the very top of the heap, there are obviously collectors who want what they want and who will pay top dollar for very special watches in great condition. These needn’t necessarily be the usual suspects (Patek Philippe and Rolex); at Phillips’ Hong Kong auction, a vintage Cartier Crash sold for US $141,000, more than five times its high estimate.

Some other cult pieces, like the Patek Philippe Reference 5020R cushion-shaped perpetual calendar chronograph, sold well above estimate as well. But even at the high end, all is not sweetness and light. Christie’s New York catalogue cover piece, a striking Patek Philippe pocket watch, failed to sell, for instance. As did the Rolex Reference 6264 “John Player Special” Daytona in Hong Kong.

Across recent auctions, other mouth-watering pieces such as a Patek Philippe Reference 3939 tourbillon minute repeater and an Audemars Piguet Grande Complication sold at or below the midpoints of their projected ranges. And there were some stunners, including a Patek Philippe 5102G Celestial that some lucky soul took home for the (relative) bargain price of $175,000. Variants matter: As an example, three Greubel Forsey watches were offered at recent auctions. The two 24-second single tourbillons in white metals with white dials failed to reach their reserves, while a more desirable double tourbillon in rose gold with black dial sold within its estimated range.

The mid-market is coming back to earth: Both at auction and in private sales, for instance, it seems that the first-generation A. Lange & Söhne Datograph in platinum, a classic piece if ever there were one, is settling into a trading range at or below $40,000, down 15 or 20 percent from recent trends.

Many have missed the seller’s market: Across the recent auctions, about 20 percent of the watches failed to sell. Among those were large numbers of perfectly desirable watches like Panerais and Rolex Day-Dates for which supply simply exceeded demand, at least at the prices being asked.

Lessons from the (automotive) past

Of course, relatively large swings in collectible luxury goods values are not unprecedented. Take a look at the two displays on the collector car market below. The first shows the behavior of a weighted index from 1980 through 2008, and the second picks up in 2006 and runs through 2014. What we see is that against a long-term backdrop, the most collectible autos have performed very well indeed in financial terms, but with some very substantial downswings during the economic crises of the late-1980s and early 1990s and again after 2008. And as we are seeing in the watch market, even within a brand like Ferrari not all models are equal. A quick peek at the graph below reveals that while values of the most desirable older Ferraris have gone exponential, so-called young classics have been on a prolonged depreciation trajectory, with a few shining exceptions like the Miami Vice-era Testarossa that now seems to be enjoying a renaissance. Enough about vintage; what about new watches?

Over the past several years, it’s been hard to keep up with the pace of the watch industry’s introductions of highly complicated – and highly expensive – watches. Single, double, triple, and quadruple tourbillons; chiming watches; automata; novel systems for increasing accuracy; you name it. 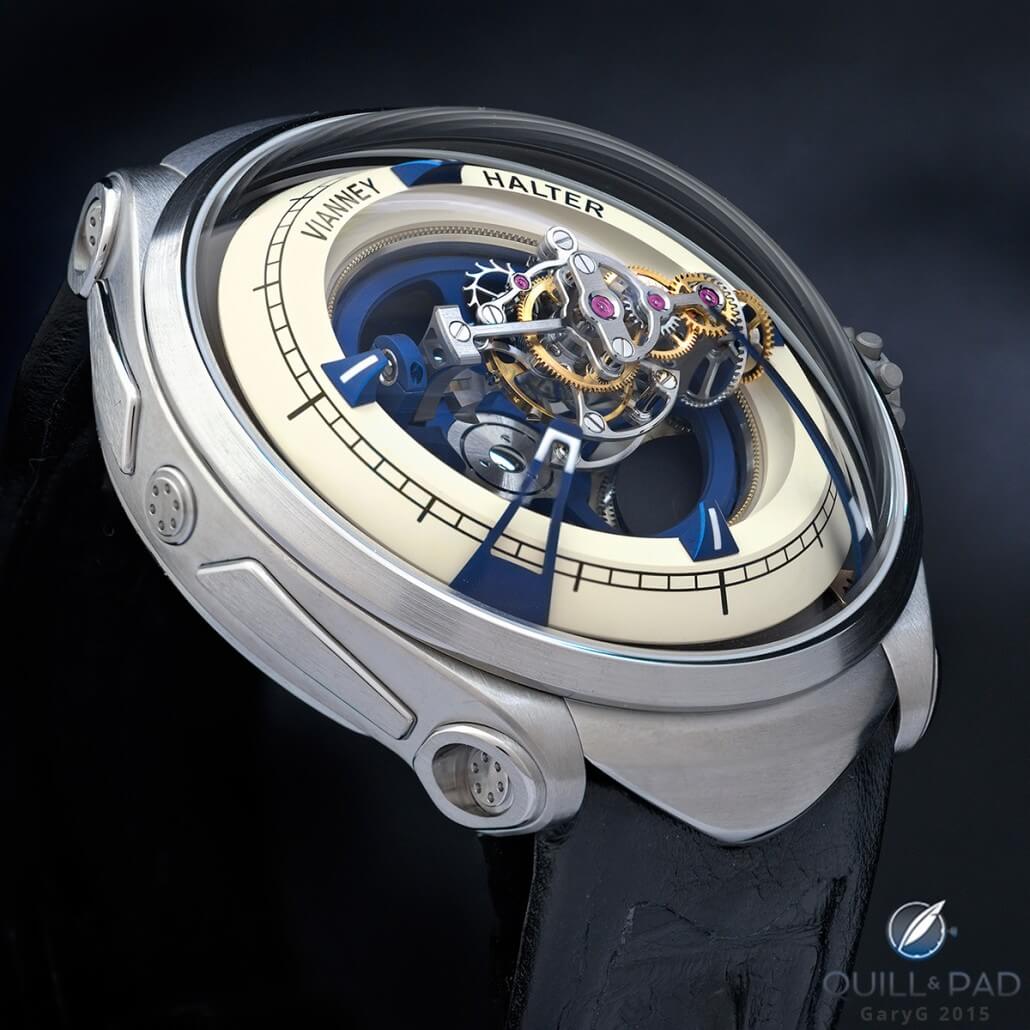 Harvard professor Clayton Christenson famously described what happens when a “disruptive technology” arriving from outside of a traditional industry begins to threaten the established order: the incumbents begin to migrate upmarket, abandoning lower-margin territory to the newcomers and improving their products’ functionality until it significantly overshoots the requirements of the mainstream market.

Faced with disruption from outside and below as well as softening markets in Asia and elsewhere, the watch industry is today at significant risk.

So: what to do as a collector?

Here’s the first question to ask yourself: are you a collector or an investor? If the answer is the latter, what follows is likely to be of limited use to you, though I wish you luck.

For collectors, including those like myself who still need to pay attention to the economic value of their collections to keep from “getting hurt,” perhaps a few reminders of timeless adages and a couple of new wrinkles will help.

Buy what you love: At the end of the day, that’s what this whole hobby (not business) is about, right? Buy what you love: the author’s Jaeger-LeCoultre Futurematic

Think portfolio: I’ve never been more aware of my pal Terry’s sage thinking about types of watches in one’s collection as I am today. There are the “investment” pieces: not in the sense of investing for gain, but core pieces with established market value and timeless appeal that form the center of the plate.

Next, “patronage” pieces: for those of us who support the independents, purchases that keep small, innovative players alive.

Finally, “fun” pieces: those indulgences, at any price point, that just make us feel good.

In a down market, some portfolio re-balancing might be in order. At the margin, might that “investment” platinum A. Lange & Söhne Datograph be a better purchase than the “fun” A. Lange & Söhne Zeitzone in pink gold with grey dial?

Could funds that would go into a couple of “fun” buys be saved up and used for a “patronage” buy that is at least as fulfilling?

I’m not recommending the end of fun or falling into the trap of making your collection look just like everyone else’s as a liquidity play, but in times like these a portfolio view can come in quite handy indeed. Remember your friends: This is no time to forget your friendly authorized dealers; negotiate hard and expect good value, but don’t go running to the grey market just to save a few bucks.

Buy low: Are other people fleeing the market? For a collector, this is a buying opportunity! Suffice it to say that I am scanning the upcoming auctions and current private sales with great interest.

Think solid value: There are limits to how stodgy one should be in a hobby, and I’m one of the worst violators of what I’m about to say. But these days it may be salutary to pass on one or two of those super-complicated watch purchase opportunities in favor of meat-and-potatoes pieces.

At the same time, have the courage of your convictions: A Vianney Halter Antiqua did quite well at one of the recent auctions, beating its high estimate by 25 percent. I bought low several years ago and plan to hold for many years to come. If you see a watch as an enduring classic, buy now – and enjoy for the long term. And what about the makers?

The new watches currently coming to market are the products of years of prosperity and escalating expectations, so I’m not expecting an industry about-face as soon as SIHH and Baselworld 2016.

For the period ahead, I have a few modest suggestions for the makers.

Contest disruption: Avoid the oh-so-tempting urge to keep moving upmarket until you are so far into the stratosphere that no customers remain. For the groups with multi-brand portfolios, be sure to position at least one marque as a fighting brand against disruption. Here, Jean-Claude Biver’s moves with TAG Heuer and Jérôme Lambert’s efforts at Montblanc come to mind.

Innovate within constraints: Unbounded innovation often leads to uninspiring results. Our friend William Massena noted in a recent interview on Hodinkee that the Swiss watch industry has been most creative in times of trouble; now seems the time to demand brilliance within tight confines of cost and re-use of existing components. Independents, walk the tightrope: I wish that I had better advice to give than that! For most independent watchmakers, the challenge is going to be remaining true to an artistic vision while maintaining economic viability. The middle ground may be a more intensive focus on gathering input from the small community of “patronage” collectors and soliciting them for group purchases and “subscription” pieces, while at the same time pushing hard through social media and other promotional means to reach new groups of buyers.

Must every buyer be an aficionado? Perhaps not.

“The Chinese use two brush strokes to write the word ‘crisis.’ One brush stroke stands for danger; the other for opportunity.” – John F. Kennedy, April 12, 1959

As it turns out, Kennedy was apparently mistaken: linguistic experts suggest that the true combination of meanings in the Chinese expression is closer to “danger” meeting “crucial moment,” highlighting rather than diminishing the sense of imminent peril.

What do we make of this?

While the industry must consider whether current conditions truly represent a threat to survival, for collectors perhaps Kennedy’s mistaken interpretation may be more relevant, given the great variety of wonderful watches, both new and vintage, we have available to us.

So for now, keep calm and continue collecting!