This is the second year in a row that I’ve had the opportunity to attend the November watch auctions in Geneva, and this late-autumn auction weekend (which this year also directly followed the date of the Grand Prix d’Horlogerie de Genève) is already one of my favorite watch-related events. One of the top watches of recent auctions: Patek Philippe Reference 1518 in pink gold on the author’s wrist

On last year’s trip, a good friend and I had the pleasure of participating in several events organized by Patek Philippe as well as the biennial OnlyWatch auction (see You Are There: Attending The Only Watch Auction 2015 With Patek Philippe). This year, we returned on our own for the previews and salesroom action at major houses including Phillips, Christie’s, and Sotheby’s.

Once the bug bit, I carried on with some private viewings of vintage pieces and online and phone bidding at the subsequent Hong Kong and New York auctions; it was a busy couple of watch-related months for me!

The great news is that there is a tremendous variety of pieces out there for purchase. Just when it seems that you’ve seen it all, some tempting new delicacy appears on the auction block. There also seems to be an ongoing stream of classic watches such as the Cartier Crash, shown below, coming to market for those who missed out on them in prior auctions. 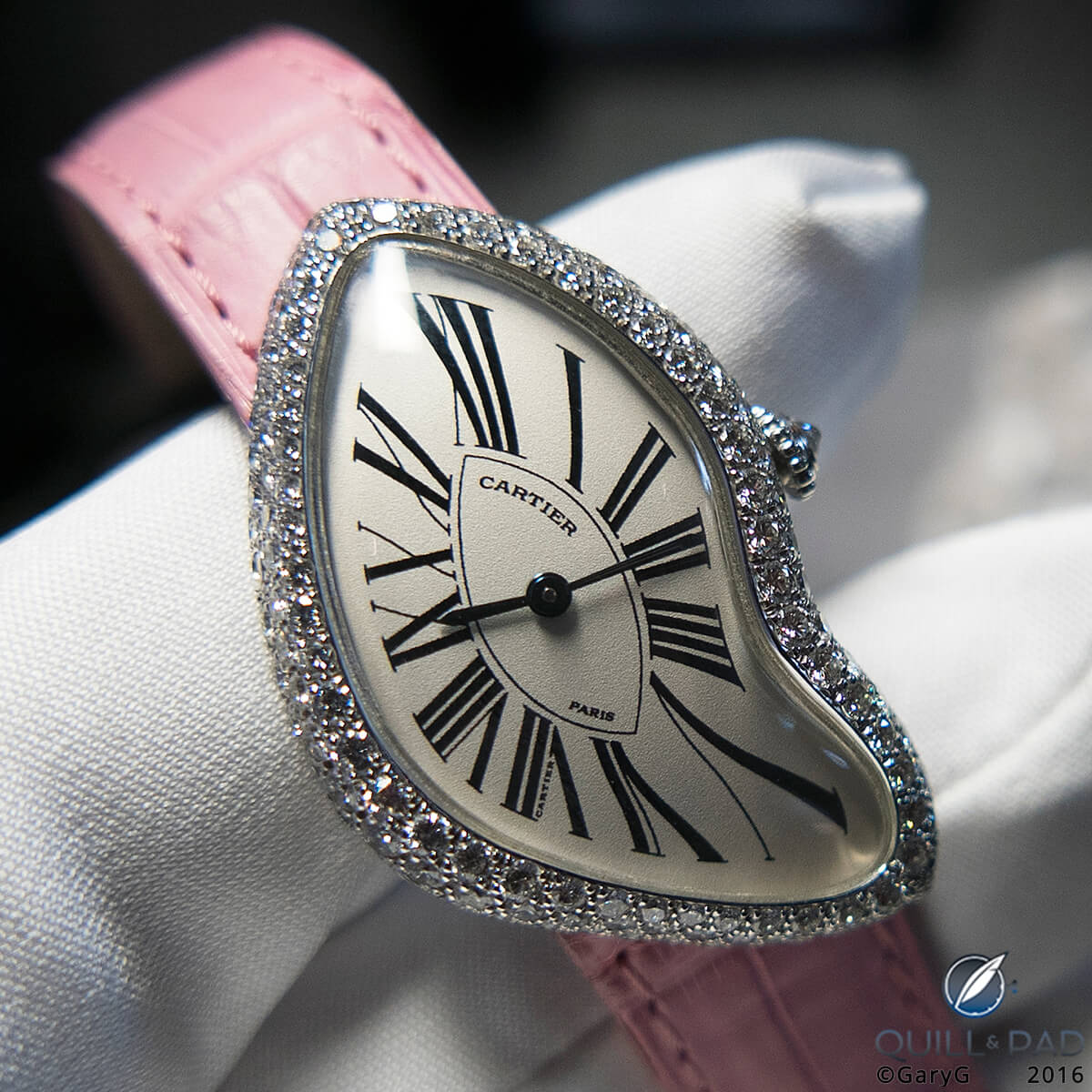 Cartier Crash at Phillips: Mrs GaryG would have loved this one

One of the great things about being a registered bidder at the auctions is the opportunity to handle, photograph, and even briefly wear the watches on offer while having the opportunity to ask questions and review condition notes and origin certificates. As you’d expect, the process is carefully controlled, and for some select pieces such as the stainless steel Patek Philippe Reference 1518 at Phillips (see 4 Record-Setting Stainless Steel Patek Philippe Models Auctioned At Phillips. Is A Fifth Coming?), additional protocols have to be observed. During the auctions themselves, there are opportunities to say hello to old friends from around the globe, see watch royalty like François-Paul Journe and Thierry Stern, and hold your breath as bidding approaches stratospheric levels or “your” lot reaches the block.

In many ways, the pre-owned watch market at the end of 2016 doesn’t seem that different to me than it was late last year when I advised folks to “keep calm and continue collecting” (see Keep Calm And Continue Collecting: Advice For An Up And Down Watch Market). Some indications from that time have become even clearer, and other new signals have emerged as follows.

Patek Philippe and Rolex still rule the roost: Of course, there was the stunning 11 million Swiss franc total tab for the aforementioned steel Patek Philippe Reference 1518, one of only four made and in excellent overall condition, but it didn’t stop there. 11 million Swiss francs on the wrist: a friend tries on the Patek Philippe Reference 1518 in stainless steel

While not every Patek Philippe or Rolex watch drew top dollar – and some items like the Patek Philippe Reference 570, a three-handed steel watch with a low estimate of 80,000 CHF, failed to sell – for every slight disappointment there was an “ermagherd” moment as one or another of the watches from these two auction-favorite brands smashed through its high estimate.

Rarity plus condition drives results: For me, the prime examples in Geneva were two Rolex “Paul Newman” Daytonas bearing the names of retailers Tiffany and Linz, respectively, each of which sold for the eye-watering price of 874,000 Swiss francs through Phillips. Among the less vaunted brands, rarity and condition still led to superior results. One watch that I bid on at Phillips but did not win was a mouth-watering Jaeger-LeCoultre Geophysic that went for almost three times its high pre-auction estimate at 68,750 francs, a reported record for a vintage JLC.

As I look at my photos once again, I’m still wondering whether I should have stayed in the game! At the same time, I have to confess that some of the minor distinctions that drive collectors crazy are still lost on me: witness an “underline double Swiss” Rolex Daytona Reference 6239 at Phillips that went for 310,000 Swiss francs or the even more mystifying (to me) 562,000 francs someone paid for a “four-liner tropical” Rolex Submariner Reference 6538.

Happily, I seem not yet to have achieved enlightenment with regard to the appeal of these pieces, so for now my bank account is just a tiny bit safer!

Depending on your tastes, there are great watches at all price points: Another watch that I bid on was a lovely Vacheron Constantin Turnograph that will be a splendid daily wearer or dress piece for its new owner at a total price of 12,500 Swiss francs. Other brand contenders are emerging on the vintage scene: How can collectors hope to achieve the combination of rarity and condition without paying the astronomical cost of the top Rolex or Patek Philippe pieces?

It seems that other brands are stepping in to fill the bill. Some very interesting vintage Breguet watches did well, with a 1950s dress watch driven by the fine Peseux 260 movement going for more than twice its mid estimate at 52,500 Swiss francs.

And a Breguet piece that I particularly liked, a steel triple-calendar chronograph based on the Valjoux 88 movement, more than doubled its high estimate at 286,000 Swiss francs. Heuer watches seem on the rise, including for instance a Solunagraph with tide indications under the Orvis brand name that sold for 50,000 Francs. And a few Omega pieces did particularly well, including a 1939-vintage sector dial watch that sold for 72,500 francs and an “Alaska Project” Speedmaster that went for 156,250 francs.

Interesting provenance can help: While it seems, at least to me, that the steady flow of ex-Eric Clapton watches onto the auction market (see Phillips Auctions a Trio of Patek Philippe Watches Belonging to Eric Clapton in Hong Kong) has led to a normalization of their value, I do believe that interesting provenance did help several watches in November’s auctions to do well. These included two automotive-themed pieces, a Breguet (once again) Type XX once owned by Formula 1 World Champion Sir Jack Brabham and a Rolex presented by another world champ, Sir Jackie Stewart, to the designer of one of his winning cars. Cycles exist, and contemporary watches are in a down cycle now: If you love high-quality modern pieces, this market may present a superb buying opportunity. Pretty much across the board, prices for contemporary watches are soft so be on the lookout for watches you’ve been pining for – such as the mouth-watering Vacheron Constantin platinum chronograph below that sold for 37,500 francs. In this cycle of late-year auctions, brands such as Greubel Forsey continued to show soft results, and even Patek Philippe’s contemporary pieces were not immune: a “double-sealed” Patek Philippe Reference 5004P split-seconds perpetual calendar sold for a relatively modest 200,000 CHF at Phillips and a double-sealed Reference 5970G perpetual calendar chronograph went for $125,000 at Christie’s in December.

If your tastes are more eclectic, consider that a set that I love, the Ulysse Nardin Trilogy of Time comprising three stunning astronomical watches, sold at Sotheby’s for a total of under 70,000 Swiss francs!

Philippe Dufour remains in a league of his own: Amidst the gloom and doom in the contemporary watch market, the first three Dufour Simplicities ever to be auctioned each drew a staggering result on the order of $250,000. The story of each of my late-2016 purchases deserves a column of its own, I think! That said, I won’t hold you completely in suspense until then. I’m very pleased to report that I won the bidding war on two pieces. The rules still apply (see Living Beyond Your Means As A Collector: How To Avoid Getting Hurt)!

With my auction purchases (along with a modern Patek Philippe timepiece, which you can see in Why I Bought It: Patek Philippe Reference 5370P) I both bought what I loved and re-balanced my watch portfolio with more of an emphasis on recognized classics from major brands.

I also learned, or re-learned, several pointers for buying at auction: Maybe next time: a Patek Philippe Reference 2438-1 from the Phillips Geneva Auction: Four

Please feel free to comment on your own auction experiences in the comments section below and happy hunting!