Epic journeys must end. All grand adventures reach a conclusion. And every life-changing moment will culminate in a quiet moment of realization that you have reached a point where there is nowhere else to go except home.

This is the hero’s secret, one that only the hero ever truly understands and one that the hero must bear alone. When The Lord of the Ring’s Frodo finally destroys the ring of power, he knows that the world has changed for him and that he must find a new path.

This is the conclusion many epic tales experience, at least ones that show the side of painful truth to the heroic quest.

While I may never save the galaxy from the dark side or defeat the most powerful wizard in history, I have experienced, albeit briefly, the fleeting joy and eventual understanding of completion and the relentless march of time.

No matter how great an accomplishment, the universe moves steadily forward and a glorious adventure becomes a moment in the past. For this reason, for most of us the next adventure is usually not too far off in the distance. After arduous and exhausting trials of skill and wit over many years of one’s life, sometimes the best path is the one with new challenges and goals.

This is especially true if you are a watchmaker tasked with learning all of the extremely difficult skills of traditional watchmaking in hopes of disseminating these skills to the next generations for years to come.

This is the true story of Michel Boulanger and the conclusion of his first epic adventure and the beginning of the next one.

This is the end of the story of Naissance d’une Montre, Le Garde Temps. The Naissance d’une Montre watch has been at least four years in the making, with huge amounts of time invested in teaching, learning, practicing and researching the process of making a watch by hand, entirely using traditional methods.

Basically, it has been four years of heartache, madness, patience, and the glorious blossoming of understanding. And now the watch is finished.

The mechanism has been vetted and proven sound; construction techniques have been absorbed and perfected; and the final product is a beauty to behold. Its simplicity and cleanliness is something that is extremely hard to find anywhere in the modern world. The Naissance d’une Montre watch is finalized (for the most part) and is in production and nearly ready for delivery.

With Robert Greubel, Stephen Forsey, and Philippe Dufour involved, it should come as no surprise that the fine finishing alone has taken a huge amount of time to achieve in the quest for the most perfect results possible while staying true to the goals of traditional watchmaking. 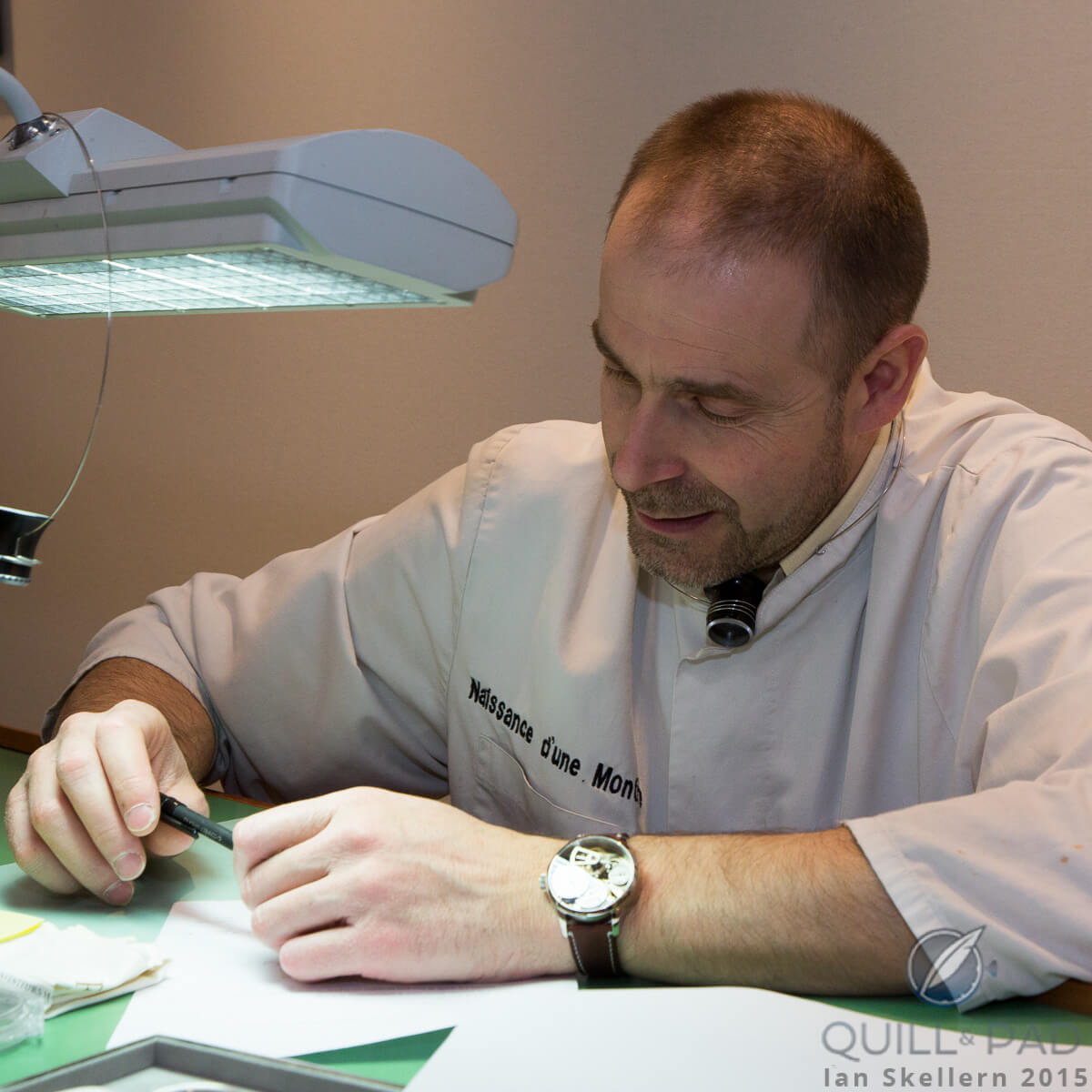 The first cased-up prototype movement was shown at SIHH 2015 and a year later at SIHH 2016 a finished (well, nearly) watch was unveiled as plans for the next steps unfold.

The finishing on the Naissance d’une Montre watch is, of course, superb, though it does lack the occasional extravagant finishes seen on many Greubel Forsey pieces, opting instead for a more traditionally appropriate set of historical techniques.

Fine finishes are all executed beautifully with blasted bridge faces, polished bevels, straight, circular, and radial graining, and even polished teeth on all of the wheels.

Only the hands and a screw holding the tourbillon bridge are blued, keeping the contrast on the minimal side. The tourbillon bridge features a gold screw-mounted chaton. The wide bridge is skeletonized for a better view of the mechanism and possibly to enable access to the watchmaker when regulating the timing.

Like a Greubel Forsey movement, the depth created by the Naissance d’une Montre bridges and mechanism is truly awesome when combined with the straightforward decoration.

One of the most interesting aspects of the watch is the signatures you find on the dials and movement. The names of the three “teachers,” Greubel, Forsey, and Dufour, are located on the main time dial.

Why not Michel Boulanger, who performed all the work? Because his name is engraved into the movement itself, right underneath the tourbillon.

Historically, the movement maker signed the movement, not the dial, so this is a nod to horological history and an awesome graphical detail that keeps visual interest everywhere you look. Boulanger’s name also appears engraved on the back of the case, along with the name of the project. No longer a prototype, the production version of Naissance d’Une Montre, Le Garde Temps on display at SIHH 2016

These aren’t the only signatures you will find; however, the others will have to be deduced rather than read. The signature styles of the founders and the watchmaker are everywhere in this movement in the way certain components are finished, how they are shaped, and how certain things were engineered.

The winding mechanism and ratcheting click has Dufour written all over it, while the dials and the stout bridges feel very Greubel Forsey.

Boulanger hiself was the driving force behind the tourbillon cage, spending six months prototyping cages searching for the perfect design inspired by style from more than 200 years ago.

The final result of the Naissance d’une Montre is an amalgamation of all of the characters in this epic journey and the knowledge they bring to the table.

And the final result is stunning. The end is the beginning

With the final version of the watch finished, the first adventure is complete, but a new journey begins with the arduous task of making ten more timepieces. The watch is finalized, barring minor changes to finish applications and hand details, so the next step is the production of the eleven pieces, the sales of which will help fund platforms hosting information gleaned from the skills and techniques honed during the project.

The first journey paves the way for the next and so on; it is the perfect circle of epicness.

And epic it will be. Making ten of anything is much harder than making one. Granted, things can be done in batches saving setup time for all ten pieces, but the construction of ten identical (and usable) components usually results in at least twice as many parts being made and half thrown out due to small errors, something that Boulanger has already experienced in the prototyping phase.

Thanks to assistance from Greubel Forsey’s Didier Cretin and Jean-François Erard, the movement has been thoroughly optimized for “production”, along with increasing component quality through seemingly minute yet critical adjustments to shapes and dimensions.

As the process of creating the rest of the watches begins, the team is already looking forward to the adventure to follow.

When the watches are made and delivered to the very happy clients (most of which are already spoken for), Michel Boulanger will then return to his teaching post and begin to share everything he learned.

That is a monumental task in its own right.

Taking four years of knowledge (plus the rest of his considerable experience) and condensing it into something easily taught, nurtured, and transferred to a new generation is no easy feat. The preparations for this task began right from the start as Boulanger − already a master watchmaker, watchmaking teacher, and experienced clock restorer − was just beginning his learning process in the Naissance d’une Montre project.

And the process of sharing that information will be an ever-growing job as he learns more during the production of the pieces.

Of course this is a long process, so there is time to contemplate the scope of what is to come, but the feeling of great accomplishment also follows with each stage being completed.

Epic journey number two: build a series of the watch you designed for sale and to better understand the processes and techniques learned in the first epic journey.

Epic journey number three: take all of the information gleaned from the first two adventures and spread that knowledge like leaves in the wind into every mind that will accept it. The first journey is over. It is definitely a time for reflection and understanding and for yearning to begin anew.

The second journey begins the moment Boulanger’s mind forms the work and will continue for a fairly long time.

The third and (possibly) final journey in this epic trilogy is to live what he has learned and to spread it to open minds and capable hands.

What comes after that, nobody yet knows. I, for one, intend one day to find out. For more information about the project, please visit www.legardetemps-nm.org.