A Richard Mille Boutique In Germany? Yes, And It’s About Time

I recently went to a boutique opening thrown by Richard Mille in Munich.

Now, before you click away thinking, “Ho, hum, not another post about a watch store!” please hear me out.

First of all, Richard Mille is not just any watch brand. Secondly, think about it for a minute: who opens a standalone boutique in a country filled with really, really traditionally minded collectors – in this financial atmosphere?

And, third, naturally there was a surprise in store – like there always is when Richard Mille is involved.

Why Germany, why now? But one thing that Richard Mille has not yet done in its 15 years of existence is enter the German market. And 2016 seems like a fairly interesting time to do this when you consider that exports and sales of fine Swiss watches have decreased almost everywhere.

However, both Richard Mille (the man) and Peter Harrison, CEO of Richard Mille Europe, Middle East, Africa (EMEA), explained that the Swiss brand’s business has felt none of the same tremors that seem to be rocking the rest of the luxury industry’s retail strategies. Sales remain strong with a continuing tendency toward getting stronger for Richard Mille. Mille always wanted to be present in Germany, but he knew that he would need to have a standalone point of sale; the German retail landscape is a difficult one for a “new” brand to break into.

Mille and Harrison were also very aware that the brand has plenty of customers in the Teutonic land despite the lack of a dedicated point of sale: statistics derived from the other boutique locations were encouraging enough. The trick was to find the right location in the Bavarian capital Munich, and Maximilianstrasse 34, a historical corner building comprising 160 square meters on one of the city’s four “royal avenues,” turned out to be just the thing.

After about a year of renovation, the new boutique was finally opened in April 2016. Its façade and inside environment were organized by Mélanie Treton-Monceyron, the brand’s artistic director. It was surely not easy to put something as forward-looking as Richard Mille’s timepieces in a historical building with strict rules and regulations regarding what may or may not be changed, transformed, and amended. Thus, the intriguing aesthetics of Richard Mille’s technical timepieces are thrown into that much more of a contrasting environment here – bringing the amazing elements of both timepieces and building far into a beautiful, yet contradictory foreground. The inside of the boutique looks much like the brand’s others with its fastidious attention to detail, including black “elephant hide” leather wall coverings, Macassar ebony furnishings, and lots and lots of natural light thanks to mirrored and glass surfaces.

And that surprise I promised you?

It seems like it should be a no-brainer for one of Richard Mille’s many ambassadors to be on hand at the boutique opening, but still I hadn’t expected to see one. Therefore, I myself was quite surprised to be placed next to rally champion Sébastien Ogier at the dinner following the opening cocktail. This relationship is so new, in fact, that the word, officially announced during the 2016 SIHH, has hardly gotten out – and so new that the Volkswagen rally driver doesn’t even have a limited edition named for him yet, which is perhaps why he seemed slightly apologetic to show me his wrist when I asked to see what he was wearing. “It’s a Felipe Massa Richard Mille 011,” he sheepishly pronounced as I excitedly took a gander at the technical lovely he was wearing.

Ogier, a TAG Heuer ambassador for five years before switching to Richard Mille, explained that signing up with the fuel-injected brand has exceeded his expectations. Introduced to each other by Nicolas Todt, son of Jean Todt, Ogier is very happy with his choice. “I really appreciate the authenticity of his watches.” “I completely feel like I’ve stumbled into a family here,” the three-time World Rally Champion went on to explain. “I’m so glad to be in such a great working relationship with someone else so passionate.”

As with all of the brand’s professional relationships, Richard Mille has entered into an extended contract with the rally prodigy, who won the Race of Champions in Düsseldorf in 2011 (making him “the champion of champions”).

Ogier was indeed quite enthusiastic in talking about both his chosen profession and his new tie to Richard Mille: “He’s not just any watchmaker; he has a big reputation in the car racing world. He is also enthusiastic about the field and has authentic ties to it.” 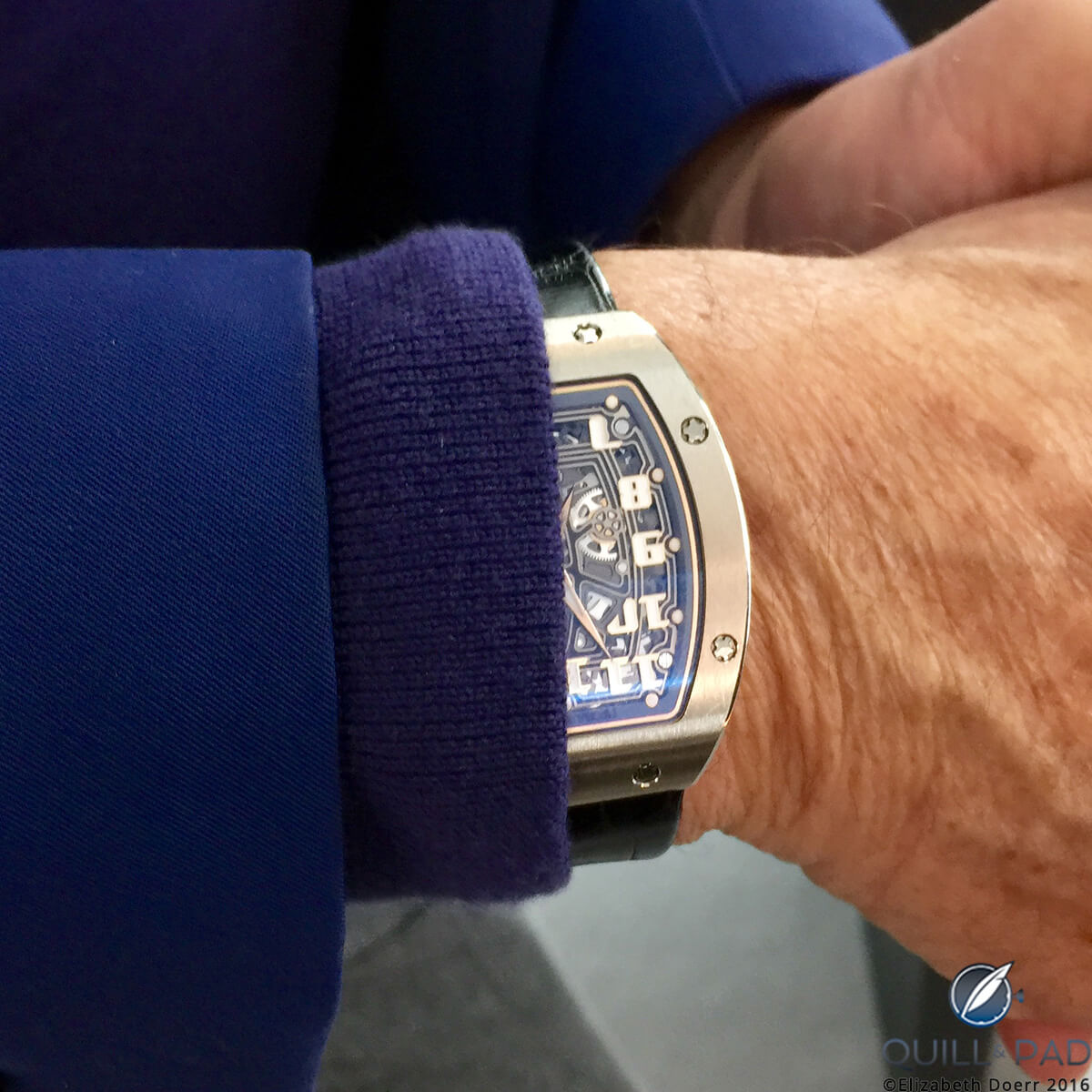 One of the watch brand’s contract stipulations was for Ogier to wear his watch while driving. “I had never driven with a watch before because they’re not made for it,” the 2015 WRC champion explained as the evening wore on. “But, as Rafael Nadal says, a Richard Mille is like a second skin. Being inside a rally car isn’t like a Formula 1 cockpit where space is limited, so the size of the watch matters less than the comfort. In my field, you’re constantly fighting against the clock to gain a few tenths or even hundredths of a second. So the reliability of the chronograph is another decisive factor.”

Ogier impressed me greatly with his enthusiasm and competitive spirit, both in terms of his own chosen profession and that profession he has chosen to tie himself to when he signed with Richard Mille. “To be successful, it shouldn’t feel like a job,” he explained his stance.

The Richard Mille Munich boutique is open Monday through Saturday from 10:00 to 6:00 pm.