My Vote For The 5 Ugliest Watches Ever

As the saying goes, “There’s an ass for every seat.”

While this is very true, I still find it so hard to believe that some watch designs are ever even considered, much less actually produced and ultimately purchased. In fairness, the following list may not actually contain the five ugliest watches ever, but they sure aren’t easy on the eyes.

While I might not win any fans from the brands whose watches I’ve nominated for this list, or those who’ve designed or purchased one of these works of horror-logical creativity, I would still like to have some fun at their expense.

The Krieger Skeleton Skeleton is ugly inside and out.

There’s a complete lack of fine finishing on the limited amount of plates and bridges, while a mangled skull hovers over the barrel with two rubies for eyes. I’m not going to say what the crown looks like to me – and I’m sure you can figure it out – but it isn’t as pretty as what comes to mind.

To add insult to injury, Krieger not only produced and tried to sell this watch, but continued to forge ahead by creating an incredibly creepy advertisement for it. Seriously: guyliner?

I imagine this dude listening to Goth music and doing some heavy drugs while watching a Saw marathon.

Charlie: Hi, I’m Charlie and I have a gambling problem.

Azimuth: Hi, Charlie, we’re the Azimuth Watch Company and, boy, do we have the watch for you! We took a big block of metal and put a really small roulette table on it that actually works. You activate the ball using the oversized dice cube that doubles as a crown.

By buying this watch, you and your buddies can lose money to each other all day long.

If you lived in the 1970s, what would you have gotten for the cheeseball rich guy in your life with a fragile ego? A Corum Rolls-Royce watch, of course! If this watch doesn’t scream, “I have a lot of money to waste and need to be noticed,” then no watch does! Its gaudiness can only be assimilated by the likes of a guy like this.

I have to give credit where credit is due: the the Jacob & Co. Astronomia Tourbillon Baguette is one serious piece of horological mastery.

It is also fugly. 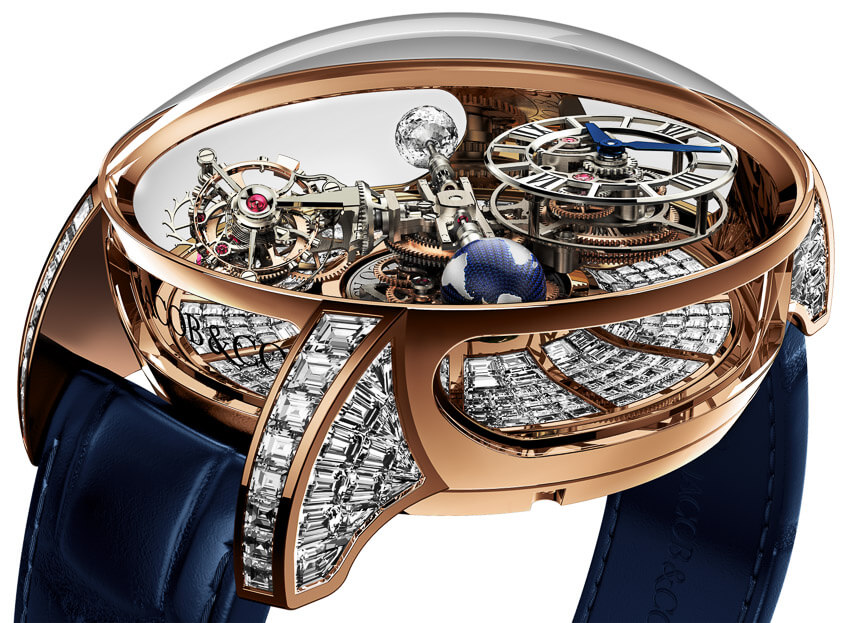 If the diamonds were removed and its size were scaled up 12:1 and then someone put it on a four-legged pedestal as the centerpiece for a museum, then by all means, it would count as a work of art.

But to see this monstrosity on an average wrist is simply absurd. It measures 50 mm in diameter and 25 mm in height!

Oh, and I almost forgot to mention that it costs north of $1 million!

For more on this watch, please see Jacob & Co Astronomia Tourbillon Baguette: A Universe On The Wrist.

First off I’d like to apologize in advance to anyone who likes this guy, but I’m going to say it anyway: Kanye West has to be the most egotistical, self-indulgent ass on the planet. Now, I’ve never heard one of his songs so he may be a great entertainer, but I’ll continue to go the rest of my life not having heard one on principle.

West had this gold-and-diamond-encrusted piece of self-absorbed garbage commissioned from Tiret for $180,000 (see A Victory in Vanity: Kanye Spends $180,000 on a Watch with His Face).

In this watch blogger’s humble opinion, it is easily the ugliest watch that I have personally ever seen.

All opinions are my own. My Vote For The 5 Ugliest Watches Ever (Archive)