The Loving Butterfly Automaton tells a story with its expressive dial and ultra-creative mechanics. On the surface, the Loving Butterfly recounts the story of a scene in the woods, perhaps in the forest surrounding La Chaux-de-Fonds, where it’s possible to have one foot in Switzerland and another in France.

La Chaux-de-Fonds and its regional craftspeople have taken inspiration for their exquisite timepieces from nature for centuries. Even Pierre and Henri-Louis Jaquet-Droz, whose famous androids imitated human beings 242 years ago. So lifelike were these androids that in their day the poor watchmakers were often accused of witchcraft. Among the three automata that thrive in Neuchâtel’s Museum of Arts and History, The Draughtsman, capable of drawing thanks to a series of complicated cams and levers, was often programmed to draw a cherub seated in a chariot drawn by a butterfly. And this loving theme, one that Jaquet Droz’s modern craftspeople often reproduce on their own works of art, is the second story chronicled by the Loving Butterfly.

And, as you can probably guess, this meticulously crafted timepiece does much more than tell the time.

Setting the scene of the Loving Butterfly

The base for this masterpiece is the Petite Heure Minute dial, whose expansive space makes for the perfect stage, allowing the characters to steal the scene. A previous perfect example of this was the Butterfly Journey of 2015.

What we note is that the hand-engraved and enameled three-dimensional butterfly from that collection is positioned in nearly the same place as on the Loving Butterfly Automaton, becoming the focus of the dial rather than the time display, or at least putting them on equal footing.

I like this because it reminds me to stop and smell the roses and to stop wanting to rush around under time pressure.

The three-dimensionality of the delicate butterfly makes it seem like it has come to life – and indeed, all it takes is a push of the crown button to set the golden butterfly gracefully flapping its wings, which it does 300 times over the course of approximately two minutes. The forest making up the background is a naturalistic nod to the La Chaux-de-Fonds area; the hypnotic scene featuring hand-engraved trees only 0.2 mm thick glows brightly against the backdrop of an onyx or Polynesian black mother-of-pearl dial.

Rather than simply be stacked on top of the other, each of those trees are set onto pinions, just like the hands of a watch. This is another watchmaking technique Jaquet Droz uses in the service of art. Additionally, the 40 individual parts of the little Cupid-and-butterfly tandem, meticulously hand-engraved in white or red gold depending on the case metal, appear to move, gracefully pulled by the butterfly, thanks to the turning chariot wheel driven from the same barrel deep within the automatic movement as the butterfly.

The mechanics of the Loving Butterfly

Because of its unique history with automata, Jaquet Droz continues to produce amazing feats of miniaturized mechanical marvels. These have most recently included the Bird Repeater, the Charming Bird, and the Lady 8 Flower. The chariot wheel appearing to revolve quite quickly is actually an optical illusion made possible by a combination of fixed and motive spokes, a technique often used by automata designers; it is driven from the same barrel within the automatic movement as the butterfly. Two patents are pending on the entire automaton mechanism, which took three years to develop (and explains why we can’t reveal too many details on the precise mechanics just yet).

There are a total of three spring barrels within this movement, two powering the movement and one powering the automaton. 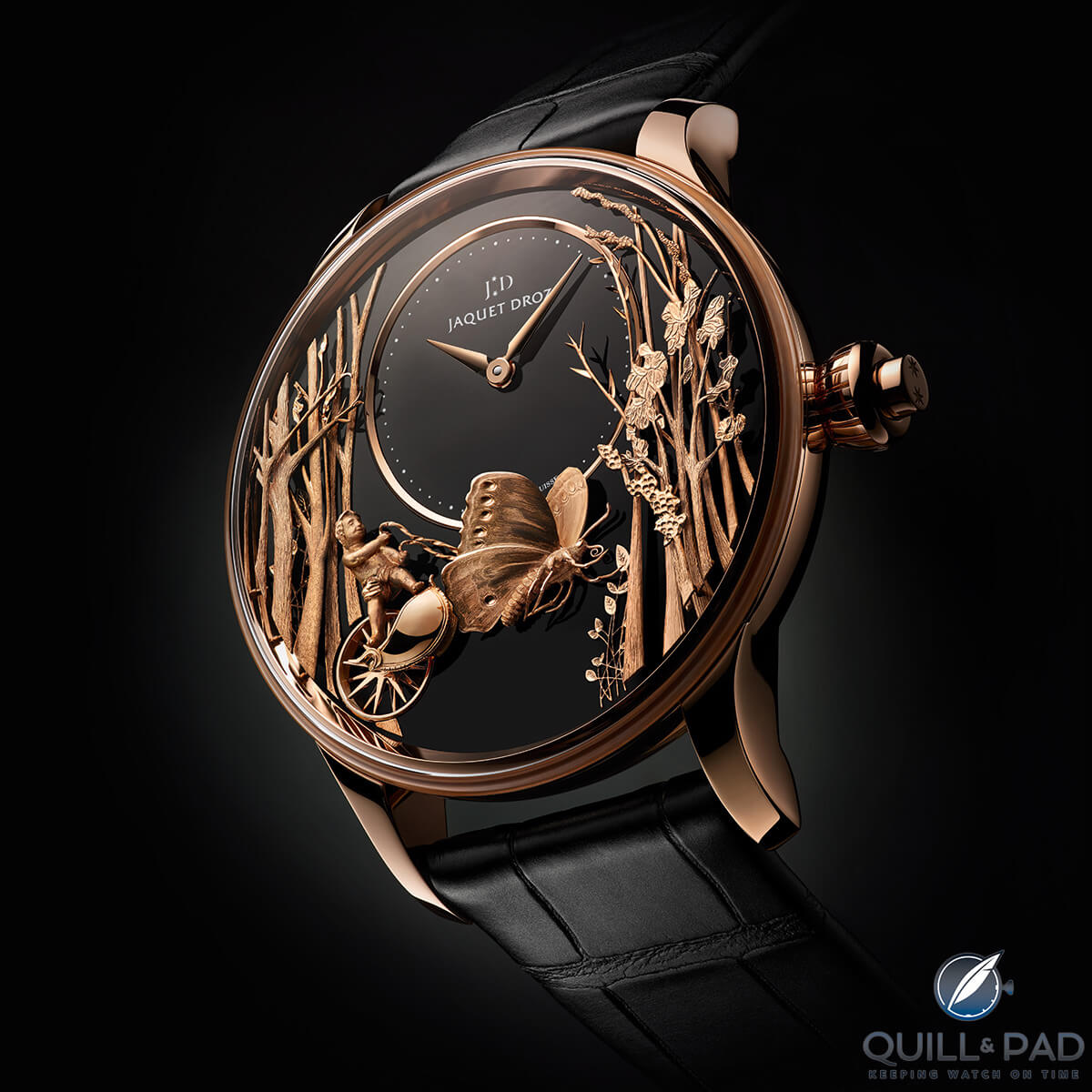 The father-and-son team of Pierre and Henri-Louis Jaquet-Droz would definitely have loved this modern-day tribute to their painstaking work.