Jaquet Droz launched the original Bird Repeater in 2012, a masterful miniaturized automaton based on a repeating mechanism that simultaneously moved bird automata replicating a species found in the Jura called mésange. The moving birds were set against a waterfall background that moved in place of running seconds.

Then in 2015, Jaquet Droz introduced another rendition of this lovely repeater honoring Geneva, the city in which Pierre Jaquet Droz opened his third workshop in the year 1784. The animated dial of that highly collectible timepiece costing about half a million united the Swiss city’s major symbols in miniature painting including Lake Geneva with its famous Jet d’Eau fountain and lighthouse (le Phare des Pâquis) as well as an outline of Salève, the Alpine peak discernible from the shores of the lake.

Now, the brand draws on its long history in automata to continue the line of what is certainly Jaquet Droz’s most complicated work of art in the modern era, creating what is basically a short film: The Jungle Book comes alive on the Tropical Bird Repeater’s dial. 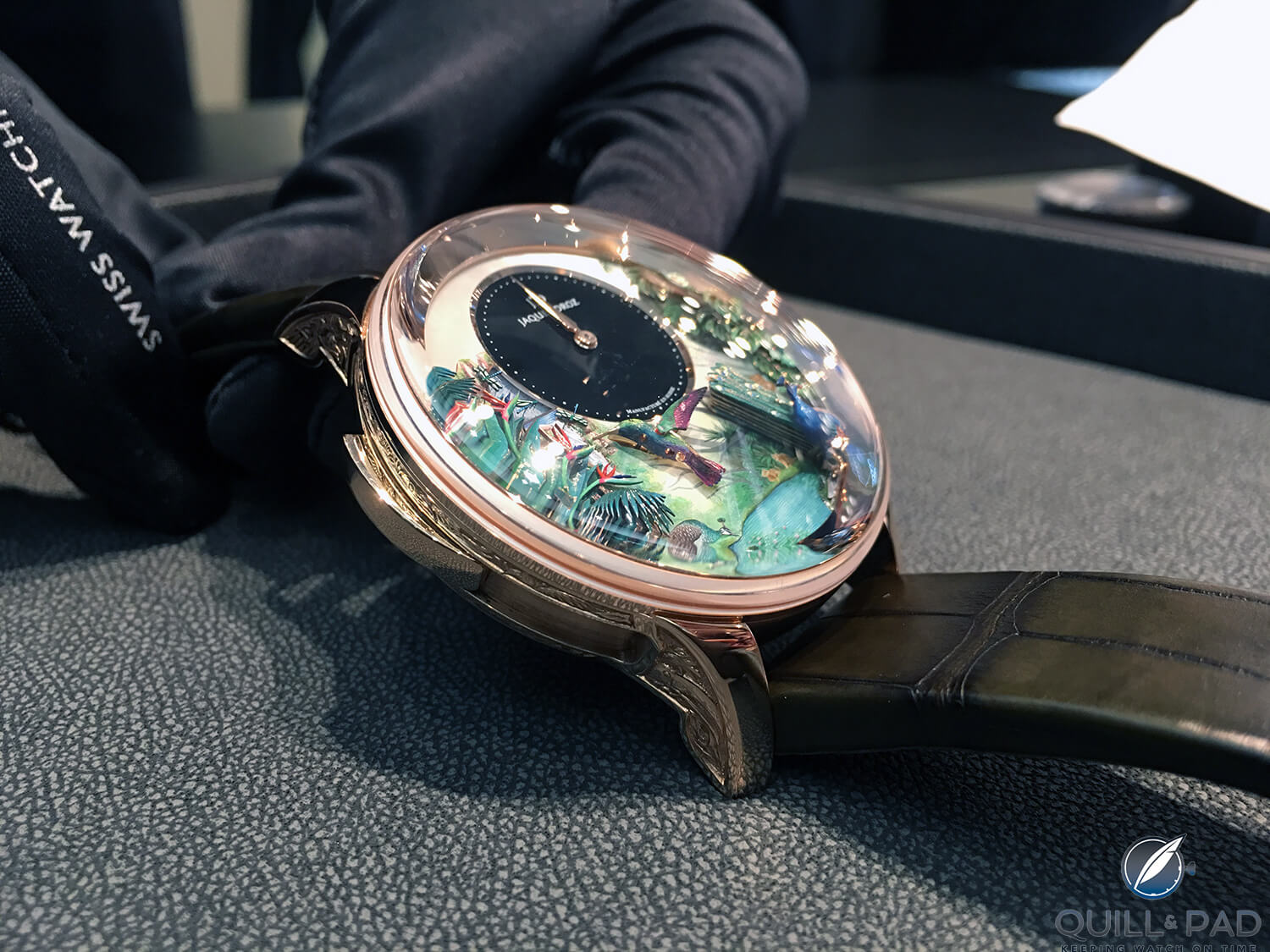 While in horological parlance a “tropical” dial generally refers to the patina on the dial of a vintage Rolex, with the Bird Repeater “Tropical” takes on a whole new meaning!

The new Tropical Bird Repeater is even more three-dimensional and detailed on so many levels than the original Swiss-themed versions. In fact, this lush oasis of color against the background of a shimmering mother-of-pearl dial offers a total of seven moving elements, each of which may run for longer than 12 seconds. In combination, they can offer four different scenarios. In the upper left-hand corner where running seconds would usually be, a softly flowing waterfall fills a lagoon at the bottom of the dial and irrigates the richly coloured flora and fauna scattered throughout the shimmering backdrop.

When the repeater slide is activated seven moving elements may spring to life, including what is surely the most obvious and intensely interesting of them: a hand-engraved and -painted hummingbird that moves toward a shrub of bright orange birds of paradise. And not only does it move about the shrubbery, this unique bird’s wings beat up to 40 times per second while doing it!

The eye is simply fascinated. On the lower right side of the dial, there is an almost-just-as-intense event happening: a peacock opens and closes its brightly painted tail in a characteristic fanning motion.

Another tropical animal, a toucan, also emerges from behind a palm leaf at 3 o’clock, at which point it opens and closes its beak to simulate a caw. The Jaquet Droz Tropical Bird Repeater from the side: the boxed sapphire crystal and absence of bezel allows viewing from almost every angle

And what is perhaps my favorite detail takes place at 9 o’clock: a tiny dancing flight of dragonflies takes to the jungle skies, vibrating slightly as the watch moves. Their tiny wings are coated with Super-LumiNova so that they glow in the dark, making them visible both day and night.

These three-dimensional elements are fixed to the dial the same way that the trees are fixed to the Loving Butterfly’s dial: set onto pinions, just like the hands of a watch – which is a clever patented solution. Within its red gold case hand-engraved with an animal motif, the mechanics of the Tropical Bird Repeater remain as stunning as ever, though some elements have been upgraded for this version, resulting in a new caliber called RMA89. View through the display back to Caliber RMA89, a minute repeater movement powering the Jaquet Droz Tropical Bird Repeater

This new minute repeater caliber is also louder than its predecessor models, and its regulator is much quieter – in fact, I would say it’s virtually silent. New rack springs extend the pause between the ding-dong of the quarter hours and the beat of the hour dong, thereby extending the length of the scene in play on the dial.

The shape of the bridges is also slightly different from those of its predecessors; the decoration here is varied as well in that it resembles the regular collection calibers’ sunburst pattern more closely.

While the previous caliber had a 48-hour power reserve, the RMA89 movement – which oscillates at a 3 Hz frequency – boasts 60 hours. The onyx dial of the Jaquet Droz Tropical Bird Repeater