Not that long ago here on Quill & Pad, I used words and pictures to describe my affection for what I believe to be an oft-overlooked element of watch design: the external cases that clothe mechanical marvels and why, in my view, certain cases are exemplary demonstrations of the case maker’s art (see Why I’m All About That Case, That Case . . . ).

Well, to know me at all is to know that in my convoluted thought processes, one thing inevitably leads to another, so it wasn’t long before my thoughts turned to other elements of the watch, including one major system that is always there, but generally hidden from sight: the movement. Is this A. Lange & Söhne Double Split movement the best of all?

Happily, I am not remotely going to attempt to answer that question here!

If you’re bored on some cold winter evening and in search of some watch-related amusement, one thing that you can do is to type the question above into your search engine and go through some of the forum threads that pop up. While the patterns of the dialogues vary a bit, the usual narrative includes several types of characters:

To avoid arguing with myself, I concocted a strictly subjective and completely arbitrary set of criteria for the movements I will feature here:

It may seem a bit odd to start with an ETA movement given its ubiquitous nature, but how better to capture the criteria of standing the test of time and appearing in multiple guises?

My 2824-based watches were both from Peter Speake-Marin: the one-handed Shimoda and the three-handed Fighting Time with its wonderful dragon engravings and mokumé gane dial by Kees Engelbarts. Speake-Marin started with a chronometer-grade 2824 and then made a number of changes, including the addition of a “topping tool” rotor to the automatic winding system to modify it into his own Caliber FW2012.

The Shimoda was notable for the tiny diamond atop the “seconds” shaft at the center of the dial that sparkled its way around one turn per minute; in the more recent Speake-Marin Velsheda one-hander this has been replaced by a “topping tool” symbol, but I rather like the romantic nature of the earlier design.

And, for my watch Speake-Marin was kind enough to have an engraver apply a wonderful pattern of swoops and curves to the plate behind the winding rotor. Winding system of the modified ETA Caliber 2824 in the Speake-Marin Shimoda No. 1

The first-generation Jaeger-LeCoultre Géographique world timer was a watch that I simply had to have from the moment I saw it; I eventually bought mine at a duty-free shop at the Brussels airport and still own and wear it today. Behind that pretty face is a highly inventive movement: JLC Caliber 929, which over the years has gone through a number of updates leading to today’s Caliber 939.

For me, the coolest part of the 929 is the clutch-equipped second time zone adjuster that is actuated by the crown at 10 o’clock changing the indications on the small second time zone dial at 6 o’clock, its accompanying 24-hour indicator, and the peripheral dial listing the world’s cities.

While they were at it, the movement designers added in a date subdial and a power reserve indicator.

Whenever you see all of these indications in the quite distinctive locations they occupy on the Géographique, you can be confident that the underlying movement is a relative of Caliber 929/939 whether the dial is labeled Jaeger-LeCoultre, Audemars Piguet, or Vacheron Constantin. Take a look below at my Géographique and its departed (and sorely missed) cousin, the Vacheron Constantin Overseas Dual Time. 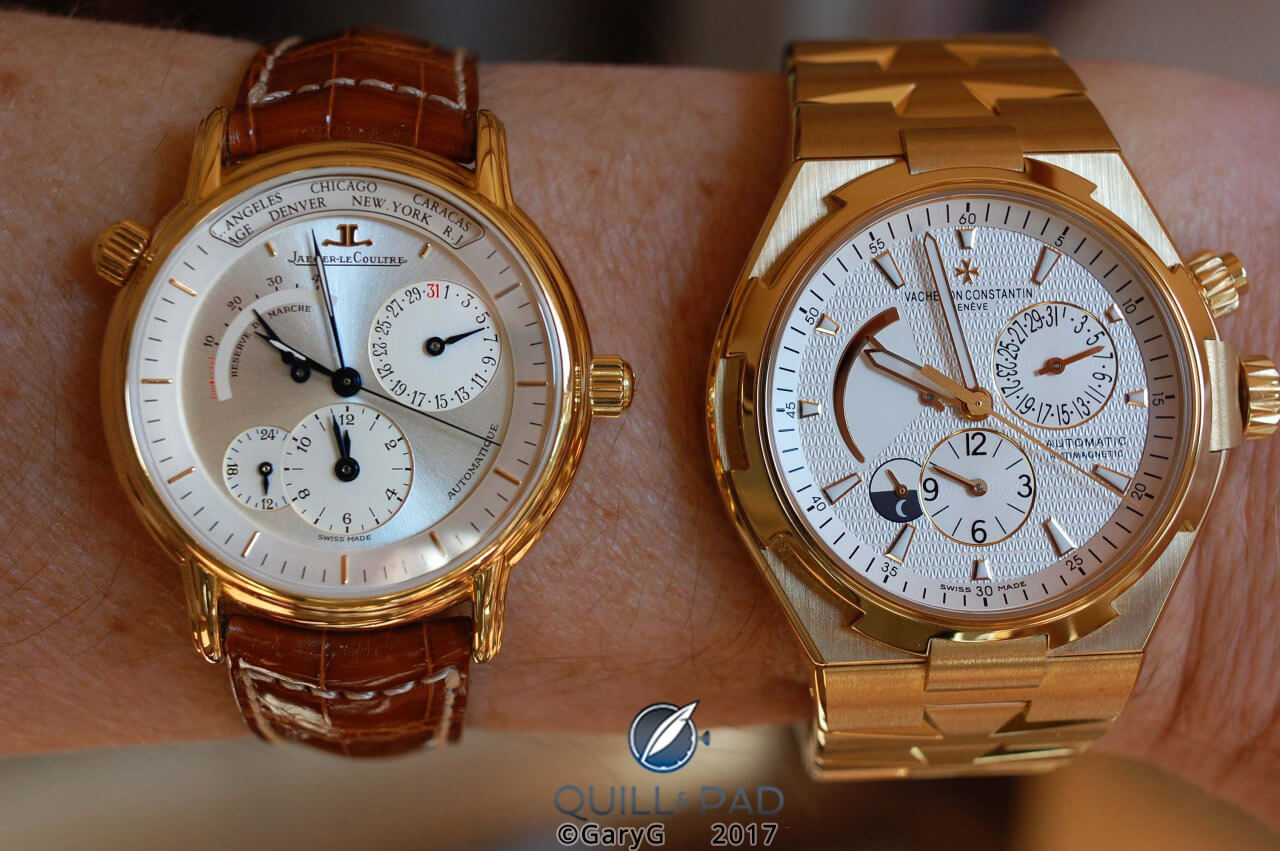 One thing that takes a bit of getting used to is the sound. When I first owned my Géographique, I thought that the movement must be broken by the way the rotor clunked around on its bearings, but over time started to find the sound almost reassuring.

This one’s a bit of a cheat as I’ll talk about not one, but two movements with related parentage. The THA Monopoussoir movement appears as Caliber 45MC in the Cartier Tortue monopusher chronograph and is also found in the De Bethune DB1. The La Joux-Perret Caliber 5000 powers the Ulysse Nardin Monopusher and small production run watches from Baume & Mercier and Carl F. Bucherer. Each of these movements are cult pieces as a result of the people behind them: THA was a collaboration among F.P. Journe, Vianney Halter, and De Bethune founder Denis Flageollet; subsequently, Journe created a further development of the movement that is different from, but clearly kin to, the THA and granted the rights for its use to La Joux-Perret. On the wrist: Ulysse Nardin Monopoussoir chronograph with movement designed by F.P. Journe

The Ulysse Nardin Monopoussoir was the first “Journe” watch that I owned, and I still miss it having sold it several years ago. But you can’t keep them all!

What do you call a movement that was made in small numbers between 1944 and 1967, was intended for timekeeping competitions, and never meant for use on the wrist, but has found its way into watches by L. Leroy, Breguet, RGM, Bucherer, Jean-Baptiste Viot, and Kari Voutilainen among others?

The answer of course is the beautifully designed and fantastically accurate Peseux 260.

The 260 is one of those movements whose geometry is immediately recognizable when seen from the rear, whether the piece in question is a roughly finished original ébauche or a jewel like one of Voutilainen’s realizations with gleaming bevels and sharp interior angles. Gleaming jewel: Peseux Caliber 260 in the Observatoire by Kari Voutilainen

Without a doubt, my favorite implementation of the 260 is in Voutilainen’s Observatoire; once I saw a photo of this beauty I immediately sent Kari a message begging to get on the list for one.

For me it’s almost the perfect time-only movement; the only fly in the ointment is that you need very strong fingers as it’s incredibly difficult to wind!

I must have a thing for ruby wheels: the presence of ruby bearings on the prominent chain in Romain Gauthier’s Logical One did a lot to start my obsession with that piece (see Why I Bought It: Romain Gauthier Logical One), and one of the most notable base movements of all time has tiny ruby wheels that support the winding rotor as it tracks around atop a beryllium ring. Ring around the rubies: skeletonized Caliber 1120 in the author’s Vacheron Constantin Malte Squelette, with ring-mounted winding weight in the foreground

Whether you think of it as the Jaeger-LeCoultre Caliber 920 (although JLC did not use it in its own watches), the landmark Vacheron Constantin Caliber 1120, or Audemars Piguet Caliber 2120, this ultra-thin self-winding movement serves as the foundation of many of the most remarkable wristwatches made.

I’m fortunate to own two watches that feature variants of the 920: a dressy Vacheron Constantin in which the base movement itself is the star in skeletonized form and the monumental Audemars Piguet Equation of Time, in which the compact Caliber 2120 base provides the motive force for an array of calendar and astronomic complications. And thin, too: Jules Audemars Equation of Time based on Caliber 2120

This is another of those movements that isn’t exactly silent; but anytime I’m aware of the rotor skimming over those tiny ruby wheels, I can’t help but smile.

So many movements, so little space

And that’s only a small subset of all of the splendid movements out there that might qualify!

For instance, I’ve left out the vintage Victorin Piguet ébauches and complications that appear in pieces like some of Kari Voutilainen’s decimal repeaters and my Patek Philippe Reference 1526 perpetual calendar as well as legends like the Zenith El Primero, a 5 Hz chronograph standard that was either the first-ever fully automatic chronograph movement or close to it and which, in modified form, also powered generations of the Rolex Daytona.

I haven’t even yet mentioned all of the notable movements that power my current collection, including the smoothly engaging and dead-reliable Frédéric Piguet/Blancpain 1185 behind the dial of my Vacheron Constantin Overseas Chronograph. And now that I’m thinking about it, how about the chameleon-like Lémania Caliber 2310 that has appeared in everything from the first Omega Moonwatch to Patek Philippe’s Reference 5950 perpetual calendar chronographs? Or the sturdy Valjoux ETA Caliber 7750 family, whose members lurk behind the dials of countless chronometer watches including one of my first pieces, the Omega Speedmaster Mk40? Powered by a legend: Omega Speedmaster Mk40 containing the Omega Caliber 1151 movement based on the Valjoux 7751

For those of you fascinated by those movements and others like them by long-lived and broadly applied “single brand” movements such as the Patek Philippe Caliber 240 micro rotor, or by foundational movements like the A. Lange & Söhne Datograph, I suspect I’ll be back roaming in this territory sometime in the future! Why I Bought It: Vacheron Constantin Malte Squelette Living Beyond Your Means As A Collector: How To Avoid Getting Hurt 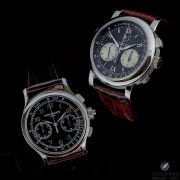