In 2015, Guinness World Records presented an unusual award at the National Maritime Museum in Greenwich (the “G” in “GMT”), England. After a 100-day testing while sealed in a clear plastic box to prevent tampering, Clock B by Martin Burgess and completed by Charles Frodsham and Co. was officially declared to be the world’s “most accurate mechanical clock with a pendulum swinging in free air. ”

Mea culpa: in the title I described John Harrison as both “the inventor of the marine chronometer and winner of the British Admiralty’s Longitude Prize.” While the first of those statements is true, the second − though widely believed to be so − isn’t.

Two hundred and fifty years ago, the British Admiralty belatedly and begrudgingly paid Harrison for revolutionizing nautical navigation and saving thousands of lives lost at sea with his H4 marine chronometer, which enabled a precise and reliable determination of longitude (east-west position) at sea.

This invention heralded precision timekeeping as offering much superior navigation at sea compared to celestial observations. But the British Admiralty never actually awarded the Longitude Prize to Harrison or anybody else for that matter: it’s believed that was to avoid paying out the full prize money.

Harrison was one of the world’s greatest horologists, but 250 years is a long time and we have advanced so far since then. Haven’t we?

In the last 250 years we have invented driverless cars, pilotless planes, widespread electricity, computers, internet, space travel, and the smartphone.

And we are continually improving in virtually all areas thanks to better materials and our understanding of those materials as well as better and more precise machines. Improvement is also largely thanks to a constantly expanded knowledge base and centuries of input from brilliant and creative minds.

Two hundred and fifty years might not be a long time on a geological scale, but it is a long time for humans; great-great-grandparent does not even get halfway.

But first there were wall clocks

John Harrison (1693-1776) is renowned for his H4 marine chronometer, but marine chronometers are far from being pure timekeepers: the first consideration for marine chronometers has to be reliability and consistency in the extremely hostile environment of a humid and salty atmosphere on a widely pitching and tossing ship subjected to a wide range of constantly varying temperatures. Precision is secondary to reliability for a marine chronometer. That isn’t the case however in a high-precision pendulum wall clock, and while it’s less known, before he started developing a marine chronometer to win the Longitude Prize, Harrison was already extremely good at developing high-precision pendulum wall clocks that only have temperature variations to contend with rather than the extreme conditions of months or years at sea.

During Harrison’s early career, George Graham (1673-1751), was widely acknowledged as the finest horologist in England. Graham was making pendulum clocks called regulators with an accuracy of one second per day. That’s the precision of a modern quartz watch, and it was very impressive in the early eighteenth century.

But as impressive as Graham’s regulators were, Harrison, who had trained as a carpenter and made his clocks largely in wood, started making timepieces that were 30 times more accurate, losing just one second per month rather than Graham’s one second per day.

But that wasn’t enough for him. In his later life, Harrison wrote a small book in which he criticized many of his colleagues and claimed that he could make a wall clock with a then-unheard-of-precision of just one second over 100 days!

Even with the reputation Harrison had, that level of accuracy seemed like sheer lunacy at the time, the rantings of a madman. There were comments by distinguished horologists in learned journals describing Harrison’s claims as “an incoherence and absurdity that was little short of the symptoms of insanity” and “. . . the ramblings of superannuated dotage.” 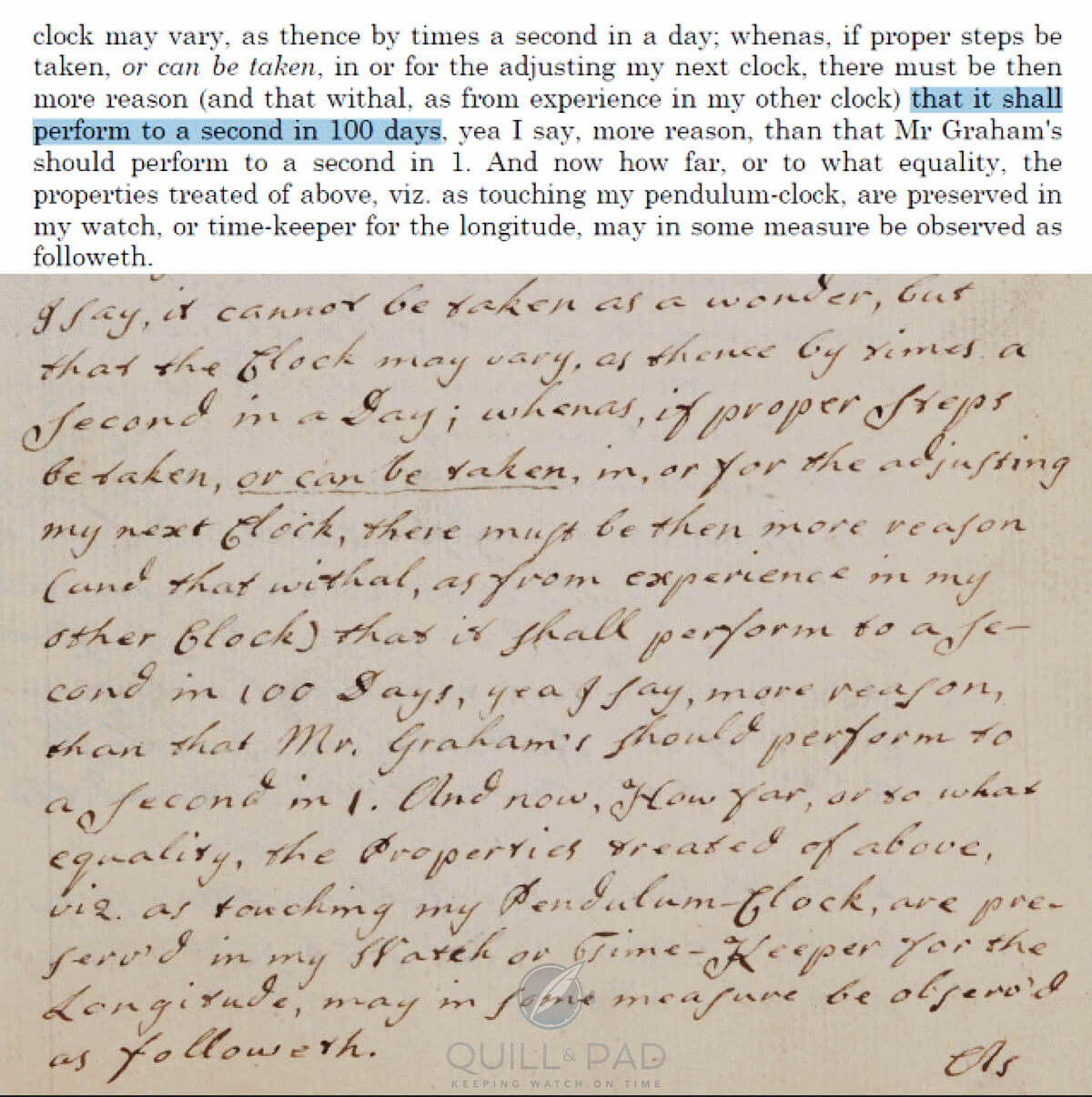 Harrison was never able to prove the naysayers wrong as while he had designed his one-second-in-100-days clock, which would have a large pendulum arc, relatively light bob, and a recoil grasshopper escapement, he never got around to making it.

In 1975, English artist and clockmaker Martin Burgess was commissioned to make a sculptural clock for Gurney’s Bank of Norwich. He took this as an opportunity to delve into John Harrison’s eighteenth-century precision clocks and made two clocks he called A and B according to the principles Harrison had laid out in his writings. 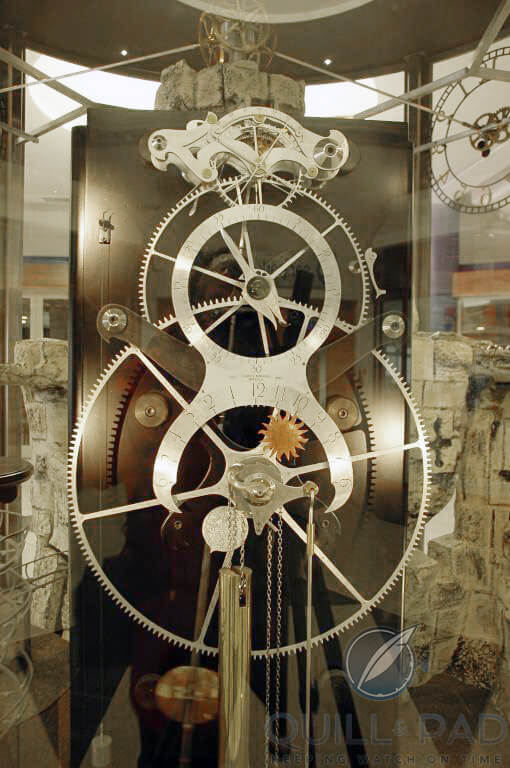 Clock A by Martin Burgess made to John Harrison’s principles on display at The Castle Mall in Norwich, England (photo courtesy Recording Archive for Public Sculpture in Norfolk & Suffolk)

Clock A was completed in 1987 (and is now on display at The Castle Mall in Norwich), but Burgess never completed Clock B, and its parts remained in his workshop for 30 years. Then in 2009 a collector bought the parts and commissioned it anew.

Ultimately the project involved a number of horologists, who formed the Harrison Research Group to look at his theories afresh. Harrison had claimed that his earlier pendulum clocks were accurate to within one second per month and that his last, unfinished clock, “. . . shall perform to a second in 100 days.”

Burgess’s two clocks were based on Harrison’s principles, but using modern materials where this was considered appropriate.

In 2009, a collector bought Burgess’s parts for Clock B and commissioned London clockmakers Charles Frodsham & Co. to complete the work. Frodsham began with intensive research into Harrison’s thinking, the lessons learnt by Burgess in making Clock A, and the wishes of the client.

To complete Clock B, Charles Frodsham & Co. under the direction of Philip Whyte and Richard Stenning consulted extensively with a team of distinguished horologists in the Harrison Research Group, which included William Andrewes, Andrew King, Donald Saff, Burgess, Mervyn Hobden, and others.

Frodsham watchmakers Roger Stevenson and Martin Dorsch as well as other team members designed and produced the missing components for Clock B and tested it extensively in 2012.

It was decided to compete the clock according to Harrison’s design and principles but using modern technology where appropriate. For instance while the clock is driven by a descending weight, the weight is automatically wound up by an electric motor.

Pendulum of the Burgess Clock B, completed by Charles Frodsham & Co.

Clock B’s gear train wheels are made of Duralumin, which run on oil-free bearings. The pinions are Harrison’s form of lantern pinions but use small ball races in place of Harrison’s lignum vitae wooden rollers.

Harrison’s regulator clocks do not require lubrication, and Burgess planned the same for Clock A and Clock B. The former has been keeping good time oil-free for near 30 years with virtually no maintenance.

Clock B is regulated by a low-friction, lubrication free Grasshopper escapement, which was invented by Harrison. The Burgess Clock B features a Grasshopper escapement (pictured here in an unfinished state), which is a John Harrison invention

The escape wheel is driven directly by a remontoir, which is a coiled spring that rewinds every 30 seconds. This isolates the escapement from variations in torque from the gear train and ensures that the recoil of the escape wheel just rewinds the remontoir spring rather than the whole gear train. The Burgess Clock B, completed by Charles Frodsham & Co.

Building on lessons learnt by Burgess, for Clock B Frodsham made a new pallet arbor resting on sapphire pads and used low friction PEEK for the pallets and composer bearings. The cycloidal suspension cheeks are a very important part of Harrison’s regulator theory, and these were precision milled from large brass blocks bolted to the massive 90-kilogram steel back plate. Much more work was required to complete the drive to the hands, the dials, and the hour, minute and second hands; the aesthetics were carefully agreed with the clock’s owner. Hour display with sun hand on the Burgess Clock B, completed by Charles Frodsham & Co.

When finished, after initial adjustments and regulation, Clock B was found to be capable of keeping an extremely good and stable rate. In fact, the precision of this 250-year-old design was so good that it was decided to have the clock independently tested by the Royal Observatory in Greenwich.

After being tested for 100 days in a tamper-proof case, Clock B had lost just 0.625 seconds: that’s just over half a second in more than three months of varying temperature, humidity, and air pressure!

Not only did Clock B vindicate Harrison’s theories, design, and genius, it set a new world-record level of accuracy for pendulum clocks in free air and was officially declared by Guinness World Records to be the world’s “most accurate mechanical clock with a pendulum swinging in free air.” Second hand at the top of the Burgess Clock B, completed by Charles Frodsham & Co. The Life And Times Of Legendary Independent Watchmaker Derek Pratt