Quartz: Past, Present, But No Future?

Nothing can stir up the watch world these days quite as much the launch of a new Apple watch.

Responses vary between placing an immediate order for one because it’s the latest must-have gadget to shrugging it off indifferently, “because it is not a watch.”

The smartwatch onslaught is a moment in time when the horological industry has taken to making a lot of references to that other calamitous moment (for mechanical movements) in history when the quartz watch was introduced. Back then, quartz watches took the world by storm, nearly destroying Swiss watchmaking in the process.

The evolution of Swiss quartz watches

There is one, big difference between the haute horlogerie industry’s reactions to the two potentially fatal events: while most traditional Swiss brands today have largely ignored the smartwatch, few brands ignored quartz.

Creating increasingly precise watches had been the collective aim of watchmakers long before Abraham-Louis Breguet had even thought about the tourbillon. At quartz’s time of development more than 50 years ago, quartz-regulated watches were just seen as a way of achieving a higher degree of precision. Electric watches and the famous Accutron with its tuning fork movement had already shown that there was great potential in embracing this technology. That didn’t mean that it wasn’t outside of the comfort zone of many manufacturers, 16 of which decided to join forces with Ebauches SA (a movement maker) to form Centre Electronique Horloger laboratories (CEH) in 1962. Based in Neuchâtel, it formed one-third of the beginnings of today’s CSEM. CEH was an attempt to at least keep up with all the research and development into electronic regulators in both the U.S. (the United States still had a sizable watch industry in those days) and Japan.

The result of these Swiss collaborative efforts was the Beta 21, the first prototypes of which were first shown in 1967. It was commercially introduced in 1970, just after Seiko launched its first quartz watch, the Astron.

High-end watch companies thought that high-precision quartz regulators would feature in exclusive, beautifully finished movements that they could sell at a premium over mechanical movements, while the Japanese worked rather quickly to set up efficient production of low-priced quartz movements, allowing them to undercut the expensive Swiss watches.

It also didn’t help that the Beta 21 drove the design departments of many esteemed Swiss manufactures mad! Rolex decided to forgo its signature Oyster case; Omega adopted a brick-like design for its watches housing the ungainly quartz movement; and Piaget made a stepped case with so many steps that it looked like it was attempting to reach heaven. Jaeger-LeCoultre never used the Beta 21 in a production watch, opting instead for the movement that Girard-Perregaux developed together with Motorola – not that this movement wasn’t any less chunky.

As quartz technology further developed, the Swiss were able to integrate it better and better into their collections.

After the Beta 21, Omega created an impressive range of quartz watches with interesting variations that even included the very first quartz watch to ever be awarded chronometer status (by Neuchâtel’s observatory, by the way); it is still considered one of the most accurate non thermo-compensated production watches ever made.

Girard-Perregaux developed some interesting complications for its quartz watches, and even Piaget became a full-blown manufacturer of quartz movements, making them smaller and thinner so they could be more easily integrated into the brand’s elegant watches.

Due to the renaissance of mechanical movements in the late 1980s and 1990s, quartz movements are now largely frowned upon by watch connoisseurs. Yet they have earned their place. The Swatch watch arrived in 1983 and changed everything again

Swatch gets the credit for successfully reclaiming quartz for the Swiss by beating the Japanese at their own game: Swatch reduced the number of parts inside the quartz movement, thereby optimizing production, and put the movements in sharply designed, seasonal collections often sporting unique, if not outrageous, themes and selling the watches at very modest prices. Over the years Breitling created several models that have became industry evergreens, among them the Aerospace and the Emergency, the latter even coming with its very own emergency beacon the wearer can pull out of the case in emergency situations. Even François-Paul Journe, often and rightfully lauded as one of the best watchmakers alive, has created his own quartz movement; the quartz oscillator is nestled within his signature solid pink gold bridges (see Quartz Crush: F.P. Journe Élégante 48mm). Another notable Swiss haute horlogerie quartz watch is Girard-Perregaux’s 2010 re-edition of the original quartz Laureato model issued in honor of the brand’s fortieth anniversary of GP quartz and 35 years of the Laureato line at the same time. It contained a very finely finished Girard-Perregaux-manufacture quartz movement. 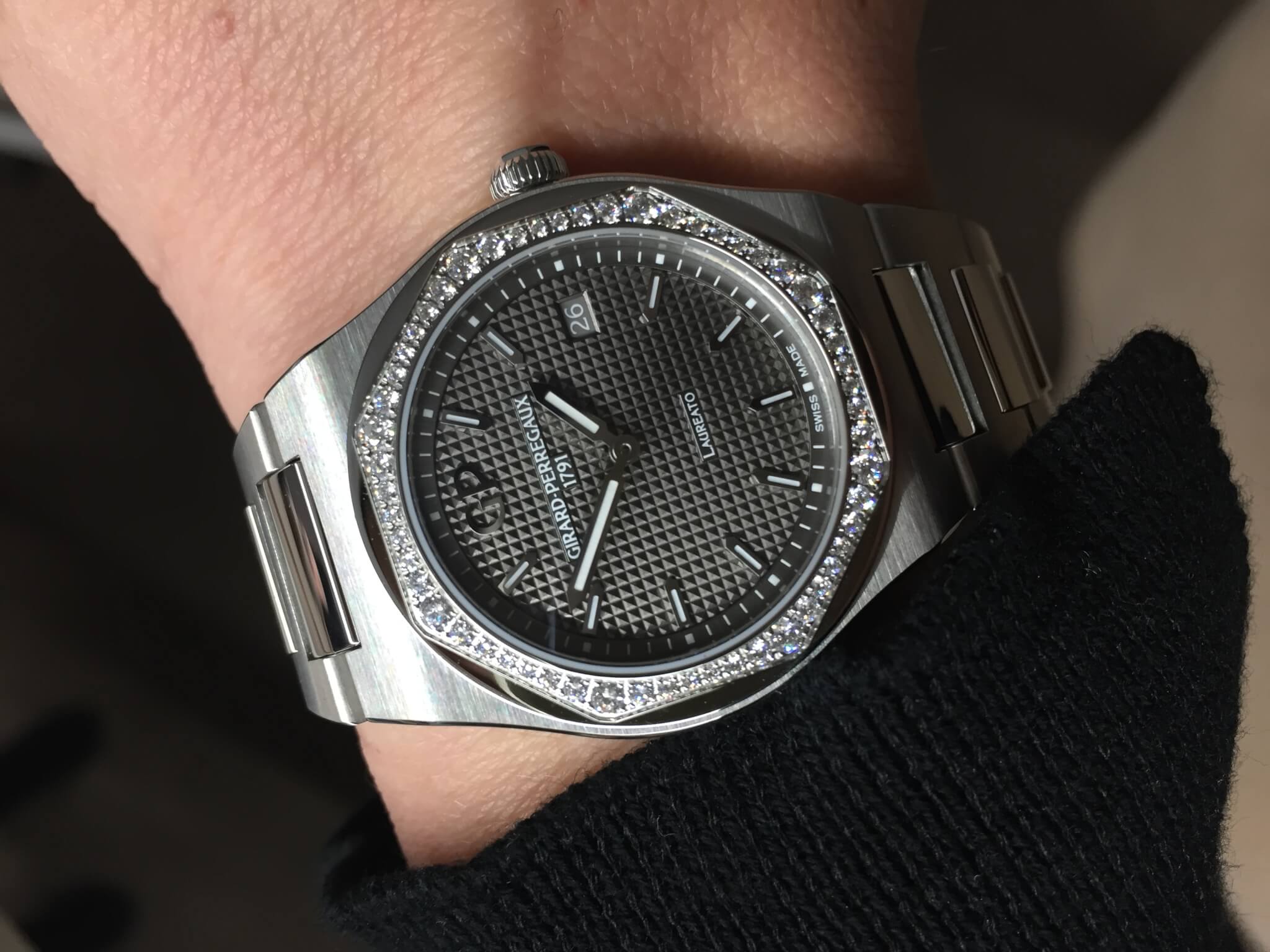 A 2017 Girard-Perregaux Laureato 34 for women with a diamond-set bezel and a mechanical movement; the quartz is gone from the Laureato for the time being

The first Laureato was powered by Caliber 705, a modified version of the Girard-Perregaux 350 quartz movement developed in 1971. Caliber 705 represented a bridge between the quasi-experimental Beta 21 and the ensuing Swiss quartz. By 1975, Girard-Perregaux’s team had refined the brand’s in-house quartz movement so that it was thinner and more efficient. It was also certified as a chronometer. But perhaps most importantly, its frequency of 32,768 Hz has remained the universal gold standard ever since.

The future of quartz – or lack thereof

In a twist of irony seeing as quartz once almost sealed the fate of the mechanical movement, it now might be the smartwatch that kills the quartz watch as its first victim.

While the mechanical watch might not be as accurate as electronic quartz or the smartwatch, it claims an emotional bond based on traditional skills and crafts as well as the complexity of its movement.

Largely thanks to the advent of quartz movements, mechanical watches have become a form of luxury and even are even considered art. Apart from Journe’s Élégante creation, it is highly unlikely that the common quartz watch would experience the same destiny. As more and more brands adopt the concept of the smartwatch, the quartz watch loses it edge – as happened with the electric watch and the Accutron before it. It might stand on equal footing in terms of precision, but it cannot compete with the vast array of additional functions that any smartwatch can offer.

The common quartz watch is likely to be outgunned and, especially as prices of smartwatches come down: for quartz watches, I predict a classic case of the hunter becoming the hunted.