As the resident gentleman of Quill & Pad, I feel that the time is soon approaching to write an obituary announcing the death of the dress watch.

It is not that we didn’t see this coming, nor is it an isolated event. But it still hurts.

What was long the cornerstone of the watch industry is no longer a hotly desired model. The dress watch has been overtaken, surpassed, and in some cases even downright forgotten as new generations splurge on steel-encased icons, the latest Apple watch, or forgo a watch all together.

As the downturn of the watch industry marches on, the dress watch, once a proud general leading the troops, is now becoming the first casualty. The dress watch itself has always been somewhat of a contradiction, one that thrived on overstating its understatement. Although encased in gold – preferably yellow – it had to look sober, have two hands (three at most), and be thin and mechanical as well as small in diameter.

Bracelets? Sorry, they are frowned upon, so a dark-colored leather strap it was: calfskin is okay, but alligator is preferred.

The result is a surprisingly simple-looking watch, which stands in sharp contrast to the considerable effort and craftsmanship needed to create it, not to mention the financial investment required to wear one.

Despite (or maybe because of) their understated appearances, some dress watches haven’t gone unnoticed and have become icons. Two of them are celebrating important anniversaries this year: the Piaget Altiplano turns 60 and the Cartier Tank celebrates its centennial. 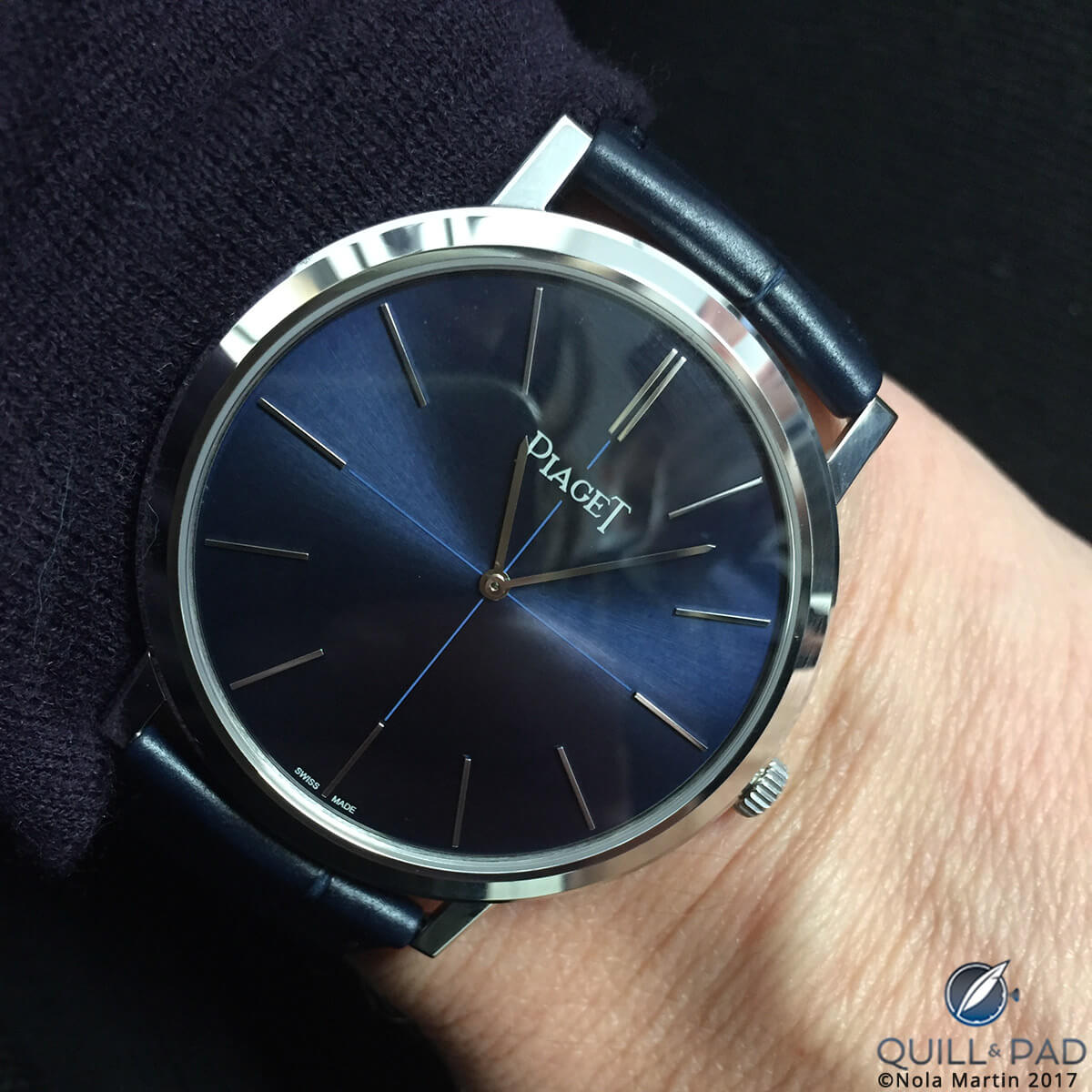 While these watches are still highly respected within the tight-knit community of watch connoisseurs, they are not being bought – at least in sufficient quantities – to command the prominent position they once had.

Gold-cased watches, in general, are far less popular than they once were. Steel is now considered equally noble, bronze has gained a loyal following, and ceramic and carbon fiber are the next big thing. This has hurt especially the watch manufactures that specialize in exquisite gold dress watches such as Piaget and Vacheron Constantin.

But even other brands seeming to do just fine face challenges when selling their dress watches.

When you say the words “Audemars Piguet,” everyone instantly thinks “Royal Oak.” Few bring up the Millenary, but how many know of the Jules Audemars collection, which contains several exceptional dress watches?

At Patek Philippe, even the mighty Calatrava has been eclipsed by the ongoing success of the Nautilus. Here the brand’s famous tagline – that you merely look after it for the next generation – might even work as a disadvantage as possible clients may wait to receive one of Patek Philippe’s dress watches as an inheritance rather than purchase one of their own. Perhaps I’m putting this a bit bluntly, but why invest in something you would only wear occasionally if at all?

Has the dress watch drifted out of fashion?

The cause of death for the dress watch is a complex one, but can mostly be described as becoming out of sync with modern-day style.

Or should we say that modern-day style has gotten more out of sync with the dress watch?

Comfortable clothing reigns in most closets, and events for which we once dressed up we now dress down. This is not the atmosphere in which a dress watch is at its best.

But there is one big “c” in fashion that puts a long nail in the coffin of the dress watch, and that is the c in “connected.” Professional life was often where the dress watch was in its natural habitat. Here technology is taking over, and many professionals now prefer an Apple Watch or another connected device on the wrist real estate where once the dress watch proudly resided.

It helps professionals stay on top of things, or at least that is what they tell themselves.

In this ever more connected world, I find peace in a watch with no visible motion as I glance at it. The hands move, of course, but I am not haunted by them as they set the pace of the rat race that we make out of life. This is yet another contradiction toward the demise of the dress watch, as many of us need to certainly have achieved some favorable results in that rat race in order to be able to afford to buy one of them.

Is there any hope for survival for the dress watch?

While it’s on life support, I doubt the dress watch will fully cease to exist as I expect it to become a niche.

Pocket watches went down the same road dress watches are heading down now, yet they are still being made in smaller numbers for an appreciative group of dedicated enthusiasts.

Manufactures that now greatly depend on dress watches will need to find a new direction for their collections as clients for their dress watches are just not as plentiful as they once were. The status of the Cartier Tank and the Piaget Altiplano will ensure to some extent that they remain in production as icons of the industry.

That is at least some good news because as resident gentleman of Quill & Pad, and an avid collector of dress watches, this is one obituary I hope never to write.