My 5 Favorite Supercars (And A Superwatch) At The 2018 Geneva Motor Show, From Koenigsegg, Hennessey, McLaren, Pagani And Pininfarina

For someone used to walking around watch fairs, a first view of the halls inside the Palexpo for the Geneva Motor Show can seem daunting in their lack of walls and plethora of unfamiliar booths.

However, getting my bearings wasn’t quite as hard once I oriented myself by imagining the SIHH, which is held in some of these same exhibition halls.

And once oriented, I headed straight for the supercar booths. This is the end of automobile creation where I believe design and technology hit the cutting edge the hardest.

And these are just the prettiest cars in my opinion (practicality be gone). Here are five of my favorite supercars from the 2018 Geneva Motor Show.

When our Martin Green wrote about the Venom 5 back in January 2018 in Hennessey Venom F5: The Power Of The Underdog, I knew I had to have a look at this beast for myself. So that is the first place I headed once inside the Motor Show, where it made its worldwide debut. This sleek yellow body not based on any other car is nothing short of astounding, even when it is not in motion. In motion, it’s certain to be a thing of visceral beauty as founder and CEO John Hennessey created it to become the fastest car on the planet. But I can only dream of seeing that one day. The hybrid Regera is different from Koenigsegg’s previous supercars in that it is specifically designed to be a luxury car, which it does by integrating a new power train technology called Koenigsegg Direct Drive that allows the removal of the gearbox. Koenigsegg assures its customers that this luxurious automobile is the most powerful electrical motor setup in history. Earlier Koenigsegg cars were designed with ultra-high speed in mind, so of course the Regera – whose name is Swedish for “to reign” – is fast, but it additionally thinks of comfort. One great example of that is that it can also be driven in absolute silence (though why you would ever want that is far beyond me).

Despite all of its power and lovely hybrid technology, perhaps my favorite element of this car is the brand’s new Constellation DRL system, an effect achieved by scattering LEDs around the headlight lamps. The result looks like twinkling stars or shiny diamonds (as you wish to interpret). Also, the rear wing is the world’s first foldable spoiler of its kind and the targa top is a real plus to keep the design pure.

Coming off a record year in 2017, Modena-based Pagani brought two supercars to the Geneva Motor Show, one of which was a U.S.-spec Huayra Roadster. There is hardly anything more spectacular than Pagani at its best on a design level, and this monocoque carbon fiber-titanium creation imagined by Horacio Pagani is no exception. Pagani had it out on display with all doors, trunk, and hood open and the top off, exposing the interior for all to see. In combination with its unusual side mirrors, the car did somewhat resemble a ladybug with its wings poised for flight. But that only added to its charm – even though the four rear exhaust pipes more than hinted at its speed.

Pininfarina’s goal with the H2 Speed was for it to become the first race car powered by hydrogen: starting life in 2016 as a concept car, it has now become a zero-emissions race car. At the 2018 Geneva Motor Show, Pininfarina showed the running model slated for production in a small Pininfarina-branded series of 12 cars after having won Concept Car of the Year and Best Concept at the 2016 edition of this fair. The Senna GTR Concept is both a track version of the latest Ultimate Series model and it introduces the first watch with partner Richard Mille, who created a special version of the RM 11-03 McLaren Automatic Flyback Chronograph in similar colors – primarily the car brand’s signature orange – to go along with it. 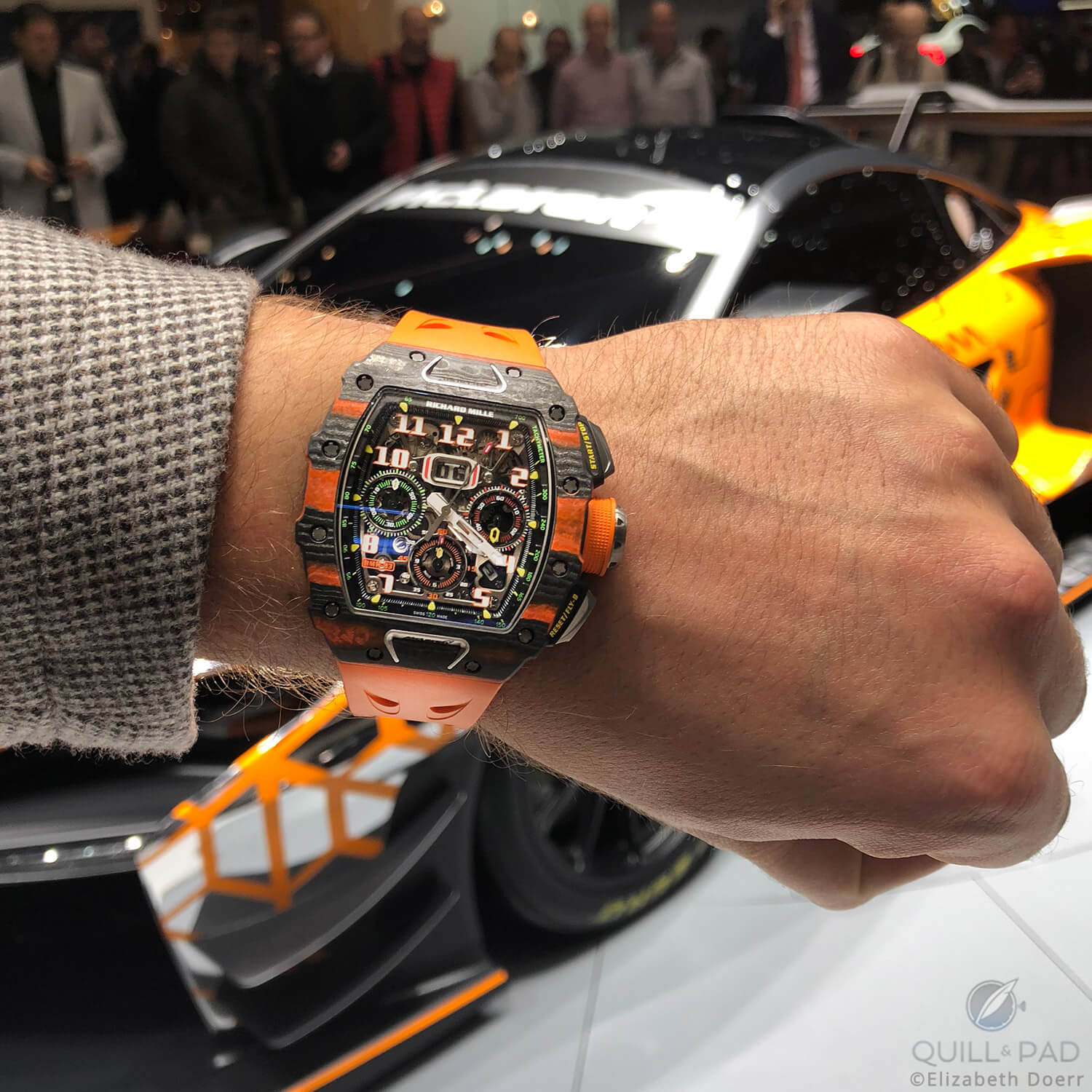 Buyers of the Senna GTR Concept have first crack at ordering the watch limited to 500 pieces and costing 180,000 Swiss francs (see Richard Mille And McLaren: New RM 11-03 Timepiece Celebrates This Match Made In (Car) Heaven). This is the fastest McLaren car available outside of a Formula 1 model, though precise details on its speed and acceleration are due to be released later.