It is a claim that not many watch models can make: the Cartier Tonneau can look back on 113 (!) years of history since its introduction.

And one of the most beautiful things about Cartier is that once it had created this perfect watch, the designers pretty much left it alone. Meaning that the whims of fashion could not get a hold on models like the Tonneau – for the simple reason that it transcended fashion. 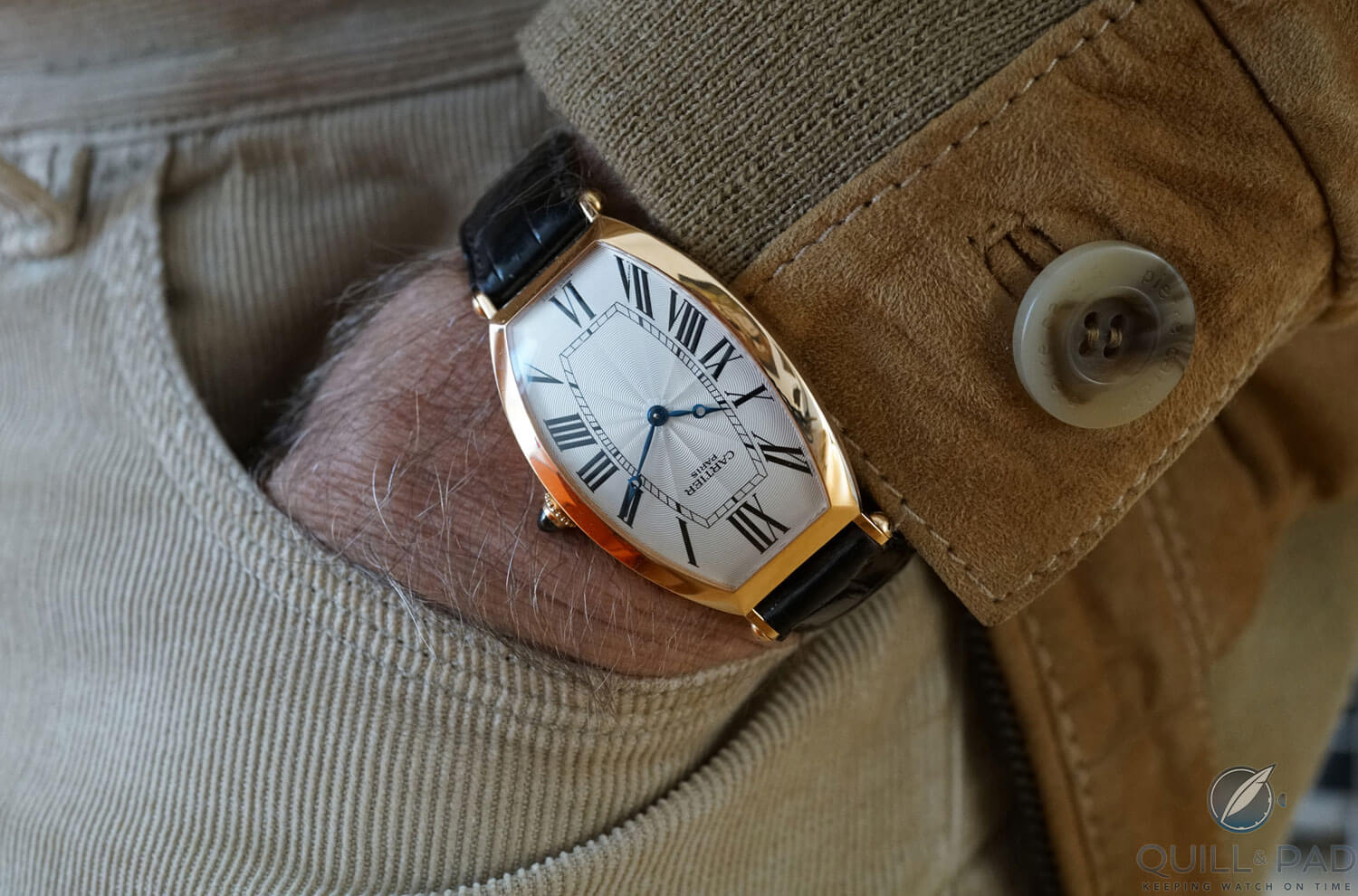 The Tonneau, like many of the early Tanks, was one of those unique creations on which time had no quarter. It was a powerful design once created, and it had no problems with perpetuation across the changing eras.

The beautiful photograph of Igor Stravinsky from 1949 above testifies to this fact: the Russian composer is sitting in a garden wearing a short-sleeved shirt and a prominent Cartier Tonneau – a watch that had by that point already been on the market for 43 years.

However, the Tonneau never really enjoyed mainstream success: although Cartier was well known around the world when it was still family owned, it was not a mainstream brand. This changed when a Robert Hocq-led syndicate bought the family firm in the 1970s and laid the groundwork for the luxury behemoth that Cartier has become today. While other historic designs by Cartier achieved superstar status, the Tonneau remained the watch for connoisseurs in the know. Its availability wasn’t so much an issue as it has always been part of the collection either as a special-order watch or, later on, as part of the coveted Collection Privée Cartier Paris (see The Rise And Fall Of Fine Watchmaking At Cartier: It’s Been Surprisingly Complicated for info on that line).

The fact that Cartier only made it in precious metals played probably a modest role in its limited popularity as this meant a significant investment to add one to a collection. The bigger issue was probably its elegant appearance, which included a rather narrow strap even in later versions.

Men are strange creatures sometimes; many feel that their manhood is put in question when the products they wear are not profoundly masculine. While this fact may have prevented growth in popularity for the Tonneau, it didn’t stop Cartier from continuing to make it for those men who do understand its charm and are perhaps a bit more secure in their masculinity.

Anno 2019 sees things slowly changing: elegance is no longer a dirty word among a growing group of men. And for Cartier that is a good enough reason to put the Tonneau back into the limelight in two different models, each available in two precious metal varieties.

Before I get to them, there is another significant collection change that I need to mention: with these watches the French jewelry giant is also launching something called Cartier Privé. Although not explicitly explained, I expect that this will be the new label under which Cartier will (re-)introduce historic models as well as more complicated versions of them.

This is not a reinstatement of Collection Privée Cartier Paris (CPCP), nor is it a full departure of the Fine Watch Making Collection, but more a merger of the two.

With the two new Tonneau Large models, not much changes compared to the original of 1906: the size is slightly different, but the proportions have remained the same. With a tonneau-shaped case, numbers don’t say much about how it will look and feel on the wrist as this shape – especially such a slender variation – wears so differently from a round or even a rectangular watch.

Its length of 46.1 mm sounds enormous, while its width of 26.2 mm (measured at the center, excluding crown) is more petite. In real life, these dimensions give you a watch with significant wrist presence without being overbearing. And it wears very comfortably. This is not in the least because of the modest thickness of the watch: at 8.8 mm, it is on point for what you would expect from an elegant watch. The new Tonneau models are powered by manual-wind Caliber 1917 MC, which Cartier introduced in 2018 in the Louis Cartier Tank and which is manufactured at the brand’s La Chaux-de-Fonds location. This movement measures 16 x 12.9 mm and is a perfect fit for the shaped case of the Tonneau.

As it is only 2.9 mm in height, you might think that Cartier added quite a bit of height to craft a watch around it. However, you need to take into consideration that the back of the Tonneau is curved to follow the shape of the wrist. This is also what gives this watch such tremendous appeal because it means that the sapphire crystal and the dial have to be curved as well. So what has changed on the 2019 version? Mainly – and significantly – the dial: while Cartier has done versions without a guilloche pattern in the past, the applied Roman numerals are new to the large model, adding an extra layer of depth that, especially with the sunburst-brushed dial, is quite attractive.

With the Breguet-styled hands Cartier goes back to the early days of this model, as later versions often featured sword-shaped hands. The brand offers the new Tonneau in platinum with a silver dial and ruby cabochon in the crown as a limited edition of 100 pieces, while the pink gold version is unlimited and features a champagne-colored dial with the traditional blue sapphire cabochon.

The skeleton in Cartier’s closet: the Fine Watch Making Collection

While the Fine Watch Making Collection might not have brought Cartier what it hoped for, not all has been lost. In fact, it has established Cartier as an expert in a field that a lot of other haute horlogerie brands have more or less neglected: skeletonized movements. With the new Tonneau XL Skeleton Dual Time Cartier has, in my modest opinion, introduced its best skeleton watch to date!

This watch is inspired by the Tonneau Dual Time from the 1990s; the biggest difference not only being that that watch featured a dial with a guilloche pattern, but also that it incorporated separate movements for each of the two time zones displayed. The new Tonneau XL Skeleton Dual Time only needs one movement to achieve this, although it is fitted with two crowns so that the wearer can conveniently set each time zone separately. It is powered by manufacture Caliber 9919 MC, which on top of its complication and extensive skeletonization, has a power reserve of 60 hours achieved by a straight-line gear train.

This all results in a watch that is delightfully Cartier, technically quite advanced, and overall very sexy! Cartier Caliber 9919 MC front and back

The movement seems to be hardly there; the design is so pleasing for the eye that there is not a detail out of place. This watch also illustrates the power that a movement that is especially created for a shaped case can have. That it is used it in a skeleton watch only increases its impact.

The Tonneau XL Skeleton Dual Time also confirms the path on which Cartier is currently traveling. While I love the brand dearly, I am not so deluded in my passion that I don’t recognize that not everything the brand has made over the years is a stroke of genius. There have been times when I thought that Cartier has been a bit lost. With these two Tonneau models, “La Maison” has confirmed that it is back on track, with one of these watches continuing the legacy begun by the Cartier brothers and the other firmly establishing Cartier as a mechanical mastermind with focus on what complications it does best.

And both are set to fuel a renaissance of the age of elegance!