When a high-end watch brand hits a major milestone, like 25 years since the re-launch of the marque, one might expect a groundbreaking work of horological extravagance to mark the occasion.

Or, perhaps the more logical path would be to honor the very watches that brought the brand where it is today.

A. Lange & Söhne chose this latter path. And as 2019 marks the twenty-fifth anniversary of both its rebirth and the introduction of its most famous watch – one that can be called iconic in the truest sense of the word – the brand has created a commemorative Lange 1 25th Anniversary watch limited to 250 pieces. And like the original Lange 1, it is a stunning piece of German watchmaking.

A. Lange & Söhne: a reason to celebrate

The jubilee celebration for A. Lange & Söhne is a bit more than just an anniversary since the brand enjoyed a venerated past before the onset of World War II. During the war, the family-owned business’s main production facility was bombed and destroyed, crippling it and making the future uncertain.

After the war, the watch companies now located in East Germany – the Soviet zone – were expropriated by the German Democratic Republic’s government and turned into one large combine; the brand ceased to exist as such.

Walter Lange, co-founder of modern A. Lange & Söhne, had just finished his watchmaker studies when this occurred and had to wait more than 50 years to see his dream of re-building his family’s company become a reality.

After the fall of the Berlin wall in 1989, Walter Lange and his business partner Günter Blümlein set to work: in 1994, A. Lange & Söhne was reborn with four wristwatch models, including the Arkade, Saxonia, Tourbillon Pour le Mérite, and the reason we are all here today, the Lange 1.

While these models quickly proved that A. Lange & Söhne was the cream of the crop, the Lange 1 stood out among its peers as it was the only relatively non-standard watch, featuring a visually striking large date and asymmetrical dial, which was unusual (read: unheard of) for the day.

The Saxonia and Arkade were more fitting with the styling of the day, yet the Lange 1 quickly became the soul of the brand. What’s more, the reaction to such impressive mechanics and finishing, at a time when that was still not exactly a priority across the industry, cemented A. Lange & Söhne’s entry into the upper echelon of watchmakers.

Three of the four models from 1994 still exist within the collection; the Arkade, the lone ladies’ watch of the debut collection, has been retired. And since the Lange 1 has come to signify the brand’s commitment to excellence and unusual visuals, it is the first to receive a celebratory 25th anniversary edition.

The Lange 1 was designed so well that in 25 years it has remained largely unchanged. A new movement was added in 2015 to incorporate technical advances and expertise the brand had developed over the prior 21 years, but the visible face of the Lange 1 is like a carving on the face a mountain: it’s not changing anytime soon.

The newer manually wound Caliber L121.1 includes a re-engineered, precisely jumping large date to eliminate the “creeping” date change of the previous L901.0 caliber and a larger free-sprung balance with weights instead of screws (among other technical changes).

But perhaps the biggest change is that the movement was not just upgraded but completely redesigned from the ground up with an entirely new layout and different gear train, with the balance on the opposite side of the movement. That makes for a rather different look from the rear, but one that still maintains all the incredible craftsmanship and beauty of the original. The design of the case and dial was slightly changed in 2015 as well with a smaller bezel and slightly tweaked typography, but that was largely it. Outside of other model versions that necessitated visual changes, the basic Lange 1 was made in its final form from pretty much the beginning.

The Lange 1 25th Anniversary probably sees the most aesthetic changes to the basic Lange 1 since its creation.

Firstly, the dial markers, numerals, and text are all printed in this latest iteration, a stark difference from applied numerals for the main dial on the original. This detail makes it feel a bit more modern compared to the predecessor, especially when combined with the deep-blue hue used for all the printing. A close look at the dial of the A. Lange & Söhne Lange 1 25th Anniversary Edition

This blue matches the blued steel hands nearly perfectly and even extends to the large date, which features blue numerals as well. The only other color on the dial comes from two very small red triangles on the power reserve indicator to signify the watch is running low and needs winding.

The other major change from the original is that the new dial features offset, slightly recessed sections that somewhat resemble other Lange 1 variations that have featured guilloche, though these recesses are unique to this model. 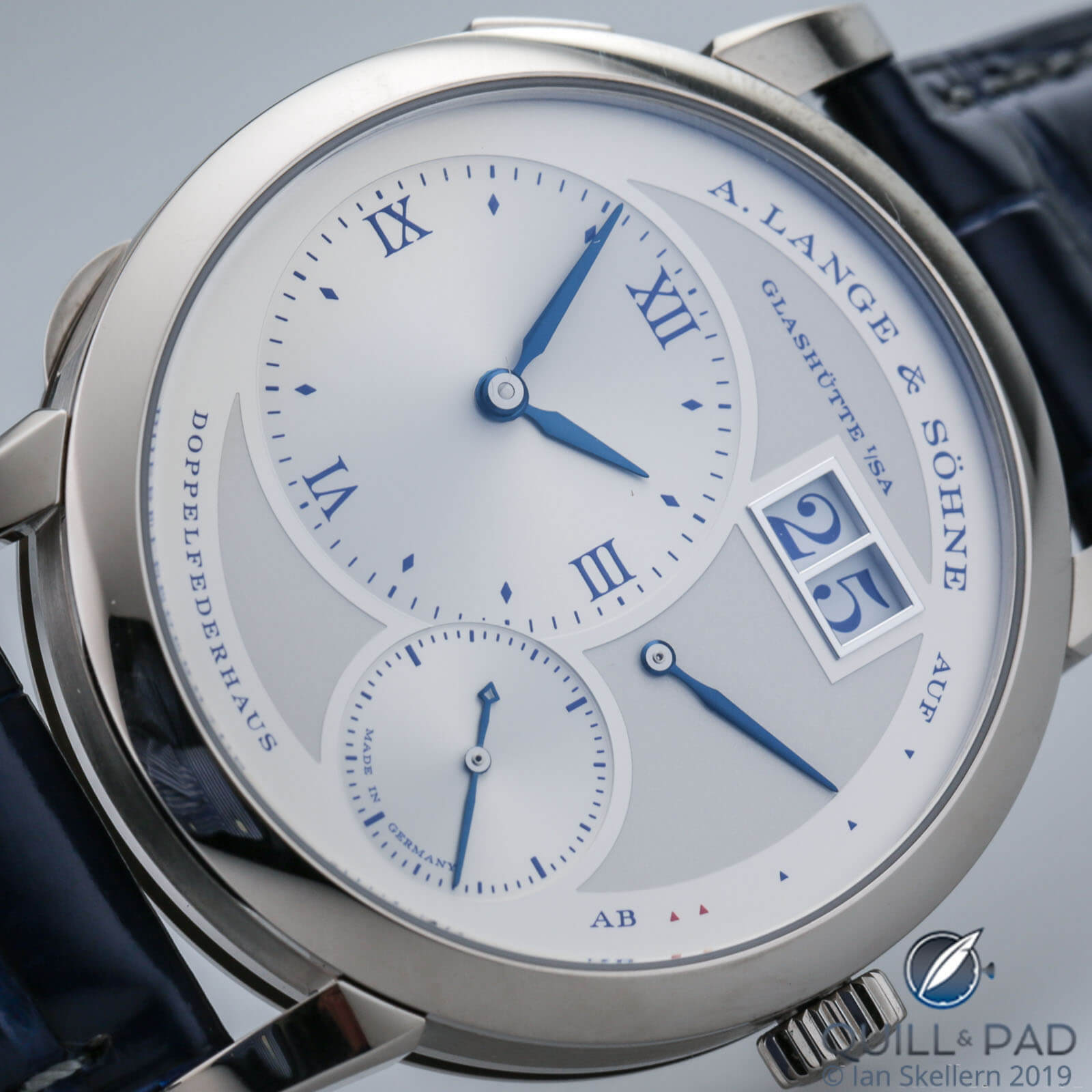 Dial of the A. Lange & Söhne Lange 1 25th Anniversary Edition

The recesses make visual outlines that highlight the dials and large date, creating just a bit more visual interest. The difference in finish between the raised sections and the recessed silvered sections help define the shapes even more.

It may seem like a small change, but when something was designed so incredibly well the first time, any change marks a departure.

The final change from the original is the location of “Made in Germany” from underneath the main dial to inside the seconds subdial. This was probably necessitated by the addition of the recesses, which would encroach on the area the words were previously printed. And, as we know, A. Lange & Söhne is no slouch when it comes to considering proportion and spacing.

I personally like the new location as it feels a bit more cohesive than outside the main dial, but we shall see if it remains in this position on any other future Lange 1.

As I stated before, the movement powering this watch is the updated L121.1 first seen in 2015, and it bears no real difference mechanically or aesthetically. It still includes the twin spring barrels delivering 72 hours of power reserve (with the second hand stopping at “60” when it runs out of energy) and a vast three-quarter plate with eight screw-mounted gold chatons, all finished to masterful levels. 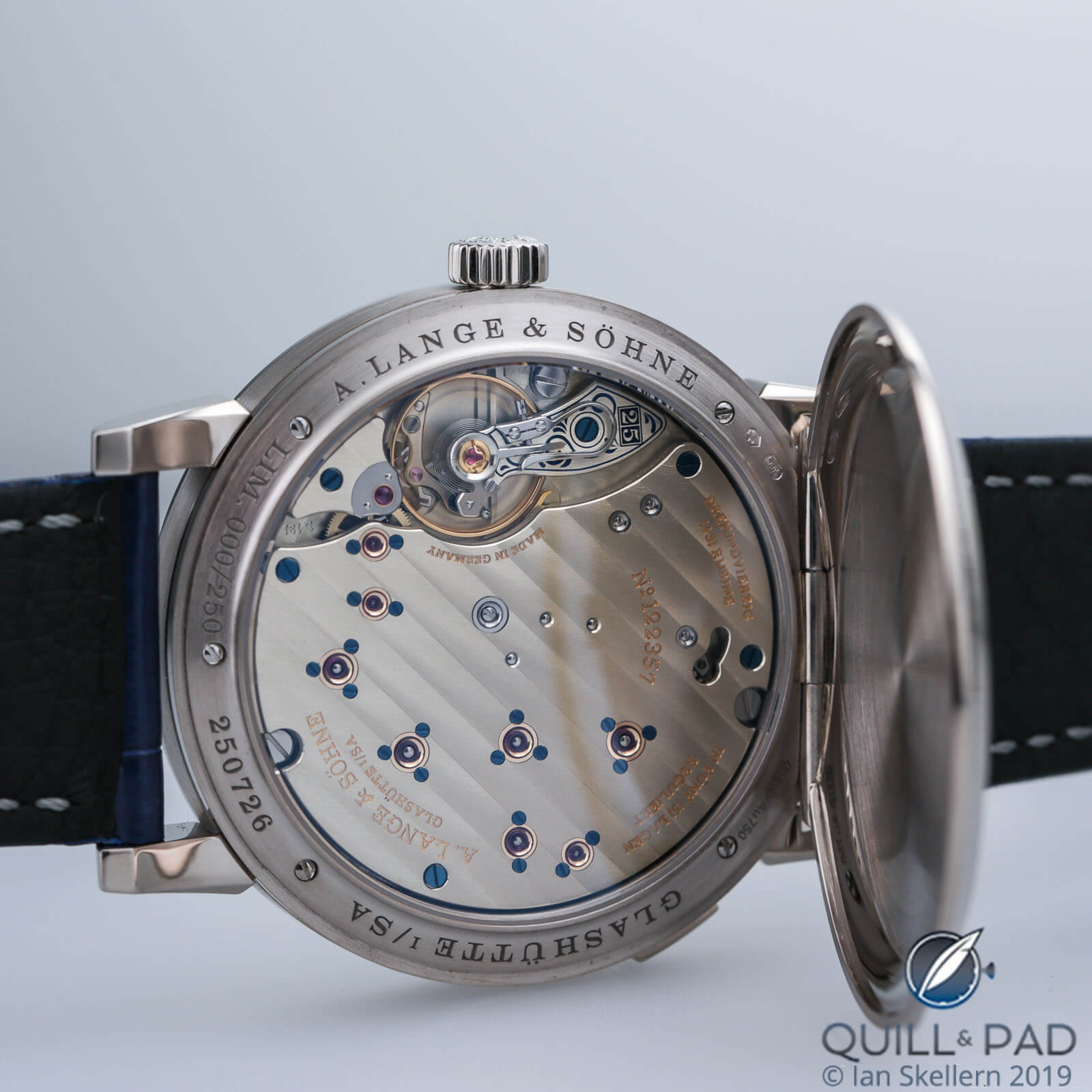 It should look the same as a Lange 1 from the last few years except the balance cock, which is always the most glorious aspect of a Lange watch already.

In the Lange 1 25th Anniversary, the balance cock features a unique engraving that incorporates the shape of the large date display showing the number 25. This number serves dual purposes here: to celebrate 25 years since the Lange 1 launch and to reminisce the day it was introduced to the public in 1994, which was October 24. But the large posters decorating the room at the Dresden Castle and the press photos showed the watch with the number 25 in the date display, accurately anticipating them being shown in the newspaper the next day.

On top of that, the engraving is filled with the same deep blue from the dial to continue the theme throughout the watch.

This engraving change is surprising and an interesting way to add a special touch to the movement signifying it as part of the anniversary edition. Like A. Lange & Söhne itself, it is understated and classy, yet just unique enough to make the piece stand out. If that was the main special detail on the rear, it would be a nice touch, but A. Lange & Söhne of course doesn’t stop at one.

The Lange 1 25th Anniversary edition features a secondary hinged case back that opens to expose the standard case back and sapphire crystal.

This secondary case back – also called an officer’s case back – features a very detailed engraving of the A. Lange & Söhne headquarters dating back to 1873, the names of co-founders Walter Lange and Günter Blümlein, and the title “25 Years Lange 1” in German (“25 Jahre Lange 1”). Engraved back cover of the A. Lange & Söhne Lange 1 25th Anniversary Edition

The case back, like the case, is solid white gold and snaps securely shut on the screwed case back beneath.

A. Lange & Söhne calls this hinged case back a cuvette, which historically was the secondary case back inside the outer case back on a pocket watch that covered the movement and would often bear makers’ marks or an engraving.

This use seems intended to remind us just where watchmaking once was, where A. Lange & Söhne has its roots, and the idea that history is worth preserving. A. Lange & Söhne Lange 1 25th Anniversary Edition on the wrist

The new Lange 1 kicks off a series of celebratory special editions in honor of the anniversary and does a wonderful job at it. The dedication of the brand to keeping the aesthetics accurate to the beginnings but bending them a little for a fun (and dare I say, stunningly beautiful) new version is why A. Lange & Söhne has been one of the top manufactures for all this time.

I think this watch would make Walter Lange and Günter Blümlein proud to see that the brand is still going strong and that after 25 years it doesn’t show signs of slowing down. And I look forward to the upcoming models that commemorate this anniversary, knowing they will likely all share the same incredible color scheme and I’m sure some other details.

Why The A. Lange & Söhne Tourbillon Pour le Mérite Is One Of The Most Historically Important Modern Wristwatches