A Cartier watch that has always fascinated me is the Ceinture.

I enjoy many of the models that this Parisian stalwart created in its early years. The fact that Cartier re-releases and updates most of its historic designs is one of the reasons I think Cartier is such a durably attractive brand. Some of the smaller Ceinture models were equipped with quartz movements, but most of them were powered by hand-wound Caliber 78.1. The large 31 mm version housed an automatic ETA movement.

At that time yellow gold was the primary alloy used in the Cartier collection, and that was also true for the Ceinture line. But white gold cases were available in small numbers as well as some two-tone pieces combining yellow and white gold. In 1975 a platinum version with mechanical caliber, red numerals, and a 25 x 25 mm case arrived.

When Cartier launched Collection Privée Cartier Paris in 1998, a line that was based on updated historical models powered by top-notch mechanical calibers, I was convinced that the Ceinture would be included. After all, most of the watches from the early years – such as the Santos-Dumont, Tank Louis Cartier, Tank Chinoise, Tank Cintrée, Tank Etanche, Tonneau, Cloche, and Tortue – were all present in this prestigious line and sometimes even in different versions. 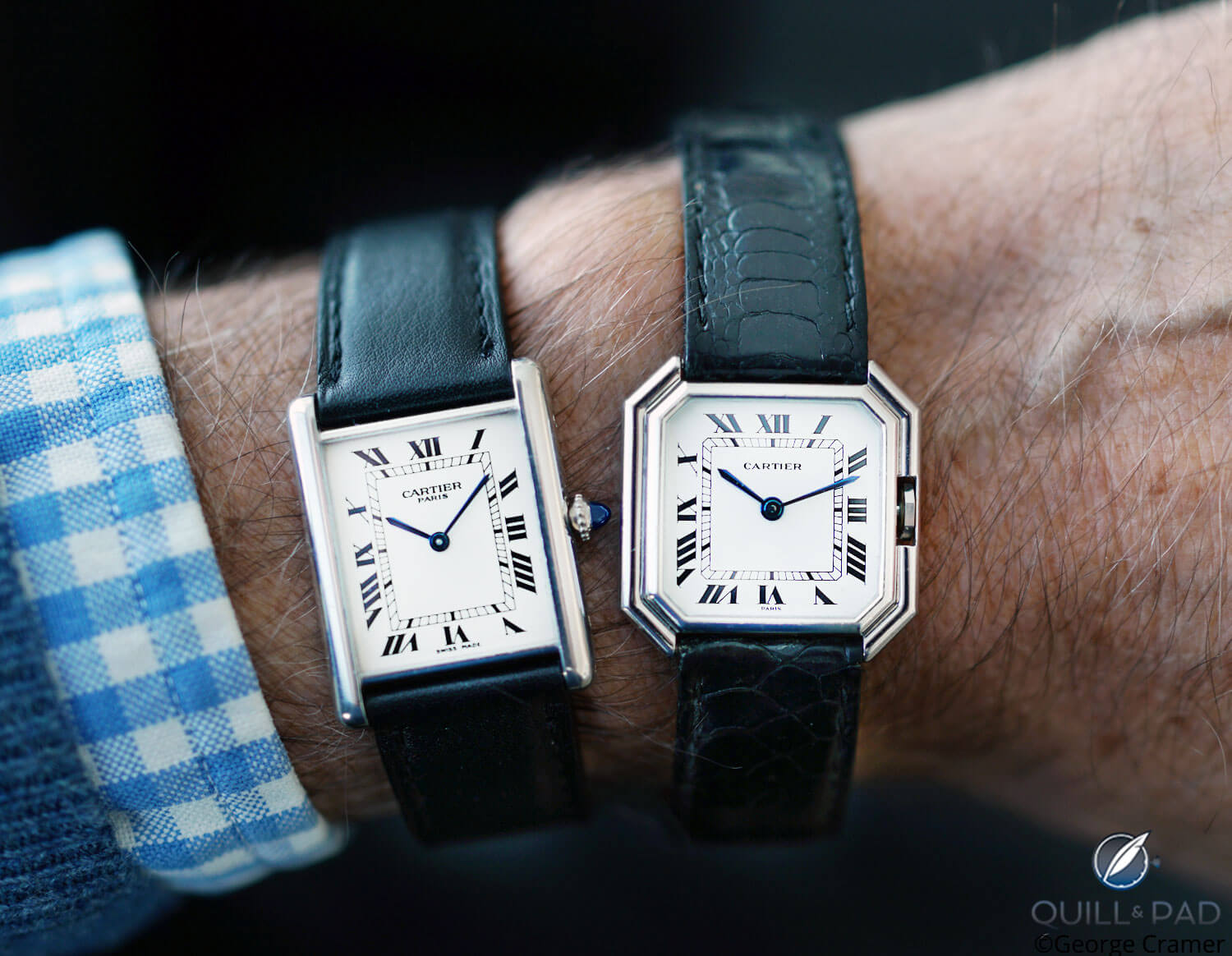 Tank Louis Cartier (left) and Cartier Ceinture on the wrist

I was and remain a bit puzzled as to why the Tank Normale – the first Tank watch Louis Cartier created –and the unique Ceinture were not integral to the very respected Collection Privée Cartier Paris collection.

What is the Cartier Ceinture?

The Ceinture was so named because the case is shaped like a belt’s buckle (ceinture is the French word for belt) with a very interesting square case featuring corners that appear to be “cut.” The winding crown, usually quite prominent and set with a blue sapphire – Cartier’s signature element – is completely flat here, residing in a slot in the watch bezel without its usual sapphire cabochon. This unique feature is one that Cartier calls its remontoir imperdable (“captive winding”). The unusual protected crown (‘remontoir imperdable’) of the Cartier Ceinture

The shape of the crown on a Ceinture watch is octagonal, with a few models possessing flat round crowns with small notches. This is quite an unusual but good-looking solution, especially when we keep in mind that this crown was designed in 1937, more than 80 years ago.

Cartier’s engineers have not forgotten this smart winding solution and brought it back with the release of the Tank Anglaise – and in a way also with the Ballon Bleu – but in both of those cases the crown includes the famous blue sapphire, even if it is somewhat hidden by the case flank.

The larger 31 mm Ceinture with automatic caliber is different from the others. This watch is not only larger, it is also thicker since it has a bulge on the back to make space for its automatic Caliber 170, an ETA movement.

On the wrist, however, that bulge is not visible and the watch looks pretty flat and feels comfortable. This is probably the reason why the automatic Ceinture is more expensive on the secondary market than the model outfitted with a hand-wound caliber. Size and rarity of course also play an important role.

But it is whether the automatic version is more desirable, that remains the question.

For the purists among us, the 27 mm model with manual winding caliber is probably the preferred version.

And when we consider how popular a Santos-Dumont or Louis Cartier from the Collection Privée Cartier Paris period (or before that) in approximately the same case size is, it amazes me that these Ceinture watches are still available for relatively affordable prices.

To me, a Cartier Ceinture watch offers the same classy, chic look as the Tank Louis Cartier or the Santos-Dumont. The going price for the yellow gold mechanical version is around €2,000 to €3,000, but do note that most Ceinture watches were originally delivered with a nonadjustable folding buckle since the adjustable deployant variation didn’t become available until 1989.

This means that a strap probably needs to be custom made to fit your wrist. For some this may be a bit of a hassle, but in the end it is a superb solution for such a small classic watch. Such straps can be custom ordered at Cartier, your local authorized retailer, or a good strap shop like Jean Rousseau or ABP Paris. When I say that the Ceinture is one of those hidden gems of the vintage watch market, I’m not exaggerating.