The Matterhorn is the premier symbol of Switzerland with its nearly symmetrical, pyramid-like peak ranging above the Alps and overlooking the town of Zermatt. One of the highest peaks in Europe, the Matterhorn comprises four steep faces formed by the erosion of multiple glaciers diverging from the peak.

Mountaineers generally attempt to climb the 4,478-meter Matterhorn from the Hörnli Hut, part of the Swiss Federal Inventory of Natural Monuments since 1983, which is where the story of the Jaquet Droz Grande Seconde Moon Serpentine originates: the dial of this limited edition watch is made of rock originating near the Hörnli Hut, which was also the position of the legendary base camp of the first ascent of the Matterhorn in 1865. Jaquet Droz calls this rock with a snake skin-like look and texture serpentinite, which is certainly not wrong. In actuality, though, “serpentinite” refers to the whole grouping of mineral rocks formed by serpentinization – a metamorphic transformation of rock from the earth’s mantle. The resulting stones feel slippery, are brittle, and are quite hard to work with thanks to their low hardness ranging from 3 to 6 on the Mohs scale (diamond, at 10, is the hardest substance on this scale). While this might a difficult substance to use for buildings, its rugged beauty and ability to polish to a waxy luster makes it perfect for a watch dial. The lunar-infused edition of Jaquet Droz’s flagship Grande Seconde was introduced in 2017, and there have been a variety of adaptations since – such as Martin Green’s favorite in red gold and black enamel and Sabine Zwettler’s preferred version in ivory-colored enamel in that same red gold case.

The Grande Seconde is famous for its expansive dial showcasing the brand’s obvious passion for simple precision and its ability to beautifully channel yesterday’s spirit into one that is decidedly contemporary. 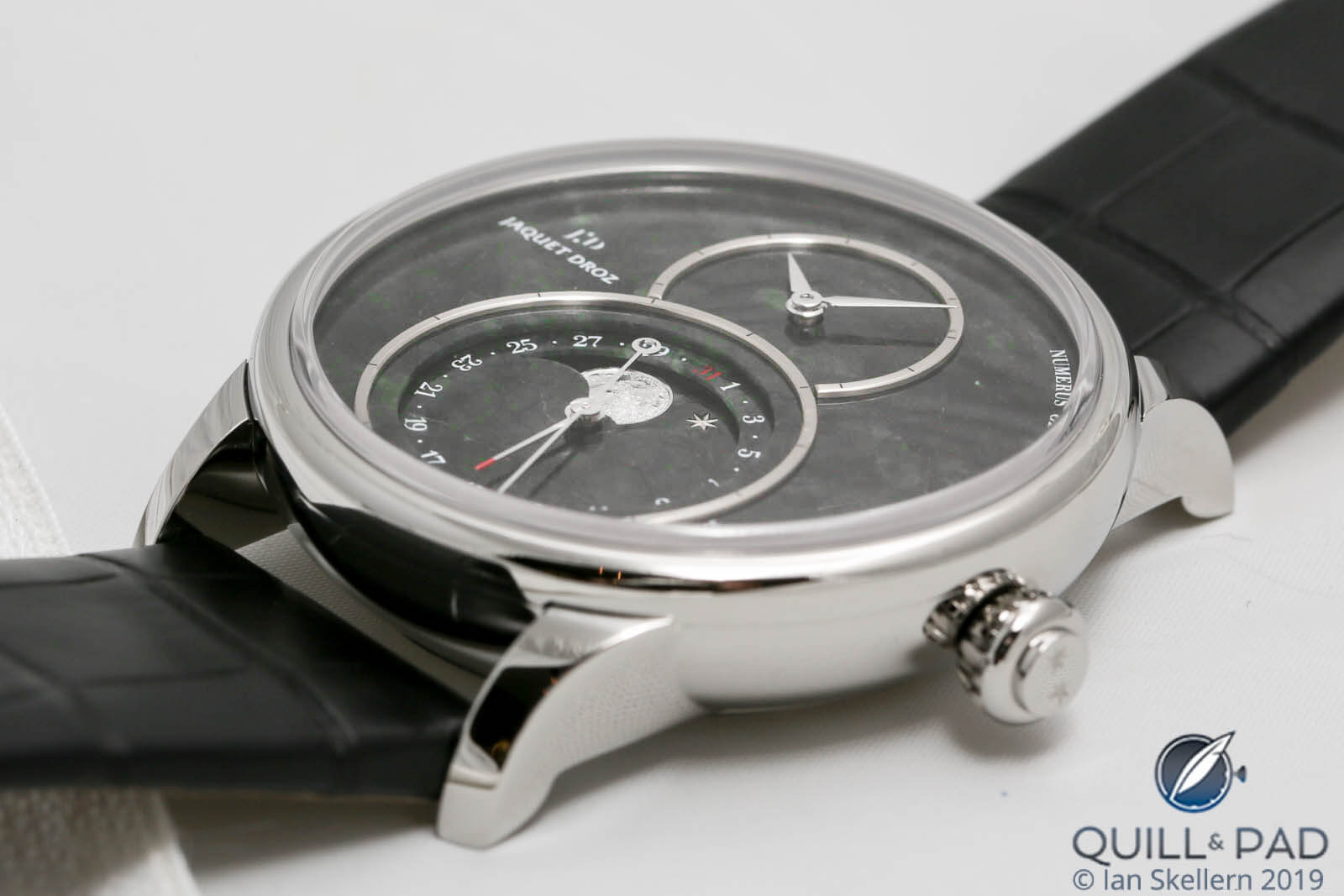 The Grande Seconde configuration is the perfect setting for an additional moon phase, which is unsurprisingly executed in the brand’s timelessly elegant manner by demonstrating genuine artisanship.

The date and the seconds of the Grande Seconde Moon are displayed around the outer edges of the larger lower subdial, while a stunningly realistic 22-karat white gold moon– or, actually, moons, as the disk engraved with a great deal of detail is equipped with two of them –  cycles through its phases in a large aperture in the upper dial. This moon not only looks gorgeous, it is also particularly accurate as this astronomical moon phase only needs to be adjusted by one full day every 122 years (should it be kept wound and without servicing that long).

This new addition to the Grande Seconde Moon collection also shows what a dramatic difference color and materials can make in a watch. The uneven greenish-grey surface of the serpentinite rock contrasts perfectly with silvery-looking stainless steel case and white gold dial elements as well as the white-and-red components comprising the tip of the date hand, the “31” date numeral, and the “numerus clausus” (limited edition) number individually printed onto each dial. And, as anyone who may have seen this process might know, cutting dials from natural stone is not for the faint of heart: first, the dial maker must choose the part of the stone that makes for the most beautiful dial. Then it must be cut and ground to the approximate shape in a rather step time-consuming step. After that, the stone is cemented to a work plate made of brass and ground flat, also a tedious process as tolerances must be precise. Then it is machined to the exact thickness – generally no more than 0.4 mm.

After all that, the stone is carefully drilled using an ultrasound drilling machine and then polished. These precious dials are particularly fragile and hard to work with, so the final step – adding the applied element such as the dial rings and hands – can only be described as harrowing as even the smallest slip would result in this dial heading to the reject pile.

Jaquet Droz is a specialist in using unusual and unique materials for its dials and has over the years most likely used every rare stone available to embellish its limited and unique editions. Jaquet Droz Grande Seconde Moon Black Enamel: I Promise To Tell The Truth, The Whole Truth, And Nothing But The Truth

Give Me Five! 5 Off-Center Classics With Asymmetrical Awesomeness!