When I review watches or write about brands, I don’t necessarily talk about the trips that accompany their launches. But once in a while a brand does something so cool and so fitting to accompany a watch launch that I can’t help but share it.

This was the case with Vacheron Constantin’s FiftySix Tourbillon launch, which took place alongside the introduction of a new music campaign aimed at a younger generation that the brand is using music to reach. 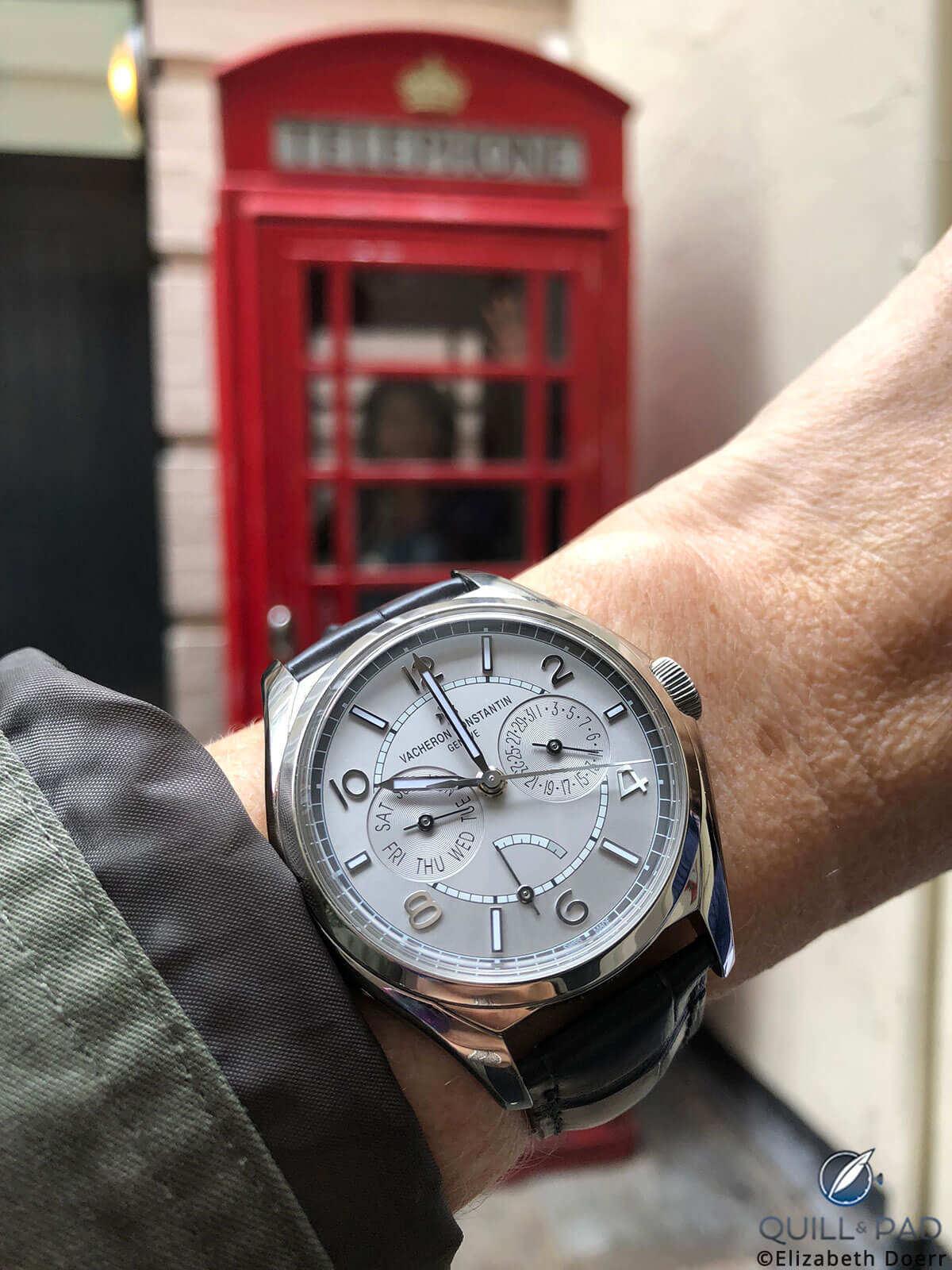 Vacheron Constantin FiftySix Day-Date on the wrist in London

Against all odds, of the three new watches in the fresh, young line inspired by a watch the brand made in 1956 – the Self-Winding, the Day-Date, and the Complete Calendar – it is the Day-Date that has crystallized as the fan favorite. While its 40 x 11.6 mm size may have been ever so slightly out of the range of my personal sweet spot, which is normally about two millimeters smaller, this watch’s lovely strap and deployant buckle compensated beautifully. I barely felt the heft of the watch, so perfectly did it hug my wrist. And it did not look out of place either.

The case, strap, and buckle worked perfectly together to allow the watch to rest perfectly on my wrist. In stainless steel it is a great, classy daily wearer that I was comfortable with almost immediately. Vacheron Constantin’s Laurent Perves also confirmed that the brand had had many requests from media to shoot this particular watch since its introduction because of its quasi-unisex appeal and mid-size.

I asked Perves if he really thought this was a unisex collection, and his answer surprised me ever so slightly. “Everything today is more unisex, which is normal. We live in an equal world.”

Now that’s a concept I can really get behind!

If you’re a fan at all of rock and roll, then you know that London has an amazing history in the genre. And, as home to most of the Beatles’ recordings (as well as some of Pink Floyd’s and others’), Abbey Road Studios played no small part in that. To kick off its new musical recording artist ambassadors Benjamin Clementine and James Bay, who star in the new marketing campaign “One of not Many,” Vacheron Constantin held a dinner event for 150 guests in the very room at Abbey Road in which the Beatles recorded the majority of their music.

Chief marketing officer Laurent Perves, who was in attendance for the duration of the event, announced that the oldest continuously operating watch manufacture and the most famous recording studio in the world would henceforth be embarking upon a collaboration.

Perves says the collaboration with Abbey Road fits very naturally as the most prestigious and established studio in the world.

“There’s a lot of work we want to do together on the subject of sound,” he explains. “We are one of the few specialists of minute repeaters in the world and we record everything we do; you know we have a real science behind it. And we think Abbey Road can partner with us on that domain. Overall there is a lot of opportunity for us not only to communicate but to create beautiful things together.” 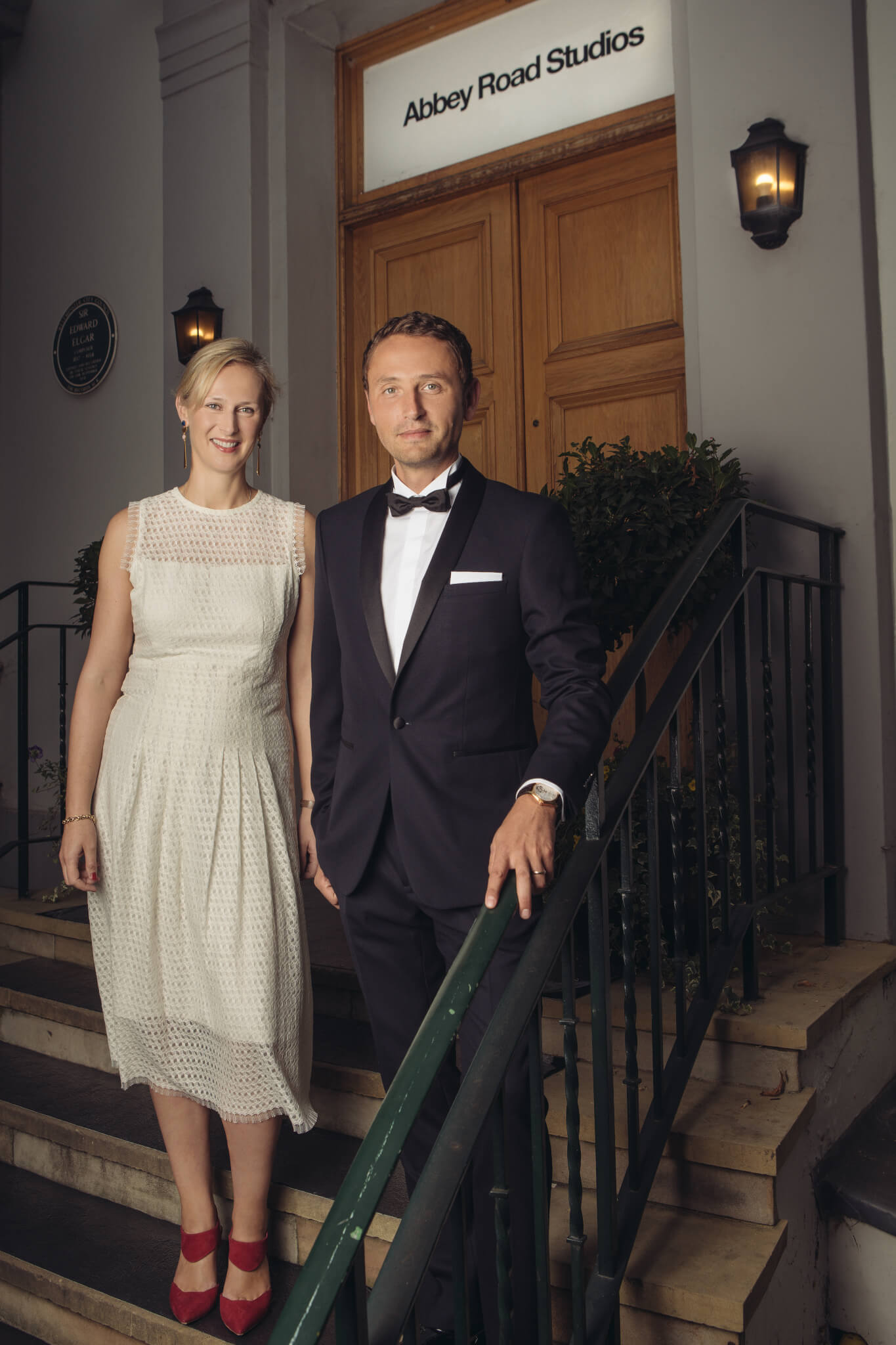 Clementine performed a new track at the event called “Eternity” that was initiated and co-produced by Vacheron Constantin and Abbey Road Studios. “We really wanted to have something much more oriented toward creative collaboration: singular personalities that we clearly didn’t select for a large audience or even for the audience they’re bringing, but much more by what they’re doing and the values they have,” Perves explained.

“For us it was a good moment to have the campaign evolve,” he excitedly continued. “In the past, we’ve talked a lot about our history, we talked a lot about product. We wanted more than anything here to have authentic, genuine relationships with the people we selected or who selected us – one of the talents in the campaign was actually a lover of the brand; he was already buying watches from us.”

Following in the footsteps of rock and roll with Oasis, David Bowie, and Pink Floyd

One of the amazing mini-events that Vacheron Constantin staged during the three-day extravaganza – which felt very much to me like following in the footsteps of rock and roll, starting with the hotel, whose bar “Ziggy” was formerly a David Bowie hangout – was a ride in a vintage car to three famous London locations where monumental rock-and-roll album covers were photographed.

The first concerned Oasis’s (What’s The Story) Morning Glory, whose cover was photographed on Berwick Street in Soho. This street is (or at least was) famous for its small record shops.

The Big Issue tells the full story of the Oasis album’s artwork, which was in a nutshell supposed to feature band founders Noel and Liam Gallagher. The photo, shot on 35-millimeter film, however, does not show the famous brothers because they did not appear for the shoot. 23 Heddon Street, London, where the cover of David Bowie’s ‘The Rise and Fall of Ziggy Stardust and the Spiders from Mars’ was photographed

We then headed to what is probably the most famous London album cover location, one that is even marked with a plaque: 23 Heddon Street, the location of the cover photograph for the 1972 David Bowie album The Rise and Fall of Ziggy Stardust and the Spiders from Mars.

The side street where the cover was photographed now looks completely different than it did in 1972, but the owner of the cute bistro with outdoor seating was very nice about the horde of tourists ascending on the spot. I suspect they are used to it.

This album, justifiably considered one of the greatest in rock-and-roll history, tells the story of a fictional rock star called Ziggy. Finally, we headed to Battersea Power Station on the Thames, which was the subject of Pink Floyd’s Animals cover art. Released in 1977, the psychedelic rockers’ concept album is loosely based on George Orwell’s Animal Farm.

And all too soon the gratifying hours spent following in the footsteps of major rock-and-roll history combined with watches and vintage cars was over, but it remains a moment I’ll treasure forever.

Almost incidentally, it seemed to me, Vacheron Constantin also introduced a fourth member of the FiftySix line at this time: the FiftySix Tourbillon. “This is really the idea of the modern tourbillon watch, but at the same time of course, we wanted it to be Vacheron Constantin,” Perves explains the idea behind the design of this whirlwind. “So we looked at the archives for a long time to see first of all what was the right period, and the 1950s were perfect because it was just after the bicentennial of the Maison, it was Golden Age with a lot of creative ideas, and our first automatic movement had just appeared.”

Caliber 2160, which powers this beautiful timepiece, was the first automatic movement developed by Vacheron Constantin. The ultra-thin beauty with a 22-karat gold peripheral rotor to avoid covering the gorgeously finished mechanics can also be found beating away in the Traditionnelle Tourbillon and 2019’s very lovely Overseas Tourbillon (see it in Top 5 Wristshots from 2019 SIHH). With its visible rotating escapement placed at 6 o’clock on the silvered opaline dial – one that resolutely retains all the other design codes of the new FiftySix line, including the sector style and the “young” font for the numerals – this addition to the line is certain to appeal to the brand’s dyed-in-the-wool clients as well as the younger generation of consumer at which the brand aims this line.

Introducing a major complication so quickly to the line was a very smart move as it serves to include the brand’s existing customers in the conversation. It will be available in April 2019.

“As much as it might seem like a revolution outside, it’s just a very natural movement forward because the world keeps moving and we need to move with it,” Perves very aptly sums up.