Blancpain Air Command: A Contemporary Remake Of An Officer And A Gentleman

During the recent Time to Move event, Marc A. Hayek, Blancpain’s president and CEO, was visibly excited as he presented the new Air Command in the brand’s “farmhouse” factory location. The original Blancpain Air Command: a slow start to history

While the Air Command has been part of the Blancpain collection before, this is the first time that the brand has allowed a modern interpretation to resemble the original so closely. There is not much known about the history of the original Air Command other than that it is rarer than an albino eagle. The Air Command was created in the 1950s, allegedly for use by the U.S. Air Force. At the time, Blancpain was already officially supplying the Fifty Fathoms diving watches to the U.S. Navy through its U.S. distributor, Allen Tornek.

Only around 12 prototypes were said to have been made at that time, with the watch never making it to serial production. The new Air Command is quite faithful to the original, yet not a complete re-creation. With a diameter of 42.5 mm it is however only marginally larger than the 42 mm of the original. And the dial is slightly revised. The railroad track and tachymeter scale no longer cut into the subdials, and the Arabic numerals are a bit more pronounced. But aside from these minor details, the new Air Command looks very much the same as the original, though it has quite a different feel.

I had the opportunity to handle both the vintage Air Command and its modern sibling, and the direct comparison highlighted how technical advances gave the modern watch more solidity. It feels stronger. Tougher.

Air Command: new does not always mean better, but it does this time

While some may ask whether Blancpain lacked the creativity to create something truly new, I don’t belong to that camp. I consider the new Air Command a great watch keeping part of the brand’s history alive, as well as an exquisite opportunity for 500 enthusiasts to enjoy its contemporary design and modern construction and materials. 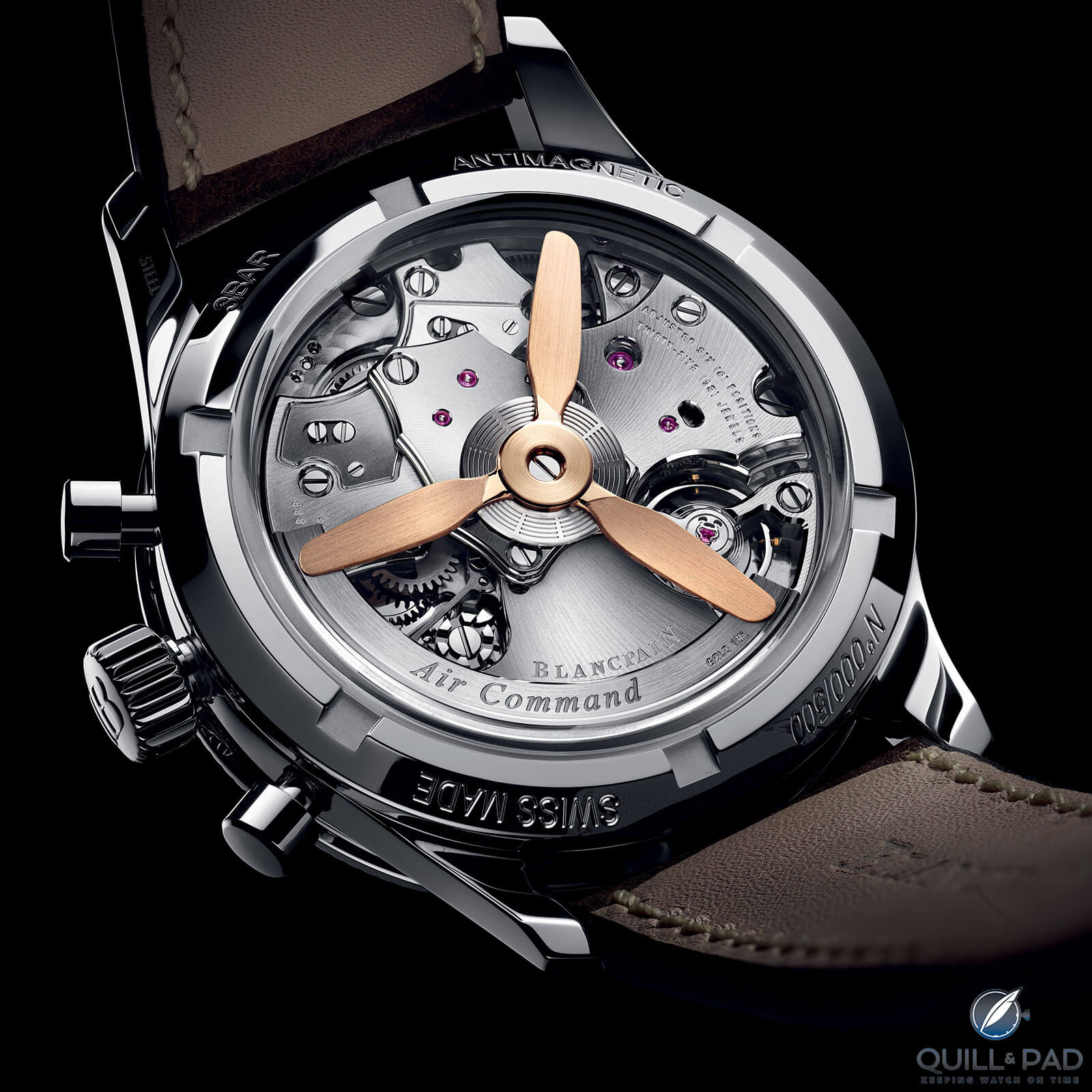 Purists may dislike the rear view of the new Air Command watch, with its rotor resembling the propeller of a plane visible through the display back. To some it might look like a gimmick, but it is crafted with care and eye for detail. For me it adds a bit of extra charm. Back of the Blancpain Air Command

What is also great about the rotor is that it doesn’t cover too much of Caliber F388B (which I still think sounds like the designation of a Ferrari model).

Blancpain opted for a refined technical finish for the movement, which suits the watch nicely. The same can be said of some of the more outstanding specs: high frequency of 5 Hz, column wheel and vertical clutch plus flyback function for the chronograph.

I find the Air Command’s dial layout quite pleasing to the eye. Overall, I think that Blancpain has made a very faithful interpretation of the Air Command utilizing modern-day technology. You get to enjoy vintage style with the benefit of modern features including a ceramic bezel and high-performance movement.

The only downside I see to the new Air Command is that it is limited to just 500 pieces. I would have loved for it to be part of Blancpain’s regular collection with a limited annual production instead of the limited edition because I think that this watch is so cool, I would enjoy the chance of seeing it on more than 500 wrists.

Blancpain Tribute To Fifty Fathoms MIL-SPEC: Ready For More Than A Quick Swim