Grand Seiko Spring Drive Chronograph GMT SBGC203: You Can Have It All

For many years Grand Seiko has been a bit of an insider secret. In an often-understated design, it has however represented the ne plus ultra of Japanese watchmaking.

Until recently, these Japanese watchmakers were so modest about their work that you had to know the brand to appreciate it. Fortunately for the world, a lot has changed in recent years. Grand Seiko has expanded its retail network exponentially and its designs have become more expressive.

A great example of this is the SBGC203, Grand Seiko’s first Spring Drive chronograph. I recently had a chance to wear the SBGC203 for a while and was struck by its bold appearance. This is due to both its generous diameter of 43.5 mm and even more so by the large chronograph pushers and crown; 16.1 mm in height makes for a very substantial watch, yet I was surprised how well it sat and wore on my modestly sized wrist. I should have expected this for two reasons: first of all, most Japanese men have modestly sized wrists and they still make up the main market for this watch. And, secondly, we are talking here about Grand Seiko, a brand that has explored nearly every dimension of perfection, passion visible in every detail.

Most of these details serve a purpose, and as a result of that the SBGC203 is highly legible. It comes with a complete set of complications that alongside the chronograph also includes a second time zone, date, and power reserve indicator.

The minute and hour counters of the chronograph and the date are positioned on the right side of the dial. So when the watch is tucked under the sleeve of a jacket, it doesn’t have to come out completely for the wearer to be able to see the most used complications. The watch features a curved sapphire crystal with anti-reflective coating on the inside. There is however quite a bit of glare on the dial under various light conditions.

I am never a fan of an anti-reflective coating on the outside of a sapphire crystal, which might have solved this issue, because over time the coating will scratch. That not only looks terrible but also annoys the heck out of me. I do wonder if a flat sapphire crystal would make this watch less susceptible to glare.

In Grand Seiko’s quest for perfection I would like to suggest that the brand actually name its models with words: SBGC203 just sounds so unsexy.

Although it is a very technical and organized way to designate a specific watch, very in line with how this brand works, I think that the timepieces would fare even better in Western markets if they were to be given an actual name.

Personally, I would prefer a Japanese name, though, as the language has so many beautiful words in it. And this would also underscore the unique nature of these watches.

You can have it all: the Seiko Spring Drive proves it

High-end watches tend to come with a trade-off, and when it concerns added complications they at times don’t fare well in terms of legibility. But this Grand Seiko proves that the brand has that covered: this watch is living proof.

Large watches are usually not the most comfortable, but smart design also fixed that, which is impressive as the SBGC203 is crafted in steel and not titanium, which Grand Seiko also frequently uses.

Seiko has been able to keep the weight down to 187 grams, bracelet included. When it comes to luxury watches mechanical movements are still king, but their precision cannot compete with that of a quartz watch. With the SBGC203 there’s no trade-off as it is fitted with a clever Spring Drive movement.

This movement offers various advantages, the most obvious one being the average accuracy of ±15 seconds per month, which is unprecedented for a “mainly” mechanical movement.

I say “mainly” because purists argue that there is electricity needed to make it function. A small rotor connected to the gear train gets its power from the mainspring, generating an electric charge that is supplied to an electronic circuit and quartz oscillator.

This plays a vital role in achieving the high accuracy of the movement. An added advantage is that the hands don’t tick but rather glide in a super-smooth motion, making no noise. You don’t notice this too much in the small second hand here, though you do in the centrally mounted sweep hand that counts the elapsed seconds for the chronograph. 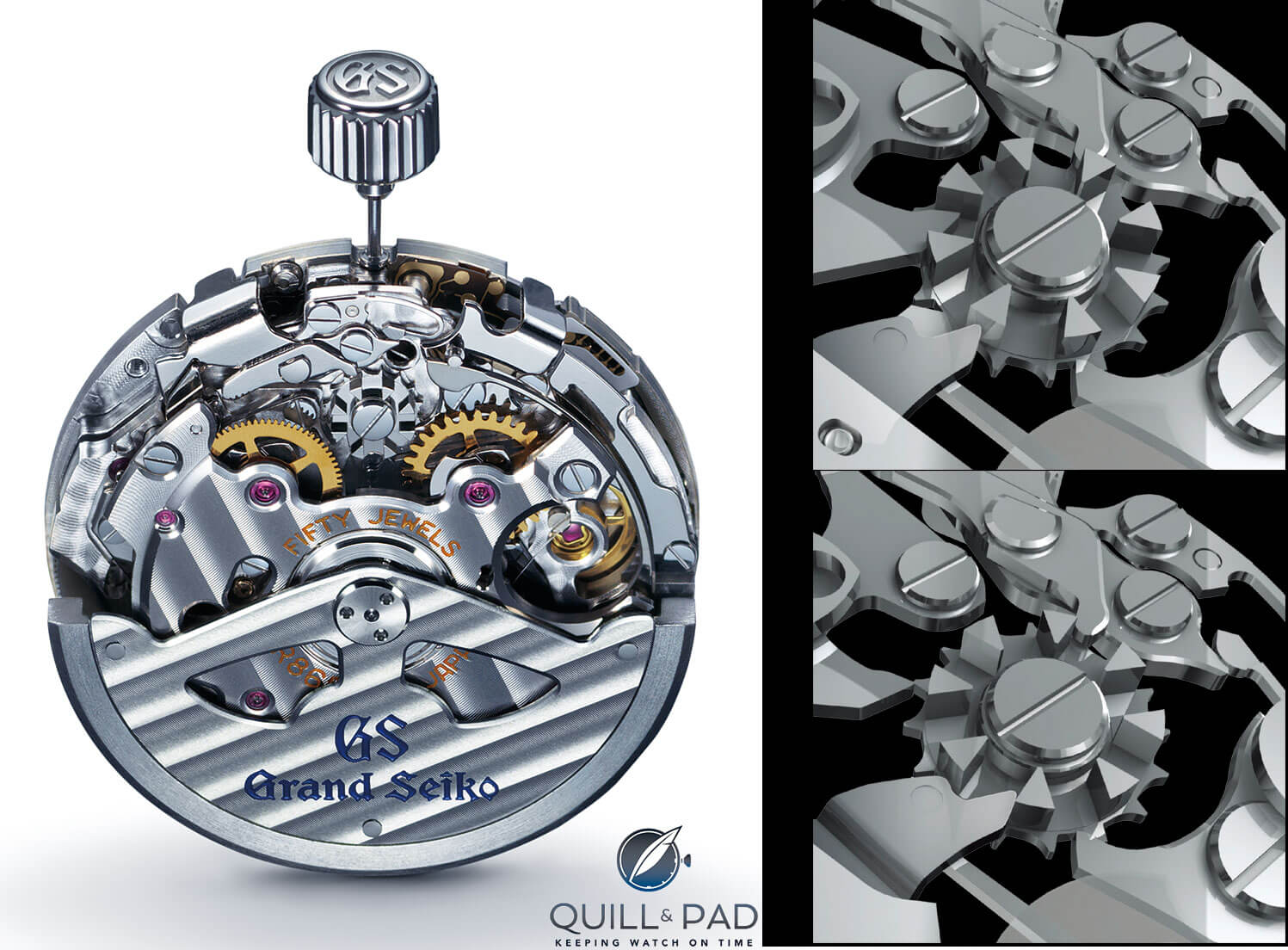 The mechanical setup for the chronograph is as one would expect from a high-end watch with a mechanical heart; it is not only fitted with a column-wheel but also a vertical clutch.

This innovative movement can be admired through the transparent case back, where the quality of the finishing also captures the eye.

The watch’s water resistance is a generous 100-meters, which certifies this Grand Seiko not only as a bona-fide sports watch, but as an all-rounder as well.

With all these features it seems that Grand Seiko aims to get as much wrist time for this watch as possible, and after a few days it did indeed feel like it belonged on my wrist. That I mention this says quite a bit: I am usually an ultra-thin dress watch kind of guy.

When it comes to bang for your buck is Seiko one of the leaders of the pack. Prices are in general modest, especially taking into account the quality that even the entry-level watches have.

The Grand Seiko Spring Drive Chronograph GMT SBGC203 is by no means an entry-level watch: €8,300 is a substantial price, yet on the other hand there is no competition; Spring Drive offers the perfect balance between quartz precision and mechanical sentiment, combining several of the most used complications in a single watch. And the finishing is on par with (if not better than) many of its Swiss competitors. Where I feel that this Grand Seiko genuinely earns its keep is its original design, which has quite some character and doesn’t look like anything else already out there. The wearing comfort of this watch is also superb, especially considering its size.

All told, this makes for an extremely versatile and balanced creation that proves that on rare occasions that you can indeed have it all.