If you like technology, watches, and sports – and you like them all together – you’re in luck: Richard Mille has just joined a McLaren co-created professional cycling team as one of the main sponsors.

While the focuses of these three entities might seem disparate at a casual glance, they are by no means that: both Richard Mille and McLaren stand for pure technology in their respective fields. However, what you might not know is that McLaren has also been developing high-tech bicycles for some time within its Applied Technologies division, working in particular with a Californian bike manufacturer to produce the Specialized S-Works+McLaren Venge racing bike. McLaren GT with Team Bahrain McLaren bikes on the roof

McLaren Applied Technologies is involved in elite athletics and aids in creating high-tech modern versions of instruments like bobs, yachts, rowing and canoeing equipment, and other items that have even made it as far as the Olympics. The Venge bike has more meaning for sports fans perhaps when you learn that Mark Cavendish, one of pro cycling’s greats already at the age of 34, won several Tour de France stages on it.

But if (like us) you’re a fan of McLaren’s cars, you may be asking if it makes sense for McLaren to diversify like that. The answer is: of course it does. When you’ve spent decades researching and developing ultra-light materials for automobiles, why not use them for other means of transportation and even professional sporting instruments as well?

“We could be talking about F1 racing except for the internal combustion engine,” Allert said, referring to McLaren’s take on pro cycling.

In this and so many other ways, McLaren is the perfect partner for Richard Mille: they share many of the same values and viewpoints in terms of technology and how to conduct business. And both McLaren and Richard Mille value the importance of cutting-edge research and development.

And, of course, cycling skews a younger audience demographic, which Allert explained is split 50-50 among men and women. And that’s an audience all watch manufacturers are eager to reach.

The first thing to perhaps note is that Team Bahrain McLaren has emerged from what was previously Team Bahrain Merida, changing its name to reflect the joint-venture status.

After I spent a surprising day at McLaren’s Technology Center in Woking, England, filled with new experiences and ideas alongside press conferences, it became quite apparent that the team’s principals and the technology-driven company are out to change the landscape of pro cycling by bringing what they consider the best of technology, minds, athletes, and passion to the sport.

The team consists of 28 riders, one of whom is Cavendish, among the most decorated British cyclists of all time, having won four world championships, an Olympic silver medal, and 30 Tour de France stages.

Cavendish is no stranger to the Richard Mille family, either, having been a “friend of the brand” (but not an official ambassador) since 2016. He wears an RM 011 Felipe Massa 10th Anniversary Limited Edition received right off the wrist of Richard Mille himself in 2016. And Cavendish also wears the RM 022 Tourbillon Aerodyne All Grey and a small variety of other models, including that crazy 50-03 Tourbillon Split-Seconds Chronograph Ultralight McLaren F1. He is a big fan of the man and the brand. Other standout riders on the new team include Mikel Landa and Wout Poels. Landa, Cavendish, and Iván García Cortina were on hand at the December 9, 2019 press conference day to help usher in the new era. 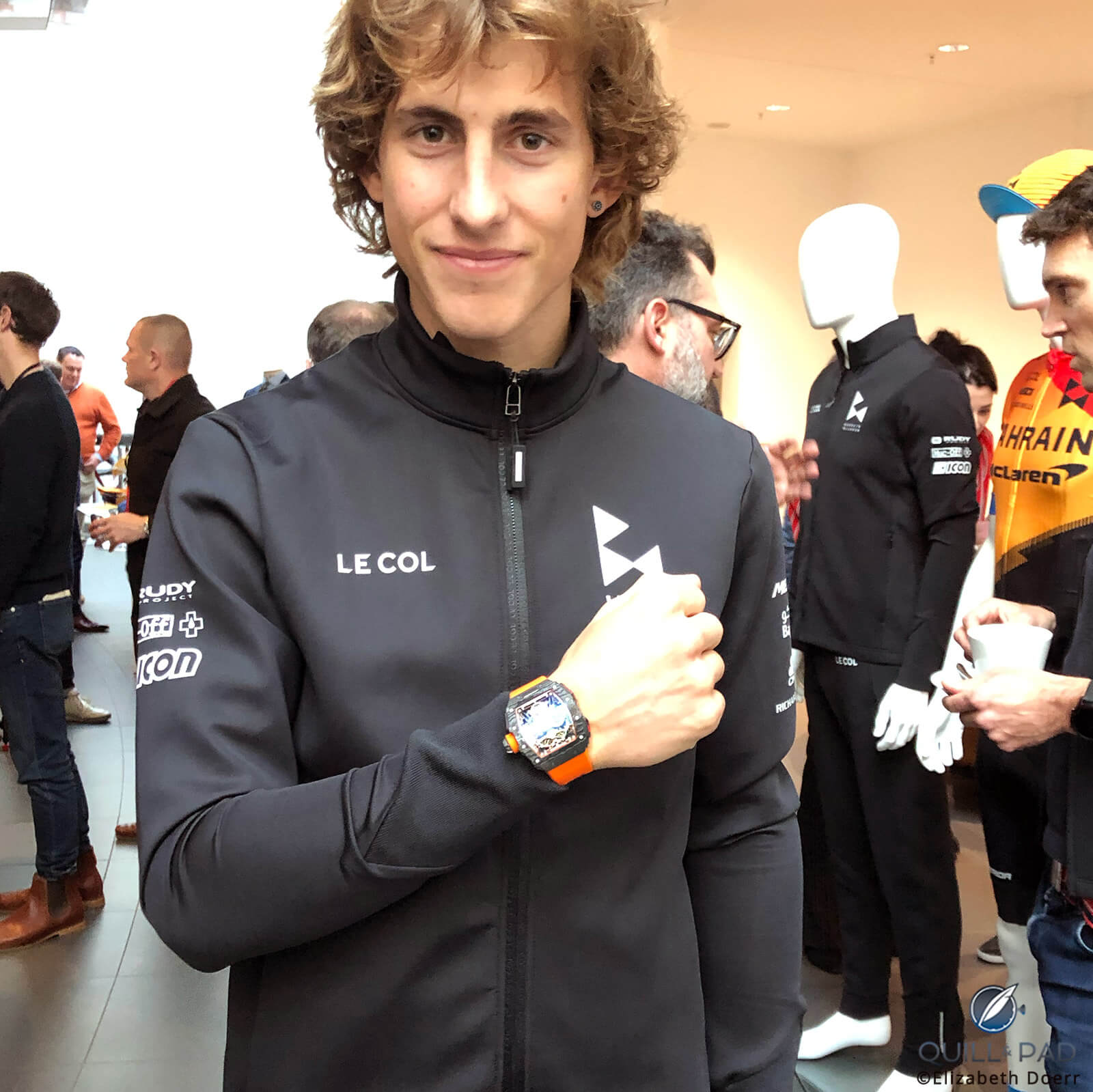 Richard Mille plans to contribute RM 67-02 prototypes in the team’s papaya-based colors sometime in 2020 – “papaya” is the emblematic hue that Bruce McLaren, a New Zealander, chose as his company’s corporate color back in 1963. You may remember the 67-02 from Richard Mille’s short-lived partnership with tennis player Alexander Zverev. The spokespeople are certain that this will be the most technologically and athletically advanced team on the tour. Team principal Rod Ellingworth adds, “This is a team built for tomorrow with a respect for the past.”

Allert adds his take: “To exploit the technical know-how and take a disruptive approach that others have not yet taken.”

Richard Mille launched a ten-year partnership with McLaren in 2016, which has already led to two inspired watches: the RM 50-03 and the RM 11-03 McLaren. And here McLaren would basically like to do in cycling what it’s done already in motor racing . . . and they company is taking Richard Mille along with it for the journey. Hold on to your hats!

McLaren 720S Spider: A Week With The Everyday Supercar, In Traffic And On The Autobahn (Photos and Video)

You Are There: A Day With McLaren And The 570S Supercar

You Are There: Visiting McLaren With Richard Mille