Watch cases come in lots of different materials including steel, titanium, carbon fiber, plastic, and platinum. But the most common choice for classic dress watches has to be gold: red gold, pink gold, or white gold.

But have you ever wondered where that gold originally came from? And by “originally” I’m not referring to a gold mine on earth but the original source of the gold even before it arrived on our planet.

Can you guess how this extra-terrestrial gold was made? I doubt it, but spoiler alert: it involves an explosion, a very big explosion! All gold on earth came from outer space

A star is born

But before we can look how heavy elements like gold were made, we first need to understand how the lightest element, hydrogen, came into being.

While we do not understand how or why as yet, all of the evidence points to the universe beginning with a Big Bang around 13.8 billion years ago. All of the energy (heat) in the universe today was contained in a single microscopic point, which began rapidly expanding.

Evidence of this violent beginning comes from observations of cosmic microwave background radiation, the afterglow of light and radiation left over from the Big Bang.

Move along please, no gold here

At this stage in the universe there was no gold, in fact there was practically nothing in the entire universe except hydrogen and helium. Over the next few hundred million years gravity caused the gases to clump together in ever-larger clusters until some got so large that their own gravity was strong enough to fuse hydrogen atoms together to form helium (a process called nucleosynthesis). The energy generated by this nuclear fusion caused the stars to ignite.

The gravity of small to medium sized stars (like ours) is only strong enough to fuse hydrogen into helium. So when the hydrogen runs out, as it will in our own sun in 5-6 billion years, the star goes out in a great explosion and then collapses into a white dwarf star. Comparing the size of stars: while our sun is very big (on left), other stars like Arcturus can be much larger

Our sun is very big, but there are many much bigger

But there are stars much larger than ours – much, much larger.  Some are more than 1,000 times the diameter of our sun and these large stars have much more gravity than ours. And this enormous gravity enables them to fuse helium together into larger elements like carbon, nitrogen and oxygen, which didn’t exist until then. Supernovas: the largest explosions in the universe

Once giant stars use up all their light elements as fuel and start fusing iron, they go out in a fraction of a second and collapse into themselves under the weight of their enormous gravity.

The collapse of these snuffed-out giants creates the largest explosions in the universe: supernova. So much energy is released in a supernova that the light briefly outshines their whole galaxy. 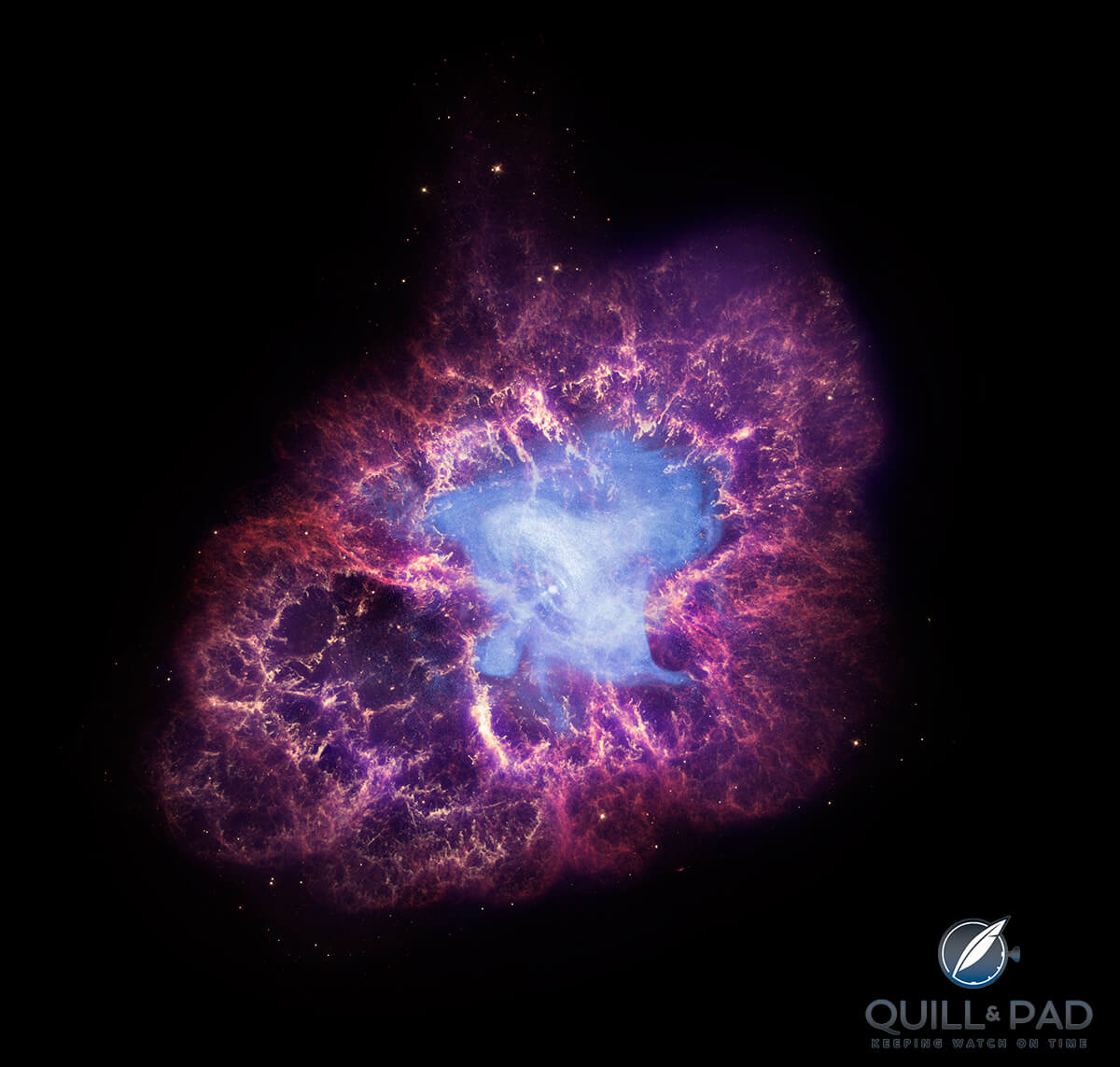 The Crab Nebula is the remnant of a massive star that ended its life in a supernova explosion; it has a rapidly rotating neutron star, or pulsar, at its core

After the supernova, the immense gravity of these dead leviathans can either force it to collapse into itself and form a black hole or, if its mass isn’t large enough, it will collapse and form a neutron star.

Neutron stars are the densest objects in the universe and can contain mass many times that of our sun in an object just tens of kilometers/miles in diameter. One single teaspoon full of neutron star would weigh a billion tons on earth!

A rotating neutron star is called a pulsar due to the pulsating light emitted by jets of particles streaming out above their magnetic poles. Artist’s impression of a pulsar or spinning neutron star; the bright green represents powerful jets of radiation and light that shines though the universe like the beam from a lighthouse

The incredible shock waves generated by supernova were once thought to fuse lighter elements (up to iron) into heavier elements, e.g. gold. But the sums didn’t quite add up, i.e. the biggest explosions the the universe just didn’t seem big enough, or numerous enough, to explain the quantity of gold (and other heavy elements) in the universe.

So until recently, we weren’t really sure where gold came from. Artist’s impression of two neuron stars colliding; just a single teaspoon of material from these stars would weigh around a billion tons on earth

A long, long time ago

Around 3.9 billion years ago, just as the very first microbiotic life appeared on earth, two neutron stars collided. They were not very big, just tens of kilometers across, but each had around 1.5 times the mass of our sun.

That collision caused a humongous explosion and light and energy radiated out in all directions.

Some of that light headed towards earth. 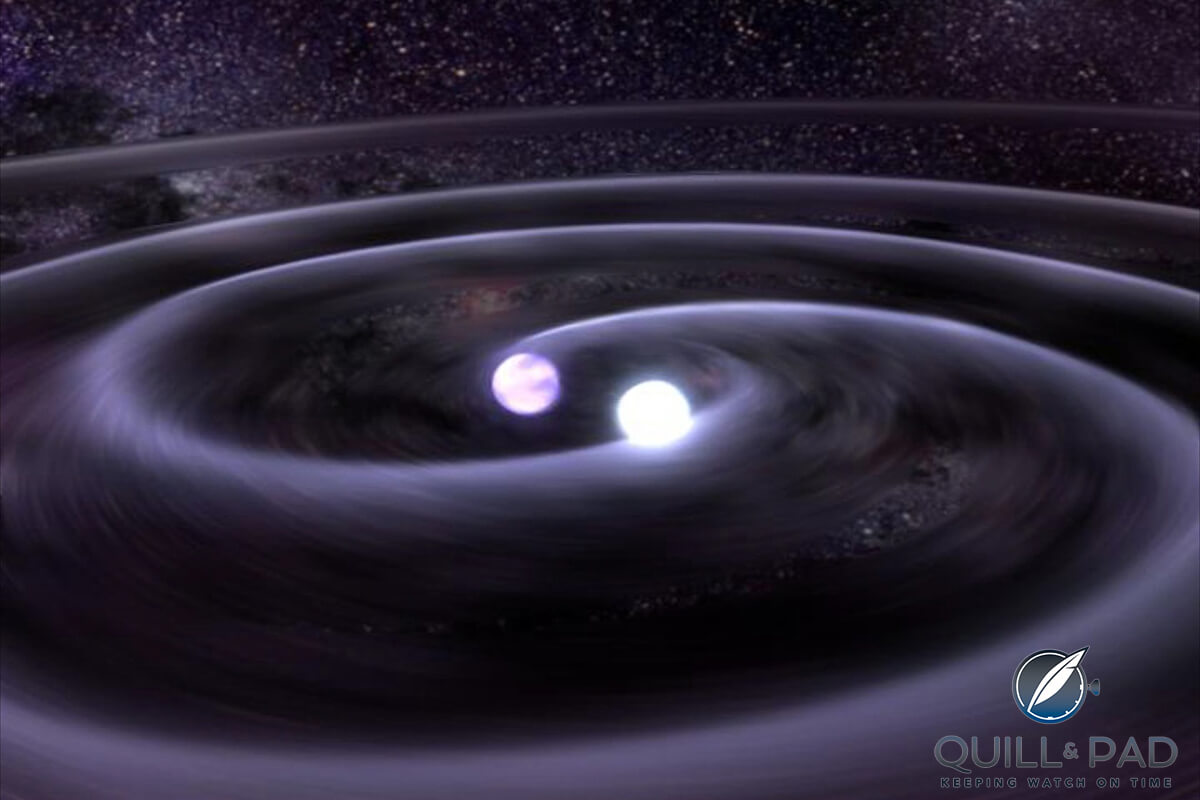 Two neutron stars spiraling in toward each other

The flash lasted 0.2 seconds, just half the blink of an eye. But that was long enough for NASA’s Swift satellite to pick it up and relay the news to earth.  Over the next few days, telescopes on earth and in space (Hubble) searched the region where the flash came from.

After analyzing the data they came to the conclusion that neutron star collisions are responsible for creating virtually all of the heavy elements in the universe, e.g. gold, mercury, lead and platinum.

Images snapped by the Hubble Space Telescope nine days after that first 0.2 second flash provided evidence of a lot of heavy elements, including several moon masses of gold. “Given the amount of gold in that one collision, and the fact that these collisions are thought to occur once every 10,000 or 100,000 years in any given galaxy, the crashes could account for all of the gold in the universe,” reported reported Edo Berger of the Harvard-Smithsonian Center for Astrophysics.

The neuron stars that collide like this aren’t just flying around and unluckily hit one of their own kind. They are the result of a binary solar system with two giant stars that both explode as supernovas and collapse into neutron stars. Their gravitational force gradually pulls them together like magnets until they collide.

The resulting collision concentrates so much mass in one place that it collapses on itself, often triggering the formation of a black hole. However, a small amount of matter gets ejected and is eventually incorporated into the next generation of stars and planets in the surrounding galaxy. And some of the debris is flung even further afield. If all the gold ever mined was melted into a solid cube it would be approximately this size; the small gold sphere in front of the couch would weigh one metric ton and have a value of more than $50 million

Gold (and other heavy elements) is rare on earth because it is so rare in the universe. It’s estimated that all of the gold ever mined on earth would fit into a cube just 25 meters (82 feet) on each side and would fit in two Olympic-sized swimming pools.

And if you are wondering why platinum is so expensive, it’s estimated that all of that noble metal ever mined would fit into a cube with 6.3-meter (20 feet) sides. So how did the gold get to earth?

If gold was formed by colliding neutron stars in far distant galaxies, how did it get to earth you may well ask. The answer is meteorites.

And not just any meteorites. Most of the gold we are interested in, i.e. that we can hope to dig up, arrived by in a massive shower of meteorites that hit the earth 3.8 to 4 billon years ago. Before that the earth was still so molten that any heavy elements would have been pulled into the planet’s iron core.

So the next time you wonder if that watch with a gold (or platinum case) is really worth the money, just consider that it was formed during the collisions of neutron stars, ejected as the stars were collapsing into a black hole, and arrived on earth around 4 billon years ago by hitching a ride on a meteorite. And that’s all before it was found, mined, refined, sculpted and fitted with a watch movement.

So making gold isn’t that difficult, simply crash two neutron stars into each other at very high speed, step back (a long way back), and then sift through the pieces while being careful to avoid possible black holes. But as the title warns, don’t try this at home! How To Make Gold. Warning: Don’t Try This At Home!