The click spring is one of the smaller components of a mechanical watch, but it is of enormous importance.

Have you ever wondered why the crown doesn’t retaliate furiously and unwind every time you crank it? Without the click spring digging into each tooth of the ratchet wheel, a wound mainspring would immediately – and explosively – uncoil like a raging viper in a hat box.

The click spring is effectively a doorstop on an unlocked door, behind which innumerable evils are fighting to break through. But its presence, like a doorstop, is often understated.

The click is a humble pawl commonly found shaped like a beak or as a cam with two tips. It is held in tension by a spring that forces it against the ratchet wheel of the mainspring barrel or intermediary gear.

The spring is often concealed or extends visibly along the outermost edge of the movement. Most commonly, the click visibly pivots on the screw that secures it; occasionally it is concealed by its own bridge or cock.

Even in basic form the click generates a rather satisfying audible and tactile experience when hand winding. But those who have wound a serious manual timepiece will appreciate that the click can be upgraded to something of a piece of art to see, feel, and hear.

It’s a simple mechanism, rarely drawing attention to itself. But as we see here, when truly talented watchmakers are given a blank sheet to design a movement, something of their personalities can be still be expressed within the simplest of mechanisms.

The following are some of the more exotic and refined click springs out there.

It is worth mentioning that this click is actually one of the more traditional varieties and can be found on some lovely Patek Philippe (and other) pocket watches. However, it remains rather unusual and no less beautiful on a wristwatch. The “crossbar” or ”cutthroat razor” click consists of an elongated bar fixed by a blade spring at one end with a pawl finger at the other end. As the crown is turned to wind the watch, the ratchet wheel rotates clockwise (in the case of these two examples) and the left side of the bar lifts as each tooth passes beneath it.

The wheel lifts the click in this direction with only the tension of the click spring to deal with. But when the ratchet wheel tries to unwind in the other direction, the click bar is forced flush against the plate and it stops dead. The Laurent Ferrier “crossbar” example is similar to the Dufour “cutthroat razor.” The former has a concealed blade spring on the right, while the latter has the spring running across the ratchet wheel to a shortened bar, giving rise to the image of a cutthroat razor.

You might recall the fictional Mr. Tickle, whose unique anatomy allowed him to tickle people from the other side of the room. Likewise, the spring for this simple click is anchored some distance across the ratchet wheel, reaching across the top of the movement. In the example of the Akrivia Tourbillon Regulator, the format contributes to the overall visual symmetry of the movement. It’s actually quite common to see a click spring extending this sort of distance, certainly once the plate is removed. The format makes for a supple and satisfying click experience; however there are few “Mr. Tickles” as attractively constructed and well presented as that on Akrivia’s Tourbillon Regulator.

If you understand that the Ouroboros is an ancient Egyptian symbol of a serpent eating its own tail, you might well see a reflection of that symbol on the Arnold & Son 8513 caliber. The click on this rather exotic movement has a long blade spring that coils back on itself, providing the resistance to the pivoted click finger. It’s a simple, effective, and very attractive method.

Even though it’s one of the simpler models in the Greubel Forsey collection, Signature 1 offers small small Easter eggs that await discovery by the discerning collector. This concealed click, built into the tripod bridge of the barrel, is one such example. You would be forgiven for losing yourself in the frosting, chamfering, and clean lines of the gear train before noticing this little detail. But when you observe the winding of the watch from the movement side, the click leaps into action to announce its unique presence. 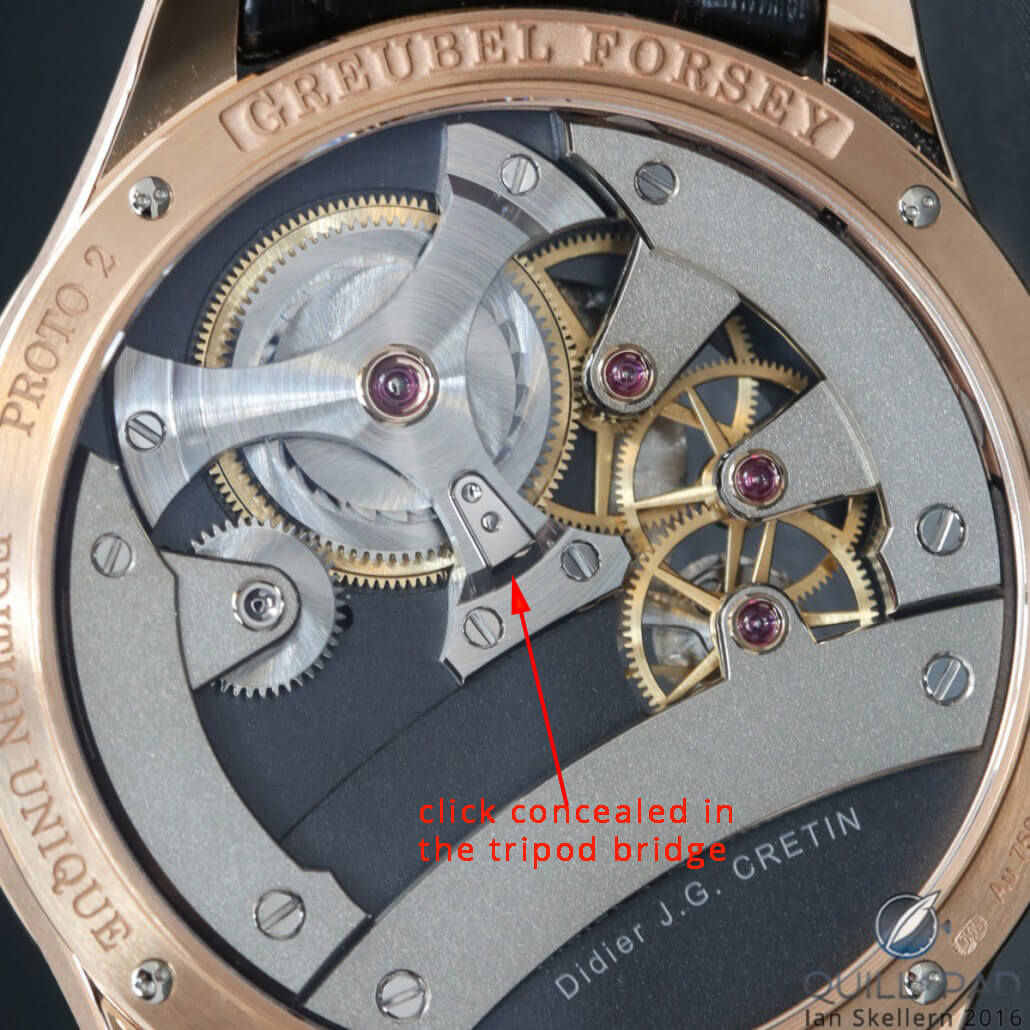 This rather special “tripod” click is positioned on top of the ratchet wheel and moves laterally outward as the crown is turned. It really has to be seen to be appreciated, so it’s particularly fortunate that Ian took the time to document it in Signature 1 By Greubel Forsey And Didier Cretin: Traditional In A Non-Traditional Way (And Check Out That Click!).

The click is typically anchored to the movement plate, and when there are two barrels side by side it is positioned on one of the two barrels or an intermediary wheel. No technical enhancement necessary; this is a perfectly effective solution as demonstrated by the Arnold & Son DTE.

However, the “dual wing” movement of the Jaeger-LeCoultre Duomètre á Chronographe is no ordinary double-barrel configuration. The movement has two independent mainsprings coupled by the same manual winding transmission to power two independent complications.

To charge one mainspring you turn the crown clockwise, to charge the other you turn it counterclockwise. The two wheels that encircle the ratchet wheels (let’s call them the “winding wheels”) need to be able to turn in both directions to wind their own ratchet wheels and the wheel of the neighbor.

A transmission that can wind in both directions, while not unwinding in either isn’t obvious.

The Duomètre puts the click to spectacular effect, with each winding wheel having not one but two “passenger” clicks each, taking the form of a sort of two-serpent Ouroboros. The winding wheels circle the ratchet wheels, and it is the clicks themselves that drive each ratchet wheel rather than lock them. How does the neighboring ratchet wheel stay in place while the two clicks are not winding it? With another click, of course!

Each barrel has an extra click concealed beneath the visible gearing, preventing both ratchet wheels from turning counterclockwise and unwinding the mainspring. With six clicks in total, the dual wing movements of the Duomètre range have yet more to appeal to the technically-minded enthusiast.

The Jaeger-LeCoultre dual wing movement is outstanding, but it’s not unique. Take a look at the Konstantin Chaykin Cinema, a watch with a a similar objective to the Duomètre, but the additional complication is not regulated by the same escapement. Instead you have a governor-regulated animation of a galloping horse, projected through a magnified aperture at 6 o’clock! You will notice a more complex series of intermediary winding gears on the Cinema. The ratchet wheel is tall enough for a pair of “Mr. Tickle” clicks to occupy a separate plane to the passenger clicks, allowing the entire configuration to be openly displayed. The Cinema is a visual banquet for the cinephile and the “click-lover” alike. For more on the incredible Cinema see Why Independent Russian Watchmaker Konstantin Chaykin Is A Movie Star.

These are just five of the more exotic clicks out there. Turn your watches over and revisit your favorite case back shots: which clicks do you see and are there any winners that I may have missed?

* This article was first published on September 16, 2017 at The Schmidt List: Top 5 Funky Clicks.

Focus On Technology: Plastics In Watches And Why We Are Likely To See More Of Them