That’s not a clickbait title; I genuinely experienced mixed emotions when looking at the Slim d’Hermès Squelette Lune. I have long been a fan of Hermès: it is one of the few brands that, with its almost effortless-looking design, has been able to create watches that still look contemporary even when they are decades old. The typography alone makes me want to own one.

And a skeleton watch means that I get less of what I love so much about the brand, hence my mixed feelings. So while this may not be the perfect Hermès for me, the brand has created one of the best skeletonized watches currently available. 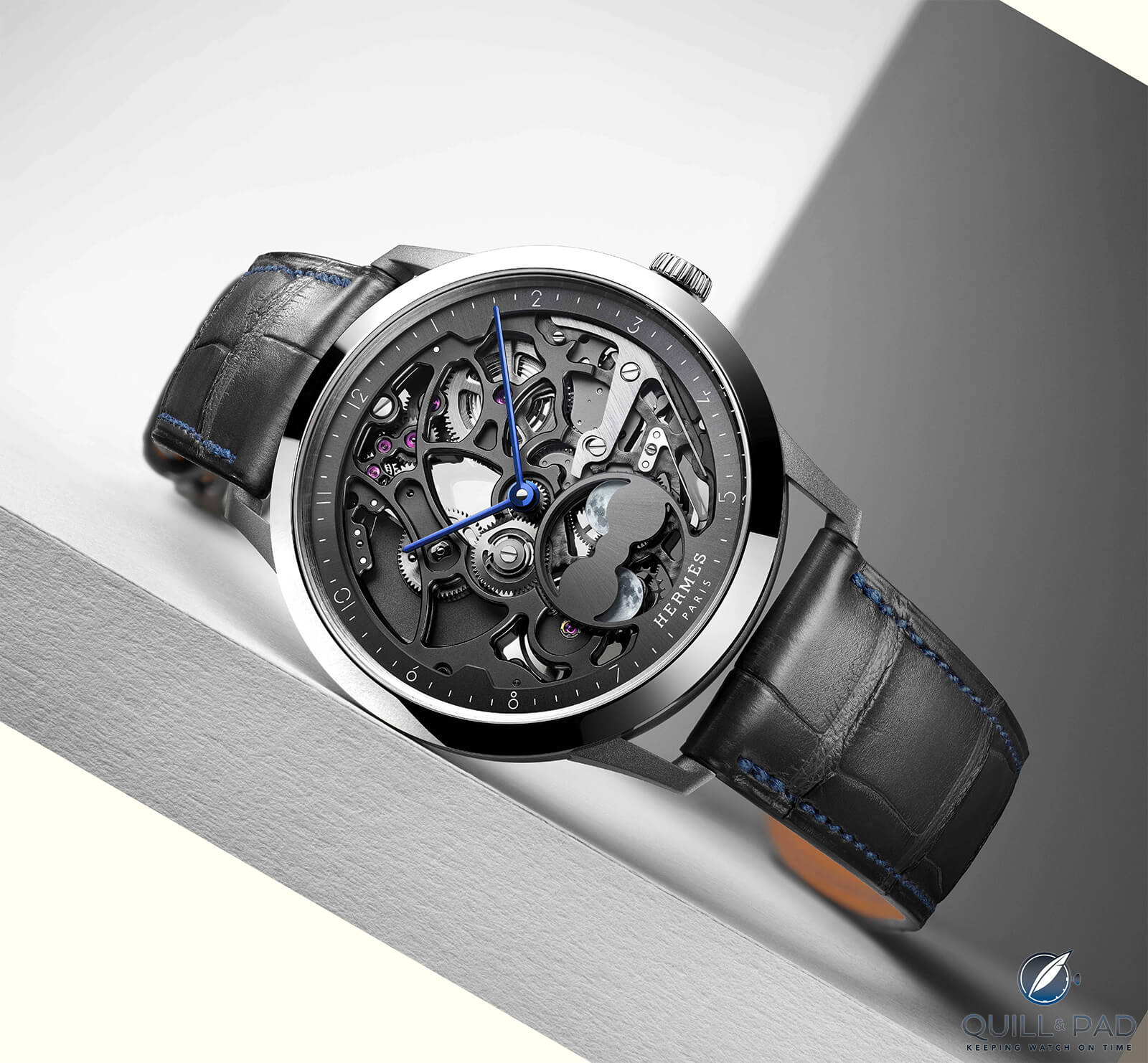 Over the last two decades we have seen the rise of the more contemporary skeleton watch, which is characterized by a sportier touch thanks to a more industrial approach in terms of design (but not necessarily in craftsmanship). The Slim d’Hermès Squelette Lune is a prime example of this as the bridges offer an elegant appeal with their almost organically flowing lines and subtle decorations. The chamfered edges of the bridges offer a play of light in a modern monochrome color setting. This is where the brilliance of Hermès comes into play: the brand has created a true “slim shady.” Thanks to the ultra-thin Vaucher movement – Hermès owns 25 percent of this movement maker – the brand has been able to keep the Squelette Lune’s profile superbly flat. This is an extra treat as the art of skeletonizing such thin movements requires particular skills and comes with a whole new set of challenges.

The “shady” part comes from all the different tones of grey that the brand works with in this watch, which create exquisite tonal differences that make the Slim d’Hermès Squelette Lune captivating to look at while maintaining some of that understated elegance that is an Hermès hallmark. Opting for a case back and case band in bead-blasted grade 5 titanium and topping it off with a bezel made of polished platinum perfectly fits this theme and adds an extra air of sophistication. Poetry in the moonlight

One can argue that it doesn’t make much sense to only have a moon phase as a complication. In the modern age, its practical use is quite limited. But from a poetic point of view, it makes a lot of sense as it brings additional emotion to the timepiece as well as a playful element that also challenges Hermès. Integrating the moon’s phases into a skeletonized watch is challenging as it is hard to bring this display in line with the rest of the design without it losing significance.

Hermès solved this puzzle by going for a somewhat classic window display yet showing the moon phases in both the Northern and Southern Hemispheres simultaneously. This creates a symmetrical focus point on which Hermès capitalizes by opting for real moon depictions on the disks.

This poetic element works remarkably well with the rest of the watch and gives the Slim d’Hermès Squelette Lune a dreamlike quality.

Hermès is also dreaming of winning the Men’s category of the 2022 Grand Prix d’Horlogerie de Genève with this watch. The competition will be fierce as no less than 30 (!) watches are entered in the pre-selection, which is being voted on at press time. This makes going forward into the final six already like winning. Despite fierce competition, I feel that Hermès has an excellent chance of making it there.

My personal preferences aside, one is hard-pressed to find another watch that is so thought through and sophisticated in its design. Combine that with its ultra-thin profile, interesting use of materials, original moon phase display, and skeletonized movement and you have a winner regardless of the outcome at the GPHG.

Hermès Arceau Le Temps Voyageur: Time Traveling Around The World (And A Standout Star At Watches And Wonders 2022)