Artists’ biggest fans are often other artists.; they share mutual appreciation for the effort and passion that goes into their artwork. Yes, there are famous feuds between some artists, but many talented creatives have a library of artists they follow and use as inspiration for various reasons. It could be the style that inspires, or the choice of materials, methods, or even the topic matter. No matter what it is, every artist looks to at least some other creatives with appreciation and enjoyment of their work.

I would argue that to be creative means that you seek out uniqueness in the world around you. I know that from years of working with designers, engineers, and other creative minds I am constantly viewing the world through the lens of product development, aesthetic critique, and a problem-solving mindset.

Now imagine if I had spent the last decade or two as a film director, interior designer, or writer (a different type of writer); I would have very different inspirations for my work and what I find joy in, but I would still look to others and take in their work.

Enjoyment of others’ work is one of the main reasons artists collaborate within their own medium or across artistic fields. Painters work with photographers, musicians with dancers, carpenters with chefs (probably); where collaborations can lead, the sky really is the limit.

One watchmaker who enjoys collaborating with others is Stepan Sarpaneva. In watches, jewelry, auto racing, and visual arts, Sarpaneva has a long history of collaboration with artists he admires or appreciates. As a result, Sarpaneva’s latest release is another such collaboration, this time with Finnish illustrator and comic artist Ville Tietäväinen. Sarpaneva’s new watch is called Nocturne and it is an ode to the night with his massive iconic moon behind a scene designed by Tietäväinen. The Sarpaneva Nocturne is an incredible manifestation of collaboration combined with stunning imagery, and I am here for every minute of it. Sarpaneva Nocturne White Glow Moon on the wrist by day

It was inevitable that Sarpaneva would collaborate with other artists. Stepan Sarpaneva came from a very creative family: his father was a graphic artist and jewelry designer, his uncle a rather famous designer and sculptor, his grandfather (and many generations before) a blacksmith, and his grandmother was a textile artist (which also ran in the family history). His lineage was filled with creative artists, so Sarpaneva was almost destined to see the world with an artistic eye.

His history with watches has spanned more than three decades since he enrolled in the Finnish watchmaking school in 1989, and after spending a decade working in Switzerland, he founded his own brand in Helsinki in 2003. Since then, Sarpaneva has been creating watches in a distinctly personal style while clearly being influenced by numerous sources. 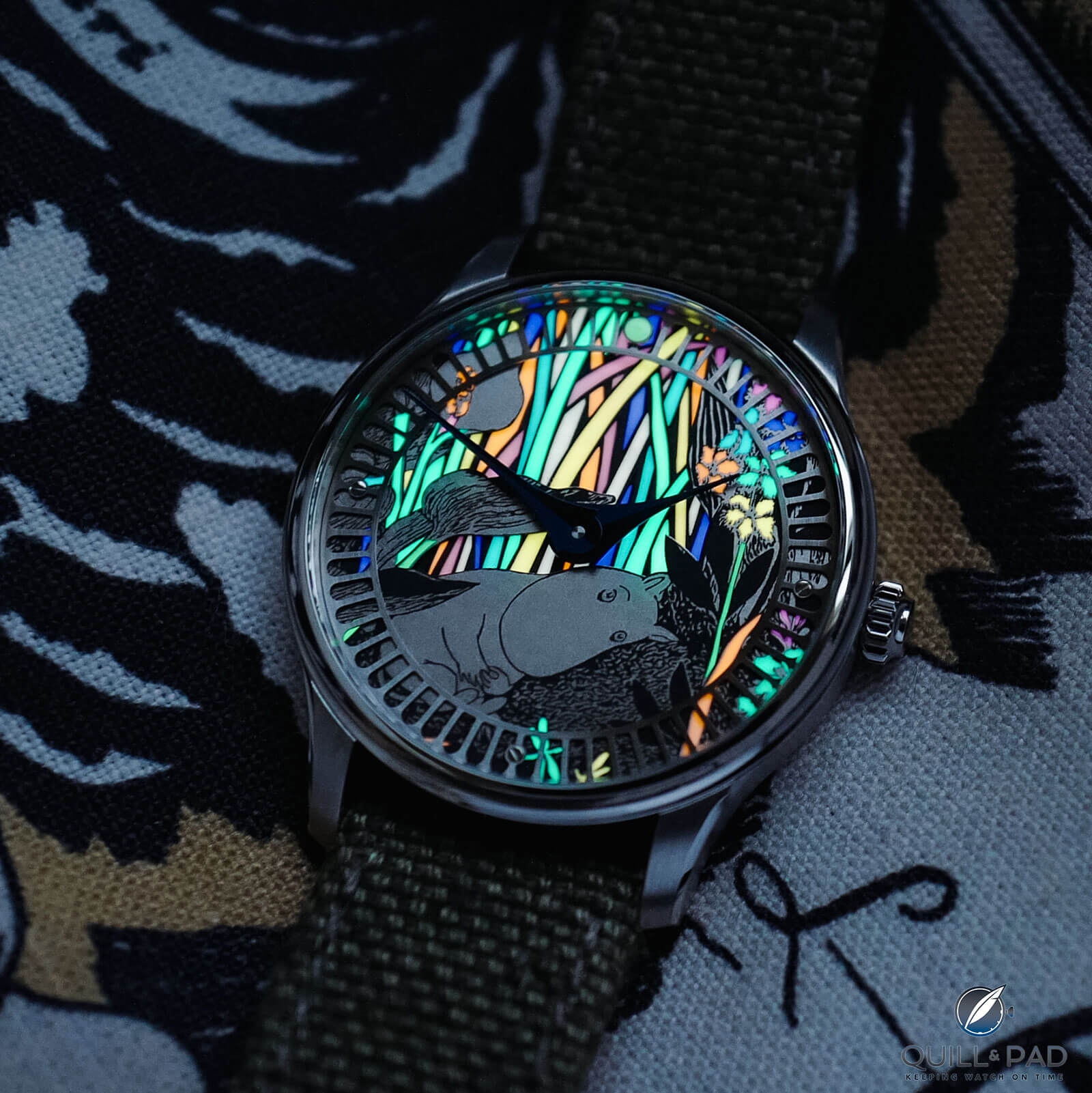 One of the most popular collaborations came from watches that featured the Finnish cartoon character Moomin, resulting in multiple limited editions. It is no surprise then that another illustrator and comic artist would be on deck to create something new, and the result is the intriguing Nocturne. Built around Sarpaneva’s famous Moon Face, the Nocturne takes loose inspiration from the Moomin watches but lets a new artist take the wheel.

Tietäväinen created an almost eerie midnight scene with a stern owl overlooking water while the clouds roll in, with stars and a fiery comet in the sky. The landscape was built around the massive shining moon in the sky just shy of midnight on the dial. A graphic style that looks born from ink illustration, the scene has an emotional weight to it that makes you consider the power that night brings.

There are two versions of the Nocturne: White Glow Moon and Orange Glow Moon, the latter nicknamed “Harvest Moon.” The moons anchor the design and differentiate each model from the other. White Glow Moon represents a crystal-clear night, bright white and bold, giving the watch an airier, light feeling. Orange Glow Moon takes it down a notch with the massive orange face peering out over the owl, turning the dial into the perfect All Hallows Eve timepiece. With moons measuring 11.8 millimeters in diameter (almost three millimeters larger than the balance wheel in the movement), the Moon Face dominates the vibe thanks mainly to the bright hand-applied Super-LumiNova. But it’s not just the moon: the dial is strewn with Super-LumiNova, a total of nine different colors applied to the six different components that make up the dial side. The main background bears the moon and a variety of pierced stars in different sizes. Floating over the top is the moon phase shutter, a symmetrical double triangle pivoting over the central axis that also bears a variety of stars and one fiery shooting star that arcs through the sky, witnessing the scene.

There are two voluminous clouds rolling in, etched on the surface in comic book style with the upward edges pierced with lume to mimic the moon shining off the tops of the clouds. Below the clouds is the water, which is a combination of the etched comic book lines and pierced sections filled with a couple of different blues and some small white sections for the glittering reflections of moonlight. The beautiful glittering night scene accounts for 98 percent of the dial illumination, but the cherry on top is the glowing eye of the owl. A ring of orange with a glint of white, the Super-LumiNova-coated eye stands out among the otherwise unilluminated owl searching for prey in the moonlight, capturing your attention as you meet its gaze. The thematic effect of the scene creates both a very peaceful and slightly troubling feeling, which goes right in line with Tietäväinen’s style.

Best known for his work Näkymättömät kädet (Invisible Hands), which tells a story of “social injustice, illegal immigrants, and globalization,” Tietäväinen has a way of capturing a certain grittiness and stark reality that feels strangely perfect for the Nocturne. It combines with the Moon Face imagery to create a visual that really makes you feel something.

While the scene is the centerpiece of the Nocturne, we can’t ignore the iconic Moon Face developed by Sarpaneva, which perfectly matches his style. Some have called it Nouveau Gothic but I feel it fits more in an Art Deco Gothic style, using repeating patterns and geometry of Art Deco and mixing it with some sharp curves and angles more akin to the gothic style, all with a bit of industrial brutalism thrown in. This allows his Moon Face to bridge the gap perfectly and center every piece that bears it.

The classic Korona case – a longtime favorite of mine – supports this effort, all of which extends to the movement seen from the rear. Built upon a Soprod A10 base with Sarpaneva’s in-house moon phase module, the movement also features a new rotor that covers the entire window on the rear of the case. It is pierced in the same style as many other Sarpaneva pieces, and knowing that the Moon Face has become his icon, this is featured once again in the rotor. Cool rotor detail of the movement of Sarpaneva’s Nocturne

Bifurcating the white gold mass attached to the stainless-steel rotor, the Moon Face is skeletonized with hand-applied lume for the mouth and eyes, creating a private scene just for the owner. That also means that you are never out of sight of the all-seeing eyes of the Moon Face, which I find to be a perfect allegory for the sky (and nature) always watching, never judging, simply overseeing our little, chaotically beautiful lives.

I’ve adored the style presented by Sarpaneva for years, and the collaborations have always been extremely welcome. Now I am crossing my fingers that another project will be in the works with Tietäväinen or another similar artist because these pieces add interesting new layers to the Sarpaneva aesthetic.

The Nocturne is a stunning example of Finnish creativity and collaboration between two very different types of art, though they go together so effortlessly. The Nocturne White Glow Moon and Orange Glow Moon (Harvest Moon) are each limited to 30 pieces and will require a lead time of two to six months to be realized, giving you plenty of time to dream of the Moon Face staring up at you as you go about your daily life. And once the sun goes down and the dial starts to glow, you know you are in a different world altogether.

Now that I gave myself a shiver down my spine, let’s try to break this down!