If you are a #watchnerd, then you are likely quite nerdy about other things as well. This is true for almost every watch enthusiast I am acquainted with. I’ll admit that one of my own other nerdy interests is comic books (but please keep that to yourself).

Which means that the long-awaited recent release of the official Batman v Superman: Dawn of Justice trailer delights me to no end (also: it is nice to see that Ben Affleck might actually turn out be a decent Batman; the few seconds of him seen in the trailer were shockingly good in my opinion). Without further ado, I’d like to call to memory a few timepieces that have commemorated Batman in recent history. Jaeger-LeCoultre actually has quite a history with Batman in the Reverso line. Here I’d like to highlight a very rare Grand Reverso Ultra Thin Tribute to 1931 model in stainless steel from 2012, which was created in time for the release of The Dark Knight Rises.  This was the concluding film in the trilogy of the Dark Knight series of Batman movies starring Christian Bale as the caped crusader and directed by Christopher Nolan. This ten-piece limited edition was presented to Warner Bros. executives involved in the production of the film and was never offered to the general public. The reversible flip side of the case was engraved and enameled with the famous Batman logo. October 2014 marked the 75th anniversary of Batman. Romain Jerome joined in the celebration and released a timepiece that immediately captured my imagination: the Batman-DNA watch.

The styling naturally reflects Batman’s dark and mysterious personality, in particular the 46 mm black PVD-coated stainless steel case. Its black bezel is unusually faceted, and if you look closely you’ll see that it could – with a bit of imagination – recall the contours of the movie-version Batmobile from the Dark Knight series. But it is the edgy dial that really captures its audience as it features Batman’s emblem and, when the lights go down, actually glows like a blue Bat-Signal thanks to a special Super-LumiNova treatment.

For more luxurious glow-in-the-dark timepieces we found at Baselworld, please see Lighting Up With Lume At Baselworld 2015. Sunglasses Advised! The pens comprise materials such as carbon fiber and PVD-coated aluminum that provide them with a dark atmosphere reminiscent of the black-and-white outlook of this very human comic book hero. Their surfaces are engraved with bats in flight (as if they were emerging from the Bat Cave). 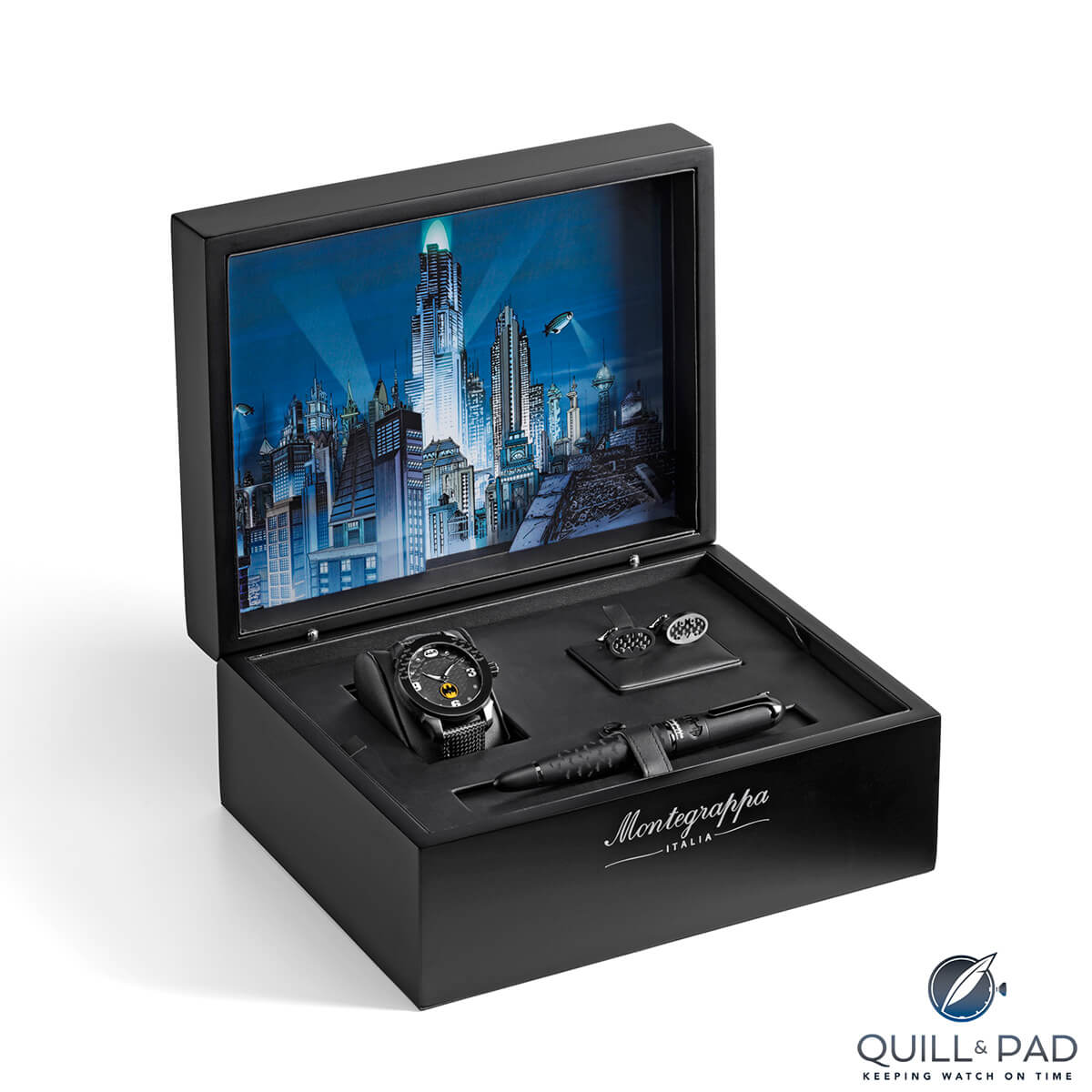 The pens are offered individually or in a set that also includes matching cufflinks and a stainless steel 42 mm quartz-powered wristwatch. The cufflinks and watch are only available as part of the 500-piece limited edition set, which retails for €3,400 with the rollerball pen and €3,900 with the fountain pen. It comes in a fun box decorated with the Batshield on the outside and a photo of Gotham City on the inside.