Quite a few of the supercars launched recently, the Porsche 918 Spyder, McLaren P1, and LaFerrari among them, are hybrids. 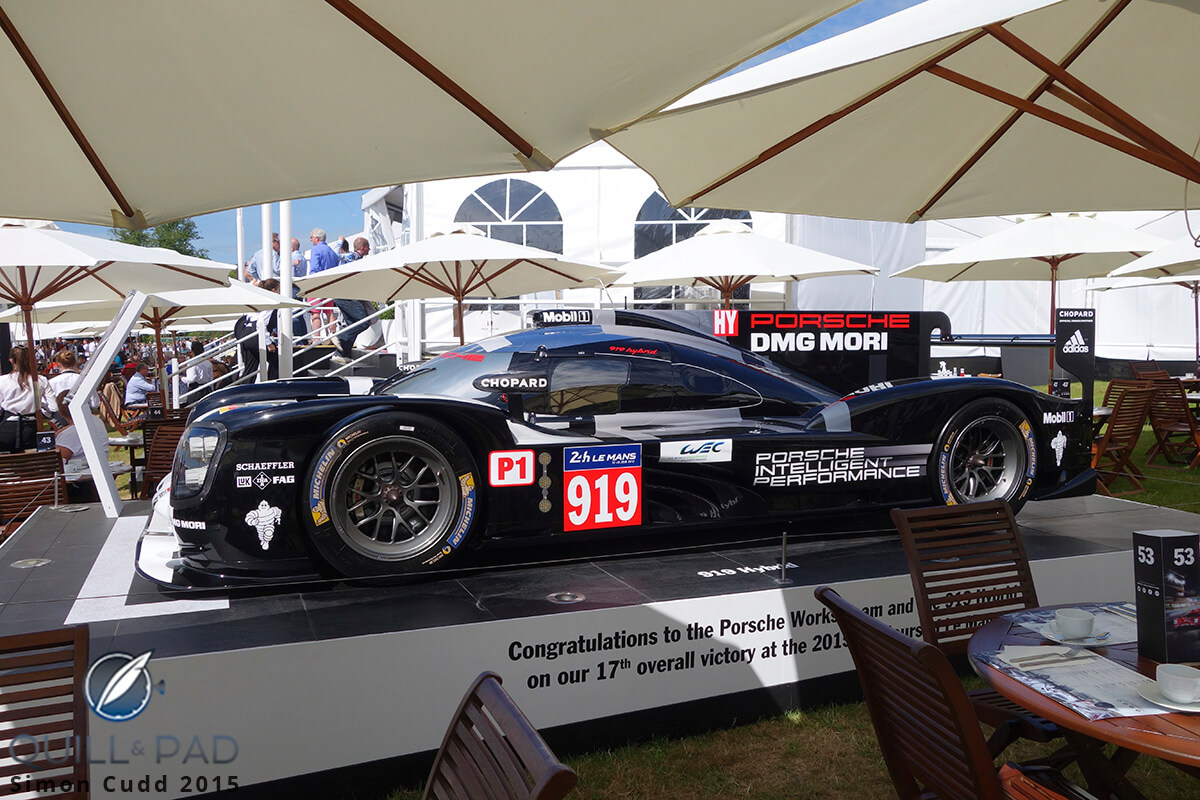 The victorious 919 Porsche Hybrid number 19 driven by Nico Hülkenberg, Earl Bamber, and Nick Tandy from the 2015 24 Hours of Le Mans at the 2015 Goodwood Festival of Speed

The reason is that the electric engine offers something in addition to the combustion engine: a lot of power that is available all at once. This can push these cars even faster from 0-100 km/h and also help them to corner more swiftly.

Hybrids in the watch world are far rarer, but in general perform the same way: a mechanical regulator can only be so precise; however, when you replace the balance with a much faster oscillating quartz crystal to regulate the frequency, chronometric performance improves significantly. For many it was a bit unexpected for Piaget, the “king of ultra-thin watches,” to introduce a hybrid watch like this at the 2016 SIHH. However, the Piaget Emperador Coussin XL 700P did not emerge from thin air; it is the latest in a longstanding legacy of quartz innovation.

Piaget was one of the brands to participate in the development of the experimental Beta 21 quartz movement. I can only imagine that the resulting watch must have felt like horror for Piaget’s designers, who were used to designing some of the thinnest watches in the world and were suddenly confronted with a movement thicker than most of their complete watches. The designers solved the “disagreeable” visual by creating a stepped gold case, the purpose of which was to visually slim down the watch. The result actually looked like a tiered wedding cake: it was not a completely unattractive watch, but most certainly it did not exude the flair and elegance one was used to from Piaget.

It’s no secret almost all the brands involved with 1970’s Beta 21 caliber (which included Rolex, Patek Philippe, Omega, and Zenith among a group of 20 brands) struggled with case design, and many abandoned it quite rapidly. This development resulted in the launch of Caliber 7P in 1976, Piaget’s first manufacture quartz movement. For Piaget this was a logical step since it wanted to be in full control of its designs, which meant that it had very specific requirements regarding movements. Movement side (back) of the hybrid Caliber 700P inside the Piaget Emperador Coussin XL, with the 42-hour power reserve indicator at top right

This particular development contributed greatly to Piaget surviving the Quartz Crisis and over the years establishing Piaget as a quartz powerhouse. When the renaissance of the mechanical watch movement began, the quartz movements faded to the background. However, they never left the collection, and these movements are still largely made by hand at Piaget’s La Côte-aux-Fées factory.

Forty years after introducing the 7P, Piaget takes yet another leap in the further development of the quartz movement; Caliber 700P combines a mechanical caliber with quartz regulation. This electromechanical solution provides the best of both worlds: the soul of a mechanical movement with the precision of a quartz movement. Of course this setup is not new, as Seiko has made several different hybrid movements for its Grand Seiko collection and Autoquartz and Mecaquartz movements have punctuated the landscape inside Swiss cases. But never has it been quite this svelte.

Piaget refers to Caliber 700P as an “electronically regulated automatic caliber,” meaning it is a combination of ultra-thin mechanical movement and Swiss-made quartz regulator. The result is not only a mechanical movement with quartz accuracy, but also a movement less affected by gravity and magnetic fields. Back of the Piaget Emperador Coussin XL 700P

Put that all in the seductive case of the Emperador Coussin and you may have the ultimate watch, one that combines an ultra-slim Piaget movement with stunning manually applied decoration by some of the best craftspeople in the business with the sensible addition of quartz precision. The back of the Piaget Emperador Coussin XL 700P

It actually makes you wonder why people would ever be satisfied with a mechanical watch that lacks the accuracy of this Emperador Coussin XL 700P. In that sense, it is just as revolutionary as the de Grisogono smartwatch we featured in Samsung Gear S2 By De Grisogono: Boldly Going Where No Smartwatch Has Gone Before. It pushes the boundaries of traditional Swiss watchmaking a bit further. But where the hybrid supercars I mentioned at the beginning of this post were embraced rather quickly by connoisseurs and collectors, I suspect that the Emperador Coussin XL 700P is going to be a harder sell. Why? Because many of the watch collectors and connoisseurs so often accusing the Swiss of being so traditional turn out to have a track record of being very traditional themselves.

All the more reason to applaud Piaget for combining hybrid performance with Piaget perfection.