Flying With The Wind In Its Sails: Ulysse Nardin Marine Regatta

Having the wind in your sails is a powerful feeling. It’s an ancient emotion that has been passed down through the millennia thanks to the traditions and memories of seafaring cultures.

The visceral power of the natural world is all around us on both land and sea, but there is something special about being out on the open water with nothing but your nerves and a steady breeze.

I grew up trolling in small gas-powered fishing boats on the lakes of Minnesota rather than manning the rigging on majestic sailboats, so my experience with the topic is limited to a couple of outings. Regardless, the feeling was palpable and contagious, making it clear why the joy of sailing calls to so many.

The adrenaline rush of sailing even beckons some to race, pitting them against man, nature, and sometimes even their own vessels. The wind whispers to these sailors and pulls them to the waves.

The spectacle of sailing races is graceful and beautiful, a constant struggle not to betray to the spectators the extreme effort that goes into gliding across the water.

On the sailboat itself a ballet of power, skill, and technology occurs as sailors combine engineering with nature.

Of course a race wouldn’t be a race without a way to time it. In a regatta, there are many things that aren’t typical of standard races, mainly due to the vessels being powered by wind. As such, a regatta has a moving start that is carefully timed with a countdown chronograph so that every skipper can maneuver the sailboat deftly to cross the starting line at the very last second, not crossing too soon, which incurs a penalty, but not crossing too late, which means starting from behind.

Throughout recent horological history, brands have created regatta-specific chronographs that either run backward from a set starting time to zero or utilize running seconds and a reversed scale displaying a countdown.

These were pretty handy for keeping an eye on the time until the starting cannon fired, but they lacked a key feature: once the races started, these chronographs became useless because they didn’t track elapsed time. The Ulysse Nardin Marine Regatta lives within sailing tradition, but breaks the norm (something this brand loves to do) with the introduction of an actually useful complication for sailing regattas: the bi-directional countdown chronograph hand. It picks up where history left off and in a most welcome way for serious sailors.

The Marine Regatta seeks to finally solve the idle chronograph problem with a single mechanism that can count down from the pre-set race time and then count up as the race gets underway.

The mechanism is ingenious yet not overly complicated.

But before delving into the details of how it works, it deserves a look to be seen in action.

The operation is intriguing to observe as the second hand reaches zero and pauses ever so slightly before starting counting back up for elapsed time. The patented mechanism behind the movement is awesome and works with the “magic” of a planetary differential and a locking lever.

First, the countdown time is set using the pusher at 10 o’clock. Each push increases the countdown time by one minute; inside the movement, a cam wheel rotates away from a locked position. The cam wheel is basically just a smooth, round wheel with an angled notch in the profile.

Along this wheel rides a follower shaped like a griffin’s head (seriously, look at it) that slides into the notch at the end of the countdown. But we’ll come back to that.

First, the countdown seconds are driven through a planetary differential in a bit of a strange way. The basic differential breakdown starts with a center pinion (the sun gear) being powered by the “regular” chronograph mechanism. This pinion meshes with a planetary gear mounted to one of two concentric ring gears. The planetary gear rotates on one ring gear (which is temporarily fixed: again, I’ll come back to that) and meshes with the other stacked ring gear, rotating that gear to drive the countdown seconds via an idler wheel.

As the elapsed countdown time continues, the cam slowly rotates to its final locked position, where at zero the griffin head follower snaps into place and creates a chain reaction. Changing direction: still with me?

This chain reaction is what changes the direction of the second hand, which works pretty cleverly. When the follower snaps into place, a lever attached to it shifts position. This lever rotates another sprung lever that moves in relation to the differential. On the end of this lever is a parenthesis-shaped bridge holding a small pinion on one end and a very fine angled tooth on the other. While the countdown is underway, the lever is in an “up” position, which sees the tooth locking the differential ring gear that holds the small planetary gear.

Because this ring gear is fixed, it allows the differential to function in a way that rotates the other ring gear in the same direction that the planetary gear is rotating, producing counterclockwise rotation of the seconds.

But when the countdown reaches zero, the locked ring gear is released and instantly meshed with the other concentric ring gear via the pinon on the second side of the lever.

When the lever is in the “down” position, meshing the two ring gears together, this stops the previously rotating ring gear from rotating counterclockwise because the planetary gear is now fixed relative to the two wheels.

This makes the two ring gears rotate in the opposite direction and the planetary gear crawl around the central pinion that was driving the entire mechanism in the first place.

The change in direction is due to which gears are fixed and which are allowed to move, as fixing different gears produces different speeds and different rotation directions for the rest of the system. It is an extremely clever way to use a well-known system differently than has previously been used in a wristwatch. The result is something that can be entirely useful for a variety of activities, but shines in a regatta. 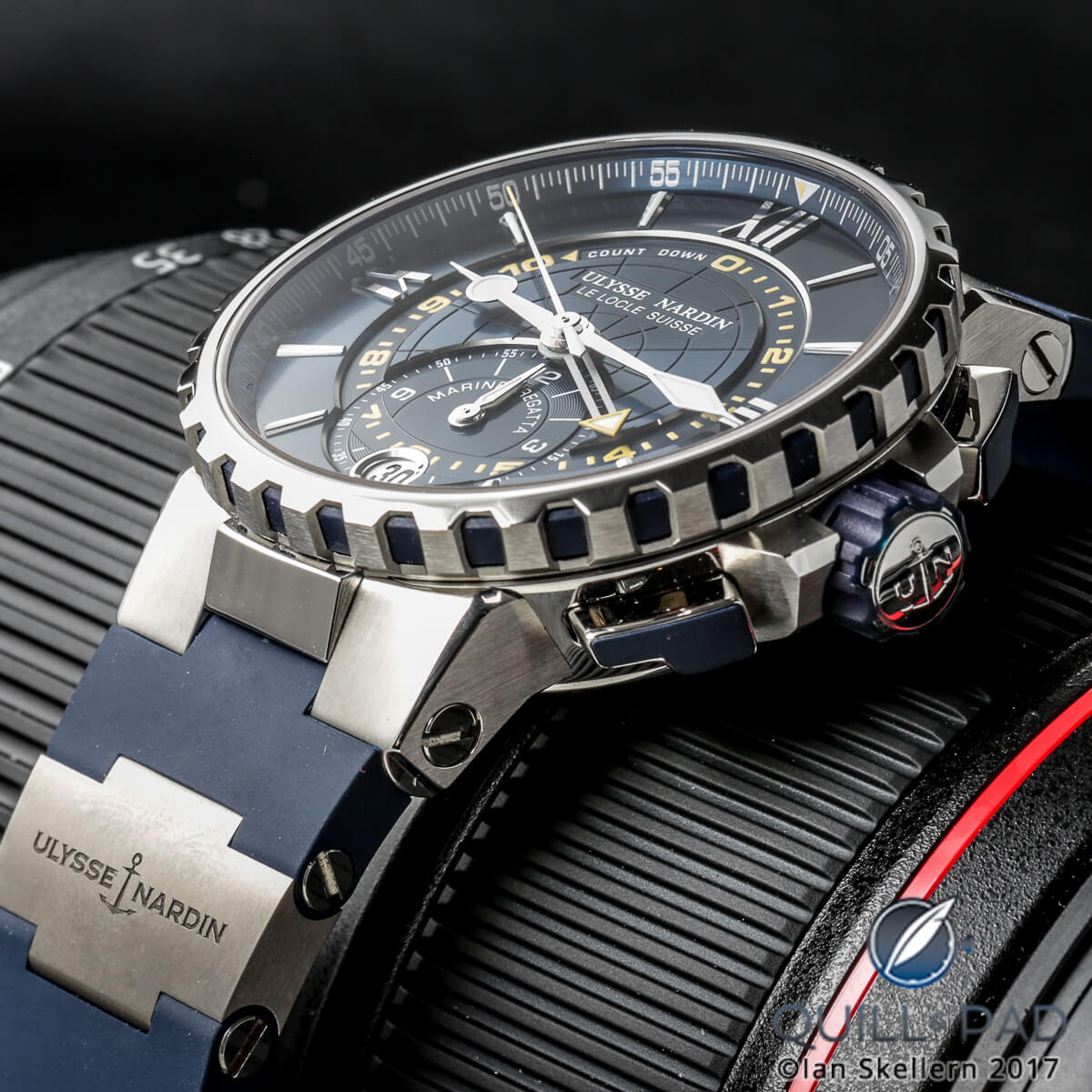 With its rich nautical past, it no surprise that Ulysse Nardin has re-invented the regatta countdown chronograph. The Marine Regatta is a prime example of creating something extraordinary that makes a task better and easier. The Marine Regatta was developed in honor of its partnership with Artemis Racing, a strong competitor in the sailing world and a serious contender to take the 2017 America’s Cup. Team members contributed valuable input to help create a watch that would actually be a useful tool for a racing sailor (see Ulysse Nardin Marine Diver Artemis Racing Watch Race Winner In Bermuda). On top of the regular edition, Ulysse Nardin has also created a special edition limited to 35 pieces that boasts a champlevé enamel engraving of the Artemis Racing boat.

While I may not be a sailor or have a need for a regatta timer to launch my race boat, the resulting mechanism alone makes me want to find a marina and start learning to sail. The clever way that a completely new motion for a chronograph hand was developed is why I love watchmaking so much and why Ulysse Nardin will always hold a special place in my heart.

Hopefully my breakdown of the mechanism and the accompanying imagery sparks a passion inside of you for sailing and/or watchmaking because that movement is incredibly cool and the boat even more so. If you get a chance to see and use one, do appreciate how a second look at a familiar mechanism created a big breakthrough in chronograph technology.

I think I’ll head out and buy some boat shoes for my new life on the water, and while you wait for me here’s the breakdown!