Concentric and coaxial: two terms that are often used when talking about watches, but words that can have different uses based on application and intent. Both words can refer to a common axis (an invisible line running up the exact center) of linear bodies, with the axis sometimes being an axis of rotation.

”Coaxial” refers to multiple bodies that share a common axis. This can be a single structure to which all bodies are attached and rotate around, like a wheel and pinion attached to a single pivot staff. It can also mean a shared point of rotation for multiple shafts that are either stacked vertically (with pivot supports between the shafts) or assembled and rotating concentrically like hour, minute, and second hand staffs.

It may even mean a fixed axis that aligns multiple pieces by a common focus. “Concentric,” however, is a bit different from coaxial: it technically has nothing to do with rotation at all, or even with circles, and instead refers more specifically to a shared center or a consistent distance from a center point or axis.

In this way, a cube and a triangle can be concentric as long as the exact centers of the shapes are in the same point. Objects arrayed radially around a center point (such as hour markers) can also be concentric.

The importance of each really comes down to tolerances (the amount of error allowable in a component).

With parts that rotate concentrically, and most specifically where one is inside the other, the measure of concentricity (and its relative, runout) can cause a component to fail even if the parts are perfectly coaxial. That is because concentricity, the symmetrical measurement of the distance from the rotating axis (how far the outside surface is from center), can vary enough so that the parts collide, bind, or interfere with the other.

A helpful mental image is picturing the difference between a bumpy, irregular cucumber and a straight and smooth rolling pin and how easily they both might spin inside of a relatively sized tube.

This is where very tight tolerances come in and where watches that have multiple hands rotating coaxially and concentrically need to be as precise as possible. Of course a standard three-hand watch does this on a regular basis, but not without great effort and precision. Adding extra indications rotating in the same space increases this difficulty.

But why am I telling you all of this?

Because, for the reasons I mentioned, chronographs usually have the minute and hour counters located anywhere but other than center on the dial, while swapping central running seconds for the chronograph second counter. There are some very cool exceptions, but even they haven’t addressed all the other issues chronographs face.

The holy grail of quick readability for a chronograph is centered, concentrically mounted hands. But doing this increasingly complicates the center stack of indicators and their staffs or requires the gear train to run alongside the center and display the time elsewhere.

Not to mention risk becoming extremely sensitive to shock.

Finally, however, a movement has been created that fixes all of that – not to mention seven other issues plaguing automatic chronograph movements as well.

And it found its first home in the Fabergé Visionnaire Chronograph. Fabergé Visionnaire Chronograph in a ceramic and titanium case

Thanks to Ian Skellern’s comprehensive article, we have an amazing in-depth breakdown of all of the technical feats, design considerations, and mechanical capabilities of the AgenGraphe Caliber AGH-6361 in one place: The AgenGraphe By Agenhor: The Most Significant Chronograph Since . . . Since The Invention Of The Chronograph (With Videos). 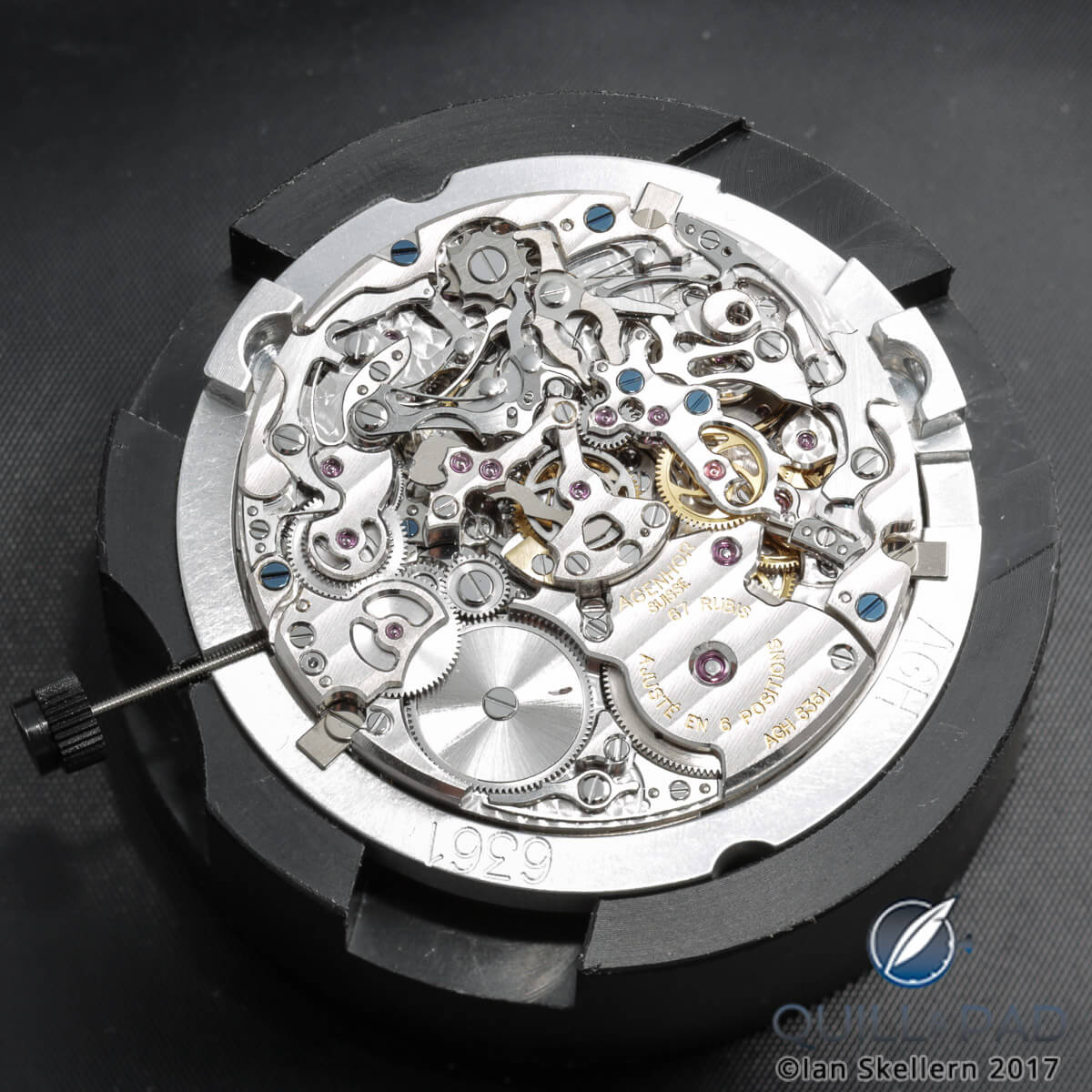 For that reason I won’t dive too much into technical details about the movement architecture and engineering (even though it is so incredibly cool). Instead, I want to focus on the search for an easily readable chronograph and why the Fabergé Visionnaire Chronograph is a fantastic offering in the “new” category of central indicating chronograph counters.

As I was saying before, the holy grail of chronographs is a perfectly and intuitively readable chronograph display.

Now this isn’t the only holy grail of chronographs, but when it comes to layout, readability has been an issue for years. Watch designers have played with dial designs, fonts, spacing, colors, layouts, and even movement architecture in the search for the most legible and egonomic chronograph. But most adjustments to the movements and layout never really succeeded in an ultimately readable wristwatch watch.

What it required was a whole new approach to the chronograph mechanism and how it fits within a regular watch movement. What Agenhor began nearly a decade ago resulted in an earnest attempt to solve every problem from which automatic mechanical chronographs suffer. Fabergé Visionnaire Chronograph in a ceramic and titanium case

Surprisingly, it actually evolved out of an idea for a movement that could be expanded internally (it sounds like an oxymoron, but it works) and therefore be used as a base for a variety of complication modules or artwork additions that do not significantly increase the thickness of the movement.

The Agenhor movement was developed from the outside in, leaving a hole in the center that could be used for any number of interesting things. This peripheral-style movement eliminated the standard central assembly of shafts driving the time display, and as a result created an opportunity to take another look at the chronograph by engineering a module that fits in the center of the movement. A better way to read a chronograph

The eventual solution not only solved numerous issues from previous automatic chronograph movements like clutch stutter, chronometry variations, shock sensitivity, and winding rotor problems (seriously, read Ian’s article to learn all about it), but also allowed for the chronograph seconds, minutes, and hours to be centrally located and concentrically rotating separate from the time indication, creating a perfectly intuitive readoff of elapsed time.

So it only makes sense that the most intuitive way to understand elapsed chronograph time would be with a display that mimics the standard three-hand model rather than having to collate information from separate elapsed time counter subdials.

Given the difficulties of having up to five shafts rotating concentrically, the attempts over the years have been minimal. The relocation of the time gear train and its display created an opportunity for innovation with the development of a module. AgenGraphe Caliber AGH-6361 truly is a remarkable movement with terrifically clever solutions, but the combination of those solutions and the design direction of Fabergé within the Visionnaire collection have made for a doozy of a timepiece. Thanks to the fact that the hour and minute indications are relocated from centrally pivoting to driven from the periphery of the movement, the hands and markers can more easily move away from the now centralized chronograph indications.

The basis of the design began with the Fabergé Visionnaire DTZ, a dual time zone watch featuring a virtually hidden second time zone visible through a magnifying element in the center of the dial. The decorated center plate hides the mechanism for the jumping second time zone, providing a blank canvas for the Visionnaire Chronograph.

The centered chronograph sports three red-tipped pointers for the seconds, jumping minutes, and jumping hour counters. The scales are clearly printed in a sizeable, highly contrasted font to continue the theme of legibility. The rest of the dial is a continuation of the very classy DTZ aesthetic, which provides good readability without being overly bold. The balance between the chronograph center and the time exterior is expertly done, showing that Fabergé understands how to avoid going overboard and let its merits speak for themselves.

The Visionnaire collection has become a testament to why Fabergé makes complicated watches and why it wants to invest in further advancements for haute horlogerie. The Visionnaire DTZ (see Fabergé’s Visionnaire DTZ: A Surprising Way To Display A Second Time Zone) and the Lady Compliquée Peacock (see The Fabergé Lady Compliquée Peacock Emerald Fans Out Into Colorful Gems) have won awards at the Grand Prix d’Horlogerie de Genève for the last two years, showing how outstanding the reception for the brand’s complicated pieces has been.

Given the varied history of Fabergé over the last century after its original heyday (see A Brief History Of Fabulous Fabergé Eggs), the brand seems to be reaching back to its roots in creating objects that inspire and amaze.

The lost Fabergé Constellation Egg is partly the inspiration for the release of the Visionnaire Chronograph as well as a commemoration of the legacy with which Fabergé became a household name across the world.

Historically, jewelry and fashion brands that make their way in the world of fine watchmaking like Van Cleef & Arpels, Graff, and Cartier (the last of which has actually been creating inspirational watches) have their work cut out for them as Fabergé continues to invest and take risks on creating stunning timepieces alongside some of the best brands in the industry. In addition to the movement itself, the Fabergé Visionnaire Chronograph is a watch that deserves to be recognized in its own right for the contributions has made to the future of watchmaking. While some brands are playing it safe, other relative newcomers are pushing their own boundaries as to what is possible and what is fun.

And the results are rather impressive. Fabergé Visionnaire Chronograph ceramic and titanium on the wrist

The partnership between Fabergé and Agenhor definitely bodes well for both companies – and for all watch aficionados clamoring for the next awesome thing. Given that AgenGraphe Caliber AGH-6361 is at its core a modular movement, I expect the next developments utilizing that base movement to be stupendous to say the least, and I am fairly certain Fabergé will have something up its sleeve as well.

In the meantime, how about a breakdown!