How I Bid: One Collector’s Approach To Buying At Watch Auctions

The autumn auction season is upon us!

From Hong Kong to New York to Geneva, eager bidders will soon have the opportunity to bid to their hearts’ content on a large variety of contemporary and vintage timepieces; sellers will collect cash they can put into other watches or invest elsewhere; and auction houses will generate tidy commissions to finance their operations and, I suspect, pay for a few nice holiday gifts. And there’s no shortage of tasty pieces on offer at all price points at the big auction houses during this 2017 season, from Paul Newman’s Paul Newman Rolex Daytona at Phillips to the wealth of unique Only Watches at Christie’s to a variety of MB&F specialties at Sotheby’s.

Like many collectors, I’ve bought and sold a number of watches at auction over the years. Since I’m a systematic type of guy, I’ve taken the time to analyze my philosophy of auction bidding and capture some of the tactics I use to achieve my goals; and I hope that at least some of my realizations will be useful to you in your own bidding.

As with a great many human pursuits, the appropriate methods for bidding at auction depend on what one is trying to achieve. It stands to reason the approach taken by a win-at-any-cost buyer with deep pockets who calls out “One hundred!” when the next bidding level is fifty is, and should be, different from that of the bargain seeker who keeps as low a profile as possible and enters the fray with a single bid just as the initial wave of enthusiasm in the room has ebbed. While my early auction buying may have been somewhat indiscriminate, my underlying philosophy of auction buying these days looks something like this: While some of my resulting tactics are specific to this philosophy, others probably apply just as well to the buyer looking for a few “fun” pieces or the hyper-focused bidder aiming for a single grail. That said, if let-҆er-rip spontaneity is your underlying model, you and I are probably going to use quite different methods!

It’s always a happy day when an auction catalogue arrives in the mail, as each assortment inevitably contains one or more pieces I’d love to own. At the same time, as I’m now in the “selling to buy” mode (see Selling Watches To Buy Watches: One Collector’s Story) each auction requires some soul searching: are any of those shiny watches so tempting that I’d be willing to part with something already in my collection to own it?

With that tough screen in mind, I’ll now often read through entire catalogues and dog-ear a few pages but ultimately decide that none of the watches are for me. From time to time, however, an excellent example of a longtime object of desire simply jumps off the page at me, at which point there are only two questions: is it attainable and if so how important is the watch to me? Even at this stage I make a point of reviewing the online condition reports and scanning the photos of each potential target closely: having bought a watch at auction years ago that required substantial servicing, I hope I’ve learned my lesson.

If you can, see and handle the watches in person at the previews! The first reason to do this is that as a registered bidder you will have the opportunity to touch, wear, and photograph a rich assortment of notable watches that puts the new releases at a given year’s SIHH or Baselworld to shame.

When I mark up my catalogue, in addition to the pages marked “B” for buy and “C” for consider, there are always a bunch labeled “L” for look. For the “buy” and “consider” pieces, though, careful inspection (including opening the back of solid-cased watches) and detailed discussions with the helpful members of the auction house team give you an advantage in understanding just how good a particular example is.

There’s also a bit of a hazard, of course: the risk of falling in love with a watch on the “look” list!

I had this experience with my Patek Philippe Reference 1526 perpetual calendar: once I had it in hand, on the wrist, and under the loupe I took a crash course with my friends at Phillips and Patek Philippe and ended up buying a watch that is now one of my favorites (see A Contemporary Watch Collector Goes Vintage). Loved it, researched it, bought it: the author’s Patek Philippe Reference 1526 in pink gold

I wouldn’t go so far as to say that I would not bid on a piece I haven’t seen in person, but I’m a big believer in the value of in-person inspection and questioning.

If you are interested in a particular watch, do your best to make it known to a member of the auction house staff. Contrary to what I believed when I first started bidding at auction, there are generally only a small number of bidders for a given watch, and as part of the detailed preparation that the auctioneer goes through he or she will want to understand who the likely bidders are.

To the extent that you are in the room and the auctioneer is aware of your interest, you might just edge out another bidder whose hand goes up as your does but just out of the auctioneer’s peripheral vision. At least in Switzerland, there are hussiers present to ensure fair dealing, but in my experience ties go to the prepared. Fair warning, fair dealing: auctioning the Patek Philippe Only Watch, 2015 with Aurel Bacs at the rostrum and the hussier seated to his left

If you can’t be in the room, arrange to bid by phone; your auction house representative on the other end of the line can help you read the mood in the room, answer questions, and even buy a bit of time with the auctioneer that the “bid now” button on the internet app doesn’t provide.

Be aware, though: what can seem a glacial pace of bidding in the room seems mysteriously to shift into hyper drive when you are on the far end of a phone line, so having a clear bidding strategy is critically important.

Given my bidding philosophy and somewhat poor impulse control, I try to go into every bidding session with a clear game plan for each watch I’ll bid on that includes:

You can see a mocked-up example of this approach in the photo below for a watch that I don’t plan to bid on at Sotheby’s upcoming Hong Kong auction. In this hypothetical example, I’d be pleased to go home with the watch at an all-in auction price of $64,000, which corresponds to a bid of HKD 400,000 – within the estimated price range for the watch. If I’m in the room or on the phone and I have the opportunity, I try to get into the cadence at an even number of bids below what I am willing to pay, or if the bidding that evening has been a bit soft overall perhaps one slot lower.

That would leave me vulnerable to someone else raising the ante to my top number of 400,000, but then again there are a lot of Reference 5070Rs out there so the loss wouldn’t be so hard to take.

In this made-up case, 320,000 could also be a good number as the reserve is sometimes one bid below the low estimate. At last year’s Phillips auction in Geneva, bids “one below” were good enough to win me both the Patek Philippe Reference 1526 and the A. Lange & Söhne Pour le Mérite Tourbillon. 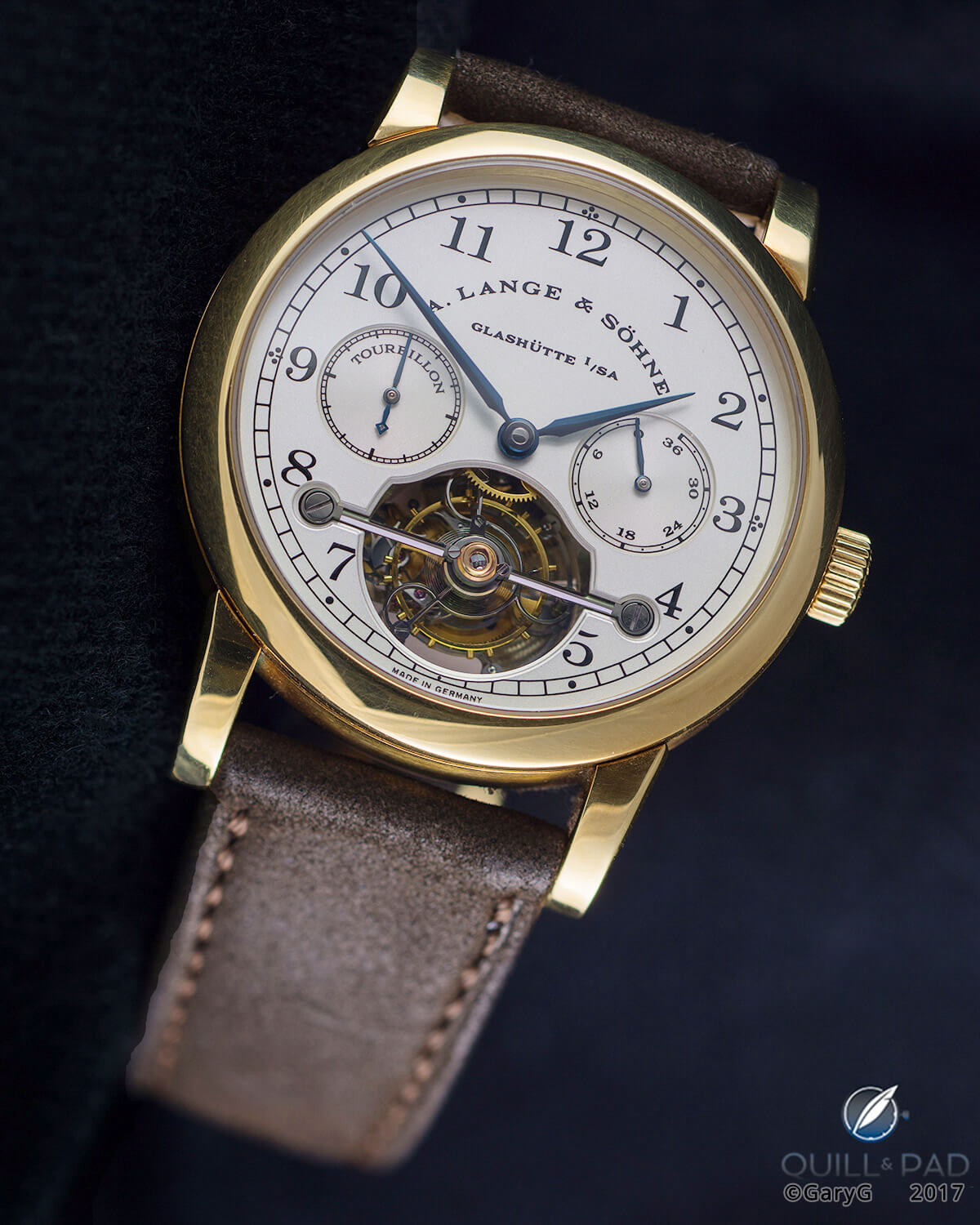 Of course, this strategy doesn’t always work. Auctioneers have latitude to take bids that are not on the published increments, and there have been many occasions on which I’ve been wrong-footed and seen someone else go home with “my” watch, having been at the correct spot in the cadence to bid my targeted top price.

If you must absentee bid

If you can’t be there in person and can’t bid on the phone or Internet, there’s always the absentee bid process that allows you to place a maximum bid amount in advance.

One advantage of the absentee process is that it eliminates the possibility that you’ll be caught up in the excitement of the moment, but at the same time you’ll lose any chance of influencing the flow of bids and you’ll give up the chance to make “one more” bid at the margin.

I try to use absentee bidding only on those rare occasions when there’s a “nice-to-have” watch being auctioned in the middle of the night my time. My guiding rule in these instances is to think very hard about the following question: what’s the price at which, if I won, I’d be delighted to wake up to the news? Parting shot: the author’s A. Lange & Söhne Double Split, bought at auction in 2012