Ultimate Toys For Watch Lovers: Both Form And Fun Follow Function In These Follies By Jaquet Droz, Urwerk, And MB&F

The lines between form, fun, and functionality have been blurry, especially in recent years.

After the mechanical watch entered an era of renaissance following the quartz crisis, it did so under a new set of rules. While it would have been preferable for mechanical movements to display accurate time – even the most expensive mechanical watch could, and still cannot, outperform the cheapest quartz watch – so the importance of other aspects of the mechanical were elevated over absolute precision.

High-end watch brands started emphasizing how mechanical movements were made – hand vs. machine – craftsmanship, complications, use of materials, artistry, and overall design. What used to be the unremarked details of a practical everyday object with one primary function, to display the accurate time, became highly desirable traits in a wearable piece of art.

This changed the watch world, but also the timepieces that it produced.

This is still evident today, and very clearly put on display at Baselworld 2018 where several distinguished brands introduced what can best be described as the ultimate toys for watch lovers.

Sign your name across my heart: Jaquet Droz Signing Machine

Very high on the “nobody needs this, but everybody wants one” list is the Signing Machine by Jaquet Droz.

As part of the brand’s 280th anniversary celebrations, the Signing Machine pays tribute to the automatons that are at the heart of the legacy of Jaquet Droz. A beautiful case contains a pen and a mechanical machine. To use, the pen is placed in a holder and upon pressing “play” the machine signs its owner’s autograph (or other text) on a piece of paper. The smoothness with which the Signing Machine does this is remarkably fascinating to watch. It took Jaquet Droz four years to develop this mechanical marvel, and examples are only made on request.

The reason for this is quite obvious: it is a very personal device containing the client’s own signature. A cipher lock reduces the risk of unauthorized use. Jaquet Droz developed the Signing Machine to write in any known language, from Mandarin to Arabic and from Russian to English. And if the owner prefers it to scribble a little landscape, that is of course possible as well. For those who think that the Signing Machine by Jaquet Droz is a bit too understated to match their personal styles, rest assured that customization is on the order of the day. Harry Winston, Jaquet Droz’s Swatch Group sister brand, even released its own version set with generous amounts of blue opals and diamonds. The Harry Winston version is called Precious Signature.

The future is atomic: Urwerk AMC

Sorry to disappoint if you thought Urwerk had made an homage watch to the cars of the American Motor Company: AMC instead stands for Atomic Master Clock. And with this device, Urwerk takes mechanical watchmaking to the next level with a wristwatch being automatically set with the precision of an atomic clock. By an actual atomic clock built into the case. Urwerk AMC: the wristwatch sits near the center on top Urwerk AMC watch movement through the display back

While this is impressive in itself, what makes it really special is that the entire movement is created to be manipulated from the outside by another machine. This machine contains an atomic clock as well as a cradle for the AMC wristwatch. When inserted and started, the mechanism both winds the wristwatch and sets the correct time, as well as adjusting the rate when needed.

Of course, the AMC represents a tremendous amount of effort and technical dexterity, not to mention a hefty price tag, to solve a problem that also has a cheap and equally effective answer in the shape of thermo-compensated quartz or radio-controlled watches. The beauty of the Urwerk AMC is found in the combination of technological elements allowing a mechanical watch to function at an unprecedented level, which has only become possible thanks to the passion of Urwerk founders Felix Baumgartner and Martin Frei.

For a more in-depth look at this remarkable watch, check out Ian Skellern’s article Urwerk AMC: Atomic (Clock) Mechanical Control Is A 21st Century Version Of Abraham-Louis Breguet’s Sympathique Clocks But Much, Much Better (Geiger Counter Not Included).

MB&F and the importance of having cool friends

Maximilian Büsser has already put the importance of having cool friends in the watch world on display. Over the years, these friendships have helped result in the most amazing watches – and, thanks to L’Epée, also clocks.

This year the two brands partnered up again, introducing The Fifth Element, which to my thinking makes a clear case for both time and weather being controlled by aliens. And The Fifth Element does so in the quirky yet functional style we have grown so accustomed to in MB&F’s product lines.

A “mothership” offers room for three weather-related devices in addition to a time pod: a thermometer, a hygrometer, and a barometer. These elements shaped like pods feature highly domed crystals. They can also be taken from the mothership and positioned individually. The Fifth Element by MB&F and L’Epée

This is one of the reasons why I believe that MB&F has always been such a success: in all its quirkiness, the products are not only well made and exceptionally finished but also remain highly practical.

And, yes, there is also a clock, beating away in the middle of the mothership. Here you can both easily read the time and admire the beautifully decorated eight-day mechanical movement crafted by L’Epée. 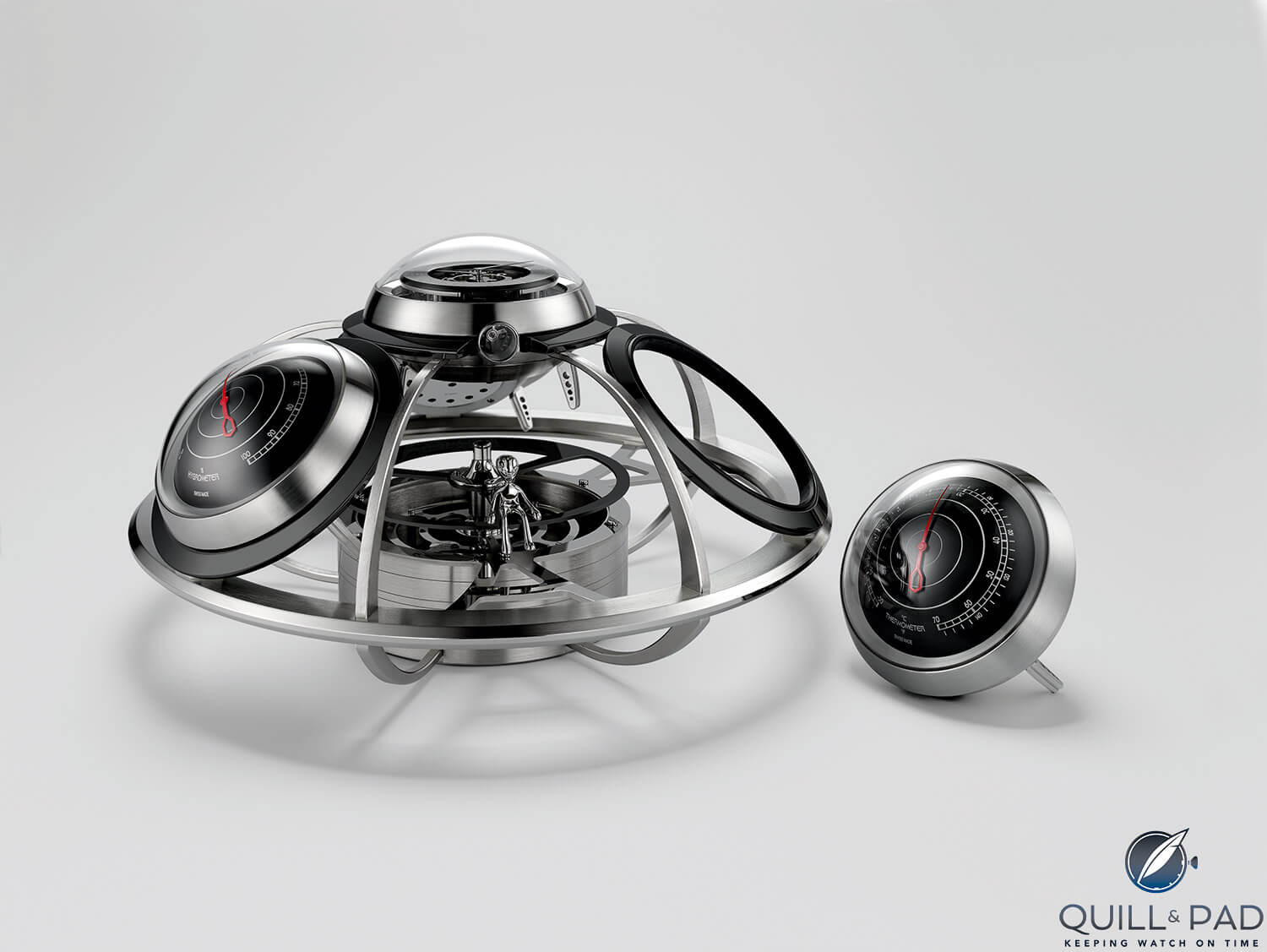 The Fifth Element by MB&F and L’Epée

The mothership itself also features a mechanical movement, but this one only powers the ring on which Ross, MB&F’s honorary alien, sits dreaming of distant planets or better weather.