Rigid, dense, defense against the world,
A constant partner no matter the travels,
I shape who you are, what haircut you wear,
But do not fret; you still have free will.

A cage of white to protect the grey,
Betwixt the ears, behind the nose,
I stand guard over existence,
All while you pen prose.

You sit and you ponder
“Am I here, do I matter?”
As if the questions are meaningful,
Especially the latter.

I am part of a whole,
Yet arguably greater,
Than fingers or toes,
Or the knee or the femur.

I protect who you are,
Everything you have known,
The content of your secrets,
And I’m only just bone.

With you till the end,
I, alas, am only you,
I follow to grave,
Where only worms will know me true.

The skull is one of art history’s most referenced objects, probably because it has such a powerful ability to instantly remind us that we are only flesh and bone and to dust we will return. There is hardly a more sobering thought than that of our own mortality, so the skull is often used as a symbol to remind us to stay humble and focused on appreciating the life we have.

If you didn’t realize what my (rather clumsy) poem was about, I was discussing the nature of our relationships with our own skulls in an attempt to help us remember what is just under the skin on our heads. When we look at ourselves in the mirror we forget that what we see is simply a result of muscle and bone; without our skull, we could not exist as we do. It really is an extremely important part of the lives we live, whether we consider it or not.

Some understand this and celebrate the skull as the life-giving object it is. One creative woman who has defined a genre of watchmaking with the skull is the fabulous Fiona Krüger, who has been making incredible skull-shaped timepieces since 2013.

Krüger has now partnered with renowned Swiss clockmaker L’Epée 1839 to produce Vanitas, a skull-shaped clock based on her Skull Collection. It is sure to be a favorite among collectors.

Krüger, though Scottish, spent part of her childhood growing up in Mexico City and has a strong connection to the Dia de Los Muertos (Day of the Dead) celebration. In this celebration, families gather to honor and remember the dead, helping them with their journey to and in the afterlife. The skull, along with entire skeletons, feature prominently in the festivities, including parades of skeleton puppets and people painted to look like stylized skeletons.

It makes perfect sense that with fond memories from childhood and a respect for tradition that Krüger would choose to honor the skull with a collection of watches based entirely on them. Fiona Krüger Vanitas on the wall

But skulls also have a history in clock and watchmaking as well as art, so Krüger’s background in fine art adds even more layers to her designs and reverence.

The name for the Vanitas clock actually comes from a style of visual art popular in medieval and renaissance times: a vanitas was a depiction of mortality, usually using symbolism to accomplish its goal.

The most widely known styles were still-life paintings featuring skulls and other symbols of death, time, and change. Naming the collaboration Vanitas was a nod to the history and importance the skull has in art and expression. Vanitas: the coolest and (not really) scariest clock around

The clock was developed from an L’Epée 1839 gear train that was transformed and expanded to take on the structure of the skull and add some details unique to this design. But unlike a real skull, Vanitas is packed with mechanical goodies to discover while you are questioning the meaning of life – or checking the time. It’s really up to you.

The main plate and all the bridges combine to create a three-dimensional skeletonized (seriously, no pun intended) skull shape with plenty of spaces to view the inner workings. The movement features five spring barrels working in series to give the clock 35 days of power reserve.

Two of the barrels are mounted in the eye sockets with the arbors positioned to act as “pupils.” Two more sit in what might be considered the cheekbone hollows, a feature typical on anatomical skulls. Fiona Krüger Vanitas with regulator at the top

In the center of the forehead is an outward-facing balance assembly, one of the main departures from the typical skull shape Krüger uses in the wristwatches.

While I do appreciate accuracy to a theme, I think the aperture in the forehead of the skull to display the balance and escapement is a great bonus for such a wild design that could easily have focused on style over horology. The opening also helps you follow the gear train from the balance back to the centrally mounted hands.

Below the hands is the nasal passage area, which leads you to the power reserve gear train above the mouth. The mouth is another departure from the wristwatch skull collection as the clock’s mouth acts as the power reserve indicator. When the clock is fully wound, the mouth is closed and the “mandible” is at its highest point. As the days go by, the mouth slowly begins to open with the jaw dropping away. The motion is the clock “yawning” as it gets tired and needs more energy. The mouth opens up to 18.5 mm when it is fully unwound. That motion is where you really get a sense of Krüger’s playful attitude as a designer and as a person. “Death yawning” is such a ridiculous thought to bring to an artful conversation about expensive timepieces. And, yet, even though it’s fun, the mechanics behind the mouth’s movement are as serious as possible: the mechanism for the mouth power reserve indicator was actually a major sticking point in the development of the Vanitas.

L’Epée 1839’s engineers went through a number of prototypes and ideas before reaching the solution that ultimately made it into the finished clock. A snail cam slowly allows the jaw to drop as the mainsprings unwind, but after a certain point the jaw is blocked from any upward movement from a possible jolt during moving.

Around the edge of the snail cam is a protruding finger that captures the lower jaw as a safety measure. Obviously as the clock is wound, the cam rotates in the opposite direction, freeing the jaw. The jaw itself pivots on a set of arms mounted to the rear of the movement. The entire power reserve mechanism consists of many gears, arms, and pivots for what appears to be a “simple” indication.

But this tricky mechanism didn’t stop the rest of the clock from being fun and cheerful despite the subject matter. 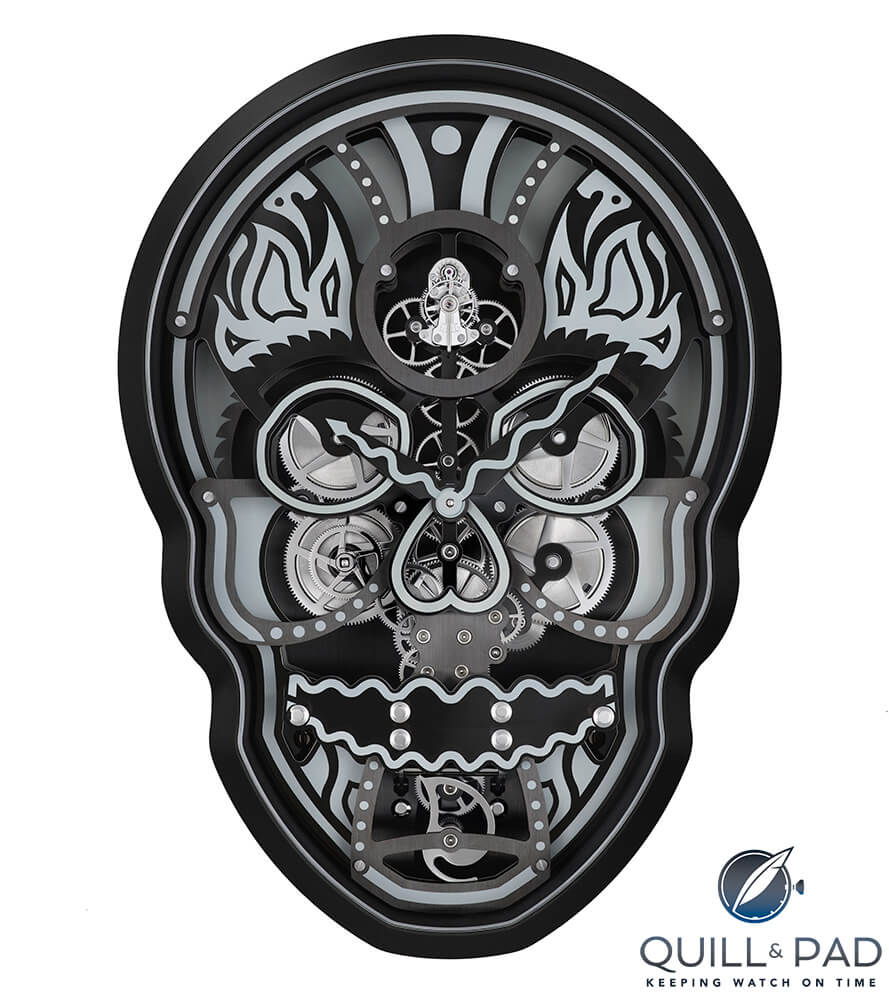 For those who like their skulls a little less adorned, the Fiona Krüger Vanitas also comes in black-and-grey tones

Every surface is finished with a variety of techniques, and the plates and bridges all feature screen-printed ink details, grey and white for one edition, multi-color for the other edition. The polished and brushed surfaces combined with the printing make for a very dramatic face to the clock. When all of that is combined with a case that follows the shape of the skull as well, the final object is nothing short of incredible. 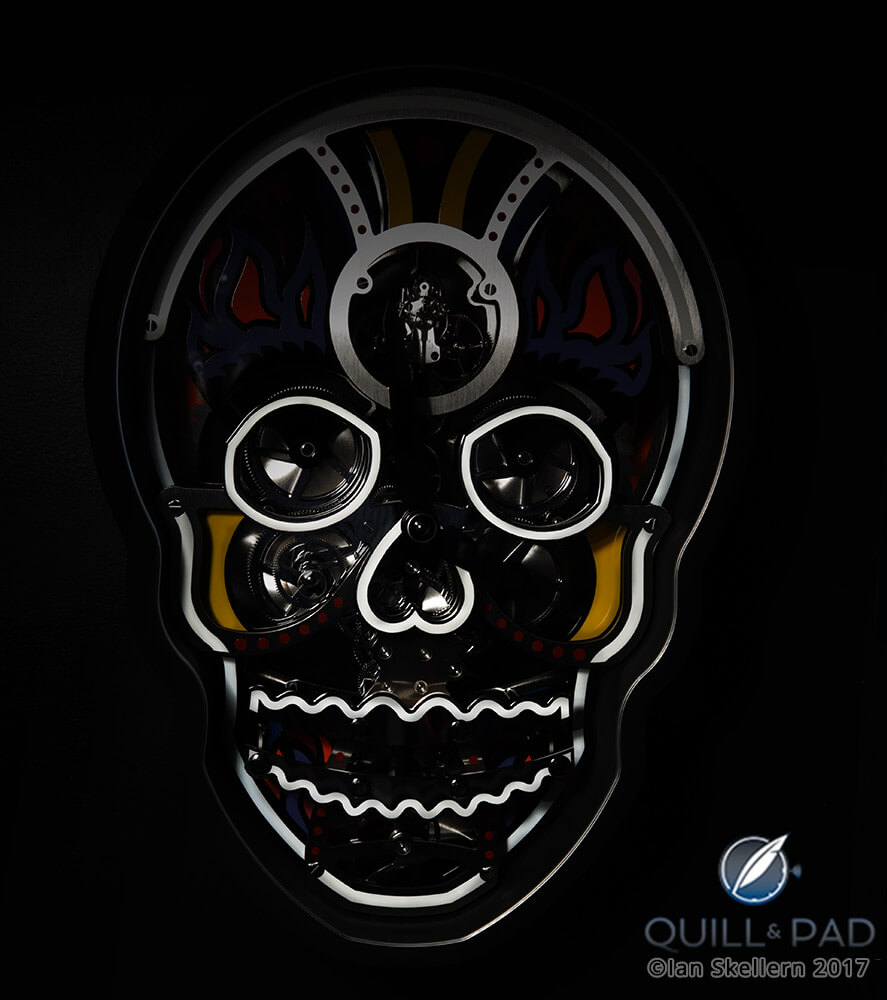 Even in the dark, Fiona Krüger’s Vanitas lets you know it’s hungry (needs winding) thanks to the playful lume

Given the superb quality of L’Epée 1839 and the fantastic design sense of Krüger, the Vanitas shines as an horological object and an art piece commenting the nature of mortality. The design may not be for everyone, and I like that.

Fiona Krüger doesn’t water down her own style to sell watches, so why would a collaboration with L’Epée 1839 result in anything short of tremendous? When I first saw Vanitas in the metal it was a complete surprise. But unlike some divisive pieces I’ve seen before, this clock immediately stole everyone’s hearts. Of course I was too enamored to actually reflect on my eventual demise while viewing Vanitas, but if I have the chance to meet it again, I am sure there will be a whole range of new thoughts in my mind. Until then I will just have to live with my memories.

Oh, and of course the breakdown…

* This article was first published on June 11, 2017 at Fiona Krüger’s Vanitas Is A Skull Clock That Yawns To Indicate Becoming Tired And Needing More Energy. Photo Caption Competition No. 17: A Piratical Eye For A Sword